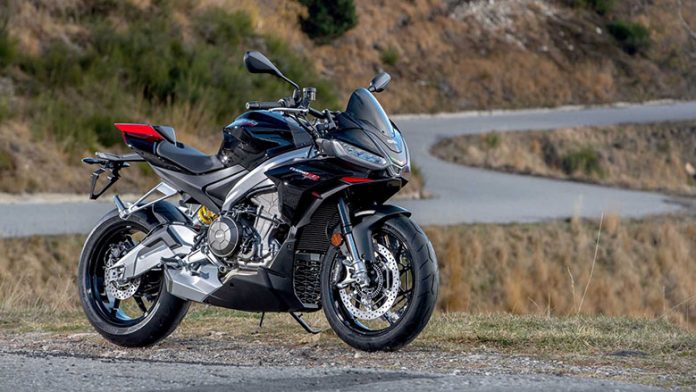 Aprilia’s Factory models have always been the company’s top-of-the-line offerings, intended for the most discerning riders with the highest standards and an appreciation for the finest materials and craftsmanship. 2022 Aprilia Tuono 660 Factory Sports Motorcycle trim is now available, making it the most energetic, efficient, and exciting to drive on the road, as well as a natural emotional generator for everyone. Aprilia’s 660 project promises motorcycles with an incredible weight/power ratio that are lightweight, high-performance, and based on the brand new Aprilia parallel twin. 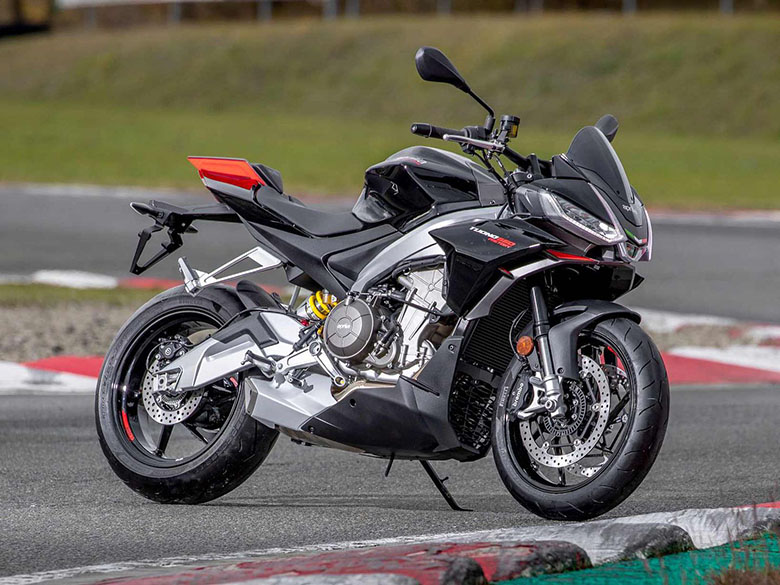 The Tuono 660 Factory features a more advanced suspension system than the standard Tuono 660, extensively praised and acclaimed by the public and motorcycle journalists alike for its remarkable chassis attributes. In terms of compression and rebound damping and spring pre-load, the Kayaba fork with 41mm stanchions is entirely adjustable. At the same time, the Sachs shock with a separate reservoir is likewise flexible.

The Tuono 660’s already exceptional weight/power ratio has been further improved owing to the adoption of a light lithium battery that helps to decrease the total weight by around 2 kilograms (the curb weight is now 181 kilograms) and more excellent engine performance, making it even lighter.

To create a new, more compact, and lighter version of the 660cc forward-facing twin with DOHC timing and four valves per cylinder, engineers drew on their previous expertise building the potent RSV4 engine. The aluminum swingarm is housed in the rear portion of the engine, which also serves as a load bearer. As a result of the asymmetrical combustion, offset by 270 degrees, the engine’s performance and sound are reminiscent of a V-twin. The shorter final drive, which has a 16-tooth pinion gear instead of Tuono 660’s 17, gives the engine even greater drive-in acceleration. At 8500 rpm, the maximum torque is 67 Nm, with 80 percent available from 4000 rpm or 90 percent when the engine reaches 6250 rpm. 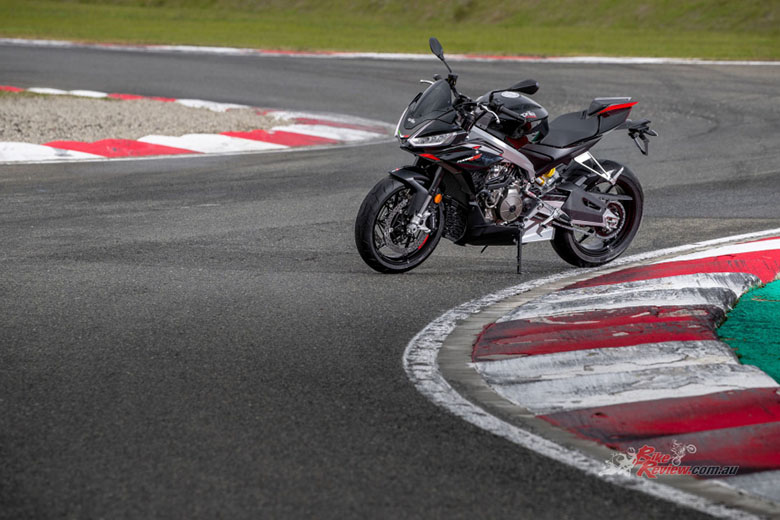 The Tuono 660 Factory comes fitted with a Ride-by-Wire electronic accelerator and a six-axis inertial platform. Accelerometers and gyroscopes in this device allow it to monitor how well your motorcycle is aligned with your path, delivering data to a central control unit that makes adjustments to help you ride more safely and efficiently. In addition to ATC (Aprilia Traction Control), AWC (Aprilia Wheelie Control), ACC (Aprilia Cruise Control), and AQS (Aprilia Quick Shift), the Tuono 660 Factory features an electronic gearbox that allows for very rapid shifting without closing the throttle or the clutch, as well as traction control and wheelie control. AEB (Aprilia Engine Brake), an adjustable mechanism for controlling engine braking when the throttle is closed; AEM (Aprilia Engine Map), which has several mappings with which to vary the engine’s character and delivery; and the downshift function are all included.

Multi-map Cornering ABS is also available on the Tuono 660 Factory. Since it is light and small, the system can better control brake and ABS intervention in corners thanks to an algorithm that constantly monitors a variety of parameters such as lateral acceleration as well as brake lever pressure as well as yaw/pitch/lean angles. It allows the system to modulate the brake action to better balance deceleration with stability. 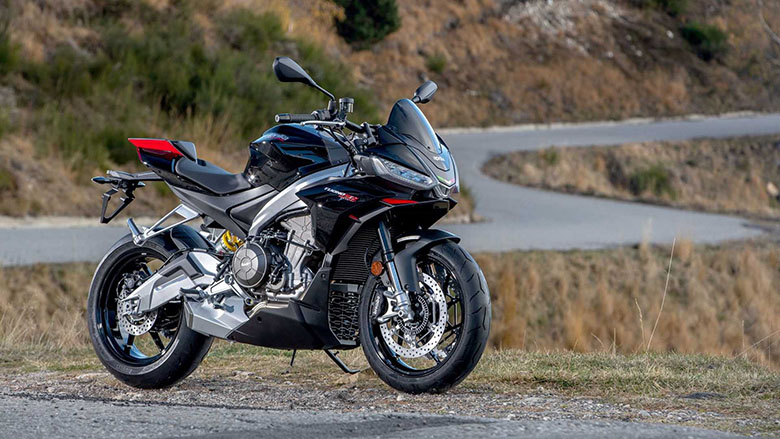 Five Riding Modes (three for road usage and two for track use) are available to make living on-board easier, much as the Tuono 660. To have the most significant traction control, wheelie control, engine braking, ABS, and other manageable factors, the rider merely has to choose the Riding Mode that best reflects their riding demands. The “bending lights” feature, part of the front LED light cluster and includes perimeter DRL, was made possible thanks to the inertial platform (this pair of additional lights illuminate the entire corner, increasing visibility when leaning).

The bike’s design stands out for its revolutionary twin fairing, which functions as an aerodynamic appendage, thanks to its decreased surface area. Aside from improving stability at high speeds and providing additional rider comfort by shielding them from direct airflow, this air pressure helps to deflect hot exhaust gases. It is further accentuated by solid and sporty Factory Dark artwork and the inclusion of the single-seat tail fairing, which is painted black and red and given as standard together with the passenger seat and footpegs. In the Tuono 660 Factory version, the pegs on this bike are identical to those on the Aprilia RS 660. 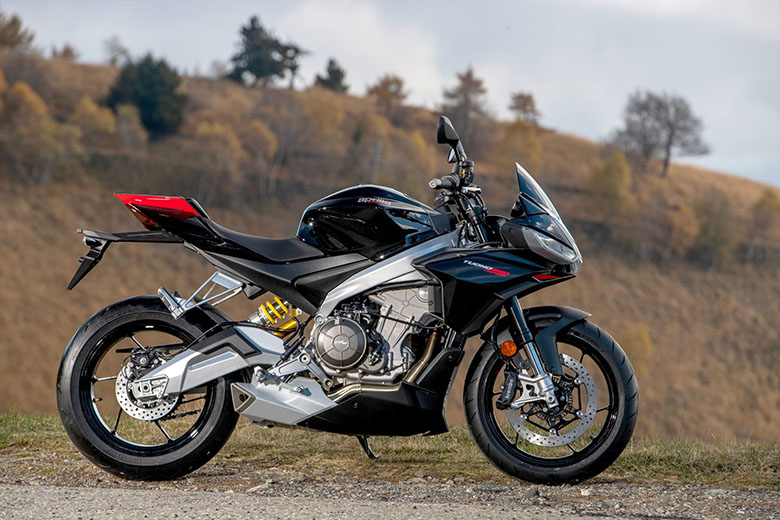 The Aprilia Tuono 660, like the RS 660, has a tremendous weight-to-power ratio. For a naked sportbike with 100 horsepower, the wet weight of only 403 pounds is a record-breaker in its category and makes it accessible to riders of all skill levels.

Shaped by the wind

The Tuono 660 is a sportbike in every sense of the word, with a sleek, compact design that accentuates its dynamic character. For increased aerodynamics, the RS 660’s unique double fairing has been unabashedly copied by this model.

Diecast aluminum frames and swing arms of the Tuono 660 make for a stunning design. Furthermore, the Kayaba adjustable suspension has a specialized set-up, and the chassis proportions have been revised to increase responsiveness and handle the steering column’s new geometry.

Master of all roads

Five modes, three for road and two for the track, allow for a wide range of riding styles and levels of experience. The configurable and easy-to-use electronic instrument panel makes it even more pleasurable.

Concept Black, Iridium Grey, and Acid Gold, the latter of which was previously only available on the RS 660, but has already established new standards of design and aesthetics in the motorcycling industry, are all available.