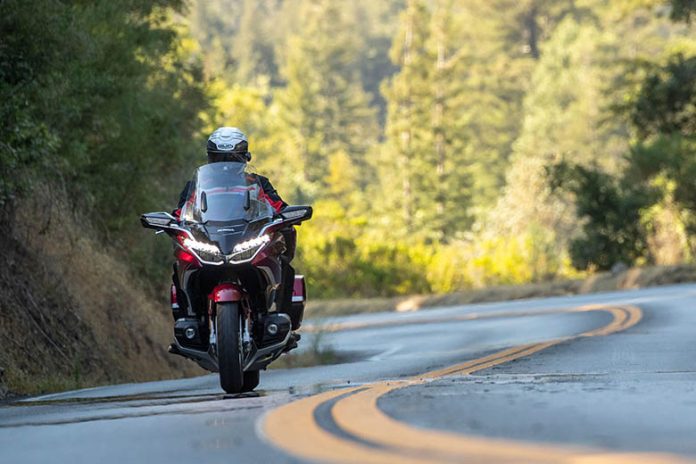 Only four years after World War II, Honda manufactured its first complete motorbike, the D-Type. The Dream was another moniker for the D-Type. Although its precise origins are uncertain, the new motorbike marked a significant advancement toward Soichiro Honda’s goal of accomplishing his vision for the business that bears his name. Mr. Honda, a former racing car driver and brilliant engineer led Honda Motor Company, Ltd. with charm and candor for many years. Honda rose from modest origins to become one of the biggest automakers in the world, as well as the leading producer of engines and motorcycles. The business also produces ATVs, power tools, airplanes, and robotics. It has also raced in almost every kind of motorcycle and vehicle competition and won championships.

In the last 72 years since the D-Type first appeared, Honda has manufactured several ground-breaking motorbikes, including the Super Cub C100, the CB750, and the Gold Wing. With more than 100 million units made since 1958, the Super Cub C100 is the most produced automobile in history. 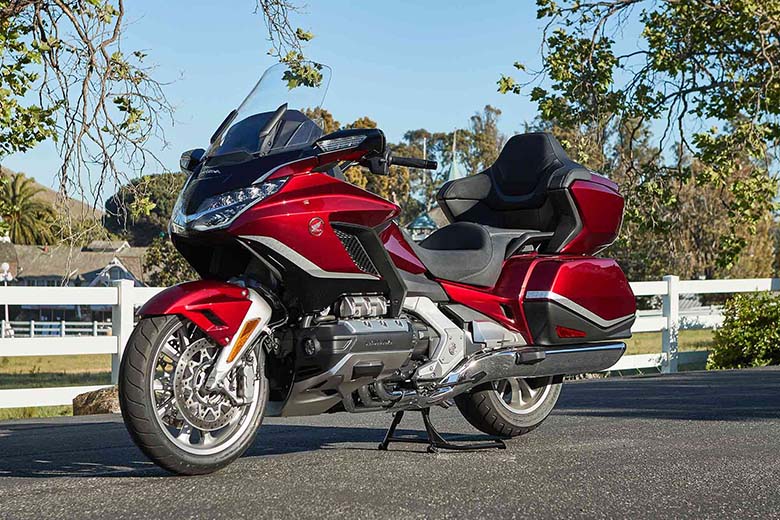 A Wing Fit for a King

The Gold Wing has contributed significantly to Honda’s success, notably in the United States, being one of its most durable vehicles. The 1975 GL1000, the first Gold Wing, was the second-most powerful production motorcycle at the time, behind only the Kawasaki Z-1, which was based on Honda’s “King of Kings” M1 prototype. The liquid cooling system and flat-Four engine configuration of the GL1000 established the standard for silent, seamless performance.

The Gold Wing opened up a brand-new industry by satisfying the long-standing need for reliable, abundant long-distance motorcycle travel. Honda’s new touring customers became an essential element of the design and development process because of its comfort and dependability, making it more straightforward for more people to travel longer distances. As the GL developed, peak torque rpm grew closer to cruising rpm because owners were ready to give up top-end power for more excellent intermediate performance.

Honda provided an Interstate version of the GL1100 with a fairing, windshield, saddlebags, a trunk, and a luxurious king-and-queen seat when it first debuted the model in 1980. Honda unveiled the Aspencade, an even more opulent version, two years later. When the GL1200 was released in 1984, the Gold Wing was still available in a basic form, but by 1985, the Interstate, Aspencade, and Limited Edition variants were the only ones that remained on the market. Since then, Gold Wings have been equipped for touring due to the market’s decision.

Regular readers are aware that the histories of Rider and the Gold Wing are similar. In 1974, the same year the GL1000 was released, Denis Rouse established Rider (for the 1975 model year). The popularity of the magazine and the Gold Wing increased concurrently as the touring market rose meaningfully in the late 1970s and early 1980s. We have published numerous tests and stories that highlight the Gold Wing throughout the years. It has been on our cover multiple times, including in this edition. It was also named Rider’s Motorcycle of the Year in 2001 and 2018, among other accolades. 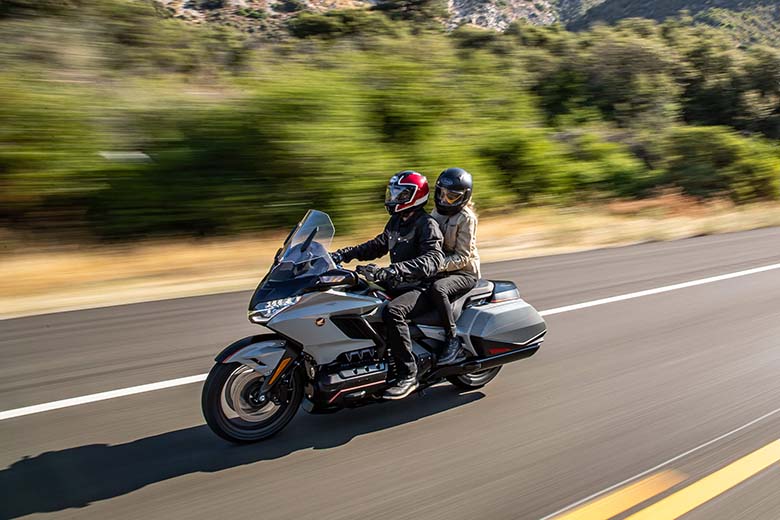 Numerous Gold Wing owners are capable of riding alone, and many of the miles I covered for this test were done so. However, the Wing’s real calling is comfortable two-up commuting. A larger trunk (now 61 liters, with 121 liters of total storage space; the ordinary, non-Tour Gold Wing forgoes the trunk) and upgrades to the styling and audio system are among the 2021 enhancements to the Gold Wing Tour that Ken Lee and his wife Katie reviewed in their first ride review. Ken and Katie thought the amenities and ergonomics were better than the previous-generation 2008 GL1800 in their garage.

Over the years, Genie and Mark Tuttle, a former EIC, conducted several two-up tests on Gold Wings. I was assigned to test a 2009 GL1800 for Rider’s 35th-anniversary issue as a staff member who had been working with us for less than a year. My wife Carrie and I had only just begun dating, and she had never ridden a motorbike before. What more comfortable place to introduce her to the pleasures of two-wheeling than the rear seat of a Gold Wing? She was sucked in right away. Being spoiled from the start, she has held the Gold Wing as the benchmark for all other motorcycles we have ridden.

Photographer Rich Cox and I traveled along California’s western tip from Venture to Monterey on Highway 1, which follows the rugged, spectacular coast for 100 miles from Cambria to Carmel, for that 2009 road test. Rich rode the magazine’s last photo wagon, a black 2000 25th-anniversary GL1500SE. For this test, Rich’s former student and fellow photographer Kevin Wing and I traveled together along the same northern route. 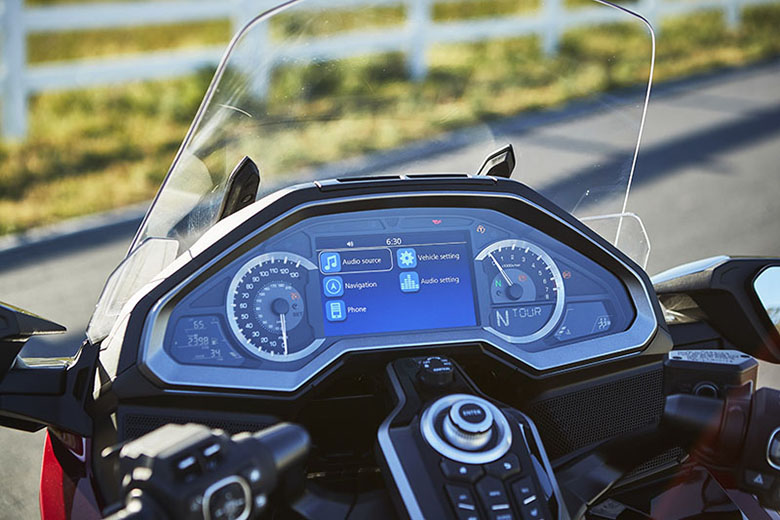 Torque and a Fork

When you twist the handlebars, the Gold Wing’s liquid-cooled, precisely balanced flat-Six engine, which has a displacement of 1,833cc, produces a generous serving of creamy smooth torque. The maximum torque for the rear wheels of a 2018 GL1800 that we dynoed was 106 lb-ft at 4,500 rpm, and there was more than 100 lb-ft available between 2,000 and 5,000 rpm. The outcomes should be about the same for our 2021 GL1800, given there have been no mechanical modifications since then.

The Gold Wing’s optional 7-speed Dual Clutch Transmission (DCT) swiftly changes into higher gears while the throttle response is softened in Tour mode, maintaining low rpm and excellent fuel economy. (For 1,300 testing miles, we obtained an average fuel economy of 40 mpg and a range of 224 miles. The figures will be higher than average since; admittedly, we rode the Wing hard and quickly.) The Gold Wing’s torque-rich Six will effortlessly tow the 838 pounds of the bike with hundreds of pounds of rider, passenger, and gear when you exit a turn while the DCT is in sixth gear. It is usual when traveling slowly on a winding route.

I found Sport mode rather abrupt for a motorbike built for traveling. I mostly disregarded the Rain and Econ modes, despite their usefulness. On winding roads like Highway 1, I set the DCT in manual mode and used the paddle controls to swiftly shift up or down when I didn’t want it to turn up too soon or struggle to find the proper gear while navigating between curves. I often left it in third gear and used the throttle to manage rpm and speed due to the wide range of torque.

The rider may access the menu to alter the rear reload when stopped and the riding mode also impacts the suspension damping. On the picture shoot trip with Kevin, I rode alone and had the rear replenished set to two-up plus baggage. It boosted cornering clearance such that I seldom scratched pegs, even when riding quickly. 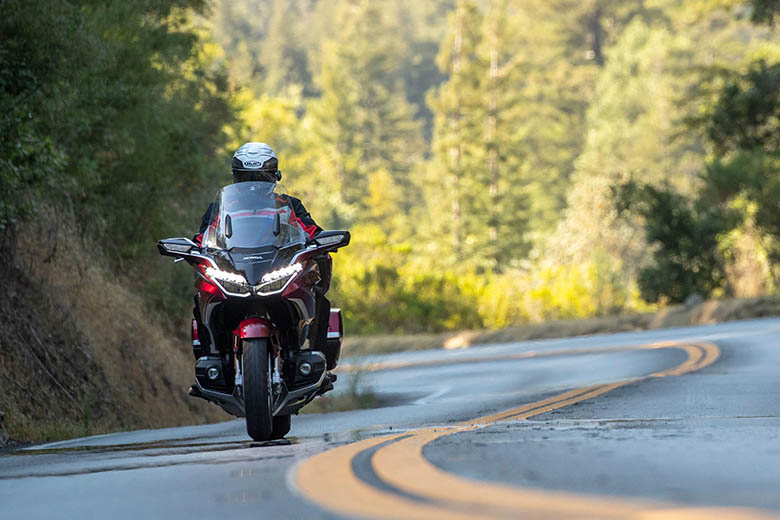 The double-wishbone front suspension, which isolates steering dynamics from suspension action and minimizes fork dip under braking, is what most distinguishes the current-generation GL1800 from its predecessors. It is a beneficial feature on a hefty bike with powerful, sensitive brakes. The rider and passenger are protected from vibration by the suspension, which also separates them from front-end input. It also provides high compliance. Although the connection with the road is often hazy and far away, you can see the tie-rod ends bouncing quickly up and down over lumps, seams, and ripples from the cockpit. The new Gold Wing will obediently react when pushed hard, but it loses some of the light, intuitive steering response of the GL1800’s predecessor. 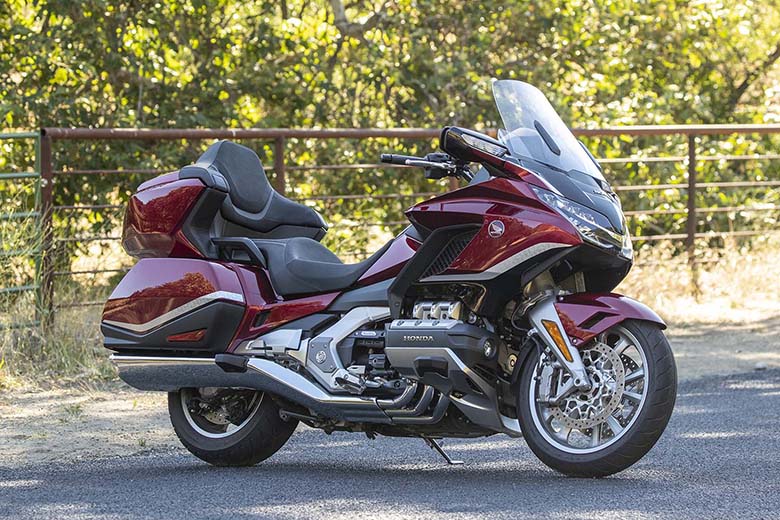