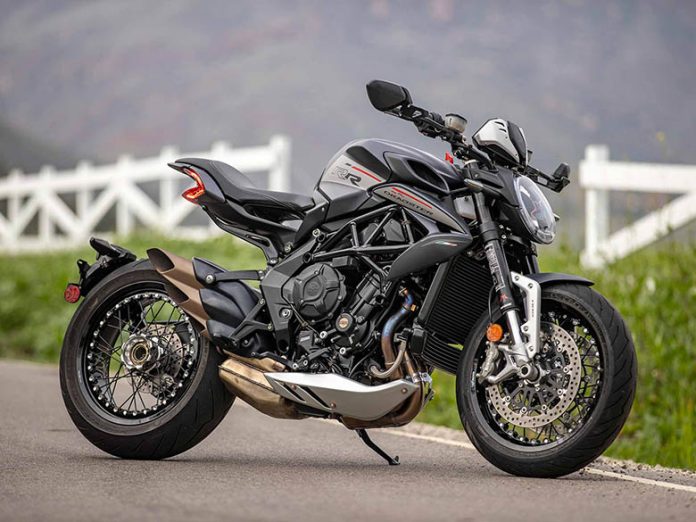 MV Agusta has always had a soft spot in my heart. Like most others, I feel that a portion of my interest in this boutique of boutique manufacturers is from how MV’s designers bring outrageous ideas to life without regard to cost or production volume. Also, MV Agusta riders are not likely to see another model of their bike on a typical Sunday ride. When their MV gets noticed — which it almost definitely will due to its unusual appearance, sound, and cool factor — the response is unlike anything other, but this mix of outstanding appearance and pure coolness would be pointless if not matched by the performance, and the 2022 MV Agusta Dragster RR SCS Street Bike, has performed in plenty. When its ride-by-wire, 13,200 rpm engine is allowed to sing in the upper rpm ranges, the vehicle is quite enjoyable to drive. 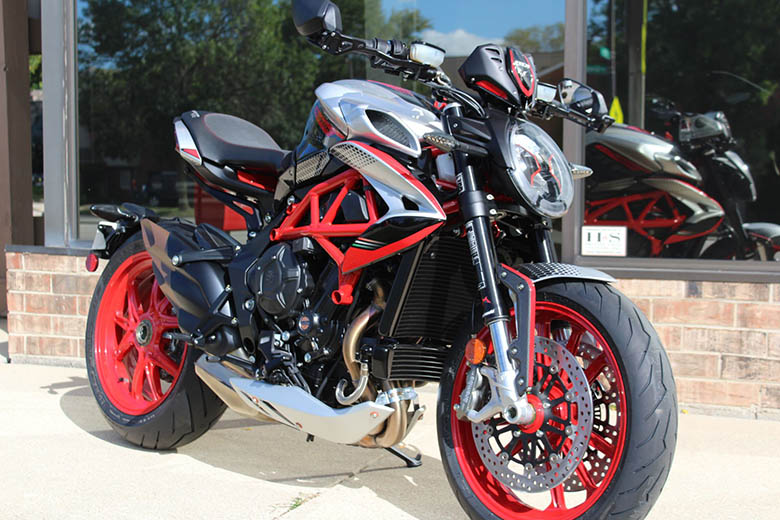 It, however, is not a simple task. To achieve the best sound from the brand new slash-cut triple mufflers that serve its 798cc inline three-cylinder engine, riders must first fumble through all of the non-intuitive electronic programming and rider-aid settings to select the accurate engine maps (Rain, Sport, Race, and Custom); throttle response (quick or standard); engine-braking (regular or light); and traction control settings to match their riding style and riding conditions. Riders should anticipate this procedure needing a little time and frequent reference to the owner’s handbook on their initial attempts.

In addition to the engine electronics, the wheel “lift” (wheelie) control and ABS have several settings (including cornering ABS). There is also launch control, as expected given the vehicle’s name. To access all of its electronic customizations, the MV employs the smallest feasible switch gear on the handlebars, which means that a few of the switches serve multiple purposes; for example, the starter/engine stop button also regulates engine mapping.

It does clear up the cockpit, but one consequence of this multi-functioning became immediately apparent during testing when a blocked starting switch rendered the button multi-functionally dysfunctional. First, when the key was turned, the engine would instantly turn over, which was fortunate because the engine would not turn over if the gearbox was in gear or the side stand was down. Adding insult to injury, the malfunctioning switch also randomly selected and changed engine maps while the bike was ridden, causing further aggravation. Permit me to state that switching instantaneously from a custom map configuration of maximum power and 0% traction control to Rain mode with a high amount of TC is a bit disconcerting, particularly mid-corner, and I would not want it to be the other way around in wet circumstances. 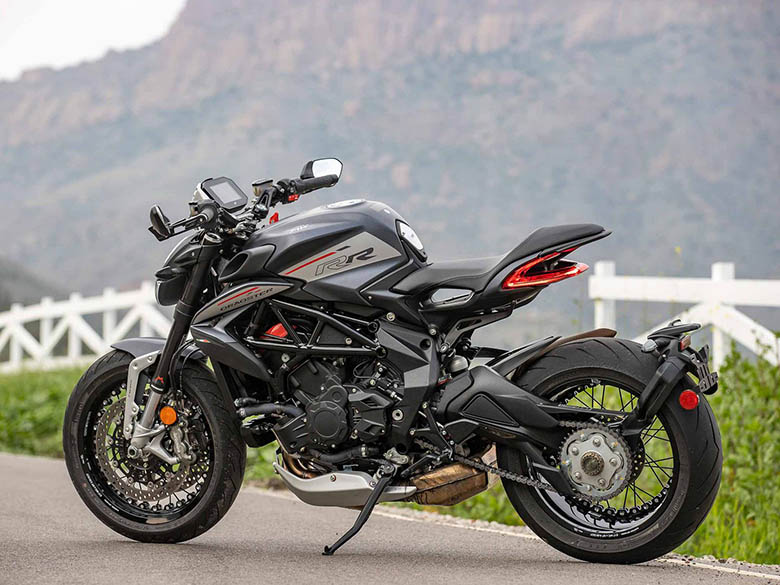 Once the rider has mastered the engine and chassis electronics, they may change the non-virtual components, which include a 43mm Marzocchi front fork, Sachs rear shock, CRC and push rod steering damper. Adjust your tire pressures and the RR will give confidence in turn entrance, absorb cornering bumps, and provide a powerful corner exit. Once everything was appropriately adjusted, the RR sprang to life everywhere.

Riding around Southern California, we did receive approving nods; the bike is quite striking, with notable design features such as the single-sided swing arm and black-spoked wheels; particularly interesting are the rear wheel spokes, which are attached to only one side of the rim for a strikingly distinctive appearance.

With mirrors attached at the ends of each handlebar, the RR seems as broad as it feels. It should be seen as reasonably comprehensive, as splitting California traffic at stoplights or maneuvering through tight spaces may be tricky; motorcyclists will frequently find themselves moving their mirrors inward. These bar-end mirrors are also more vulnerable to vibration, which makes it impossible to distinguish whether the vehicle behind you has its lights on the bottom or the top until they begin flashing. Important information is presented here. Constant mirror adjustment and vibration finally made the mirrors so loose that they began to vibrate inward on their own. Ugh.

On the opposite end of the convenience range, the “SCS” Smart Clutch System of the RR is an excellent feature. The SCS is essentially both a manual and automated clutch; the rider has the option to activate the grip manually or simply forget about it. Engineers at MV cooperated with Rekluse to perfect this mechanism, which allows the rider to engage the gearbox without pulling the clutch lever, transforming the RR into an automated bike that waits for throttle input before accelerating. The rider does not need to engage the clutch to come to a halt. To accelerate from a standstill, the gearbox must be in first gear or warning light will illuminate, but that’s about as complicated as it gets. The SCS also works well with the quick shifter, allowing the rider to click through the gears for both up-shifts and downshifts as long as the QS is engaged. 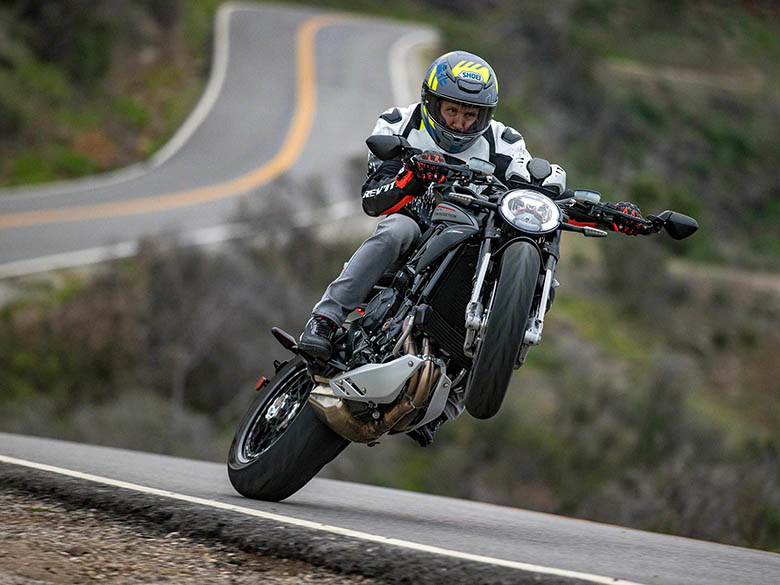 Since the RR also has an automatic gearbox, one should be aware that parking the MV on a slope and leaving it in gear would not prevent a roll-away tip-over, as the clutch is technically not engaged and the MV can roll while in gear with the engine off. Consequently, there is an additional foot pedal to the right of the rear brake pedal connected to the parking brake.

As previously stated, the RR is also equipped with launch control. Still, with the SCS auto-clutch, impromptu stoplight races can be easily spoofed by playing dumb, keeping the left hand off the handlebar until just before the light changes, and quickly turning the throttle as the light turns green, leaving stoplight opponents baffled. During CW’s performance testing, the MV’s best quarter-mile time was 11.57 seconds at 126.40 mph when launched without the clutch, compared to 11.31 seconds at 127.49 mph when tossed with the clutch. It’s 0.26 seconds slower, but judging by the trap speed, it’s essentially the same after launch.

Even though the Dragster RR SCS is a naked design and looks geared for city riding, the engine/chassis/suspension combo, in conjunction with the electronics package, makes the bike appear to be a hybrid track-shredding sport bike/cross-country touring machine. There are two dash displays, one for street usage and one for track use, to further promote this dual personality. The street dashboard features all the standard displays, including speed, rpm, odometer, trip A/B, time of day and riding time, ambient and coolant temperatures, etc., but lacks a fuel gauge. The RR informs you when you are on reserve, but as one rider discovered while tearing around deep in the mountains, the reserve doesn’t go very far; 12 miles, in one episode, after which I was pretty grateful to the random sport bike riders who pushed me to the nearest petrol station.

Built around the six-axis IMU and its array of sensors, the track display gives a wealth of information. If the rider is brave enough to keep one eye on the dash, they may view left and right real-time lean angles, maximum lean, distinct braking and acceleration Gs, a lap counter, lap time, maximum speed, and more. The display also permits a check of GPS monitoring after the journey. 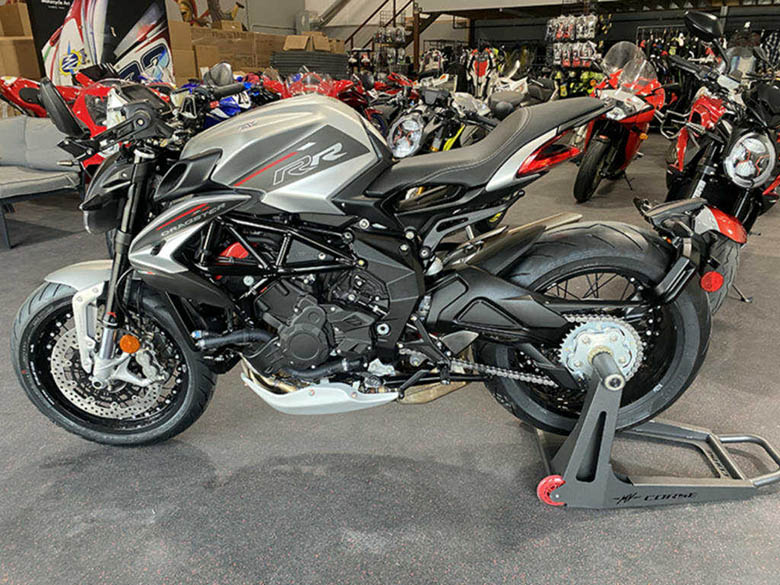 There is also an MVRide app that allows cellphones to view MV data and make RR modifications. The program also enables the rider to interface their phone through the dashboard for alerts, music, SMS, and more; it provides a great deal of connection if the rider wants such access.

For any amount of time spent cruising down your favorite stretch of highway while utilizing the GPS, cruise control, chatting on the phone, or listening to music, I would strongly recommend upgrading your seat. Even though the primary seat is made of memory foam, this 165-pound rider’s derriere was painful after 40 miles of highway riding. 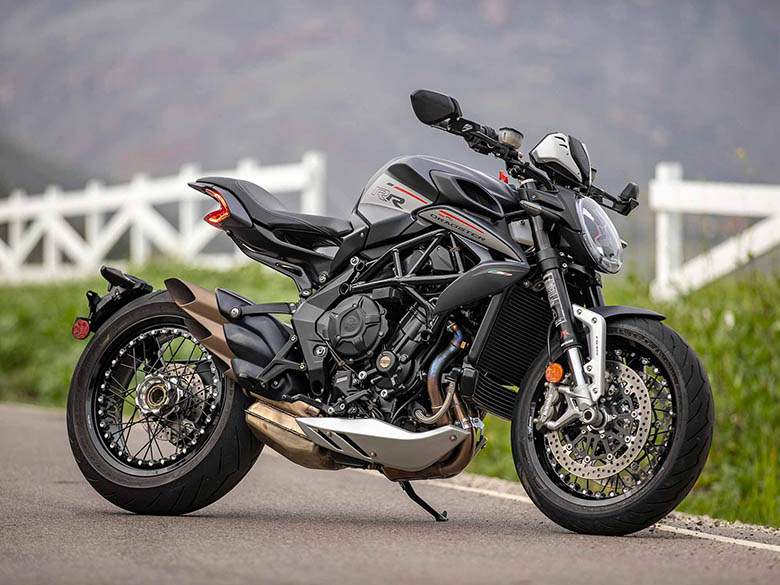 Overall, the 2022 MV Agusta Dragster RR SCS Street Bike has a terrific personality, an appealing sound, and a sleek design. Unfortunately, it also has a few peculiar characteristics, albeit they are easily correctable. Although we’d expect better standard suspension settings with a broader range of adjustability on an 800cc naked bike with a $23,398 price tag, the sheer pleasure of hearing the triple sing through the gears at high rpm, auto-blip on the downshifts, and the sensation of riding something extremely exclusive are more than sufficient. Turn the throttle and listen to the lovely music that this Dragster produces.