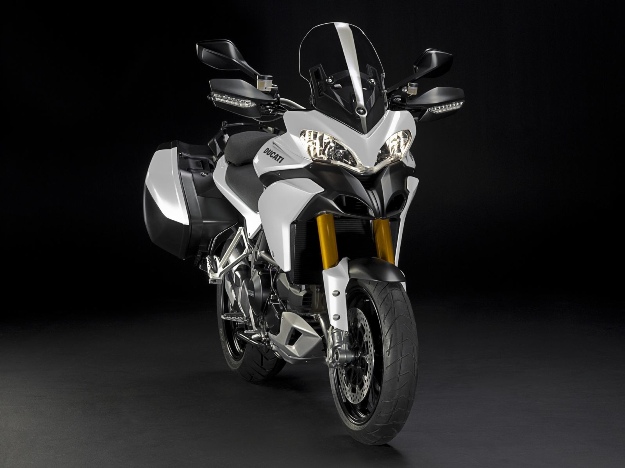 2013 mark a new chapter of the life Ducati Mulstistrada, which, declined in 4 distinct versions, inaugurates a system of very reactive adjustment of electronic suspensions. The Touring version tested again showed us that it was more the roadster of the road trails.

The differences with the previous year’s bike do not jump to the eyes; however Ducati 1200 Multistrada evolves appreciably. Already, 4 versions from now on are proposed: a model of line entry, an S Touring (our motorcycle of test), an S Granturismo and one racy S Pikes Peak. All receive origin Safety Pack including the one anti-locking and the one anti-skid. The list of the equipment differs according to the levels from completion.
The rich equipment of our Touring understands a system of starting without key, powerful fires with diodes (night light and code), the heating handles, the side bags (58 L on the whole) and a new fashion of adjustment of the suspensions DSES (Ducati Sky hook System). Developed by Sachs, it will equip the versions S, the standard keeping manual adjustments.
Particularly reactive, Sky hook is pressed on 4 accelerometers connected to a power station which manages hydraulics of the suspensions. Depending on the state of the bitumen, their firmness is immediately adapted to preserve comfort and is handling. Always present, 4 presetting (sport, touring, urban and endure) act on lighting to modulate the power and the level of intervention of anti-skid and ABS. 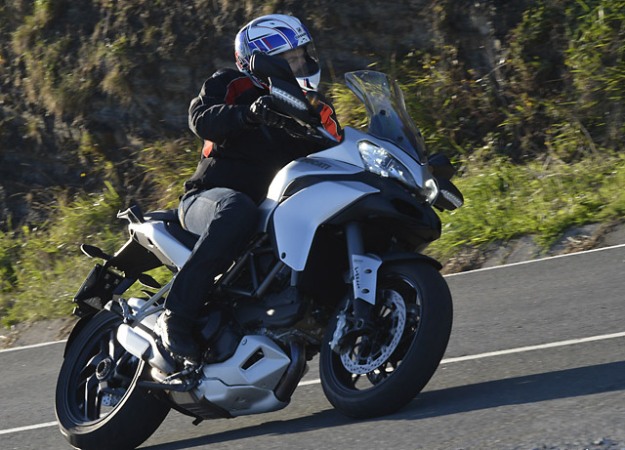 This Ducati Multistrada again takes the ergonomics and the comfort of its predecessor, with in particular a broad and comfortable saddle. If one always curses against the system of closing of the side bags rotten evil, one comforts oneself with the new adjustment of the bubble, which is handled with only one hand, even while rolling.
To animate this large road trail, Ducati took again its mythical Testastretta of 1198 Cm3. Its cylinders receive the occasion a second candle: combustion is supported; the rejections in the atmosphere are decreased. The twin of race thus gains in couple (12.7 against 12 m.kg) and in free version (150 ch), it always impresses its rises in mode. Relatively flexible (it begins again without too much stumbling with 2,500 tr/min), it draws on the arms up to 9,300 tr/min (mode of the maximum power) when one “screws” the throttle hand grip.
Nothing to waste, the selection proves to be perfect with high-speed. Side consumption, Ducati Multistrada 1200 is shown relatively sparing: average of 5.6 l/100 to the instrument panel noted. Not bad for a motorcycle of 235 kg with an imposing frontal surface. 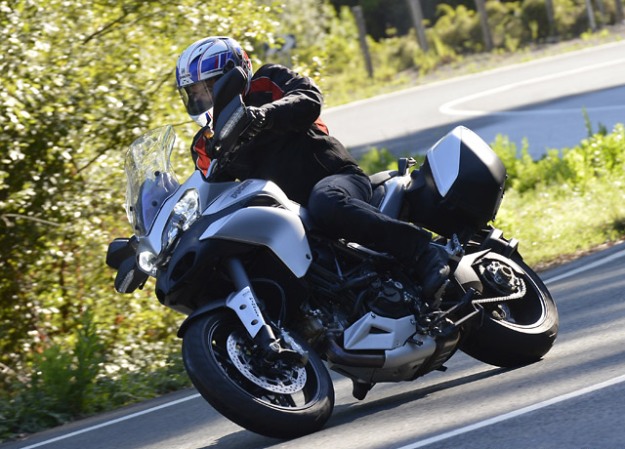 To inaugurate the “Skyhook”, Ducati replaced the Ohlin’s precedents by Sachs. No revolution in the behavior: the Ducati 1200 Multistrada preceding ones held the paving stone well, also the new grinding. If one perceives the various preset modes well (sport, touring, urban and endure), to measure what this “Skyhook” really brings is more difficult, in particular on our course of correctly covered test.
But suspended well, Ducati 1200 Multistrada is carried out without much effort, its geometry conferring a sharp and precise behavior to him. Serious that one finds it on the side of the brakes, where the corrosive one is combined easily with the power, even if the back pedal has a too important race to be precise.

To propel the news Ducati Multistrada 1200, Ducati took again Testastretta of 1198 Cm3, whose cylinders receive a second candle (supported combustion, decreased rejections). Of a power of 150 ch in free version, the twin can be done flexible as it lengthens the arms when one “screws” the handle.

The coating during our test was too “clean” so that we can really judge all the benefit brought by the electronic system of suspensions DSES. One on the other hand can affirm that the choice of elements Sachs instead of Ohlin’s precedents does not sully of anything the handling: it is perfect.

No aesthetic revolution for the Ducati Multistrada 2013, multiple rework techniques. This trail road is now available in four different versions with prices ranging from 16 to 390 to 22 290 Euros. 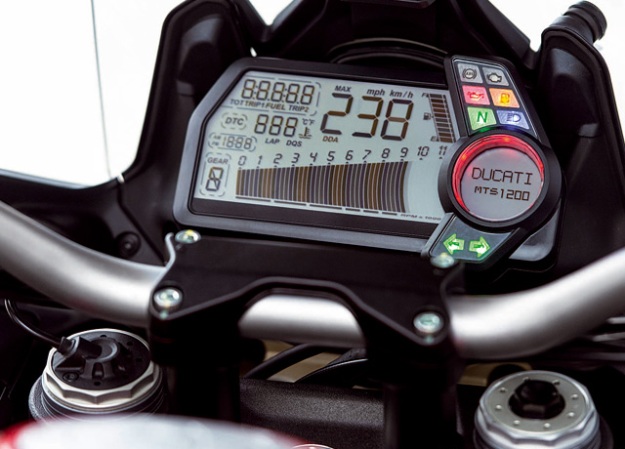 Very readable (a prowess for a very digital screen), the large meter receives all useful refinements for long ways (gauge with petrol, mileage remaining with the full one, temperature, etc). It is ordered at the handlebar via several cursors. 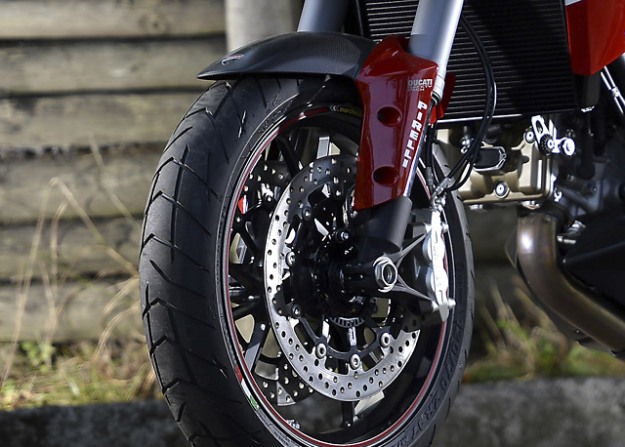 Powerful and corrosive, only the back brake can call criticism: the travel of the pedal is too long to be precise. 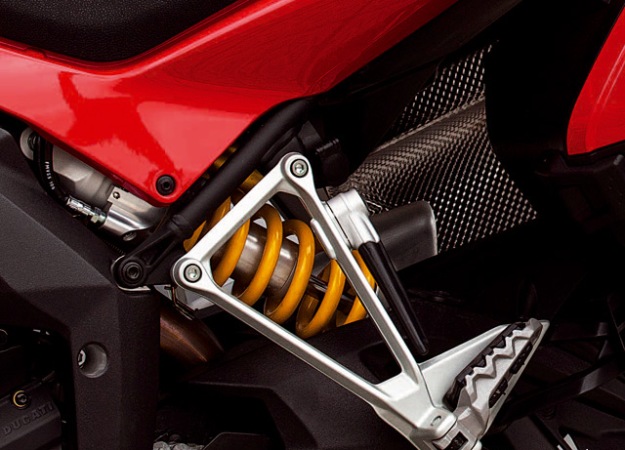 If Ducati Multistrada preserves its 4 presetting (sport, touring, urban and endure) accessible since the handlebar, it inaugurates the “  Skyhook  ” (“  hook of the sky  ”), a mechanism which adapts the firmness of the suspensions in real time thanks to 4 embarked accelerometers (1 on the fork, 1 on the arm oscillating and 2 on the suspended masses). 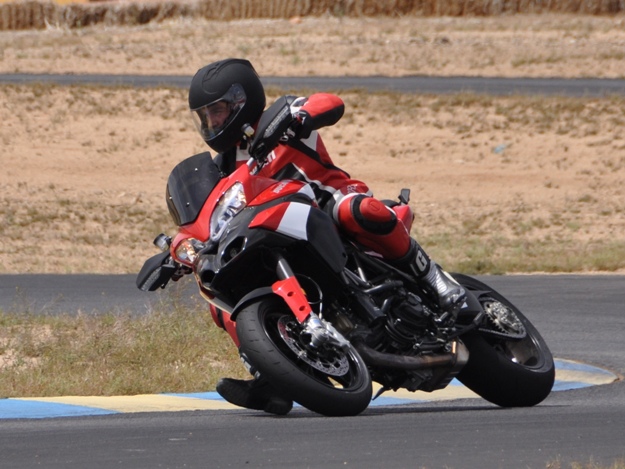 Contrary to BMW R1200GS or Triumph 1200 Tiger Explorer, Ducati Multistrada 1200 S Touring are a primarily road trail with the marked driving character. Besides one is more tempted to align the collars than to venture on forest roads. With it, one benefits at the same time from the feelings of a sporting roadster, comfort of road and electronic refinements worthy of a GT. But it is necessary for that to break its moneybox: the version tested here exchanges against a check of 19   690 €.