MotoAmerica just organized the first round of its 2020 Superbike series. The event was conducted with the collaboration of Road America. However, due to the novel COVID-19 pandemic, the event couldn’t host many spectators as people are restricted to their homes. So, MotoAmerica Battles at Road America without Supporters. It was the first leg of the company’s Superbikes 2020 racings. It was the first racing event on both national or international levels after the coronavirus pandemic hit the world. Though the event couldn’t see many fans to support, the competition itself was thrilling.

Chuck Aksland, the MotoAmerica partner, briefing about the event said that since the COVID-19 pandemic hit the world, the company had known that the event would not be as enjoyable as the previous ones. He said that due to lockdowns, major racing tracks were unavailable, therefore the company shifted the event to the racing tracks of Road America. The dates for Road Atlanta and VIR needed to be rescheduled which the company could not afford so they were canceled. He further briefed that both the riders and the teams were out of business since the pandemic hit the world and that they had to earn a living which was not possible until they were racing. Fortunately, all the partners and the sponsors agreed to this idea.

Thanks to Road America president and general manager Mike Kertscher who agreed on giving them the tracks after assuring that the fans would not be allowed in the first round. The second leg of the event, however, would be organized with fans at RoadAmerica from June 26 to June 28. 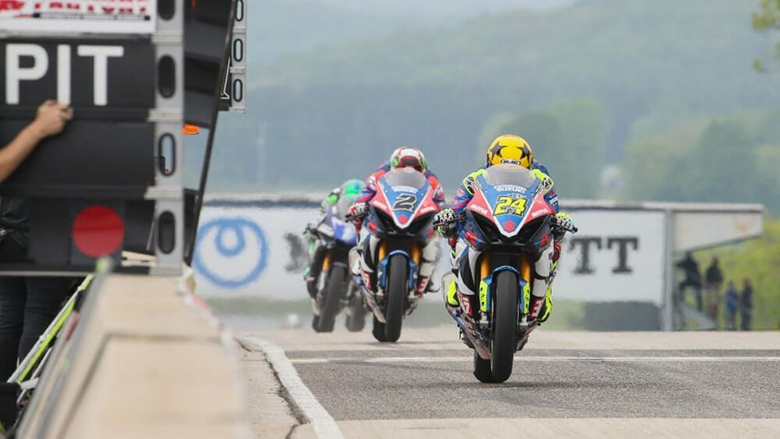 The collaboration between MotoAmerica and RoadAmerica, with the help of state institutions, made this event possible and the teams and riders were able to earn a decent income. Moreover, on May 13, the supreme court of the state nullified the governor’s orders to extend the lockdown which would have made the event impossible. Therefore now the fans would be able to behold the grand event in its full glory.

John Evert, the communications director of RoadAmerica stated that there were only 800 people present in the first round of the series. However, if they were allowed to adjust 10000-15000 spectators by the authorities, even that would make 10 percent of the total capacity.

The event followed the social distancing and minimal contact guidelines due to the increasing COVID-19 cases. John Evert said that RoadAerica was strictly following the social distancing guidelines. Hand sanitizers and masks were given to everyone present on the tracks. An online system was introduced for buying the tickets so that there would be minimum physical contact. He said that they checked the temperature of every participant so that the safety of teams and the riders may be assured. The staff was given personal protective equipment and N-95 masks so that the security of participants would not be compromised.

Askland praised Niccole Cox, the Operations Director, for making this event happen. Askland said that Niccole was a competitive worker and when she came to know about the event and the difficulties it had to face, she confronted the challenge boldly and made it happen. She further said that Niccole had a vast experience of conducting events in conditions like these so the company was able to benefit from her ideas. She also acclaimed the efforts of RoadAmerica saying that they were extremely thankful to the workers and staff of RoadAmerica who, in these unfavorable conditions, worked day and night and made this event possible. However, the guidelines provided by the officials of RoadAmerica for this event depicted their sincerity and expertise in their fields. Social distancing and contactless dealings were assured for the sake of safety.

MotoAmerica had named each racing team a “functional workgroup”. The riders were advised to self examine themselves. All the team members were asked to keep checking their temperatures. In case of any emergency, teams were encouraged to report to management so that proper medical care could be provided and if necessary, the person could be admitted to quarantine. Askland further told that the OSHA instructions were provided to each team. To avoid the physical contact, digital waivers were placed on the tracks and video meetings were arranged for the riders so that nobody could contract the coronavirus. Masks could be removed inside a functional workgroup but were mandatory during any physical nearness. Askland added that the groups were told their responsibilities.

The winner was given the advantage of extended live coverage. Though Fox2 channel is the official contractor of MotoAmerica for the Superbike2020 series, Fox1 was chosen. Other TV sports channels such as Eurosport broadcasted the whole event live in countries like the UK, Sweden, and France. The organizers have announced that the second leg of the event will be live broadcasted on in fifty-four countries through their Asian and European TV networks.

Askland added that the company was hopeful that they had made an everlasting impression by making this event possible. She said that MotoAmerica’s passion for these racings would keep supporting these events and it is the first time in the history that MotoAmerica Battles at Road America without Supporters.