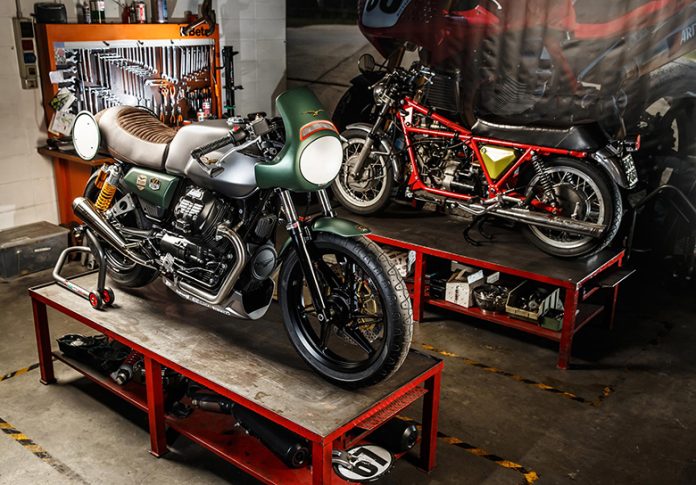 The Moto Guzzi 2022 V7 850 Fast Endurance Trophy Classic Motorcycle is dedicated to pairs of riders who want to ride in spectacular “fast endurance” races inspired by the legendary races of yesteryear; it is back in 2022 with a significant addition after three incredibly successful seasons with no less than 30 teams on each starting grid in 2021. In reality, the new Moto Guzzi V7 “racing” variant will debut for the fourth Eagle single-brand championship.

The newest generation of Mandello’s best seller, which debuted on the market in early 2021 and immediately became extremely popular with the general public, becoming one of the most sold bikes in Italy as a result, will be the star of the Trophy, promising even higher performance and even more enjoyment for all competitors. 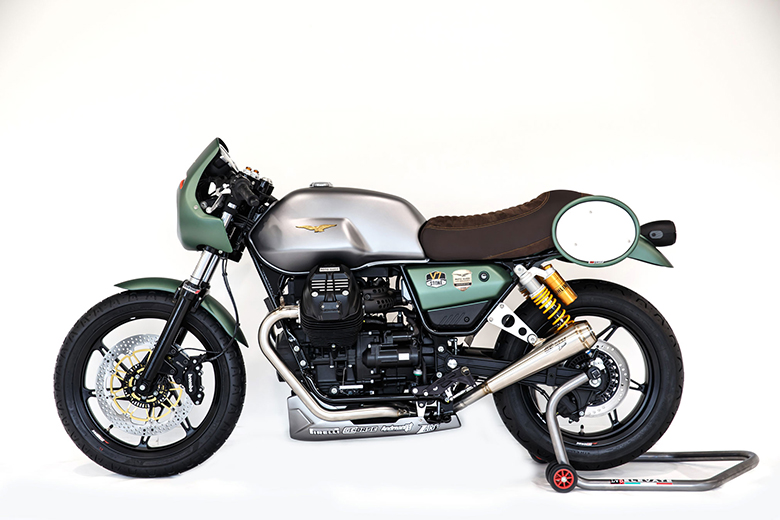 The Guareschi brothers, the legendary Moto Guzzi tuners, developed the GCorse Racing Kit specifically for the new V7 by drawing on the invaluable experience accumulated in the first three editions of the single-brand trophy. This equipment package converts the new Moto Guzzi V7 into the racing version, which is the same for everyone to ensure an even playing field and maximum fun.

The result is a bike that is even quicker and more effective, with an improved frame and suspension that makes it more accurate and stable. The Moto Guzzi Fast Endurance’s strengths remain unaltered, making it possible for anybody to enter racing: the new V7 “Trofeo” is still simple, approachable, and appropriate for every rider. It boosts performance and the thrills on the track. 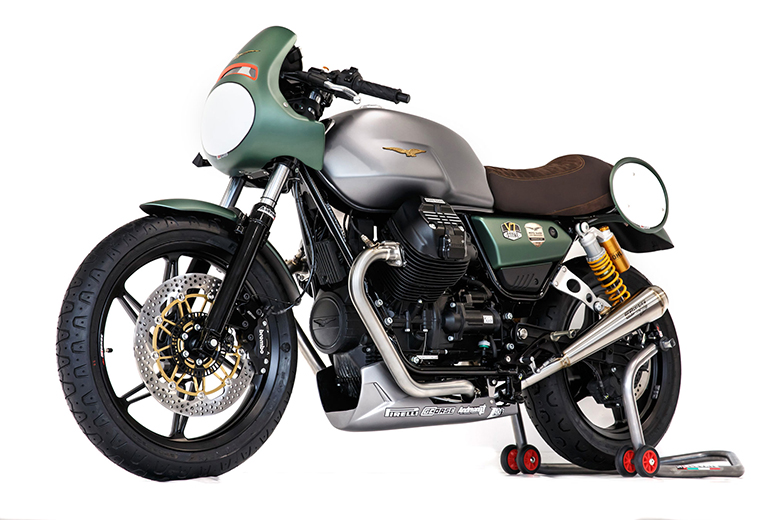 Riders will still be allowed to utilize the Moto Guzzi V7 III, the star of the single-brand championship’s first three seasons and a machine capable of stunning with its agility, speed, and dependability, in the 2022 edition. It is an even simpler and more convenient option for anybody looking to enjoy themselves on the track or who wants to extend the life of their investment from past seasons.

The teams on the “seven-fifty” from Mandello equipped with GCorse Racing Kits will compete against all other teams, but they will have their race and championship division.

Last but not least, the crucial partnership with Pirelli, the Trophy’s exclusive supplier, has been reaffirmed for 2022. All V7 vehicles will be equipped with Pirelli Phantom Sports comp RS racing tires, which were created especially for the Moto Guzzi V7 and have a track record of excellent performance in all weather conditions.

Six races are held on Italy’s most beautiful tracks: The schedule now includes Mugello, and a night race will also occur at Misano.

Not all of the main changes to the 2022 Moto Guzzi Fast Endurance’s track debut of the new Moto Guzzi V7. The Eagle single-brand championship is prepared for a significant step up in quality after three years of constant growth that culminated with the recognition of the prestigious FIM European Cup title, assigned precisely in Moto Guzzi’s centennial year, and scheduling rounds on four of the most spectacular and fascinating tracks in Italy. The Cremona Circuit and the magnificent Mugello Hills, the speed deity’s shrine for every motorcycle enthusiast, are included among these “new entries.” 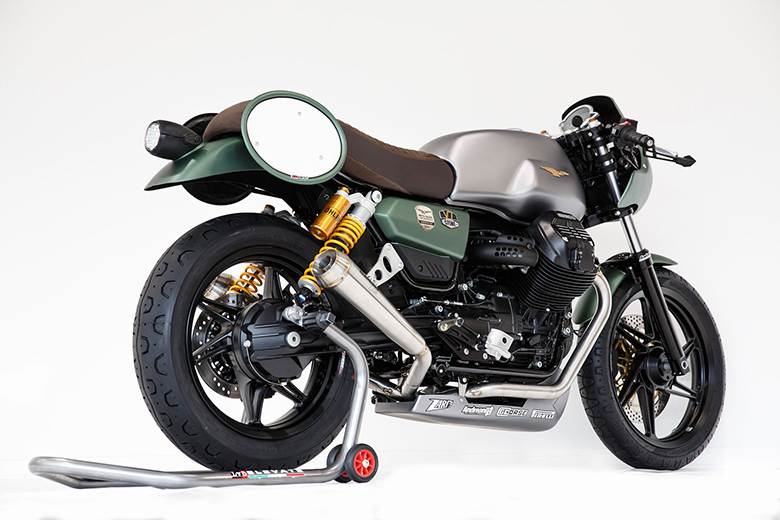 Six “small endurance” events are scheduled, beginning in Vallelunga on May 14 and 15. There will be two 60-minute races there. They will be followed by races at the Mugello (28 August) and Cremona Circuit (17 July) before the grand finale, which is set for Misano on October 15 and 16. Each site will hold a 90-minute “mini endurance” event. On Saturday night, the inaugural race on the Adriatic coast will get underway. The course will be illuminated by floodlights and V7 headlights for this event.

This new feature will make the 2022 Trophy edition even more exclusive and give all competitors the chance to experience racing at night, a thrill typically only available to a select few lucky riders. This feature was already planned for 2020 but was later scrapped due to the Covid-19 situation. The night race at Misano will last 90 minutes, as opposed to the 60-minute “mini endurance” event on Sunday.

The most enjoyable way to uncover your competitive side and experience the intense feeling of belonging that the Moto Guzzi brand fosters is to participate in the Moto Guzzi Fast Endurance championship. The structure of the race weekends anticipates the insertion of athletic competition into a highly social environment in true “Guzzista” fashion. Weekends will be spent fostering the camaraderie and teamwork that have always defined the healthiest of sports and symbolize their most meaningful value. The Moto Guzzi Fast Endurance championship is ideal for everyone to enjoy themselves, from track rookies up to the most experienced racers, thanks to the racing format and selection of the Moto Guzzi V7.

Every race weekend includes two 20-minute timed practice sessions for each rider. Each team’s starting position on the grid for the race, or both in the event of weekends with multiple races, will be determined by the average of the fastest times recorded by the two riders on the team.

The event starts in “Le Mans” fashion, with the motorcycles lined up on one side of the track and the riders needing to cross the tarmac to get in the saddle and start the race. It is a nod to the storied endurance races of yesteryear.

Each rider is limited to 15 minutes of riding time throughout the race, plus an additional 5 minutes to return to the pit lane after displaying the extraordinary “change” board. It implies that, depending on whether it is a 60- or 90-minute race, the race is livened up by at least three or four-rider changes in the pit lane. Refueling is prohibited. The top 15 teams get points after the race. 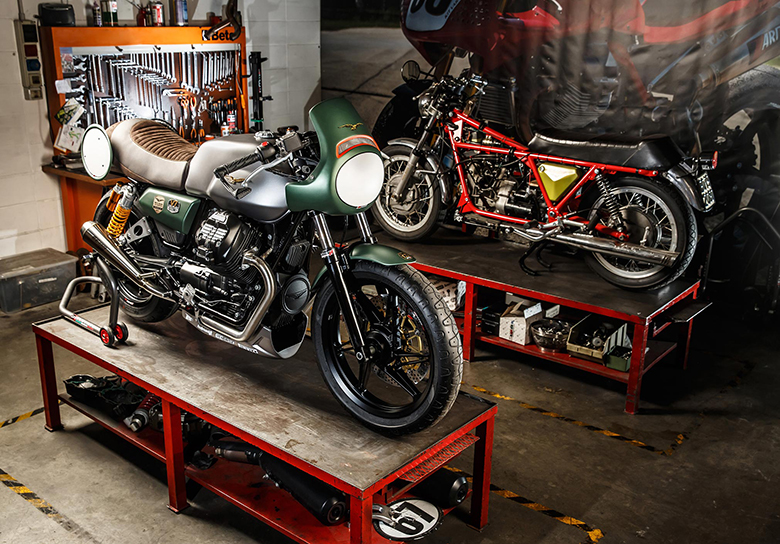