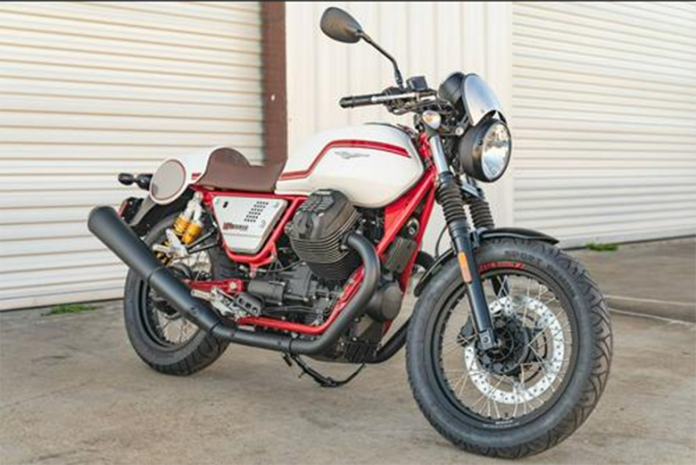 It differs from the previous version and the other V7 III models in several technological and cosmetic ways. In terms of design, the V7 III Racer Limited Edition has a new glossy white and red pattern. This characteristic is evocative of the “Rosso Corsa” color used to paint the frame and swingarm, which is an apparent reference to the original V7 Sport series, dubbed “red frame,” which debuted in 1971.

V7 III Racer, The Most Sporty

The 2020 Moto Guzzi V7 III Racer is not only the most athletic in the series, but it is also the one with the most prestigious components, as evidenced by the plaque positioned on the top steering yoke. It demonstrates Moto Guzzi’s capacity to produce authentic customs straight from the factory. 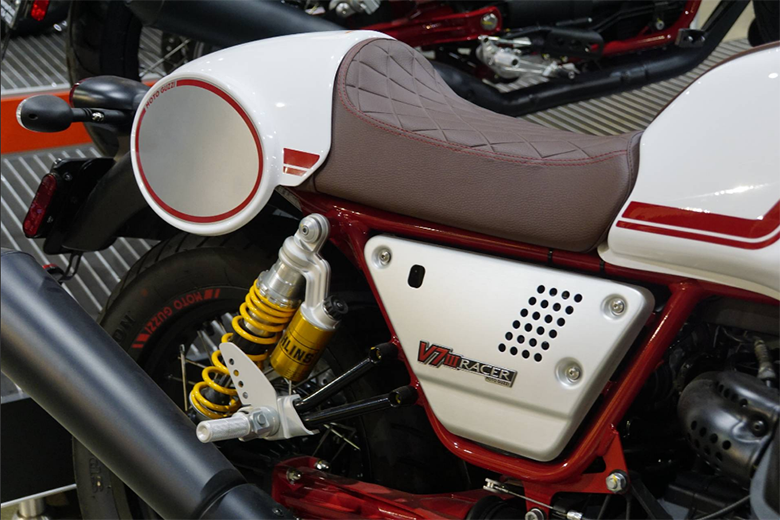 The racing aspect of the V7 III Racer is accentuated by its semi-handlebars and magnificent, humped seat. The Racer seems to be a single-seater sport bike in appearance, but in fact, this updated version is certified for two-up riding. It does have passenger footpegs, and the seat cover may be simply removed when required, like previously.

The pervasive usage of anodized black aluminum is one of the most distinguishing elements of this “factory special” worth highlighting. The new side panels and throttle body shields use this hand-crafted finish, which requires exceptional artisan talent, while the new front number plate is composed of brushed aluminum.

Like the brand’s other sport models, including the Audace muscle bike, the spoked wheels feature black channels and red Moto Guzzi stickers. The set-back footpegs, which are machined from solid billets, the lightened steering stem, and the steering yoke protection are all quality features.

The V7 remains Moto Guzzi’s entry-level model, despite a 10% boost in power thanks to a new 90-degree transverse V-twin engine–a one-of-a-kind layout.

The V7 III Racer keeps the original V7’s aesthetic identity but with a considerably more mature and muscular attitude, thanks to the presence of the twin-pipe exhaust manifold and more oversized cylinder heads.

However, other aspects should remain the same, such as the 5.5-gallon metal gasoline tank and the look inspired, as usual, by the great 1971 V7 Sport. The aluminum gasoline cap is no longer flush with the tank line, but it is still a screw cap with a lock, as it was before.

The chassis of the 2017 Moto Guzzi V7 III Racer has been overhauled. The steel frame retains the dismountable twin cradle arrangement and weight distribution (46 percent front; 54 percent rear) of its predecessor, but the front component has been entirely overhauled and strengthened.

The updated steering geometry on the V7 III Racer chassis ensures more dynamic cornering, quicker handling, and stability–a configuration that fits all of the contemporary biker’s riding demands. In addition, the whole structure has benefitted from a meticulous finishing operation on the details, such as the welds and painting.

Kayaba shock absorbers with adjustable spring preload are new for 2017. Even while riding two-up, this revised suspension configuration gives a more progressive and controlled response in every condition. A changed sitting posture and relocated footpegs, lower and further front, increased passenger comfort.

There are several outstanding two-cylinder engines globally, but only the Moto Guzzi twin is a transversal V-twin. This transverse powertrain was developed in 1967 as a result of Giulio Cesare Carcano’s brilliant idea, and it was distinguished by a cylinder arrangement so unique that it became an intrinsic element of the bike’s appearance, much like a real contemporary art metallic sculpture.

The engine in the mid-weight V7 has reached its third iteration, and it has been completely redesigned in comparison to the previous one used in the V7 II. This third evolution was created to maximize road ride pleasure and fun while ensuring higher performance and reliability.

A redesigned oil sump and a crankshaft with inertial calculations for smoother revving and better engine braking are used in the V7 III Racer’s aluminum crankcase, strengthened in crucial areas. The crankcase lubrication system was created to distribute heat and minimize power absorption, resulting in improved performance and lower fuel use.

The revised ventilation system on the V7 III’s 744cc engine decreases power loss caused by internal pumping of the crankcase chambers and a lower capacity oil pump capable of absorbing less power. The new oil pump intake duct is new, as is the associated by-pass valve, and piston cooling oil jets with flow control and management valve have been added. The alternator cover has been replaced as well and now has a built-in exhaust blow-by. 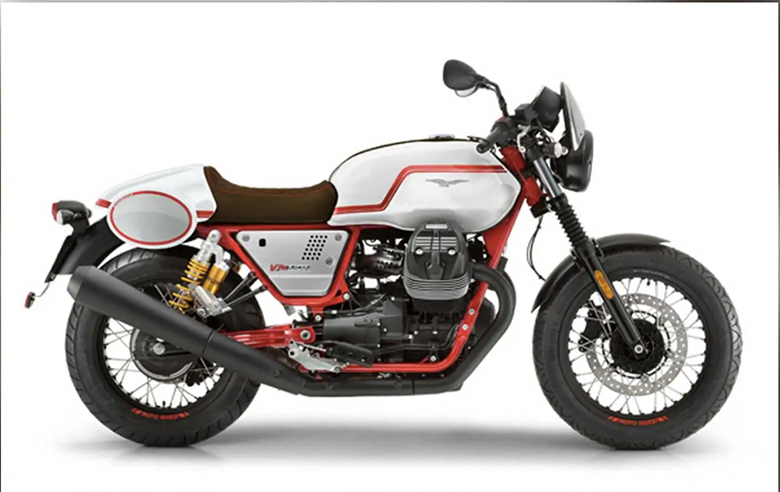 Although the diameter and stroke measurements are the same as the previous unit (80 x 74mm), the Racer’s engine boasts new aluminum heads, pistons, and cylinders, confirming the V7 III’s aim as the Moto Guzzi entry-level motorbike. The timing is regulated by a pushrod and rockers system with two valves per cylinder, which are now positioned in an angled position in the head (which is more efficient).

Maximum power has been boosted to 52 horsepower at 6200 rpm and 44.2 ft/lbs of torque at 4900 rpm, with a perfectly flat torque curve that promises the comfort of use paired with that distinctive Moto Guzzi character and rapid reaction.

The Moto Guzzi engine also has a dry single-disc clutch, which improves durability and dependability over time. The grip was meant to be used with a bit of pull on the lever, enhancing the V7’s entry-level rider appeal.

The precise and smooth six-speed gearbox introduced on the V7 II remains unmodified. Still, it now has a revised first and sixth gear ratio, which is helpful for fully exploiting the engine’s torque and power characteristics.

The ABS of the V7 III Racer is adjustable, and the MGCT (Moto Guzzi Traction Control) system may be turned off. The ABS is a two-channel Continental system that keeps the wheels from locking up during hard braking, and the two-level traction control (wet or dry conditions) keeps the rear wheels from spinning during acceleration.

For the new V7 III Racer, the Moto Guzzi multimedia platform is offered as an option. With the MG-MP, you can link your bike to your smartphone. Your smartphone (iPhone or Android) becomes a genuine sophisticated onboard multipurpose computer. The connection between the car and the Internet thanks to a specialized application downloaded for free from the App Store and Google Play. 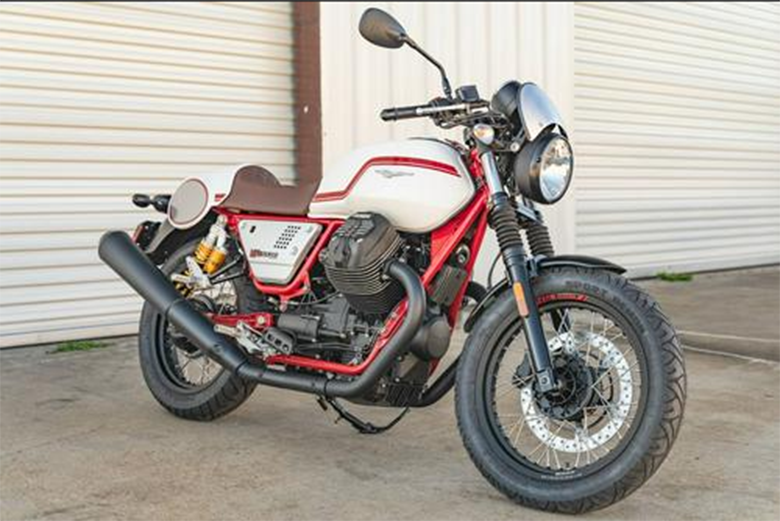 The new Moto Guzzi 2020 V7 III Racer Limited Edition Street Bike is among those motorcycles that have not only retained the classic heritage but it is offering high-performing engine and the latest technology. The bike has got stylish appearance and outstanding agility that constantly demands to have another view.