Today, I have decided to through some light on the comparison review between the two most deadly sports bikes i.e. KTM Super Duke vs Aprilia Tuono R. These two bikes are famous for their ultimate performance, speed, thrill ride and stylish look. The Super Duke of the KTM brand is famous for the aggressive and naked look while the Tuono R is famous for ultimate performance. In this article, we will further find out which bike is the best of these two and which will win the contest.

The Aprilia Tuono R features an updated 07 engine and chassis. It contains the latest V60 Magnesium Evolution engine launched from the RSV Mille Factory. It is basically the powerful 998cc, four-valve-per-cylinder, liquid-cooled with a 60-degree engine. Its unique design ensures to deliver more horsepower and torque than the previous models. The one purpose of using Magnesium moniker is to achieve the minimum weight of the engine. It features the large exhaust valves i.e. 31 mm to 33 mm, larger header diameter with revised and better fuel-injection/ignition mapping.

The KTM Super Duke is largely known for its naked and aggressive look. It features the 999cc, liquid-cooled 75-degree Twin engine which is quite similar to that used in 950 SM. Its displacement and efficiency of fuel-injection have been increased by making small changes in the engine.

If someone looks at the specification of both of these bikes on paper, then one can say that there is no big difference and it would be the tie between KTM Super Duke vs Aprilia Tuono R. Some expert would say that the Aprilia can easily leave behind the KTM due to its significant 10-pony advantage up top. The Super Duke, on the other hand, delivers more power and torque on the rev range to 8000 rpm. This is the time where Aprilia Tuono R gives its maximum torque but at that point, the KTM Super Duke may leave it far behind. The amazing fact is that the Super Duke takes only 29 seconds to reach from 0-60 miles as compared to the 2.9 seconds of Aprilia Tuono R.

On the road, the two bikes present the entirely different picture of their abilities. The KTM is good at torque and instant response in city traffics and tracks. Its torque curves allow the rider to have short-shift to keep the acceleration building. The Aprilia Tuono, on the other hand, has more power but it requires the rider to ride accordingly. This simply means that the engine needs to rev harder to get the same drive. On open roads, the Aprilia Tuono R will run faster than KTM Super Duke showing the pure racing heritage. 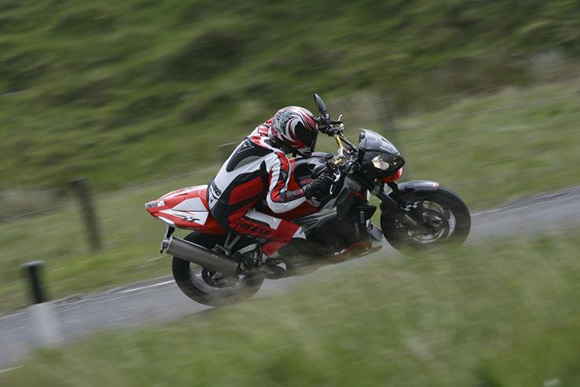 The fuel-injection response of Aprilia Tuono R is amazing almost everywhere except at the bottom just above idle. The Super Duke Fuel-Injection is extremely responsive everywhere but its throttle action is lighter. The vibration level of both engine is very low. The Aprilia’s AVDC (Anti-vibration double countershaft) shakes better than the single counterbalancer of KTM. The clutch of KTM is linear than the clutch of Aprilia that helps in quick escapes. The transmission is also carefully designed and is excellent. The Aprilia gives slightly irritating between first and second but the KTM gear shifting ratios are very impressive. If someone looks at the performance of chassis then it would be close match. Both of these bikes provide the greater commanding seating position so that rider can have better view of track and traffic. The footpegs of Tuono R have been placed slightly higher and more towards the rear section so that rider can feel sportier while the small windscreen have been perfectly placed to provide better protection than that of Super Duke. The headlight of Super Duke plays an important role in making the perfect streamline shape to have a minimum air drag. The seat height of Tuono R is an inch lower than the 33.3 inches of KTM’s seat, which makes it easier for the riders to reach ground. The saddle on the Tuono is comfortable but the Super Duke’s footpegs gives an ultimate riding position that allows the rider to have long distance ride with maximum comfort. Normally, people think that handling of sports bike would be tricky and requires a lot of practice and experience but the Super Duke has surprised the experts due to its ultra-responsive and quick steering manners. This bike is very easy to handle during corners and in traffic. The Tuono R’s steering is very light and a bit stable. The Super Duke has almost half of inch longer wheelbase (57.2 inches vs 56.6 inches) and slightly less trail (3.9 inches vs 4.1 inches) with steeper rake (23.9 degrees vs 25 degrees). Both of these bikes comes with the best braking system, both have Brembo four-piston radial-mounted calipers with twin 320 mm rotors. The only difference is that the Super Duke gives more initial bite than Tuono R, the Aprilia takes more lever travel before clamping gets aggressive. Both bikes have almost same braking system specifications and it is very difficult to declare the best one. At last, it was really hard to pick the best among the comparison review of KTM Super Duke vs Aprilia Tuono R. The KTM Super Duke is comparatively new and infect is the first year model and there are some chances that is would be better in near future while the Aprilia Tuono R on the other hand is worldwide known for its performance and agility. So, the Aprilia Tuono R won the battle between KTM Super Duke vs Aprilia Tuono R but the war between these two competitors have just begun. 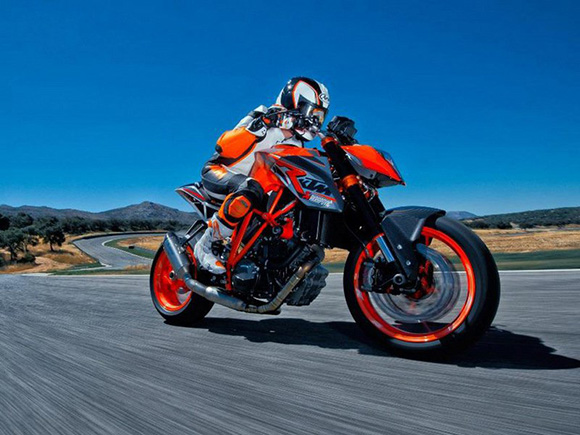 This article is about the comparison review of KTM Super Duke vs Aprilia Tuono R and it was the first time in the history of www.bikescatalog.com that the expert team got worried about considering which one the best. All in all, the Aprilia Tuono R has won the comparison review by examining several indicators. The KTM Super Duke, on the other hand, has potential to give a hard time in future but no one can deny that both of these bikes are amazing in one way or another.