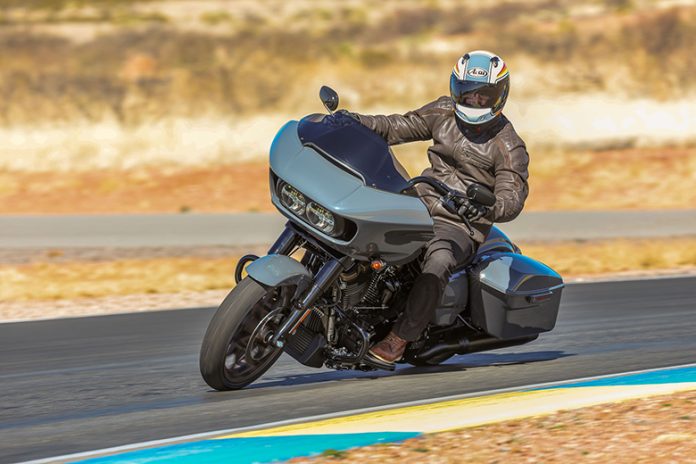 Harley-Davidson cultivates the “performance bagger” build within its Grand American Touring ranks with its new-for- Harley-Davidson 2022 Road Glide ST Touring Bike. It is the fixed-fairing sibling of the 2022 Harley-Davidson Street Glide ST, and it rocks much of the same yummy goodness with the powerful Milwaukee-Eight 117 to push it all down the road. Infotainment and luggage come in stock, but the factory holds its cornering-sensitive rider aids in reserve as part of the optional gear package. 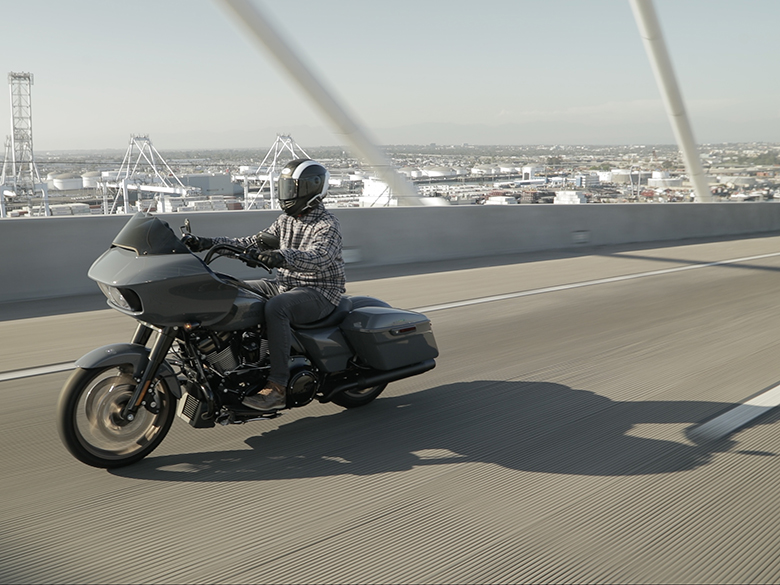 Credit where it’s due, Harley-Davidson recently made moves to become more competitive in the modern market, and the new Road Glide ST (FLTRXST) model is an excellent example of where the MoCo is headed. Like the rest of the FL frame family proper, this machine is at the heavier end of the spectrum with plenty of visual weight to go along with the actual weight that tops out at 842-pounds soaking wet.

Custom vibes abound, starting with the cut-down front fender that is well short of the typical full fender we see on many more giant machines. There’s no shortage of blackout paint either, which covers all but the sheet metal and chrome pushrod tubes.

Dual Daymaker LED headlights split the night with authority for adequate, two-way visibility. Of course, the blinkers are also diodes, so you can be confident that the surrounding traffic can discern your intentions. While the front turn signals are well out of harm’s way, I can’t help but think it would be a more finished look if the blinkers were integrated with the mirrors or at least recessed in that Sharknose fairing. Wink, nudge H-D.

The smoked windscreen is non-adjustable and cut relatively low for more custom yummy goodness. Plus, the factory gave it a generous Splitstream vent to smooth out the turbulence up top that leads to the dull head-buffet effect. Around behind the screen is a quartet of round analog gauges backed up by a 6.5-inch color TFT display that handles the Boom! Box GTS audio system with two fairing-mount speakers and hidden radio antenna, complete with real-time GPS and weather support so you’ll never have to stop to ask for directions or get caught out in the soup. 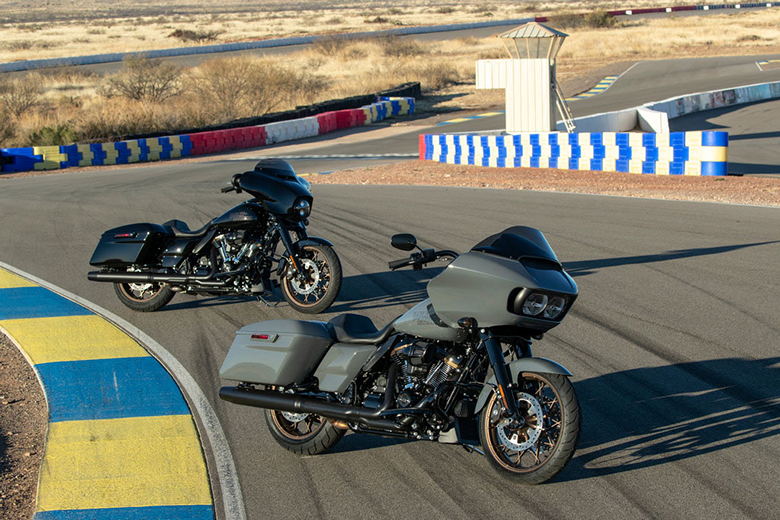 The six-gallon fuel tank bears a vestigial console, but since the speedo is mounted elsewhere, it has been relegated to serving as just another piece of trim. Not so with the abbreviated engine guards; they still do their traditional purpose while adding more to the custom vibe.

A deep-bucket solo seat cradles the pilot with enough rise in the back to stay contained, even with the power and acceleration this bike brings to the table. The solo seat leaves the rear fender looking clean, and the hard-side saddlebags are reduced in depth to reinforce that look and leave the 2-into-1 exhaust well visible on the right side. More piercing LEDs in the taillight and rear turn signals ensure you are well visible to the traffic behind you.

The factory used mild steel components for the box-backbone main frame and yoke-style swingarm on the Harley-Davidson 2022 Road Glide ST Touring Bike. The layout is also typical with tubular-steel members that make up the double-downtube/double-cradle assembly that fully supports the drivetrain rather than using it as a stressed member.

Fat front forks are made to look fatter yet by the beercan fork skirts that hide the 49 mm inner fork tubes, and the factory went with Showa’s Dual Bending Valve forks for a superior ride to that of plain vanilla forks. That isn’t as good as adjustable forks, so there’s room for improvement, but it’s better than nothing, I reckon. 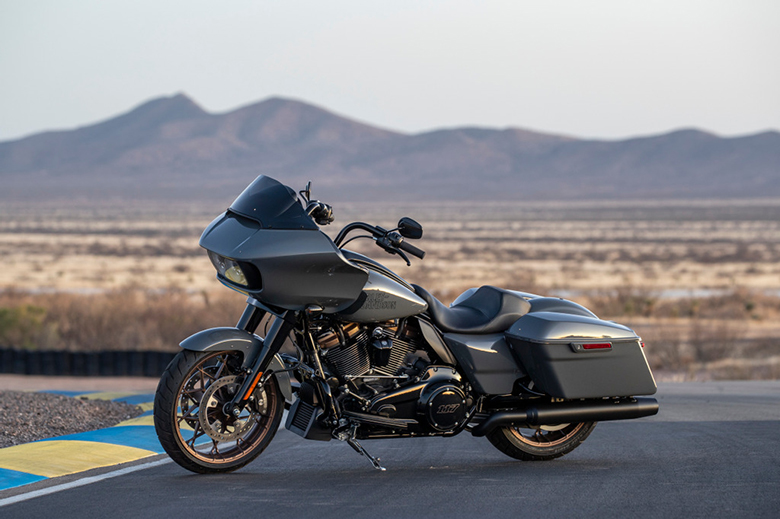 Cast-aluminum Bronze-Prodigy wheels roll with a Matte Dark Bronze finish as one of the few non-monochromatic components. Emulsion-type shocks float the rear end with a hand-adjustable spring-preload feature for quick and easy setup after changes in cargo/passenger weight. The wheels mount Dunlop H-D Series black walls in a 130/60-19 ahead of a 180/55-18 with an “H” rating that will tolerate speeds up to 130 mph, which is significantly above the actual governed top speed, so you can rest assured that the hoops will take everything you and the bike can dish out, and more.

Rake and trail are a mixed bag. The 26-degree rake is a skosh short for a touring bike, but it does play into the performance aspect quite nicely by helping it dive into the corners. However, the 6.7 inches of trail is at the other end of the spectrum, making the Road Glide ST stable in crosswinds and when negotiating the pressure waves from the surrounding traffic. Lookin’ at you, big rigs.

The saddle rests 26.7 inches off the deck, providing you have the 180 pounds of bodyweight to get the suspension adequately compressed, and this leaves even short riders with an easy reach to the ground for both feet.

As for the anchors, the factory didn’t hold back. It chucked on all-around 300 mm discs with dual, four-bore calipers up front ahead of another in the rear for plenty of overall braking power. Additionally, H-D adds some safety electronics at this point with stock ABS and its own proprietary Reflex Linked Brakes that combine to improve stability under heavy braking actions. 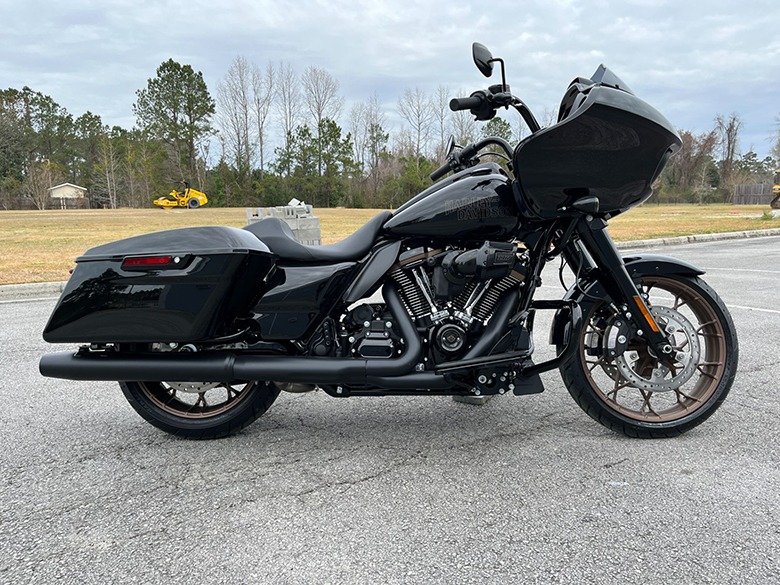 Like a gemstone in a setting, the Milwaukee-Eight engine is the real selling point, making the Harley-Davidson 2022 Road Glide ST Touring Bike trend toward the power-cruiser/tourer segment. This relatively new engine returns to the single-cam valvetrain which gives it that classic pushrod-tube geometry as opposed to the Twin-Cam, for instance. That geometry along with the old-school nosecone and 45-degree Vee brings the sexy back to the Big Twins. While form should always follow function, this is a Harley-Davidson, so engine aesthetics come into play. 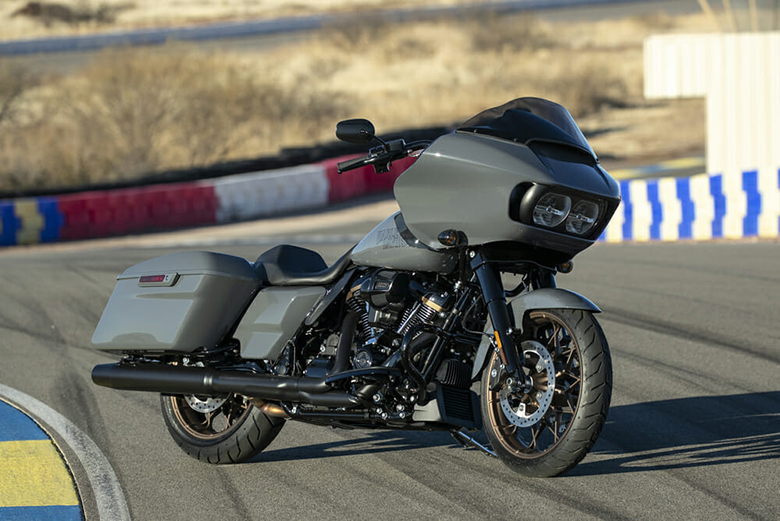 Slightly under the square, the mill runs with a 103.5 mm bore and 114.3 mm stroke for a total displacement of 1,923 ccs (117 cubic inches) and a 10.2-to-1 compression ratio that should probably handle mid-grade pusholine just fine. Torque is clocked at 127 pound-feet at the 3,750 rpm mark, which is plenty of grunts to pull this thing off the line and deliver decisive passes on the super slab.

The four-valve heads allow for efficient aspiration while the engine is fed fresh air-fuel charges through the single throttle body and Sequential Port Fuel Injection that meters the same. A comprehensive, chain-type primary drive and slipper clutch couple engine power to the six-speed, Cruise-Drive transmission and provide some more security for your rear contact patch, plus the clutch has a relatively light pull to give your left hand a bit of a break.

A carbon-reinforced belt drive sends power to the rear wheel, and once the final-drive ratio and engine governor are factored in, you can expect to wring around 105 mph out of the thing. The electronic support doesn’t extend to the drivetrain, not on the stock version anyway, but if you like, you can spring for a lovely electronics suite as an option. It includes the corner-sensitive version ABS and Linked Brakes along with traction control and Drag-Torque mitigation to bolster the rear traction integrity. A Vehicle Hold Control comes with the package for extra safety and stability at stops on a grade.

Paint and price go hand-in-hand, which is typical for H-D. As usual, the Vivid Black comes in with a $29,999 sticker, while the “color” option, Gunship Gray, adds another $575 to the sticker shock. Both packages come built over excellent blackout treatment for more custom flavor, along with a Bronze rocker-box spacer that ties the engine to the wheels.

Since Indian has deep historical roots to draw upon, the Challenger Dark Horse has an authenticity that is impossible to copy or fake with a handful of Easter Eggs sprinkled throughout. It includes, but isn’t limited to, the War Bonnet fender ornament and classic Indian head graphic on the fuel tank.

Indian has its infotainment system, the subscription RIDE COMMAND feature, that meets Harley point for point and includes Smart Lean Technology. Too bad for H-D, Indian consists of this with its standard equipment package for an arguably safer rider off the showroom floor. 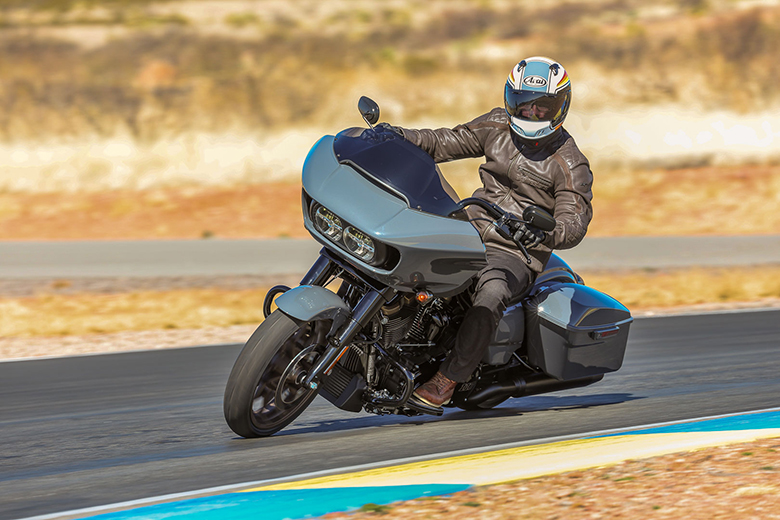 Indian ramps up the pain for H-D with a solid handful of paint packages that include three solid colors and three two-tone boxes to leave the Harley looking a bit boring to look at. Fixed front fairings are constant across the board, and to be honest, they define the bike since everything aft of the front fairing is more-or-less the same as the fork-mount fairing models.

Indian powers its entry with the liquid-cooled PowerPlus V-twin engine that has a 1,768 cc displacement, smaller than the Mil-8, but manages to generate even more grunt with 128 pound-feet on tap.

Both manufacturers tie paint and price together, so the Challenger Dark Horse comes in a range from $28,999 through $31,499 to land all around the Road Glide ST’s sticker. 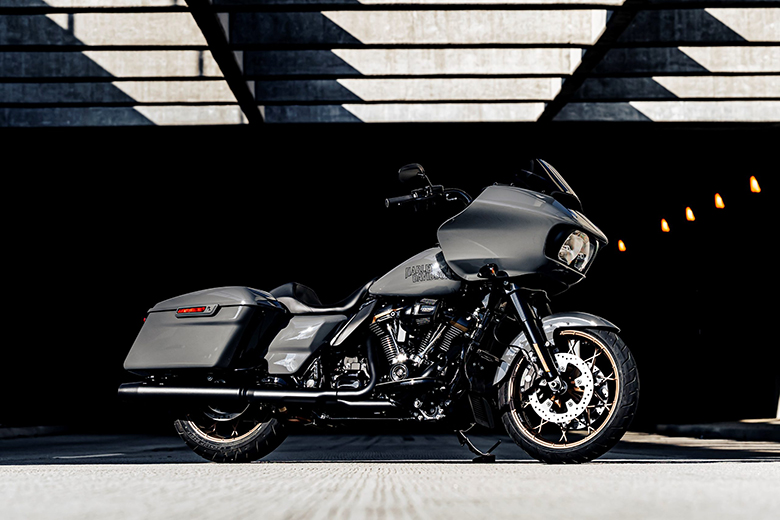 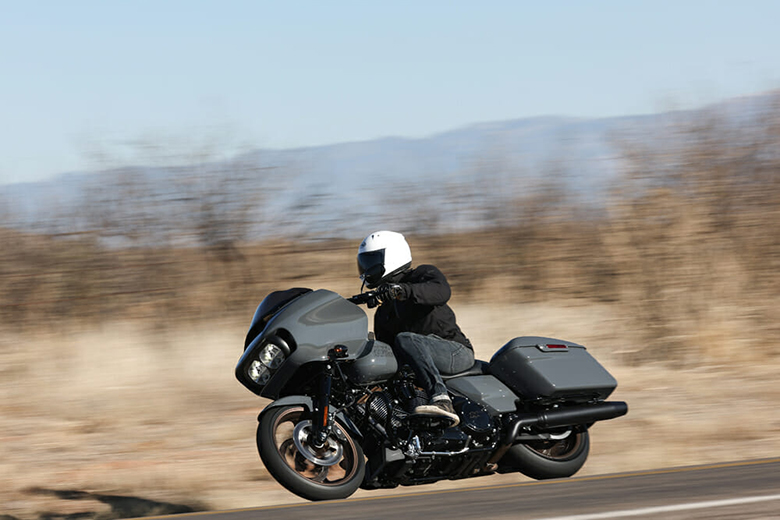 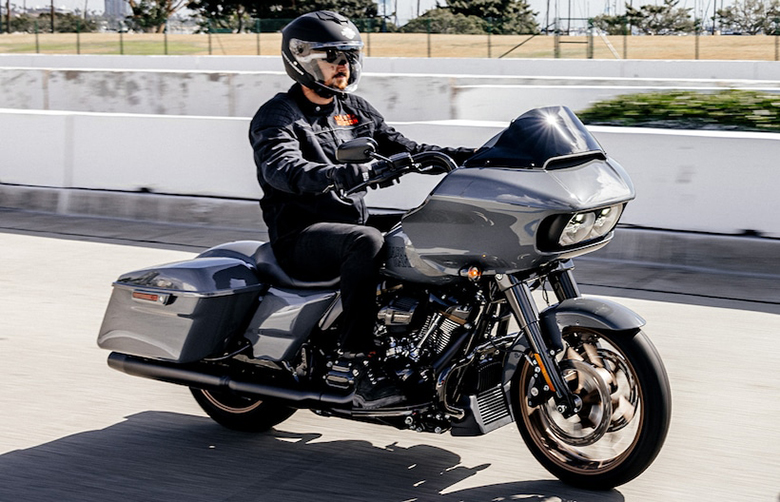 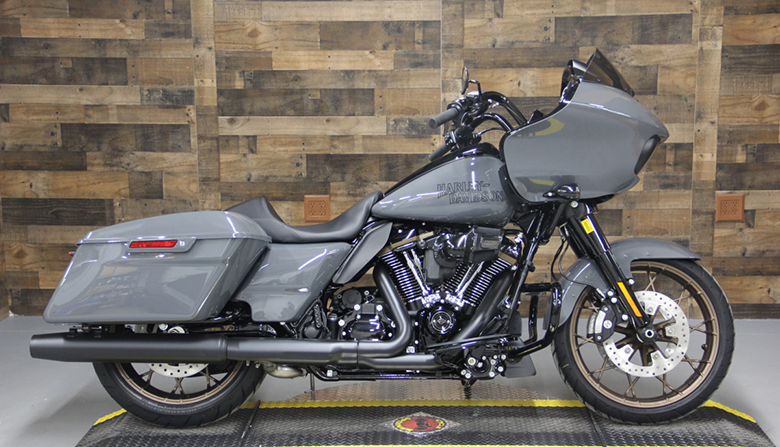