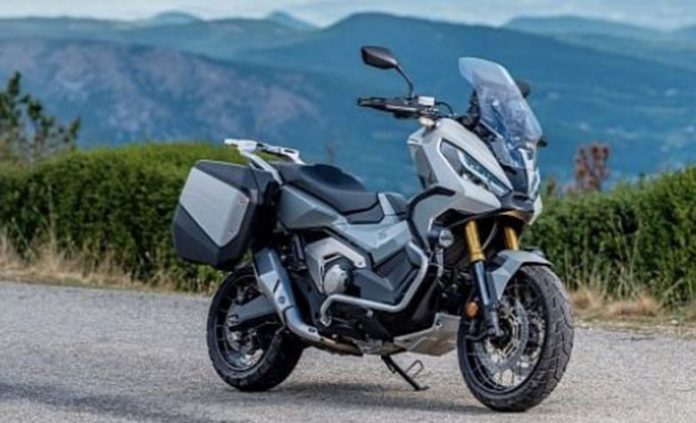 The 2022 Honda X-ADV Dual Sports Motorcycle was the initiator of the interaction. Hit rock bottom and showed everyone the way. It’s a two-wheeled SUV that defies convention by fusing the features of an adventure motorbike with those of a large-capacity scooter, making it comfortable and convenient for daily travel. With the X-ADV, every ride is a one-of-a-kind adventure. This premium urban explorer can zip from a city block to an off-road path (and back) in seconds and we improved upon it entirely. 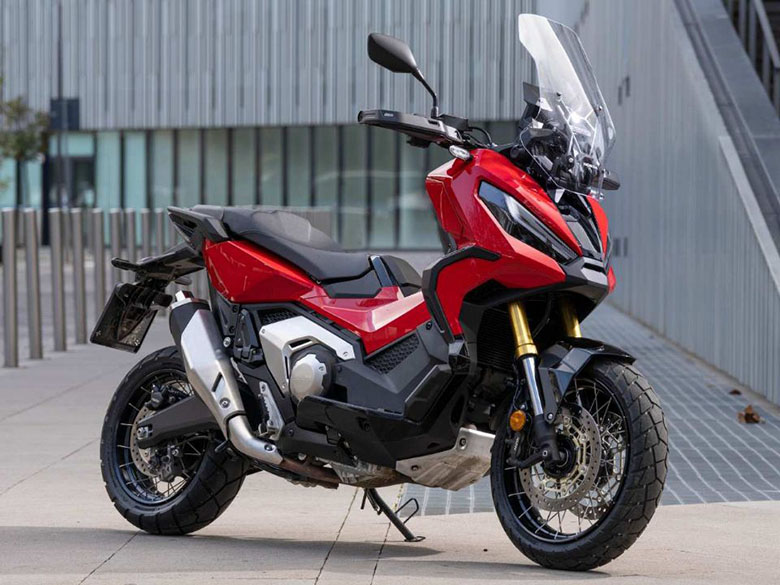 We’ve improved the X-ADV to make it suitable for various scenarios. The revised bodywork complements the X-signature ADV’s rough look while also making it more straightforward to reach the ground from the modified seat. It’s a secret stash of extra space and a USB Type-C port for charging. High-visibility DRL is built into each headlight, and the full-color TFT panel makes adjustments a breeze. The new Honda Smartphone Voice Control technology (only compatible with AndroidTM smartphones) allows you to integrate several smartphone features, including navigation, calls, messages, and music. You can thus never be wholly cut off from the rest of the world.

We have increased the rpm limit and power from the 745cc, twin-cylinder engine for a thrilling rush around the rev counter. Four preset riding modes with Throttle by Wire (TBW) control to fine-tune the performance for different environments and surfaces. And the X-ADV is adaptable; you may adjust the Dual Clutch Transmission (DCT) shifting schedule, the Honda Selectable Torque Control (HSTC), and the number of anti-lock brakes (ABS). 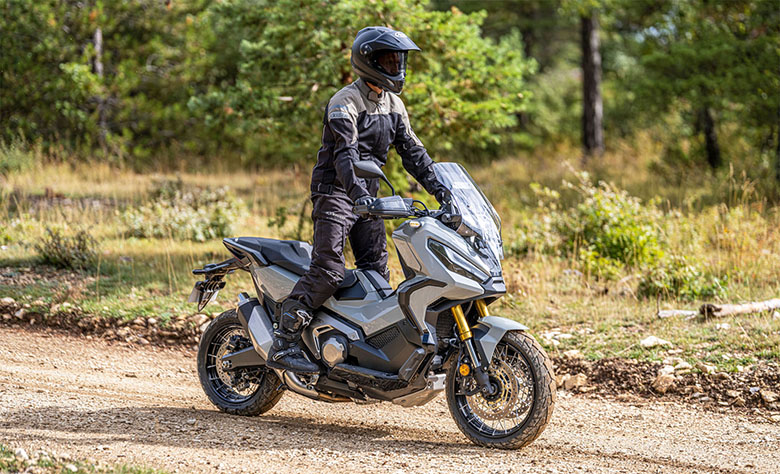 After a significant overhaul in 2021 that added power while cutting weight, 2022 brings three new, stylish color choices for the revolutionary X-ADV. Throttle-by-wire control, four preset riding modes, and three levels of Honda Selectable Torque Control are all part of the package. A USB charger is included inside the 22L under-seat storage, and a glovebox provides even more storage space. A 5-inch TFT screen enables smartphone communication with the Honda Smartphone Voice Control System, and the dual LED headlights incorporate Daytime Running Lights.

The X-ADV is powered by a liquid-cooled, SOHC 8-valve parallel twin-cylinder engine designed to provide strong low- and mid-range acceleration. Its high-inertial-mass crankshaft, along with its comparatively long-stroke design and uniquely formed combustion chambers, allows it to generate massive quantities of accessible torque at very low engine speeds. The center of gravity is lowered by a forward cant, increasing stability.

There is a 35kW version for those with an A2 license, and a Honda dealer may simply upgrade it to the full-power version when the time comes. A Honda dealer may also reduce the maximum power output of the high-output model to 35 kilowatts (kW) by reprogramming the engine control unit (ECU).

The dual balancers dampen vibration caused by inertia at higher RPMs without masking the distinctive ‘throb’ produced by the engine’s atypical firing pattern and 270° phased crankshaft. This engine has a 77mm bore and an 80mm stroke. The water pump is driven by the camshaft, while the oil pump is driven by one of the balancer shafts, both of which are multi-purpose. The engine is lightweight, efficient, and dependable by reducing the number of moving components.

With TBW in charge of engine performance and personality, riders may choose four modes tailored to their needs. The switchgear on the left is responsible for selecting the active mode. STANDARD provides a happy medium between the power delivered by the engine, the amount of engine braking, and the amount of HSTC and ABS involvement. The engine power delivery and engine braking in SPORT are more forceful, with less HSTC involvement and more fabulous ABS. Due to the reduced power supply and engine braking sent by RAIN, the HSTC and ABS input are increased. Engine braking and high power are used in GRAVEL, together with low HSTC and ABS.USER provides three user-selectable levels of HSTC, from low to medium to high, and three levels of engine power output, from high to low and from low to off. 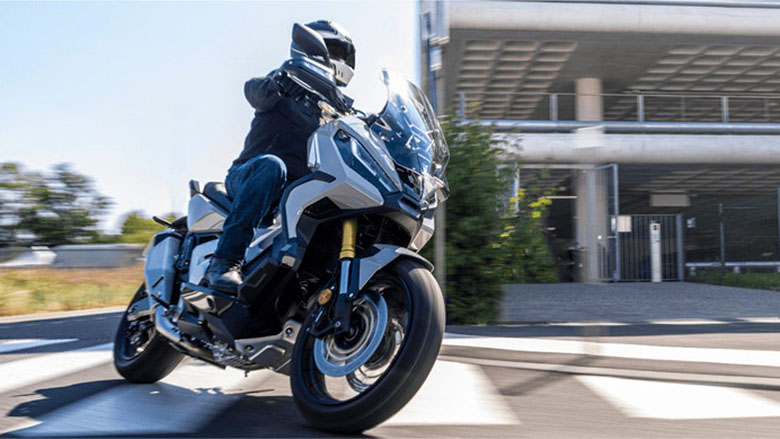 Using TBW to regulate torque at the rear axle, Honda’s Selectable Torque Control (HSTC) provides a high degree of maneuverability. When driving on gravel or dirt, for example, the first, less-intrusive setting lets the rear wheels spin a little bit. The standard setting is Level 2, which gives you enough grip for most rides. Increase the traction control to the highest setting, 3 (Maximum), on slick roads. It is also possible to disable HSTC. Different shifting schedules connect with riding modes in a dual-clutch transmission (DCT). In the user mode, you may choose between four intensity levels ranging from gentle to harsh.

Over 200,000 Honda motorcycles and scooters equipped with Honda’s DCT technology have been sold throughout Europe. It’s easy to operate and provides smooth, fluid shifts between higher and lower gears. It has two clutches, one for the first three gears (first, third, and fifth) and the other for the next three (second, fourth, and sixth) for efficient packing.

Honda’s research and development team in Italy devised and developed the X-distinctive ADV’s eye-catching design, and in 2021 they made it even sleeker and sharper. The proportions are still purposefully proportioned, but they have been fine-tuned to convey a more determined stance.

Daytime Running Lights (DRL) are integrated into the dual LED headlights to provide a constant, brilliant beam of light regardless of the time of day or weather conditions, significantly boosting visibility and safety. In this establishment, only LED bulbs are used.

Because of its ergonomically optimal 820mm seat height (designed for a comfortable ground reach) and 910mm broad handlebar, riders will have a comfortable and unobstructed field of view. The X-screen ADVs can be moved without tools between five different settings, from low to high, to increase or decrease the amount of wind resistance during commuting or road trips. There is a rake of 11 degrees and a variation in the height of 139 millimeters between the highest and lowest locations.

The Honda Smartphone Voice Control System is integrated into the X-rider ADV’s interface. It is shown on the bike’s 5-inch TFT screen to enable the rider to control their smartphone’s functions, such as phone calls, email, music, and navigation, by voice. The smartphone pairs with the dashboard through Bluetooth, and the headset is fitted inside the helmet; the driver may also control the system via buttons on the left switchgear. 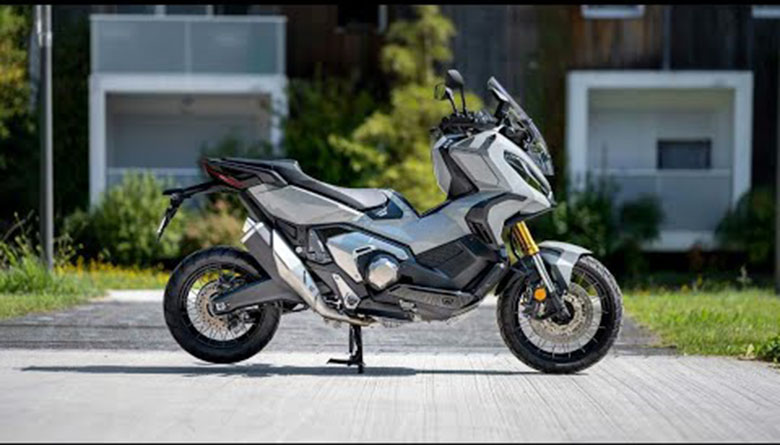 Off-road, your hands and levers need protection from the elements, so invest in some sturdy plastic hand guards. The bottom is protected with a shot-peened aluminum bash plate that is 2.5mm thick.

The 22 liters of storage area under the seat is illuminated by an LED whose textured surface provides consistent lighting without glare and can fit a full-face helmet. In the back of the storage area, you can find a USB charging port. The X-ADV comes included with a center stand, which has a tilt sensor that prevents the bike from falling over while parked on an incline.

The X-Smart ADV’s Key, which the rider keeps in their pocket, serves as the key for the bike’s ignition, fuel cap, and seat. With the Smart Key in place, turning the main knob switch activates the bike and allows the rider to operate the ignition/steering lock and, using two rocker switches, the fuel cap and the seat. The ‘answer back’ feature locks and unlocks the supplementary Smart Top Box, and the indicators flash for far-range identification. The levers can’t be opened by brute force thanks to a clutch in the primary switch.

In 21YM, the X-ADV got a new tubular steel diamond frame that reduced weight by 1kg and made more room in the trunk.

There has a 1590mm wheelbase with a rake of 27 degrees and a tail of 104 millimeters. The steering angle of the X-ADV is 39 degrees, and its turning radius is under 2.8 meters so that it can be maneuvered easily, even in congested areas. The 165 mm of ground clearance is complemented by the long travel suspension (153.5 mm in the front and 150 mm in the back). The total wet mass is 236 kg.

The 41mm cartridge-type USD fork has adjustable spring preload and rebound damping, making it suitable for rugged terrain. The aluminum swingarm, made up of a machined-hollow cross member and U-shaped (in cross-section) components, is controlled by the spring preload adjustable rear shock through Pro-Link.

The X-suspension ADV is designed to absorb bumps smoothly on the road thanks to the 17-inch front wheel and 15-inch rear wheel, constructed with rust-resistant stainless steel spokes. Tires with a block design provide a smoother ride, and the L-shaped valve stems simplify maintenance. Front and rear tires measure 120/70 R17 and 160/60 R15, respectively. 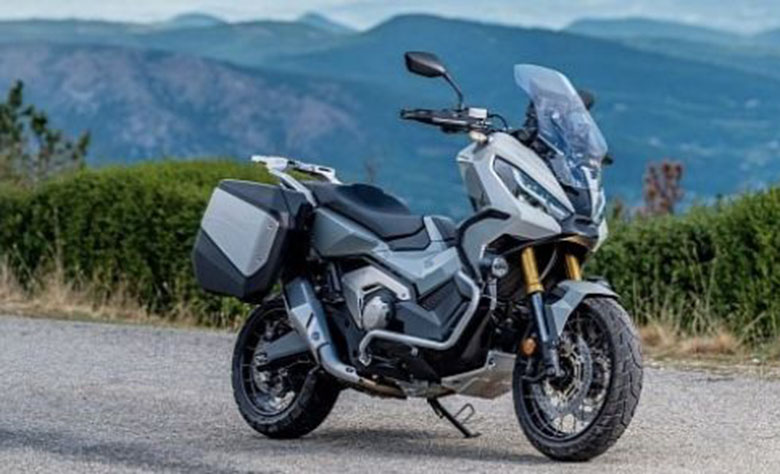 A pair of opposed four-piston calipers clamp brake discs with a diameter of 296 millimeters mounted radially.