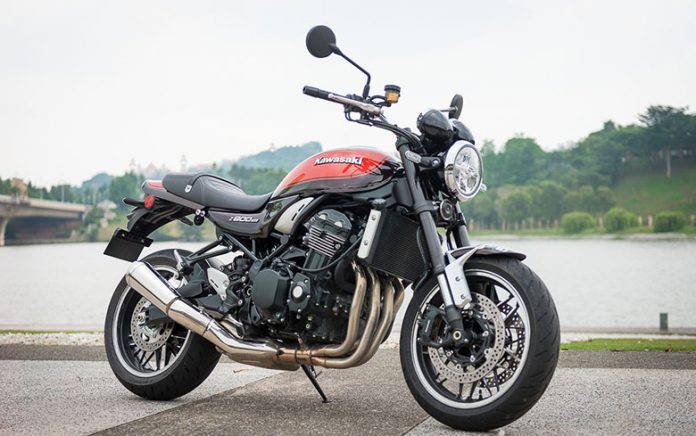 Kawasaki has spent a lot of time making the 2019 Kawasaki Z900RS Street Sports Bike look and feel just like the original Z1, but with a bit of modern technology and features thrown in for good measure. To make the Z900RS a well-rounded motorbike, it was made for riders who want a bike that is both old and new. It has a 948cc in-line four engine, a modern trellis frame and electronics, and modern suspension parts that make it the best retro sportbike on the market. The Z900RS was built with a lot of care by Kawasaki, from the teardrop gas tank to the straightforward, clean engine design to the retro-themed headlight and tail cowl. For 2019, the Z900RS comes in Candy tone Brown and Candy tone orange paint schemes. The MSRP is $11,199.

The Kawasaki Z900RS ABS motorcycle brings back the classic style of the original Z1 900 motorcycle. It has simple bodywork and no fairing for a pure retro-style look, while the line comes with a 948cc engine and modern technology for a classic and contemporary ride that’s both old and new.

A lot of work was done to the engine to make it different from the one in the Z900. It means that while the Z900’s engine is speedy and sharp, the Z900RS was tuned for low- to mid-range power. It means that it has a lot of torque that helps riders of all skill levels stay in control. The engine is more robust below 7,000 rpm than the Z900. There are different cam profiles for the intake and exhaust cams. The intake cams have shorter durations (270 to 248 °), and the exhaust cams have shorter (256 to 244 °). The engine has a smooth and robust response, making it very easy to use. The compression ratio is down from the Z900’s 11.8:1 to 10:8 to match the shorter valve openings. The Z900RS has a crankshaft with a flywheel mass about 12% heavier than the Z900. It helps make the Z900RS feel smooth. An open deck on the top of a die-cast cylinder block makes it more rigid, making it more stable, and saves weight. When you connect passageways between the cylinders, you cut down on pumping loss, which improves high-rpm performance.

A unique casting process is used to make the pistons for the Ninja H2TM and H2TMR. This process is also used to construct pistons for other bikes. The process makes hollow areas to get the right thickness for lighter weight without sacrificing strength. Downdraft intake design gives the fuel mixture the shortest, most direct route to the combustion chamber to help it run better. Stylish fins assembled into the cylinder head help to make the car look like it has an air-cooled engine, which makes it even more like the original Z1. It also has die-cast aluminum engine covers that look like the Z1s. The clutch cover and many other parts have Z1 motifs on them. 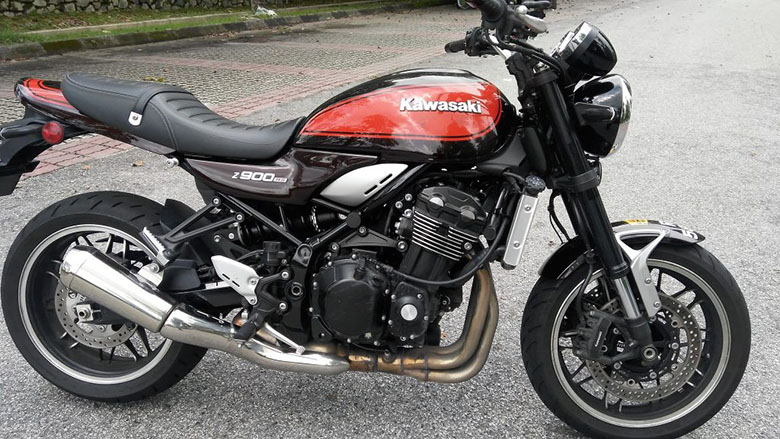 36mm throttle bodies are used because they have a tremendous mid-range response, which is why they are used. Those valves in front of the main throttle valves are called sub-throttle valves, and the ECU controls them, so the EFI system has a smooth and sensitive throttle response.

Sound research was done to come up with the best exhaust note for the engine’s sounds when it first starts up, at idle, and when the bike is slowing down. Using dual-wall header pipes gives the exhaust a bolder look, making them less likely to fade over time from heat. The 4-in-1 exhaust with a short megaphone muffler adds to the retro look and improves the sound of the exhaust. In this case, the exhaust system is made of high-quality stainless steel that has been triple-buffed to give it a shiny look. The pre-chamber helps center the weight, reduces the size of the muffler, and makes the exhaust sound better. 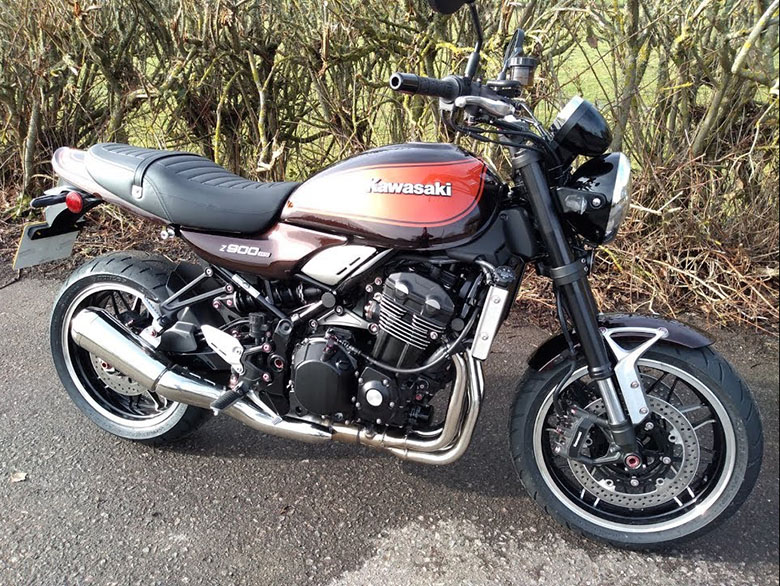 Gearing is made for the Z900RS’s engine. The first gear is smaller than the Z900, making it easier to get going from a stop. A more extended sixth gear lets the engine run at a lower rpm when it’s not moving—cruising at highway speeds to improve the rider’s comfort. It is the Kawasaki Traction Control System (KTRC) (2-MODE). The two-mode system improves sport riding performance and rider confidence by making it easier to ride on slippery roads. The operator can also choose to turn off the machine. Mode 1 has highly complex software that allows a little wheel slip to help the car go faster.

The system looks at many things to get a real-time picture of what is going on: rear and front wheel speed (slippage), engine, machine, and rider inputs are all looked at. When traction conditions are about to get nasty, a complex analysis tells the system what to do before the wheel slips out of the range for good traction. Mode 2 is more sensitive and controls the ignition timing, fuel, and air for a very smooth operation. The system has very little hardware but a lot of complicated software. It doesn’t need the engine ECU, so it only needs sensors for the front and back wheels to make it light.

Using Kawasaki’s advanced analysis technology, the trellis frame was made to fit the small teardrop fuel tank and make the retro-style handling ideal for having fun while riding at a slower speed. With the Z900, the car’s front is raised, and the back is lowered. It gives the Z900RS a neutral, or even, stance because it increases the show and reduces the back. The suspension settings were chosen to make riding more comfortable and more accessible. In the upper-triple clamp, the steering offset is increased by 6mm. It reduces trail, making it easier to steer and drive the car easier to handle. It also makes the steering easier to turn. The frame parts follow the ideal pipe line so that the frame lines are as straight as they can be. When bends were needed, their angles were as small as possible, which led to a design that spreads stress very well. There are five points where the engine is rigidly mounted. It makes the car lighter. The low seat height and easy reach to the ground are made possible by using a twin-tube rear frame section. It reduces the vibration that is sent through the seat. 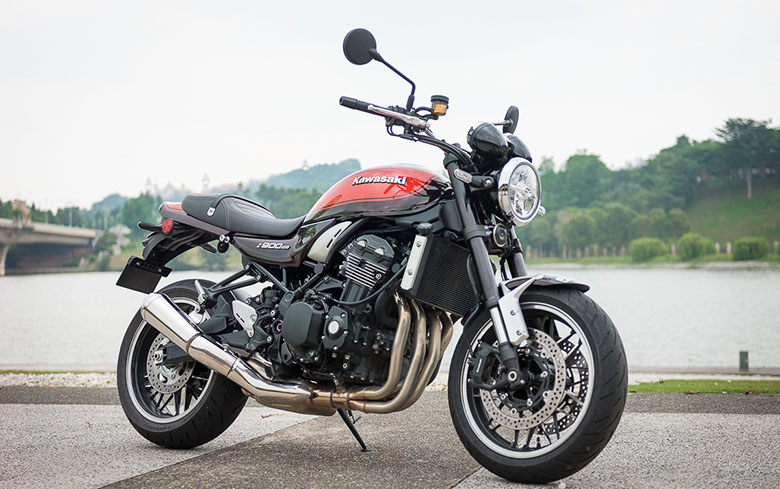 The 41mm inverted front fork helps make the ride more comfortable and fun. The 10-way compression and 12-way rebound damping settings can be changed to match the rider’s preferences and riding style.

With Kawasaki’s new suspension technology, this bike has a higher sporty riding ability and fits in well with the front fork’s level of ride comfort and sporty performance. To keep the swingarm’s mass in one place and keep the lay-down shock absorber from getting hot, the linkage goes on top of the swingarm. The shock can be adjusted for preload and rebound damping. The lightweight aluminum swingarm helps make the bike easy to handle.

Dual 300mm front discs are held in place by monobloc calipers with two opposing pistons. These calipers provide a firm feel from the first touch, which helps the brakes work well. Alumite and the Kawasaki logo are laser-etched into the machined Monobloc calipers to make them look more high-end and sportier. The radial-pump master cylinder also helps the calipers give you great control and feel. Sintered brake pads help make the car feel great.

Cast wheels have flat spokes that look like wire-spoked wheels. The wheels were made with Kawasaki’s advanced analysis technology. They’re both light and stylish, which helps with both handling and the retro Z1 design. On some colors, the spokes and the edge of the rim are machined, which adds to the bike’s high-quality look. The Dunlop GPR-300 tires help give the car a retro look. 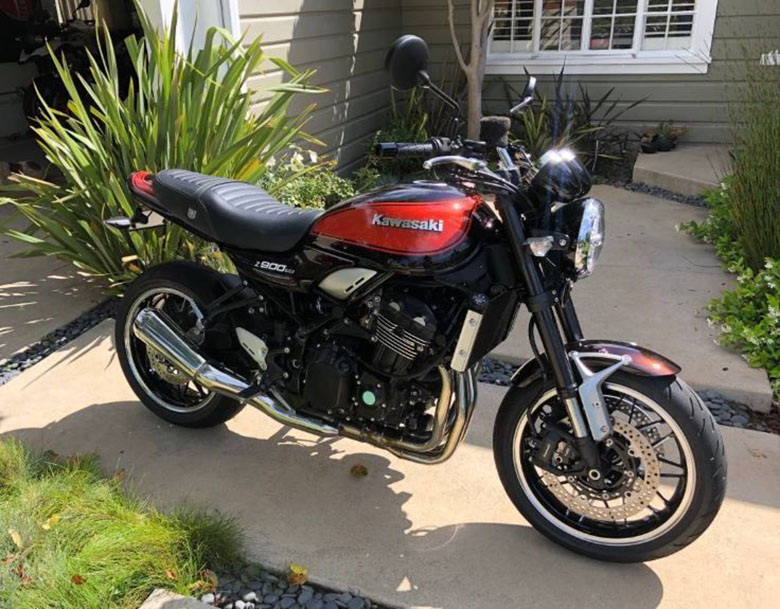 The upper-triple clamp is 40mm higher than on the Z900, which means the handlebars are higher, and the rider is more upright than on the Z900. The wide, flat handlebar adds to the retro look while giving the rider a wide grip to help them control the bike. Compared to the Z900, the handle grips are 30mm wider, 65mm higher, and 35mm closer to the rider. It helps the rider to be more upright. A wide 35-degree steering angle makes it easier to move around at low speeds while the handlebar has rubber-mounted bar-ends to reduce vibrations. To be more comfortable, the clutch and the brake levers can be moved in five different ways. It’s easy for riders to grip the bike with their knees because the fuel tank is small at the back. For various riders to put both feet on the ground when the bike is stopped, the seat is a shallow and slim overall design.