The announcement that the introduction of Euro5 pollution regulations has killed off all V4s in Honda’s road bike lineup – ensuring there are no V4s in Honda’s road range for the first time since 1982 – pardon us if we get teary-eyed in remembrance of the brilliant, much-loved breed.

After all, almost everybody has glowing stuff to say about the legendary VFR750F from 1986 to 1997, regardless of which model you’re speaking about; the latest, jewel-like MotoGP replica, the RC213V-S, was undoubtedly the ultimate racer replica; and many still consider the beautiful RC30 No. 1 to be the top racer replica.

But the V4 wasn’t the only standout in Honda’s sporting lineup; there were lots of others, as well as the occasional “lemon.” So, here are our top ten Honda V4 roadster picks – ever – and here’s hoping for a fantastic new Honda V4 road bike soon! 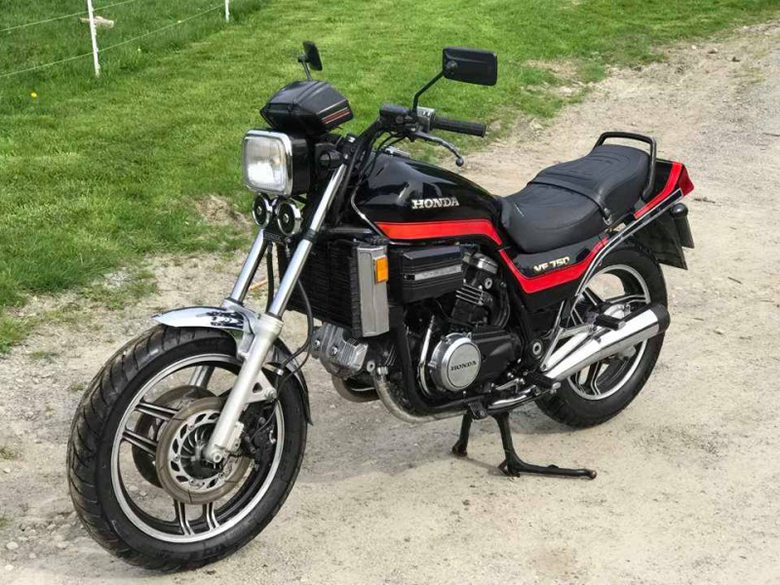 While Honda’s V4 ‘project’ officially began with the unfortunate NR500 GP racer in 1978, its V4 road bike tale began in 1982/3 with the similarly troubled VF750S and F – so agitated, in reality, that it’s a wonder Honda stuck with V4s at all.

The S, a semi-cruiser roadster known as the Sabre in the United States, was the first to arrive, followed by the F (known as the Interceptor) a year later. Both were built on the same 90o V4 chassis (although the S had shaft drive, the F chain). Both were technological marvels, at least on paper. The VFs were liquid-cooled, 16v, high-performance vees, as opposed to the air-cooled, 2v straight fours that were standard at the time. 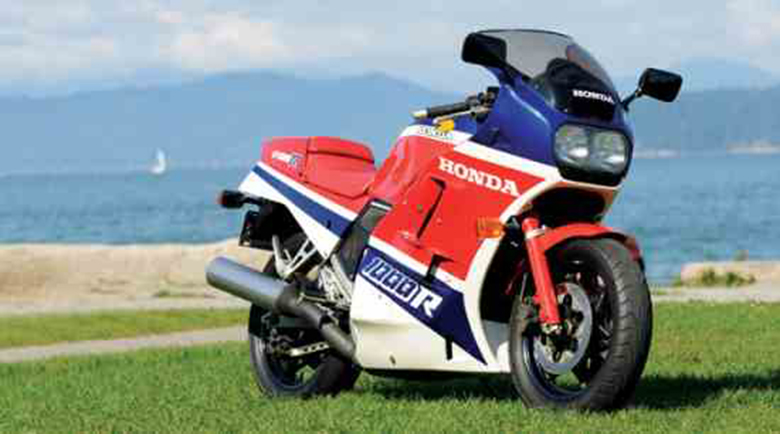 As a sequel to the CB1100R, the R was built to be the ultimate, highlighting all of Honda’s new technologies. The R had a sophisticated gear-driven arrangement, unlike the other 1000s (and 750s), which had chain-driven cams. 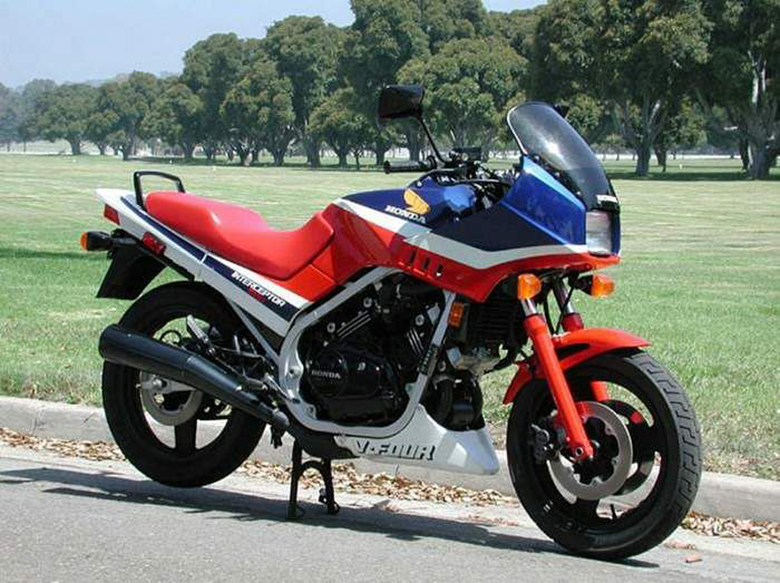 The first 16v 400 was a blast of fresh air: lightweight, with innovative inboard disc brakes and bikini fairings, and capable of delivering an incredible 55bhp at a heady 12,500rpm redline, almost enough to top Yamaha’s 59bhp two-stroke RD350YPVS. It might have been if it hadn’t been £200 more costly. The 1984 VF500F, and particularly the Europe-only, fully faired F2, was even better. 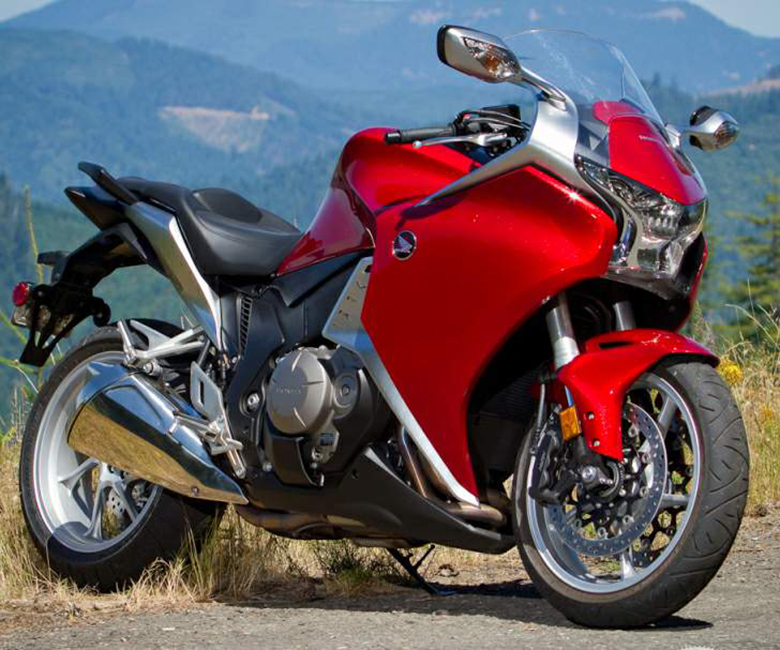 Between 1987 and the mid-1990s, Honda’s 750/800 VFR V4s were hugely popular, so a more significant, better replacement was long overdue. After numerous teases and setbacks, it eventually arrived in 2009. Despite being competent and outstanding in many respects, it was essentially a failure, resulting in its removal from the market after just eight years.

The all-new 1237cc V4 engine was charming, delivering 170bhp with plenty of midrange flexibility and character, as well as shaft drive and, starting in 2010, Honda’s clever semi-automatic “DCT” gearbox.

About anything else about it was questionable: it was too heavy; the idea of a “sports-tourer” was obsolete at the time; its styling was disliked; its fuel tank was too small; and its spec, with an old school dash and no electronic rider aids, was outclassed by cheaper bikes like Kawasaki’s Z1000SX. 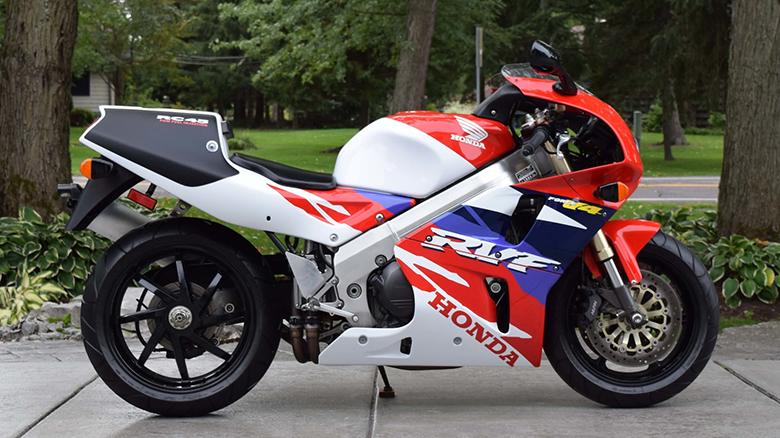 Another high-tech Honda V4 that, while brilliant, fell short of expectations. The WorldSBK homologation special RVF debuted in 1994 as the long-awaited and eagerly awaited sequel to Honda’s first all-conquering V4 superbike, the RC30.

It was all-new and co-developed by Honda’s racing division, HRC, and Honda R&D. It was a 90o V4 with gear-driven cams in an aluminum twin-spar frame with a single-sided swingarm, similar to the RC30. A shorter stroke, a more compact build, and fuel injection were among the differences.

Despite its track performance, especially in the TT and world endurance, it was deemed too big and bulky and only won one WSB championship. Although sublimely polished on the lane, its high first gear was noisy, its road-legal 120bhp was nothing special (decent track horsepower required an ECU tweak and a separate exhaust), and at about £18,000, it was twice the price of a Fireblade and half the price of a Ducati 916. 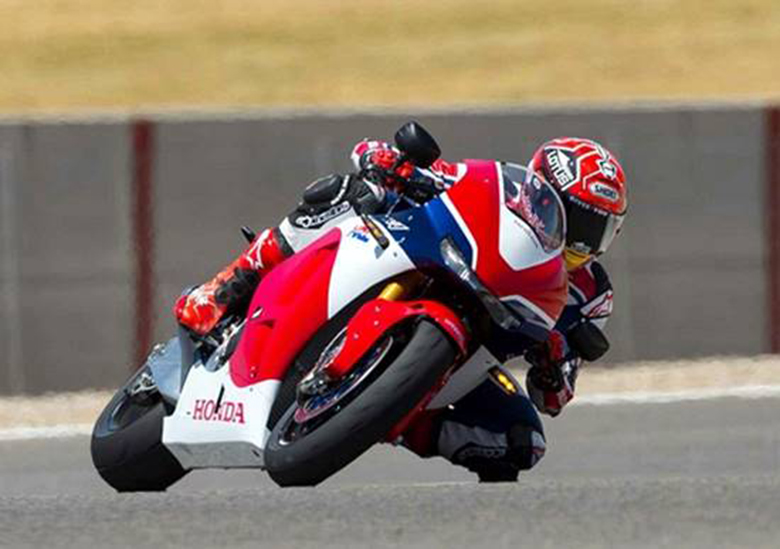 If the RC45 was never quite the “ultimate V4” Honda promised, the 2015 RC213V-S would undoubtedly take its place, nostalgia for the RC30 pushed to one side. Conceived as a road-going clone of the then-current RC213V MotoGP rig, it’s as similar to the bike as possible while being realistic and affordable.

A total of 250 were hand-built by small teams of hand-picked engineers. While road regulations limited performance to 159bhp, the bike’s chassis featured the best of all, including Ohlins TTX25 gas forks, forged magnesium wheels, and a slimline full-color TFT dash. At the same time, the optional Sports Kit, which includes a revised ECU and exhaust that together unleash 215bhp, brings it as close to the complete works V4 MotoGP experience as mere mortals can get. 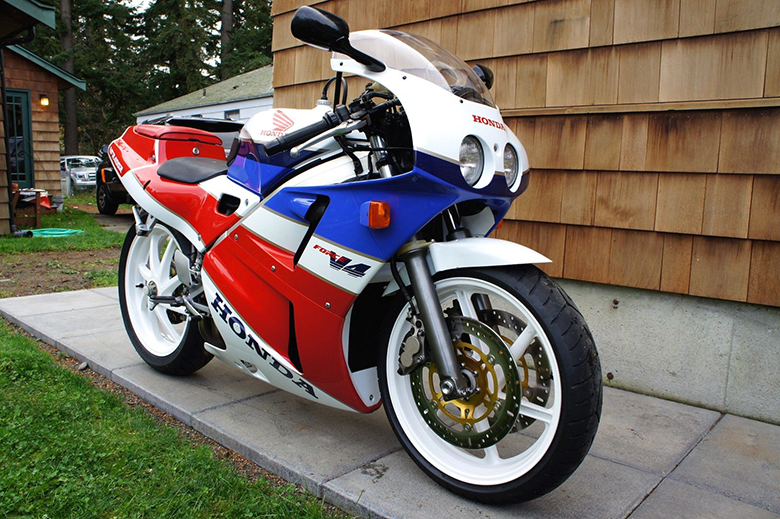 Why is a teeny-tiny 400 so prominent on our V4 list? Simply put, the NC30 and RVF400R, the jewel-like little brothers to the RC30 and RVF750R, were better bikes in many respects because they were so sweet, so much fun, and so much more inexpensive and available to the average Joe than their bigger brothers. After all, few people have rode an RC30 on the highway, let alone to the limit. Thousands, on the other hand, have thrashed – and cherished – the NC30.

Both were designed in the same factory as their 750 siblings but had a lower spec, less exotic materials, and weren’t hand-built. Both were also the product of a licensing law in Japan at the time that favored 400cc motorcycles.

With superbike spec for near-commuter income, they and others from Yamaha, Suzuki, and Kawasaki became hugely successful, with something of a ‘grey import 400′ cult emerging into the mid-1990s. 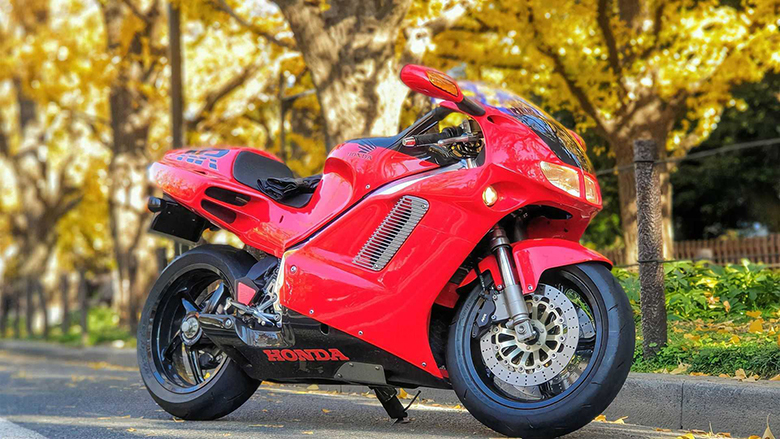 The NR750 was, in many respects, not just the ultimate Honda V4 but also the most exotic motorcycle ever. Honda first proposed the NR500 racer in 1978: a four-stroke V4 GP bike with oval pistons, twin con rods, and eight valves per cylinder to provide the strength of a V8 and thereby compensate for rival V4 two-strokes’ twin power pulse advantage. 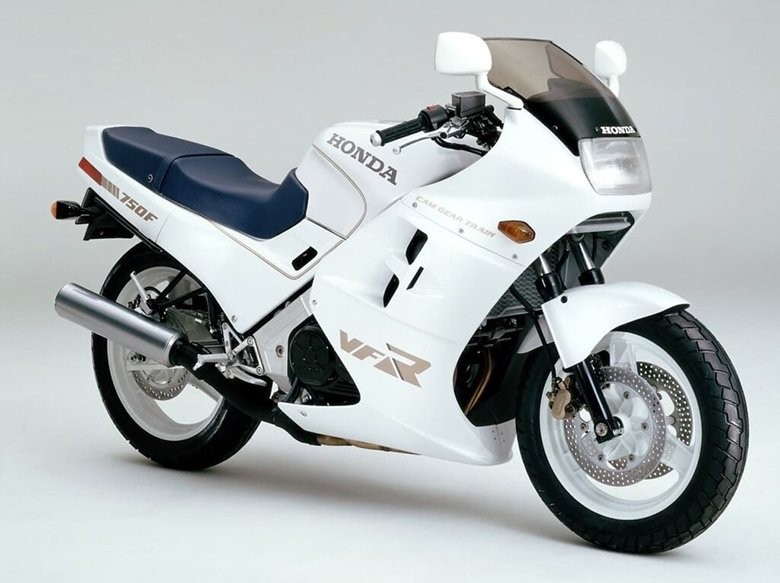 If the NR750 makes the ‘business end of this list with just 200 examples produced, the VFR750, which reigned supreme as the ultimate sports-tourer between 1987 and 1997 in 750 shapes, then continued to impress as an 800 up until 2013, with tens of thousands built, would certainly rate even higher. 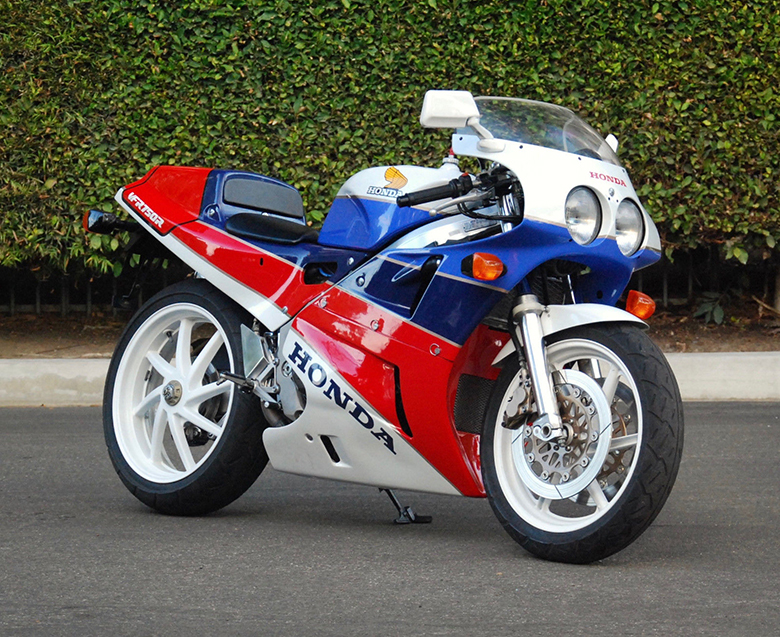 Although we were tempted to put the sports-tourer VFR750F at the top of this tree, particularly in its later 1994-1997 guise, there was no denying the obvious truth: the ‘RC30′ is still the best Honda V4 ever made.

It was perfectly timed to market Honda’s latest VFR V4s, designed to take advantage of the new World Superbike and world endurance racing regulations (based on 750cc production machines). It was built with no cost spared by HRC; the RC30 can rightly claim to be the best Honda V4 of all time.

The point is difficult to refute when you consider what it set out to do. It won right out of the crate as a particular homologation driver, not only in WSB (where it was the first champion in 1988) but also in endurance, F1, and the TT.

As the Euro5 standard has got strict and the V4 bike is not in the manufacturing line. We all are feeling low in remembering such a great lineup, especially from Honda. We hope you like our article and will come back for more updates about motorcycles.