The new 2019 Moto Guzzi V7 III Carbon Dark Heritage Motorcycle is another impressive motorcycle by Moto Guzzi. The V7 III Carbon Dark Heritage is available in limited edition, and it represents originality and great taste. The bike is an example of an authentic combining of V7 style with prestigious and modern quality of numerous carbon fiber components including sleek fenders and side fairings. The V7 III Carbon comes with matt black color with impressive contrast of red detailing. Every part boosts the overall performance of the motorcycle leaving others behind in the same category.

The V7 III Carbon comes with full customization options and it is interpreted initially and in good taste. It offers the best combination of authentic V7 style with prestigious and modern carbon fiber components including sleek fenders and side fairing. Furthermore, the series number of the model is identified by the plate positioned on the handlebar risers. There are about 1921 units available with the number that recalls the year that Moto Guzzi was established. The overall review of the 2019 Moto Guzzi V7 III Carbon Dark Heritage Motorcycle with its price and specifications is written below. 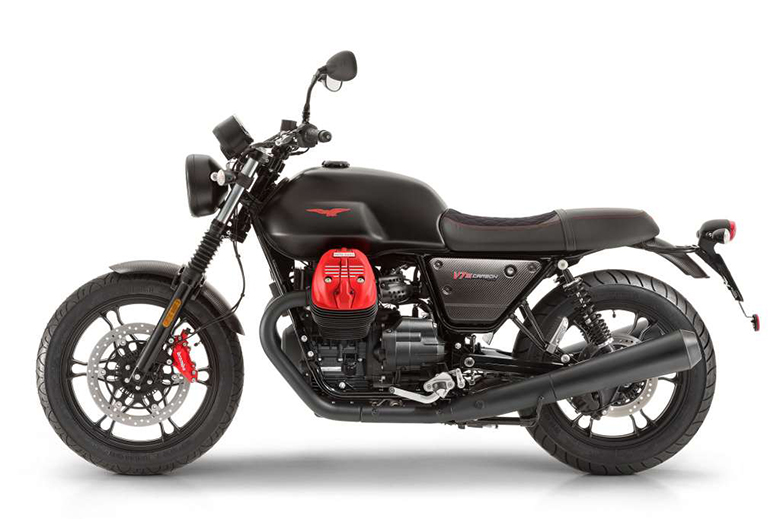 The new Moto Guzzi V7 III Carbon Dark is the latest generation optimized to ensure an effortless riding experience. The primary objective led the evolution to the style with standard equipment and performance on the road. The motorcycle keeps the stylish personality of the model intact, characterized by the design that dialogues through attractive shapes inspired by Moto Guzzi heritage and motorcycle requirements. The first impression behind the bike is to ensure fabulous presence and powerful motorcycle including sensation due primarily to the new dual-pipe exhaust manifold and cylinder heads, both in large size. On the other hand, the new metal fuel tank is kept identical, and it is available with a 21-liter capacity and style.

Furthermore, the elements of the popular style concern the injector covers and new side fairing with their sleek shape. Each of the V7 III versions features a dedicated saddle with brand new graphics and covering. The motorcycle features single but circular display instrumentation in keeping with its image of essential motorcycles. The speedometer comes with an analog dial while all the other information is containing in a digital box. Furthermore, the rider interacts with the instrumentation using the button on the right-hand electrical block. An all-new extensive catalog of accessories includes the MG-MP. This Moto Guzzi multimedia platform connects a smartphone to the vehicle to offers a significant quantity of helpful information for the journey. 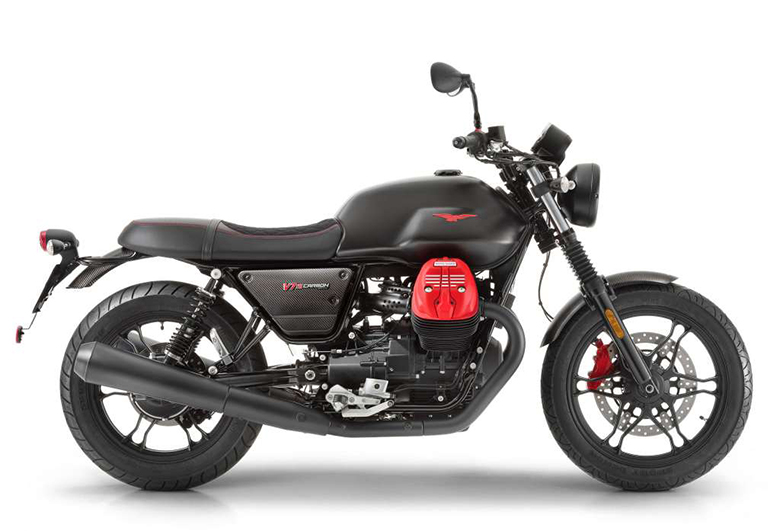 Moto Guzzi is well-known for its super-fine chassis architecture and its delightful ride of the V7 has its origins in the distant past. In 1970, the motorcycle won the selection to join the LAPD (Los Angeles Police Department) team. The steel frame features a dismountable double cradle layout and the same weight distribution typical V7 tradition i.e. (46% front, 54% rear). The third generation introduced an entirely revamped and reinforced front part with different steering geometry to ensure perfect handling, extra stability and dynamic cornering. Greater attention was placed on the meticulous care and finishing of details like paintwork and welding.

The rear suspension system comes with pair of Kayaba shock absorbers, adjustable in spring preload. Thanks to the superior quality and inclination on the fixing point to the frame, they provide a progressive and controlled response under all situations. The passenger will also admire the comfortable seat position, thanks to the low and forward positioning of the footpegs. The triangulation of saddle, footpegs-handlebar is ideally spaced for the rider of all heights, thanks to the new lower saddle and the correct positioning of the aluminum footpegs.

There is many significant twin-cylinder engines in the world but there is only one transversal V engine and it is by Moto Guzzi. It was born in 1967 out of a creative intuition by Mr. Giulio Cesare Carcano and characterized by the configuration of the cylinder so particular that it made it an integral part of the motorcycle’s design. In the miniature block version, it has now reached its third evolution and it has been entirely revamped comparing with the V7 II engine to achieve the maximum riding pleasure and fun on the road as well as ensuring higher performance and reliability. 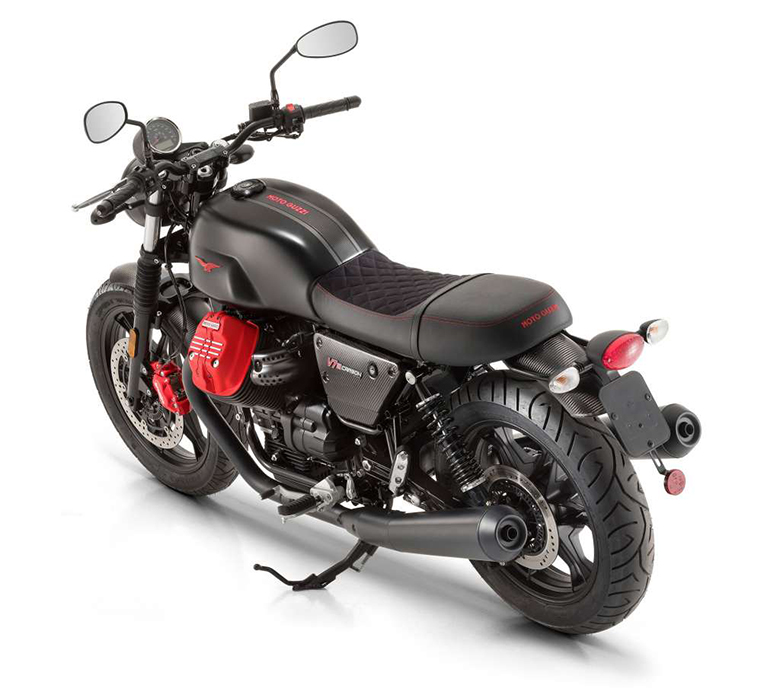 An aluminum crankcase, stiffened in the key points that use a crankshaft with inertial calculated to offer a positive response and an adequate engine brake. The new lubrication system in the crankcase has been designed to dissipate the heat in the best possible way. It decreases power absorption in favor of both performance and a reduction in fuel consumption. A ventilation system that decreases power loss due to an internal pumping of the crankcase chamber and a reduced oil pump capacity can absorb less power. The oil pump intake duck is brand new and it is related by-pass valve and piston cooling oil jets have been introduced with a flow control and management valve. An alternator cover comes with the blow-by gas output.

The interventions introduced a year ago are also concerned with the upper part of the engine. It comes with new aluminum heads, pistons and cylinders as compare to V7 II, although the bore and the stroke values are the same as in the 2018 Moto Guzzi V4 III Carbon Dark. These are the specific choice that confirms the V7 III as the Moto Guzzi entry-level bike. The timing has by the pushrod and rockers system with valves per cylinder but they are arranged in an inclined position. An all-new fuel system is entrusted to the single-body Marelli electronic injection system, managed by an electronic control unit. The exhaust system is finished with dual pipe manifolds that help in improving thermal insulation. Thanks to an auxiliary air system intake in the heads, combined with a trivalent catalytic converter, the double lambda probe, and the new engine design, the Moto Guzzi twin 750 also complies with the Euro 4 standards.

The engine can deliver maximum power of 52 HP at 6,200 rpm, whereas the top torque measures 60 Nm at 4,900 rpm. Thanks to the genuinely flat torque curve that ensures ease of using a combined and typical character with the engine’s quick response. The reduced-power version is also available for an A2 class driver’s license and ideal for new Guzzi riders who count on the reduced total weight and size and the overall easy ride of all the V7 III versions. There is another innovative aspect of the Moto Guzzi engine that comes with a 170 mm dry single disc clutch that improves sturdiness and reliability over time. It also decreases the load on the lever at the handlebar that helps in module ability and riding comfort. The new six-speed gearbox introduced on the V7 II, accurate and smooth, is unchanged and now benefits from different first and sixth gear ratios but is slightly lengthened. 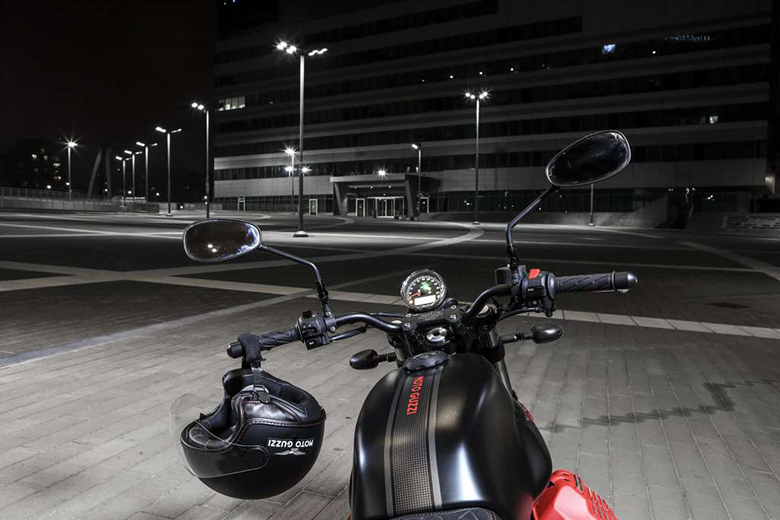 When it comes to safety concerns that Moto Guzzi has always been on the top of the game to ensure maximum safety throughout the ride, the VIII has an ABS (Antilock Braking System) and fully Adjustable MGCT (Moto Guzzi Traction Control) system that can also be disabled. The former is the two-channel Continental system that prevents the wheels from locking up, while the latter is a system that avoids rear wheel spin in acceleration. The MGCT system is adjustable in two sensitivity levels. The first one is more conservative and ideal for poor grip due to wet or slippery asphalt while the other one is designed to cater to the thrill of riding in safety. The other peculiarity of the MGCT system is the possibility of its recalibrating ability of the rear tire edge compensating for any wear or the use of tire with a different profile than the original one so that the traction control system will always be accurate.

The Moto Guzzi multimedia platform is available in the 2019 Moto Guzzi V7 III Carbon Dark Heritage Motorcycle as an option. It is an innovative multimedia system that allows the rider to connect the motorcycle with the smartphone. Thanks to the dedicated application and downloadable free from App Store and Google Play, the rider’s smartphone becomes an onboard multifunctional computer and a unique link between the vehicle and the internet. 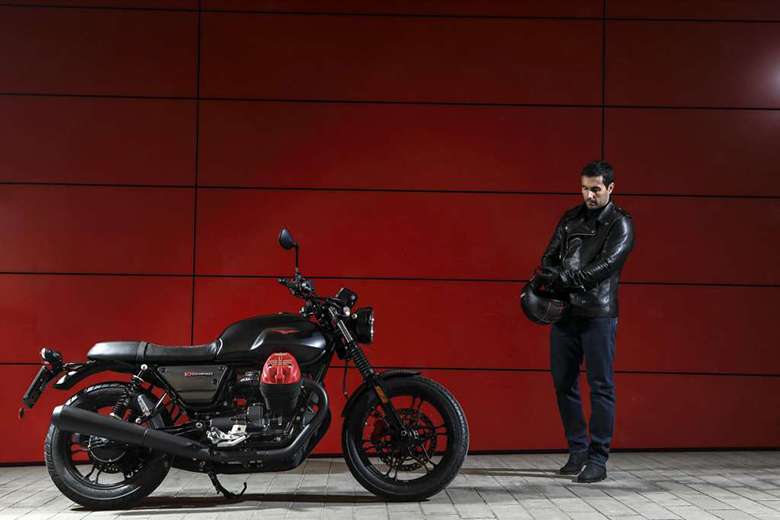 Moreover, the Bluetooth connection helps the rider to view five different parameters of his choice simultaneously. The “Eco Ride” features help limit fuel consumption and maintain eco-compatible riding conduct offering a brief valuation of the results obtained during the trip. The rider can also record the trip information and review it on his computer or directly on his smartphone, analyzing the route taken and viewing the vehicle operating parameters point by point. The system allows the rider to quickly locate his truck when he parks it in a strange place. The MG-MP includes the ‘Grip Warning’ function that replicates the indicators on traction control operation and it alerts him in the event of excessive use of available traction.