Modern, new design driving, left revisited cycle and equipment, Piaggio again gives arguments with its scooter of line entry, Piaggio Fly 125 Cm3. And if that is not enough, the Italian manufacturer has a last asset: enticing tariff a near to the 2,000 €. What is worth compact Italian at low cost? The answer is here! 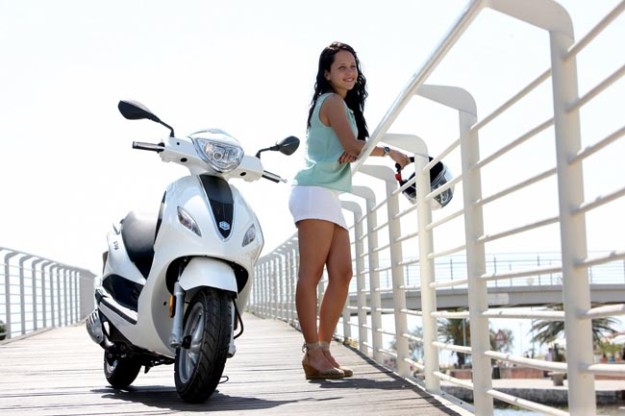 The scooters 125 Cm3 of European or Japanese mark sold with the neighborhoods as of 2,000 € do not run about the streets. On this market segment cornered by models originating in the South-East Asia, one finds all the same two scooters Peugeot, compact called Vivacity 125 (1 799 €) and the large-wheels Tweet 125 (1 999€), but also a scooter Piaggio, Fly 125 (2 090 €).
The new Italian utility which arrives in concession at this end of the year was entirely revisited, that it is on the level of its manufacturing, its structure or its motorization. But do not mistake! So as the Peugeot scooters new Piaggio Fly 125 ie 3V proudly exposes its membership to a known European manufacturer; it is indeed on the other side of the planet which it is built. Not in China, like are the Peugeot scooters of line entry and was to it also old Piaggio Fly, but in the Vietnam.
Thus one manages to lower the manufacturing costs, and to propose a gravitational tariff! Is quality with go? Is Piaggio Fly 125 ie 3V 2013 worth the cost? After one week to be commutated on the Paris region with the handlebar of this scooter, bikescatalog delivers its impressions to you. 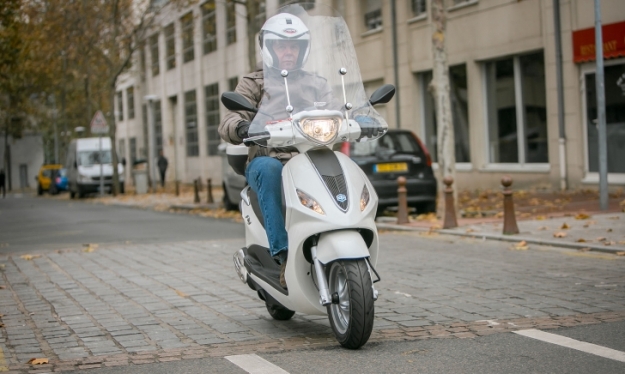 Little expensive, but not “cheap”!

When we took possession of our model of test, a first impression quickly emerged. New Piaggio Fly 125 i.e. 3V 2013 is not very expensive, certainly, but it does not make “cheap”. We are not particularly fan of his new design – noticeably, the old one hardly excited us more – nevertheless force is to recognize its beautiful manufacturing.
Its plastics are adjusted with the millimeter, their thickness corresponds to the standard of the European or Japanese manufacturing (references of the market), the colors are of good invoice and certain details of completion prove to be pleasant, with the image of the integration of the side protection measures, or of the chrome aspect of material ringing the fire and the panel instrument.
Better still; one feels a deliberation around the model in order to reinforce perceived quality, as it can attest some of his equipment, top puts and optional windshields of our machine of loan put except for. Rims, retractable footrest momentary, cap of opening of trap door with petrol, vast limps with glove, retractable hook placed at the end of saddle, the equipment is neat and singular for a scooter of this category. 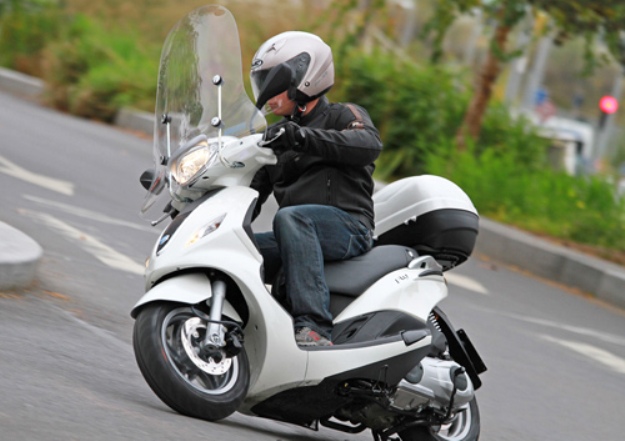 Still more accessible than old model 125 or 100 Cm3, new Piaggio Fly 125ie 3V 2013 has a saddle placed at only 760 mm (against 785 mm on the preceding model). As a result even the small gauges will flat pose their foot on the ground without difficulty.
Good width of appreciable saddle, fondant, the pilot is installed comfortably and ideally directed towards a handlebar from which the orders fall instinctively under the hands. The completely flatten floor is more practical to transport a bag. The surface which it offers is vast and to profit from, even more at ease, Piaggio also arranged the low parts of the apron. One “cruise” not yet with the handlebar of Piaggio Fly 125ie 2013, but one can however extend the legs slightly.
Contact, engine, that turn… that made astonishment more noise than on new Vespa LX and S 125 IE 3V, first models to use for the first time, the new one-cylinder house with 3 valves. That brought the speed of answer to the accelerator being more amusing, like the linearity of this block injected, an argument pleading in their favor is hardened with the practice of the two-wheeled vehicle.
With a quasi-instantaneous setting in motion on this not very heavy scooter (weighed we it to 140.6 kg all full facts), the engine of 12 horses offers a particularly appreciable approval downtown. 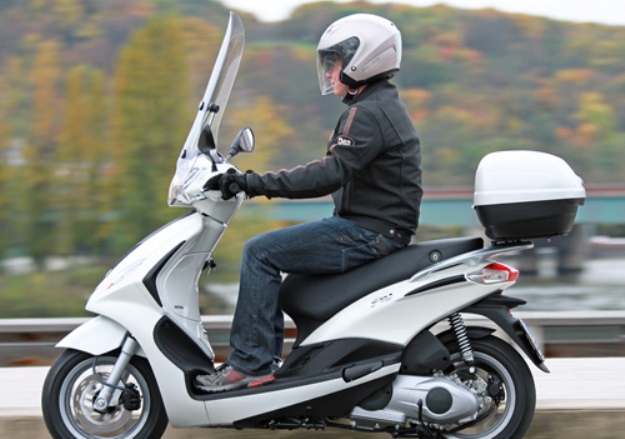 Town tool par excellence, Piaggio Fly 125 i.e. 3V is of a great help when circulation is made denser. It directs well, is handled with ease and does not have any evil to threat everywhere, in view of its compact dimensions, its balance and its centre of gravity is ideally located.
Contrary to the old grinding, the news is equipped with discs of brake like in the past, but the services offered in this field are rather comparable. Progressive, the previous one does not block in addition to measurement, but this new bike offers corrosive acceptable, although it is necessary all the same to press extremely on the levers.
From the center of the city to the fast tracks it has only one step, which we take hardly without hesitation, in the presence of the very least protective windshield (129 € in option). Admittedly, the footing of the machine is reduced enough, but camped on its wheels are of 12 inches; Piaggio Fly offers a serious handling. Its mechanics distils good recoveries and its lengthening-piece is honorable, for a compact vehicle of this category it gets along “first price”.
With a maximum speed measured about 97 km/h (almost 110 km/h with the meter), Fly is not the machine dreamed to face the motorway axes (one suspected it), because of its weak requirements while carburizing (measured to 3.4 L 100 km) like, But ensures us the manufacturer, his low level of harmful emissions, it has other reasons for satisfaction.
Beside comfort, this new definition of Fly did not completely convince us. So at the beginning of our description we evoke the fondant of base, force is now to recognize the drought of its back suspension, however regulated on the supposed notch to offer the most of flexibility. The fork also seemed to us as a lack in hydraulics. 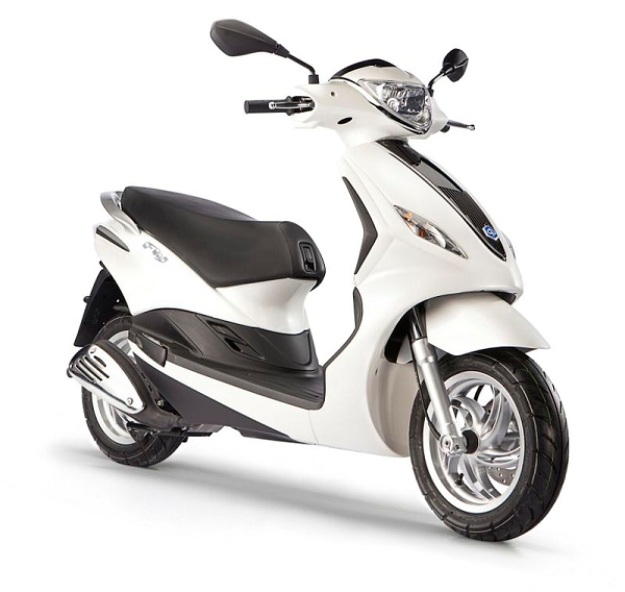 Assessment: More qualities than of defects

2090 €, which says better? Not high society by way of side of the European manufacturers like previously evoked. As for the offer of the Taiwanese marks, which propose prices even low, this one is strong interesting, but it is necessary to acknowledge that these models are less well equipped.
Also, their customer service does not inspire same confidence near the users, which either is debatable, since these Taiwanese marks proved reliability and availability of the parts to be replaced.
In addition to its tariff, Piaggio Fly 125 ie 3V has of dynamic qualities proven, a beautiful manufacturing and complete equipment. Its “modern” mechanics offers a good approval and icing on the cake, Piaggio announces intervals of revision more spaced than before. Briefs, its assets seductions are numerous!