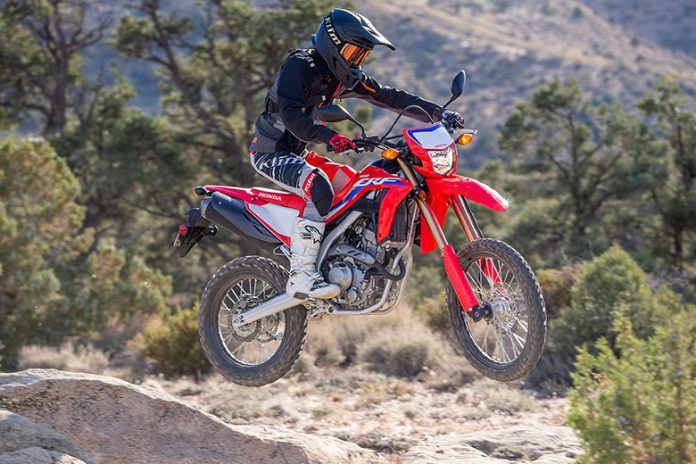 The CRF300L has been reinvented with a lighter chassis, thinner bodywork, and increased engine power and torque. However, although the specifications have increased, the amazing dual-purpose recipe has remained the same. Slim dimensions, quick throttle response, nimble steering, and soft suspension are all traits that make it great off-road. With fun and fulfilling all-around performance, the CRF300L brings life to any daily commute. And when the weekend arrives, this is a motorbike built for adventure. 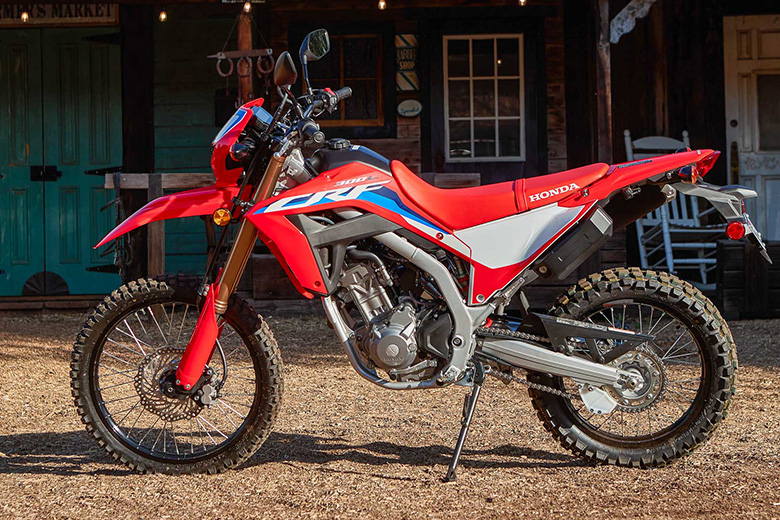 First, let’s do the numbers

Thanks to its redesigned frame and tapered aluminum swingarm, the CRF300L is 4kg lighter, which you’ll feel the minute you change direction, whether on or off the road. The bigger single-cylinder engine now has an Assist/Slipper Clutch and delivers an additional 1.9kW of power and 4Nm of torque, which you’ll notice when you open the throttle. The riding posture has been engineered for complete control, with a small fuel tank and a curved seat for comfort and simple ground reach. The sophisticated finishing touches include a dash-mounted Gear Position indication and a new aggressive headlamp design.

Ready For Work and Play

The CRF300L is descended from the legendary CRF450R and CRF450RX race motorcycles.

As a result, it gets off to a tremendous start. We’ve increased every area of its dual-sport performance due to HRC and its racing program. The ground clearance has been increased by 30mm, making it considerably simpler to bump off curbs (or over logs).

The increased seat height to 880mm improves natural handling, and the compact fuel tank allows you to go ahead quickly. The CRF300L is built for handling tough metropolitan streets or conquering new terrain – or both in one day. 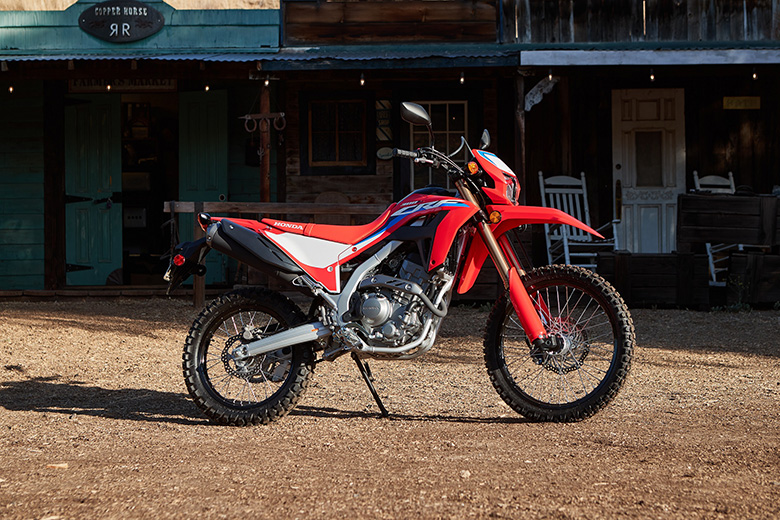 Honda’s DNA has always been infused with the spirit of what constitutes a tremendous dual-purpose motorbike. The XL250S was introduced in the late 1970s as a bike that combined actual on-road usability with exceptional off-road capability. The whole XL series that followed demonstrated that combining an affordable and easy-to-use single-cylinder four-stroke engine with a capable chassis produced a good, adaptable motorbike, as riders all over the globe discovered a lot of fun.

Extensive talks took occurred inside Honda R&D over a decade ago concerning the development of a brand-new dual-purpose machine. When the bike was originally being developed, the company’s extensive history – in off-road racing and trail-ready technology – served as a valuable reference point.

The CRF250L, released in Europe in 2012, was precisely that motorbike.

Honda’s engineers perfected the recipe. The CRF250L has proven to be a successful primary platform, generating a RALLY variant and enjoying consistent sales success globally.

However, time moves on, and the new CRF300L takes center stage in 2021, lighter, more powerful, and with a slew of detail enhancements. It’s every bit the all-around, dual-purpose machine that the CRF250L was. Just a little bit more.

Gear ratios 1-5 are shorter to match the engine’s more incredible punch and improve pick-up and acceleration, while the 6th gear is higher for more comfortable highway cruising. An assist/slipper clutch decreases lever load by 20% and minimizes rear wheel ‘jump’ on quick downshifts, which is fantastic for handling on and off the road. On the highway, peak speeds range from 129 to 132 kilometers per hour. 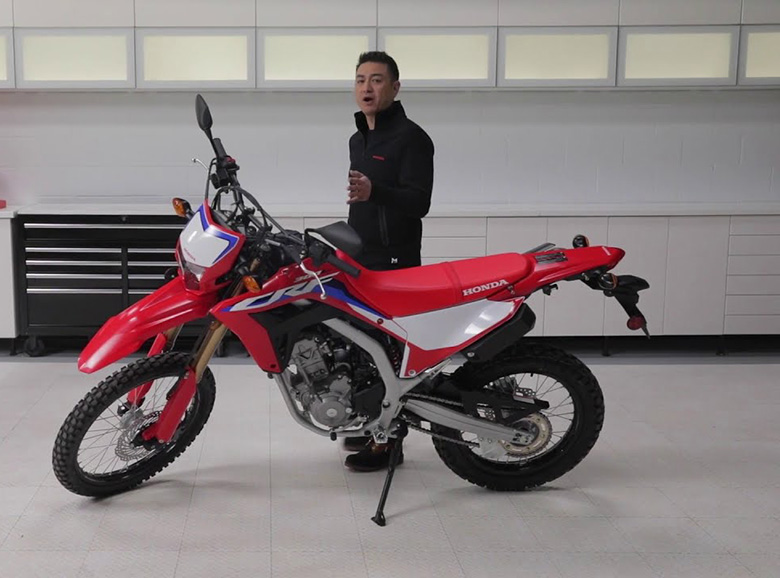 The engine has an offset cylinder to reduce internal frictional losses, as well as a unique surface material and molybdenum coating on the piston. An internal relief device in the oil pump avoids aeration of alleviated oil. A half-split, press-fit metal bearing is used in the crank journal, while a cast-iron bush is used in the crank bearing. Vibration is further reduced by using the main balancing shaft.

A 12.7kW heat-release radiator is located on the left side of the bike and is shielded by a polypropylene grill baffled to promote airflow. In heavy traffic or challenging off-road circumstances, a thin guide-ring cooling fan is employed to maintain consistent temperatures at moderate speeds. The CRF300L engine is fully EURO-5 compliant

The chassis of the CRF300L has been reduced by 4kg, resulting in a wet weight of 142kg. The brand-new steel semi-double cradle structure adds 2.15kg to the weight decrease. In addition, its flexibility balance has been tweaked with 25% reduced lateral stiffness to increase handling sensation and connection to front/rear traction. It was accomplished by reducing the width of the main down tube (-30mm) and slighter, 25.4mm diameter lower down tubes (from 28.6mm), as well as a 20mm reduction in the breadth of the central bracing line. 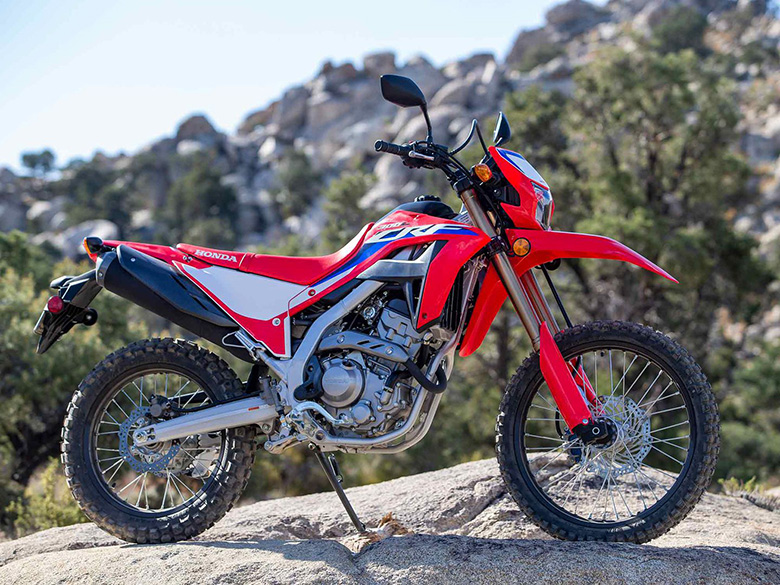 In addition to being 550 grams lighter, the one-piece cast aluminum swingarm has a 23 percent decrease in lateral stiffness. It’s also 15mm thinner directly below the pivot point, and a smooth, cross-sectional shape achieves consistent deflection. The chain adjustment collar is made of extruded aluminum. The old design’s steel bottom yoke has been replaced with aluminum, saving 730g in a location high relative to the center of gravity enabling quicker steering response.

For precise control across various terrain and speeds, the 43mm Showa inverted fork gets 10mm of the stroke to 260mm, with spring weight and damping settings changed. The Showa shock absorber is a single tube design, and the Pro-Link rear suspension now has a 260mm axle stroke, up from 240mm. Thanks to modifications to the lower frame, engine crankcases, and oil drain cap, ground clearance has risen from 255 to 285mm, and the structure and engine sit 20mm higher. With a 10mm larger wheelbase of 1455mm, the rake and trail are now set at 27.5°/109mm (up from 27.6°/113mm). The turning radius is 2.3 meters.

The front brake is a single 256mm disc with a two-piston caliper, while the rear brake is a 220mm disc with a single-piston caliper; the rear master cylinder, like the CRF competition bikes, is now a lightweight, integrated design. The discs have a wave pattern that is similar to the CRF250R/CRF450R and has excellent self-cleaning characteristics in lousy weather. ABS is standard in two channels. Lightweight aluminum rims decrease unsprung mass even more, and the Alumite surface has been polished to a glossy sheen for 2021. Enduro-style tires with a block pattern (front 80/100-21 51P, rear 120/80-18 62P) offer traction in various riding conditions. The 21-inch front wheel and 18-inch rear wheel boost stability on rugged terrain and enable extra off-road specialized tires to be installed if needed. A machined rear sprocket, M8 bolts (rather than M10), and a hollow rear axle save 240 and 160 grams, respectively.

The CRF300L sports a short set of new bodywork and graphics, drawing even more influence from the racing CRFs. To help forward mobility, the 7.8L gasoline tank is 190g lighter and smaller than previously and is complemented by a narrower front seat portion. The rear number plate bracket has been lowered by 300 grams, and the aggressively curved front mudguard has also been made lighter. The riding posture has been discreetly adjusted to encourage simple, light control: the handlebars have been pushed back somewhat, while the footrests have been lowered and shifted back to make gear changes in heavy off-road boots easier. 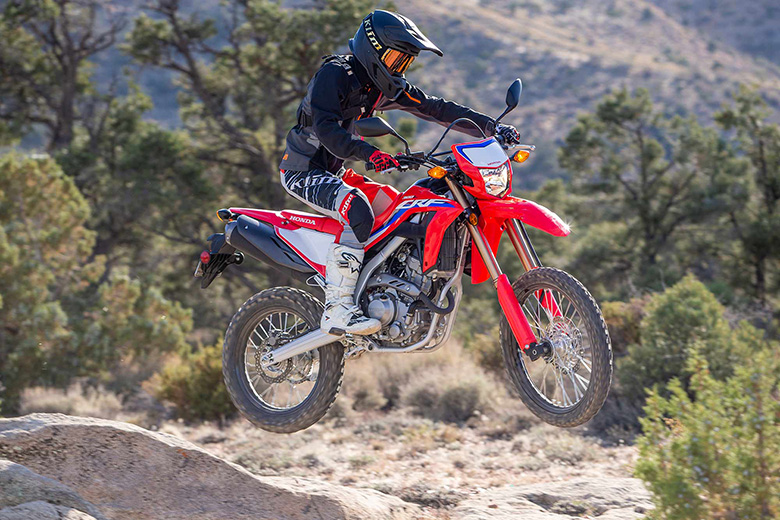 For a naturally upright ‘rider triangle,’ the seat height has been raised from 5mm to 880mm. The (new) foldable footplate on the side stand has also been changed, with a 10% bigger surface. Large black numerals on a bright white display for close reading are featured on a new, 70g lighter LCD. At 23mm, the speedo numerals are also 6mm bigger. The gear position indicator, fuel economy and consumption, average speed, stopwatch, and rev-counter are all included in the data. 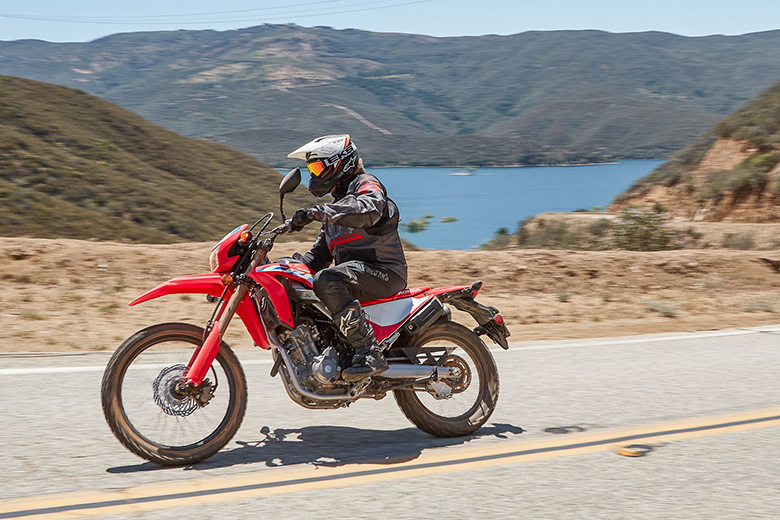 The CRF300L is lighter, has thinner bodywork, and more power and torque. The fantastic dual-purpose formula hasn’t changed despite the higher requirements. Slim size, rapid throttle response, agile steering, and soft suspension make it off-road. The CRF300L makes commuting enjoyable. It is a weekend-ready motorcycle.