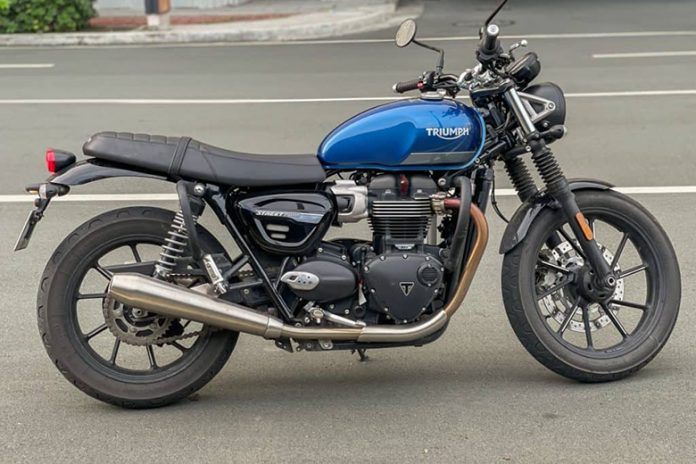 Before MY2021, Triumph improved all of its Bonneville-powered bikes, paying particular attention to the Street Twin model. The 900 cc twin is cleaner this year, meeting the requirements for the Euro-5 emissions classification, and the seat was given a thicker layer of foam padding for improved long-distance comfort. The Street Twin is distinguished from its predecessors by new bodywork and styling. Still, it is equipped with ride-quality and safety technologies comparable to those of many more extensive motorcycles now on the market. 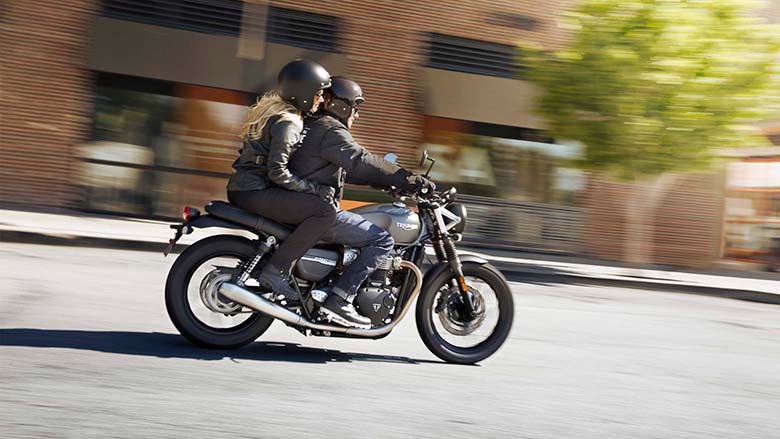 The new Bonneville Street Twin, essentially the British equivalent of the UJM and has an old-school, standard-street bike construction, maybe your Huckleberry if you’re searching for a vehicle with strong historical roots and plenty of Britishness on the side.

The extensive blackout treatment, bellow gaiters, and bobbed fender provide a link to the traditional custom scene. The lone splash of color is found in the paint on the fuel tank. The blackout extends to the front headlight can, triple clamp, handlebar, and mirrors, as well as the frame, swing arm, and powertrain.

Traditional knee reliefs taper the 3.2-gallon tank to offer it an all-up-front appearance and enough of that special something that always has distinguished Trumpet machines from their competitors.

With a simulated tuck-and-roll p-pad under a smooth finish on the driver’s seat and fold-up, frame-mount foot pegs to complete the passenger comforts, a bench seat fits the pilot and pillion. The passenger doesn’t have to absorb every bump in the road while sacrificing your riding partner’s comfort and confidence for simplicity’s sake because the pegs affix to the frame rather than the swing arm (looking at you, Harley-Davidson).

The taillight, turn signals, and tag light are mounted on a blacked-out rear fender using LED technology, and the license plate itself extends the coverage to reduce the amount of sheet metal out back. The Street Twin isn’t precisely a knee-dragger bike and won’t likely lean in far enough that an exhaust clearance becomes an issue. However, the upswept mufflers establish a connection to the racing world in that they are jacked up to avoid scratching the silencers on deep bends.

Overall, you can mark me as a fan of the Street Twin based only on appearance since it perfectly embodies the essence of Triumph’s long-standing flair in classic yet contemporary packaging. 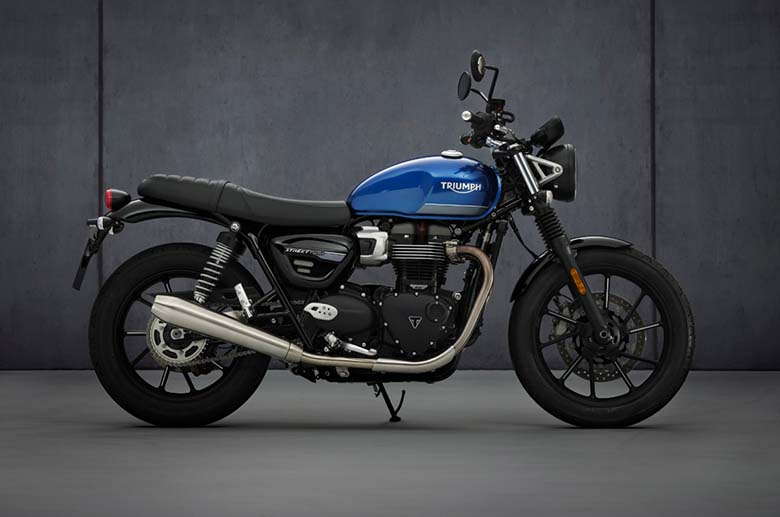 The Street Twin’s double-downtube/double-cradle frame is constructed of tubular steel elements, also used to build the swing arm’s yoke-style, rectangular-section frame for strength, longevity, and stiffness. The new Street Twin has an exquisite character that is eager in the corners and quick with the reversals, thanks to the steering head’s establishment of a sharp 25.1-degree rake angle with a 4-inch trail over a 57.1-inch wheelbase. Although the seat height of 30.1 inches off the deck may put many shorter riders on tiptoes, it is still lower than the seat height of standard sport bikes.

With a set of traditional bellow gaiters that give it an old-fashioned style and cover the total area of the inner fork tubes and the fork seals at the upper side of the sliders, a pair of 41 mm, run front forks float the front section on fixed values.

Steel wire spokes and aluminum or steel hubs are not preferred over cast aluminum. The hoops are arranged as follows: 100/90-18 in front and 150/70-17 in the rear. 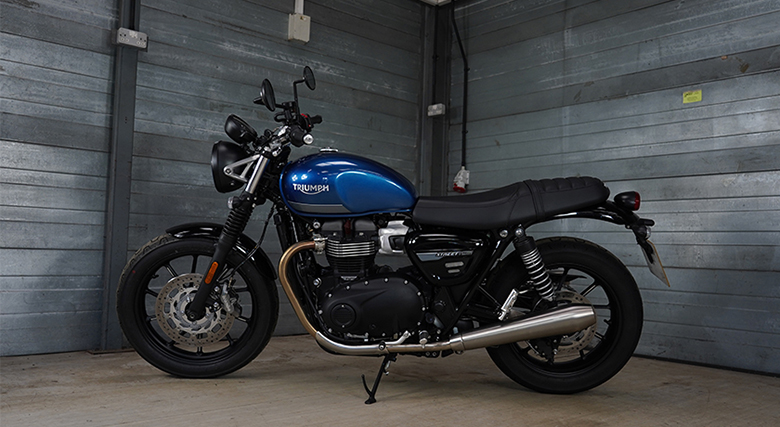 The rear suspension of this vehicle is supported by dual rear shocks, with the only suspension adjustment being the required preload adjuster. Four-piston axial Brembo calipers with a single anchor bite the 310 mm front disc, followed by twin-piston Nissin calipers and a 255 mm rear disc with ABS protection on both ends.

The Street Twin’s pulsing heart is Bonneville’s electricity. It is available as a liquid-cooled parallel twin. However, the crank is offset by 270 degrees between sparks one and two rather than firing in an even 180-out pattern. It improves rear traction on soft terrain and in bad weather by giving the engine a little lope at idle and providing a lengthy off-power instant that allows the rear tire to engage before the next power pulse arrives.

Four valves per cylinder multiplied by one overhead cam keeps the top end light and straightforward, contributing to the iconic appearance of the Bonneville engine. The mill’s traditional design demonstrates its deep British origins and unmistakably completes the look, helping to sell the overall package.

With an 11-to-1 compression ratio and a nearly square bore and stroke that give the lump its 900 cc displacement, mid-grade gas or an octane booster will be required to eliminate knock, ping, and run-on.

A ride-by-wire throttle control transmits the rider’s commands to the engine, but two riding modes (Rain, Road) and a switchable traction control function that helps you keep the bike mud-side down modify the final result at the back wheel.

By preventing excessive back-torque from jerking the rear wheel free, as you could encounter on strong downshifts and engine-braking tactics, a slipper clutch offers another layer of safety net. With 64.1 hp and 59 lb-ft of torque available, it combines engine power with the five-speed gearbox to achieve a peak speed somewhere around the 120 mph level. 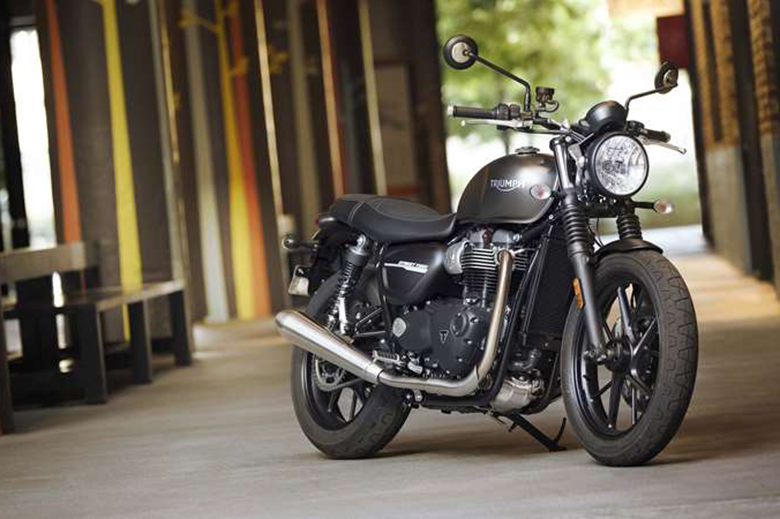 The standard model, Bonneville Street Twin, costs $9,400 and comes in Jet Black, but you’ll have to fork up an extra $350 to get one in Matte Ironstone or Cobalt Blue. The Limited Edition Street Twin Gold Line will also be available this year, and one of the 1,000 hand-painted, sequentially numbered models will cost you $10,150. 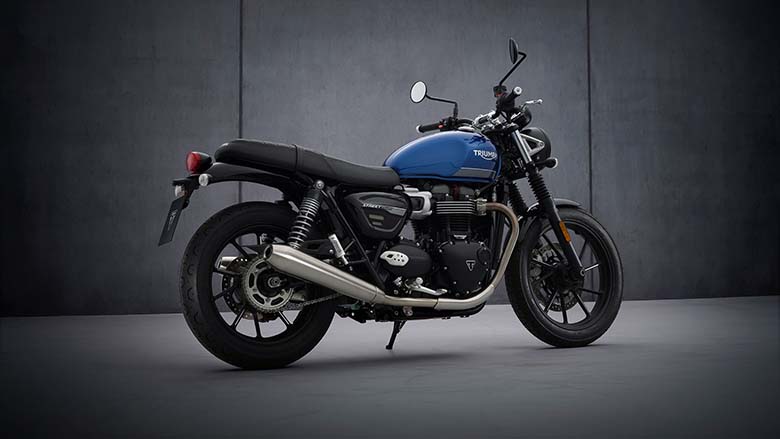 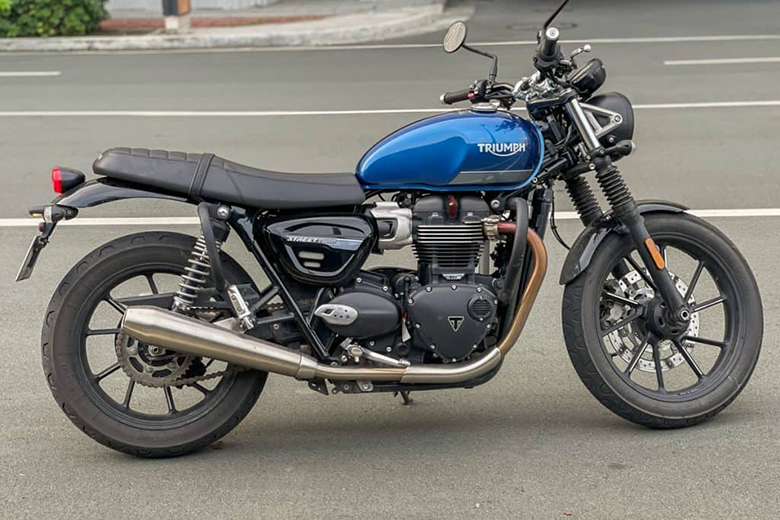 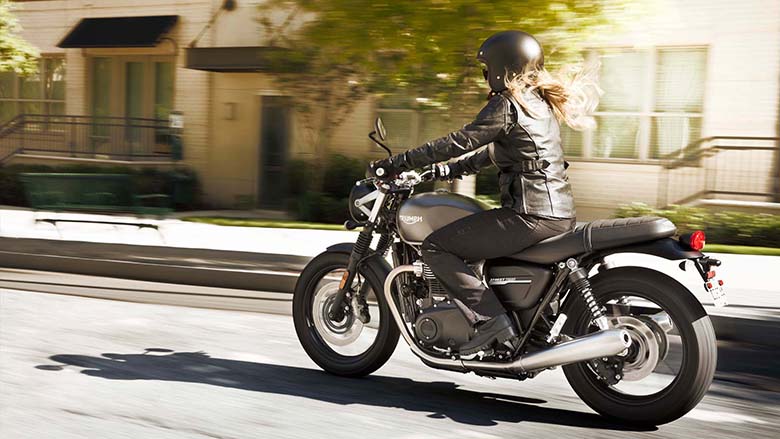 With excellent blackout treatment, bulging fork gaiters, and an old-school panache that dates back to the K-Model of the early 1950s to put it on an equal historical footing with the Brit, H-D hits many of the same high notes in the aesthetic domain. The Sportster’s panache lends a V-twin engine to the mix, similar to the Bonneville plant, and comes with the natural offset to the firing sequence for a particular bit of flair.

With only that distinctive lope at idle compared to Bonnie’s 59 pounds, Harley starts to lose power statistics, but with a peak speed of 118 mph, its top end is still competitive. The electronics aren’t equivalent, though. The Triumph’s traction control and rider modes features are unaffected by the Sportster’s lack of any ride-quality or safety equipment. Keep in mind that even the ABS, which costs $795, is an optional feature on the Sporty when evaluating the $9,499 beginning price of the H-D vehicle.