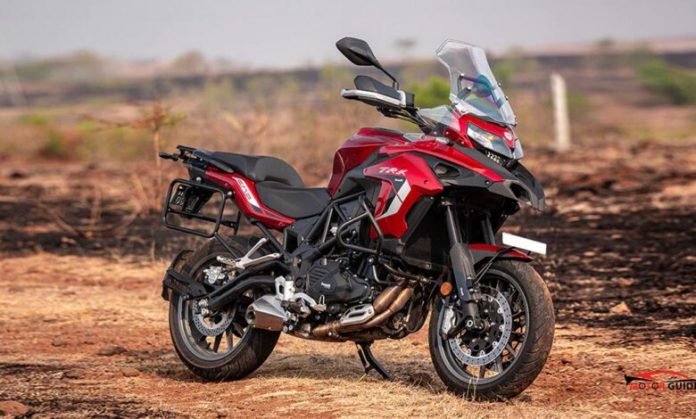 The adventure-focused TRK 502 is a strong contender in the middleweight adventure market, which is constantly expanding. TRK is a reliable travel companion whether you are traveling locally or nationally. Even your regular commute can become an adventure thanks to ergonomic comfort, adequate wind and weather protection, firm suspension, and a powerful twin-cylinder engine. 359,000, the TRK 502 is available with ABS specification.

The TRK 502 has strong 50mm upside-down front forks and a preload-adjustable rear mono-shock. The bike’s suspension system provides excellent comfort for the rider and any passenger on any surface. The TRK 502 has incredible stopping power thanks to the twin ABD front brake configuration with 320mm rotors and two-piston floating calipers, which further enhances the entire package of the bike. The rear disc diameter is 260mm and also ABS.

The TRK 502’s 500cc parallel twin engine, mounted on a classic Benelli steel trellis frame and featuring four valves per cylinder and two overhead cams, produces 46 horsepower at 8500 rpm and 45 Nm at 4500 rpm, which The bike gets a great response. Power throughout the rev range. A 6-speed manual gearbox with a chain drive sends power to the rear wheels. 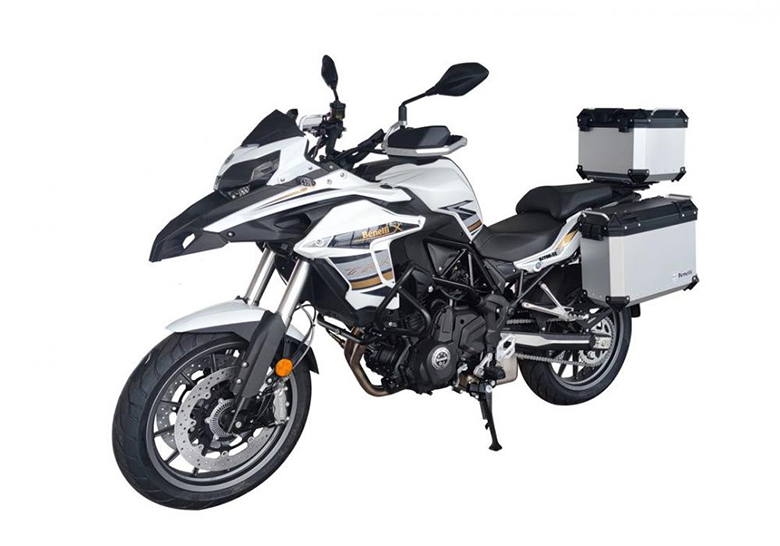 So let’s start with what might be the most significant selling point of this motorcycle: the design. Some may opt for the Benelli TRK 502 simply because we Indians appreciate when our vehicles have a distinct presence on the road. The front of the TRK 502 has a beak-like appearance typical to some larger ADVs. Many would agree that there is a definite Ducati Multistrada link in the general design, which looks pretty proportional.

A body-colored front fender, stronger-looking knuckle guards, textured finish on the rear-view mirrors, and a revised instrument cluster are all new additions to the new BS6 edition of the bike. Additionally, the switchgear is more upscale, and the switches have backlighting. When choosing heated grips and aftermarket fog lamps for your bike, you can use two additional buttons on either side of the handlebar. So, the TRK 502 is now a better deal than it was in the past, thanks to all these upgrades.

A body-colored front fender, strong-looking knuckle guards, textured finish on the rear-view mirrors, and a revised instrument cluster are all new additions to the new BS6 edition of the bike. Additionally, the switchgear is now taller, and the switches have backlighting. When choosing heated grips and aftermarket fog lamps for your bike, you can use two additional controls on either side of the handlebar. So, the TRK 502 is now a better deal than it was in the past, thanks to all these upgrades.

Talking about the powertrain details, the 500cc, twin-cylinder, liquid-cooled engine that powers the BS6 Benelli TRK 502, when mated to a six-speed gearbox, churns out a measly 47.5 horsepower and 46 Nm of torque produces after a short squeeze of the starter, the parallel-twin motor starts up and settles down to a rather lovely and dull hum. The best part about it is that, like other Benelli motorcycles, the TRK 502 has a pleasant exhaust noise that any inline tune can understand. The bike moves smoothly off the line as the engine has a powerful low and mid-range. However, it should be prominent that this engine does not have a high rpm range and takes a while to build revs. 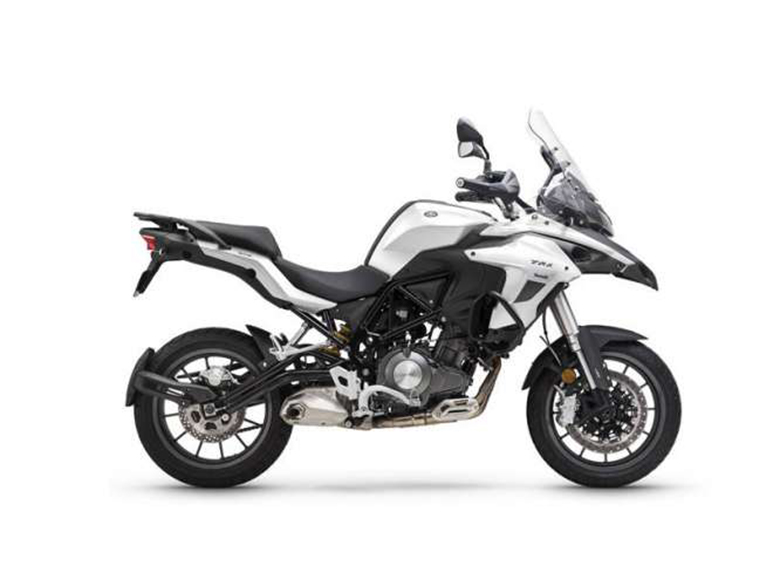 Above 3,500 rpm, the engine starts working at its best. The motor’s sweet spot is at 5,000 rpm, and at this speed, the bike can cruise at 100 mph throughout the day. You’ll love how the bike sings in pure harmony if you keep going at this speed on free-flowing expressways. It is not a great idea to push this bike beyond 105-110 kph as the vibrations on the handlebars and footpegs become noticeable.

Additionally, the 235 curb weight can be discouraging as all that extra weight makes you want more power when you’re in a spirited riding mood. Even so, the TRK502 is ideally suited to cruising at 100 km/h with ease. The TRK 502 reached its top speed during our test runs, 159 km/h.

Additionally, the TRK 502 will give you a realistic range of around 450 km on a full top-up, which means longer journeys thanks to the sizeable 20-liter fuel tank and a combined fuel economy of 24 km fuel. During low fuel stops. That’s what we got during our tests.

Even riders having a height of 5’5″ can comfortably ride this ADV as the seat height is 800mm. The TRK 502 is a very comfortable bike thanks to its upright handlebars and large, well-kept seat. Cushioned seat. Even a rider with average experience can complete 200km on this bike without needing to stop, thanks to the excellent comfort of the seat. The suspension is on the soft side and quickly absorbs most undulations.

Since the TRK 502 has neutral handling, you shouldn’t expect it to turn in quickly. Additionally, the tires’ grip is only adequate and not spectacular, so you may be holding your breath whenever you approach a sharp turn.

At triple-digit speeds, the TRK feels firmly planted and has impressive straight-line stability. The TRK 502 has a good ride quality, which helps make it a surefire hiker. As for the brakes, the bike has two 320mm front discs and a 260mm rear disc, and they all work well to stop this beast, but we thought the posterior bite and input could be more robust. The TRK 502 is entirely controllable but not maneuverable in traffic due to its vast size. Additionally, even though the extra weight seems to disappear when you move, it bothers you when you have to manage the bike in your parking lot. So those who have a gym membership will benefit from it.

Price in India and Verdict

One factor that contributes to its appeal is the price of the BS6 Benelli TRK 502. It is now the cheapest twin-cylinder adventure touring bike available in India, priced at Rs 4.86 lakh (prices have gone up by just Rs 6,000). And it significantly undercuts its competitors. To be precise, the Suzuki V-Strom 650 XT is about Rs 3.5 lakh more expensive than the TRK, which is also Rs 2 lakh cheaper than the Kawasaki Versys 650 and the Honda CB500X. However, it also has to be admitted that it’s not the most capable or feature-rich adventure tourer in its category. 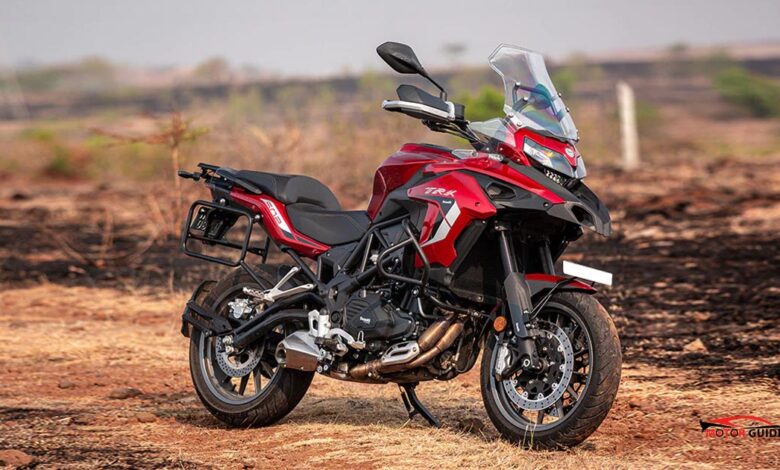 In that case, the TRK 502 could be the ideal bike for you if you want to get your first full-size ADV, and that too on a tight budget. Even though the TRK 502 lacks some of the capabilities of full-fledged ADVs, you’ll undoubtedly turn heads on the road thanks to this vehicle’s sheer presence. The TRK 502 will also satisfy you for a long time as it has just the right combination of power and features.

In conclusion, Benelli TRK 502 is one of the best bikes you can purchase in India if you have a total budget of Rs 5 Lakh, even if it is not a flawless motorbike due to its king-size features, powerful motor, and fantastic mailing skills. 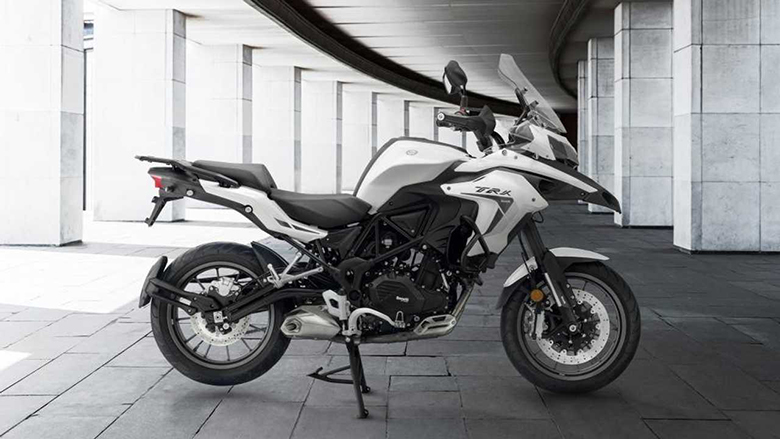