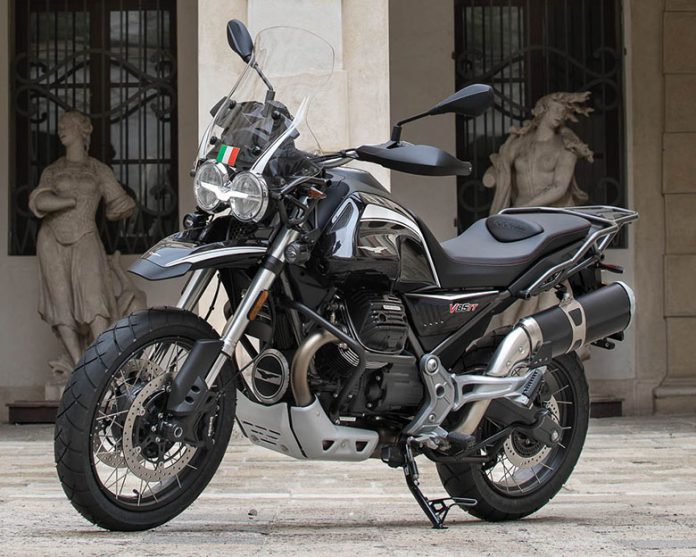 The Cuirassiers’ Regiment, the elite Carabinieri force in charge of the honor guard and security of the President of the Italian Republic, picked Moto Guzzi as its first motorbikes in the post-World War II period. Since then, the Head of State’s guards has ridden motorcycles produced in Mandello del Lario, resulting in a historical blend of elegance, loyalty, and status, becoming one of the most well-known and adored emblems of “Italianism” across the world.

The V85 TT Guardia d’Onore, like the V85 TT motorcycles provided to the Head of State at the Quirinal Palace, has the traditional black livery with white graphics that distinguish the Cuirassiers’ Moto Guzzi machines. The white accents continue down the front mudguard, onto the fuel tank, and the side panels, as well as on the enlarged Touring windshield. Along with the center stand, engine protection bars, and additional LED lights, the latter is included in the basic equipment package. On request, a set of side panniers unique to this model are available. 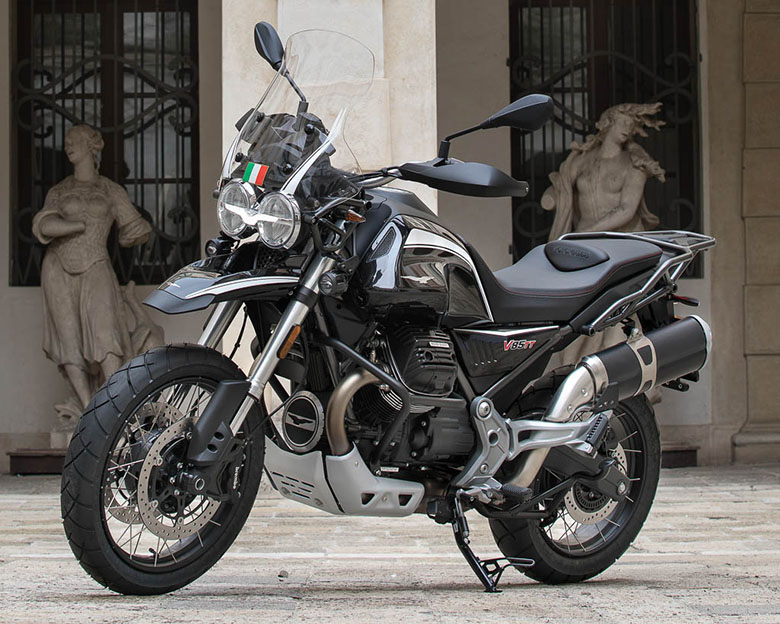 The Moto Guzzi 2022 V85 TT Guardia d’Onore will be made in a limited edition of 1946 units, a number that commemorates the first 75 years of the Mandello Eagle’s connection with the Cuirassiers Regiment, as well as the year the Italian Republic was founded. The progressive number of the unit, from 1 to 1946, is etched on the handlebar riser to emphasize the unique uniqueness of this variant.

Everyone who buys this unique V85 TT gets a beautiful commemorative case that contains a pamphlet about the history of Moto Guzzi motorcycles used by the Cuirassiers and a stamp collector’s folder with the stamped stamp produced on the occasion of the Moto Guzzi Centennial.

A Dream with Open Eyes

The V85 TT and V85 TT Travel can’t be defined any other way. Thanks to a solid and enjoyable euro 5 engine that produces higher torque at low and medium speeds. An adventure led by five riding modes intended to surprise even the most seasoned riders. Tubeless wheels and fresh graphics make every travel more enjoyable. You can’t wait to get back in the saddle, can you?

Two additional Riding Modes join the three currently available, making it easier to regulate traction control, ABS, and the Ride-by-Wire throttle’s responsiveness. Cruise control and an all-new color TFT instrument panel are standard features. Moto Guzzi MIA, a multimedia platform that links the smartphone to the car and extends the instruments’ functionality, is also included in the extensive list of specific accessories.

The Mandello Eagle’s construction scheme is based on the distinctive one used by all Moto Guzzi bikes: an air-cooled 90-degree transverse V-twin with rod and rocker arm distribution and two valves per cylinder, as is the Mandello Eagle’s pride and history. With upgraded engine control electronics, the unit has more low and mid-range torque. 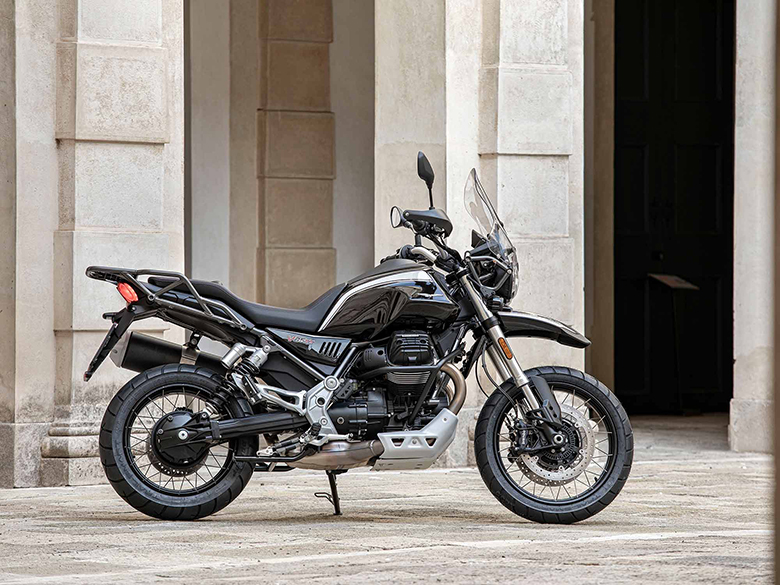 You don’t ride; you live. It’s essential, practical and full of the flair that has made Moto Guzzi famous. Without sacrificing comfort or performance, the V85 TT is ready to accompany you from your daily commute to adventurous trips. An increasingly unique bargain in a more homogenized market, the V85 TT accomplishes an ambitious aim by blending a legendary look with current travel enduro capabilities. As a result, it is the first and only classic enduro bike on the market.

Distance is Never a Problem

V85 TT Travel gets all of the V85 TT’s technological improvements. It is distinguished by its comprehensive set-up, which includes the Touring windscreen, the Urban series side cases with high capacity and decreased lateral dimensions, a pair of extra LED lighting, and a set of adjustable heated grips, as well as the Moto Guzzi MIA multimedia platform.

The Cuirassiers’ Regiment and the Eagle of Mandello have a lengthy history that dates back to the second postwar era when sophisticated automobiles started to replace outmoded royal carriages for institutional travel involving the President of the Italian Republic. As a result, the escort force, which consisted of select – and exceedingly tall – elite Carabinieri, needed a mode of mobility other than horses to keep up with the motorized vehicles.

The decision went very readily to Moto Guzzi, a great source of national pride, partially because of their innumerable successes in motorcycle racing since the 1920s, confirming years of partnership with the Italian military services.

The Cuirassiers adopted four distinct Moto Guzzi models in little over five years because of the necessity to fast motorize a regiment that had previously been entirely equestrian. As a result, the Alce, the supreme military motorcycle, the Superalce, the Astore, and its direct descendant, the Falcone Sport, were added to the regiment’s fleet.

The motorcycles, on the other hand, were only available from the Astore and were custom-made to meet the demands of the Cuirassiers, especially those related to their height.

The Falcone Sport (with an electric starter from 1959) continued to transport the President of the Republic and many foreign Heads of State visiting Italy as the 1960s approached. The first significant change in the Cuirassiers’ motorcycle fleet occurred in 1968, keeping with technological advancements in the motorcycling industry. The single-cylinder was exceeded with the V7 Special units, ushering in the new Moto Guzzi period and the groundbreaking transversal V-twin, destined to become the company’s calling card. 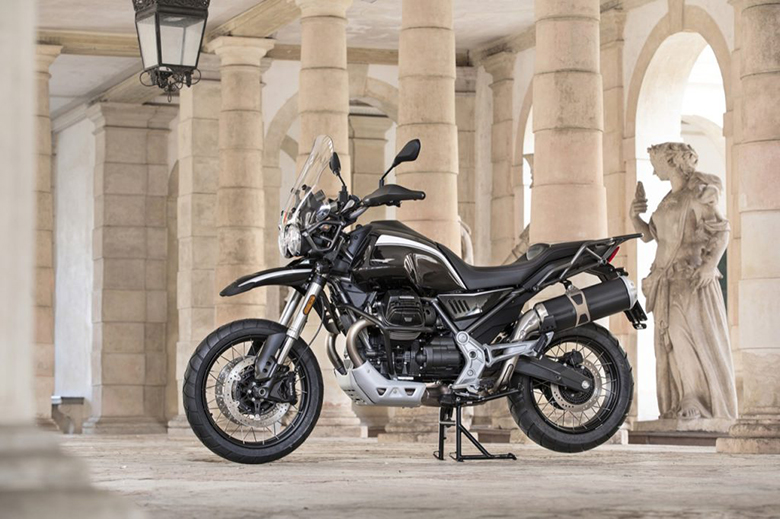 The V1000 I-Convert, one of Moto Guzzi’s most revolutionary motorcycles, was released in 1975. The I-Convert began to work immediately, accompanying the President of the Republic, thanks to its enhanced engine capacity of 1000cc and its unique integrated braking system, laying the path for the following 40 years of Moto Guzzis designed for this task.

The Cuirassiers and different Moto Guzzi California models, which became more muscular and increased engine capacity, began a lengthy association in the mid-’80s. The displacement ranged from 948 ccs in the California II in 1985 to 1380 cc in the section monarch, the California 1400 Touring, which showed well in the Cuirassiers’ parades and presidential transfers starting in 2007.

In May of this year, which also happens to be Moto Guzzi’s 100th birthday, the Eagle brand awarded Sergio Mattarella, the current President of the Republic, with V85 TT units, which he added to his escort fleet.

The brand-new motorcycles have a livery designed particularly for the event, chromatically similar to the California 1400 units previously utilized. 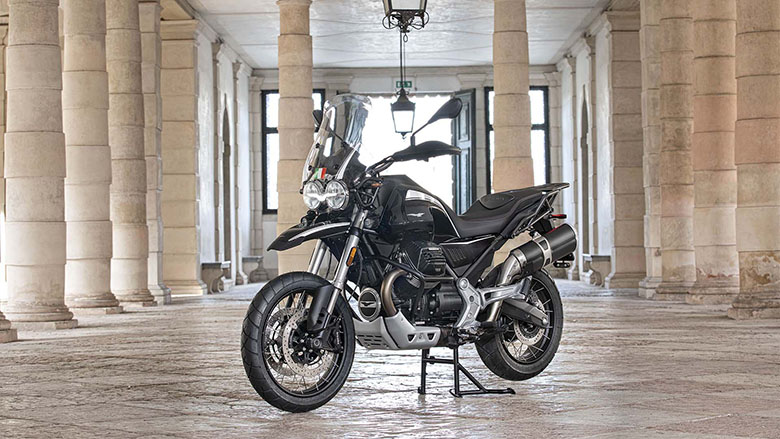