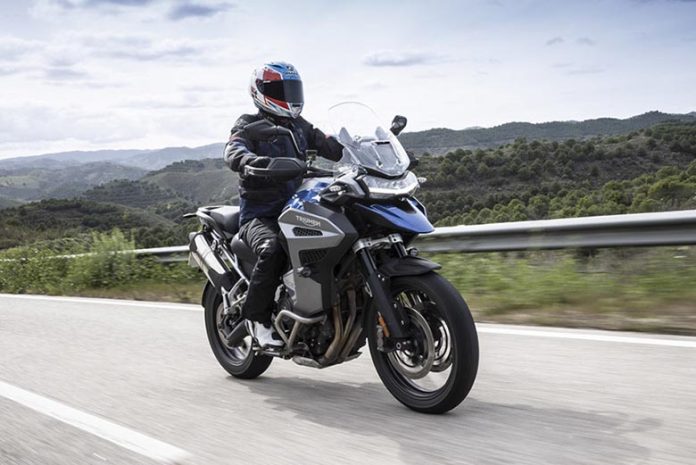 The 2022 Triumph Tiger 1200 GT Adventure Motorcycle represents a new generation of large-capacity adventure vehicles emphasizing road-focused character, performance, and flair. To that end, the brand-new Tiger 1200 is the most capable, agile, and maneuverable large-capacity adventure bike on the market. It features all of the advantages of Triumph’s groundbreaking T-plane triple performance system but is significantly lighter and more powerful, with class-leading handling and specs. The latest iteration provides the best of both worlds by introducing a whole new Tiger line-up, the first two of which are newly redesigned Tiger Explorers with 30-liter tanks. This new generation also offers the most dynamic and exhilarating driving experience to date off-road while delivering a step change in capabilities and performance on the road. 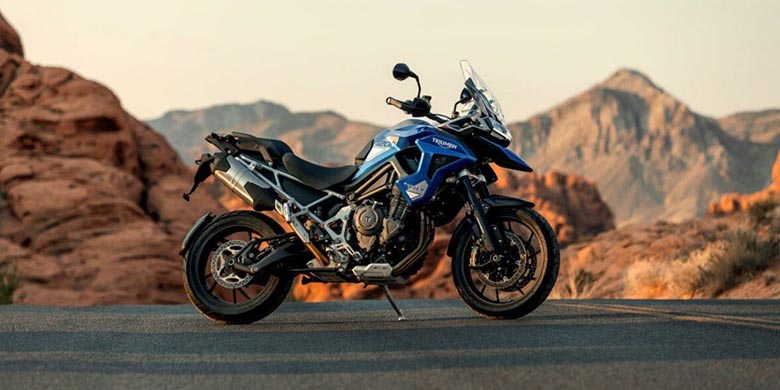 All the features that have made the Triumph Tiger 900 so well-liked among middleweights are included in the new T-plane triple crank. The Tiger blends the low-end tractability of a twin, which makes it fantastic off-road, with the performance benefits of a triple, which make it even better on the city road, where riders spend the bulk of their time. The new Tiger 1200 engine has a T-plane crank that sends firing pulses to the cylinders at 180, 270, and 270 degrees, respectively, resulting in one short gap and two significant gaps between firings, which enhances the engine’s character and tractability at low rpm.

Compared to its predecessor, the new 1160cc engine is much more powerful, producing 150PS at 9,000 rpm and making the bike the most powerful shaft-drive motorcycle. The engine’s peak torque of 130Nm at 7,000 rpm is 8 Nm more than the previous generation’s.

The vehicle’s newfound dynamism and appeal may be attributed mainly to its upgraded engine, retuned mechanicals, and T-plane triple crank. Delivery of the extreme triple power and torque is relatively constant over the rev range, and the irregular firing interval contributes to a superb feel and tractability at the bottom end. Every Tiger now comes standard with a new lightweight, low-maintenance shaft drive, an invaluable feature for riders using their bikes on extended trips.

This engine is an entirely new design compared to its predecessor. It includes the bore and stroke, crank, cylinder head, gearbox, clutch, and even the shaft drive and bevel box. The total package of the new engine is substantially smaller than before, which alters the riding qualities, thanks to the redesign of every component to be much lighter and smaller.

The new, minimally intrusive silencer is a welcome improvement, vastly improving the aural environment and giving it a distinctive new triple tone and bark.

The New Benchmark for Handling

Thanks to its lightweight chassis, class-leading equipment list, and innovative rider ergonomics, the Tiger 1200 has been designed to set the standard for handling on- and off-road excursions.

Compared to its predecessor, the new Tiger is almost 25 kilograms lighter, and it may be up to 17 kilograms lighter than its nearest shaft drive rival, given identical specifications. It is the result of a comprehensive effort to reduce the overall bike’s weight, which took into account every single part.

Due to the new Tiger 1200’s generation-specific wheel proportions, riders may choose the experiences that are most suited to them. Rally Pro and Rally Explorer feature a 21″/18″ tubeless spoked design for incredible off-road performance. At the same time, the GT, GT Pro, and GT Explorer have a 19″/18″ cast aluminum arrangement for more dynamic road riding characteristics. Metzeler TouranceTM tires are standard on all GT models because of their superior grip and stability. In contrast, Metzeler Karoo Street tires are fitted to all Rally models for actual all-terrain performance. For extreme off-road riding, the Michelin Anakee Wild is the preferred tire. 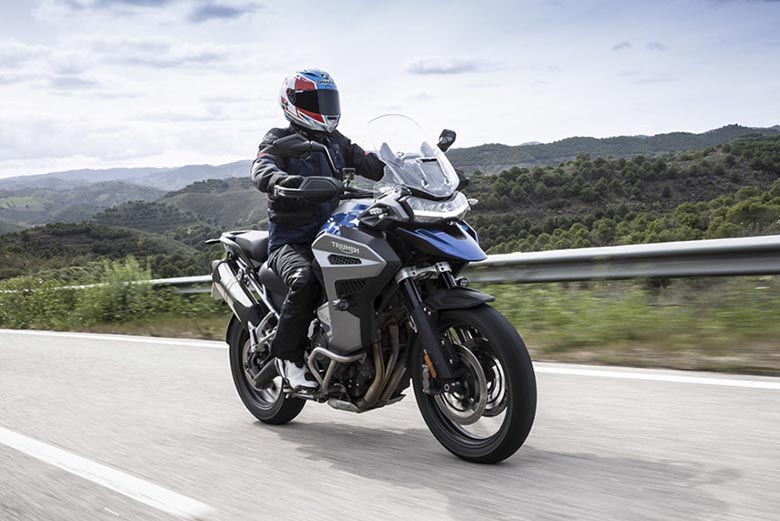 Brembo Stylema® brakes, the industry standard, are standard on all Tiger 1200 models, ensuring robust and progressive stopping. These meet the needs of long-distance road riding and the Rally models’ advanced off-road adventure capabilities.

Modern Optimized Cornering ABS, assisted by an advanced IMU, comes standard on all of the latest models (Inertial Measurement Unit). The lean angle and optimal amount of ABS intervention are both determined by the IMU’s constant monitoring of the motorcycle’s motion (pitch rate, yaw rate, roll rate, vertical acceleration, lateral acceleration, and longitudinal acceleration). With its progressive feel and reach adjustability, the Magura HC-1 levers enhance the rider’s comfort and control.

The Tiger’s new frame is 5.4 kg lighter than the old one. It features a bolt-on aluminum rear sub-frame and new bolt-on pillion hangers, both of which were developed primarily in response to customer feedback and contribute significantly to the bike’s dramatic reduction in weight and improvement in its ability to turn.

The aluminum fuel tank and the new tri-link swing arm (1.5 kg lighter and stronger than the previous single-sided setup) also contribute to the weight reduction.

The seat on all of the new 1200s has been slimmed down at the front, where it meets the tank, to increase the rider’s confidence at low speeds and during non-riding actions and to enhance comfort and control. There is a built-in, easily changeable two-position seat mechanism on all models that lets riders modify the seat height by 20mm to their preferred setup.

Seat height options range from 850 to 870 millimeters on the GT, GT Pro, and GT Explorer and from 875 to 895 millimeters on the Rally Pro and Rally Explorer. By selecting the accessory-fit low-seat option, buyers may lower their seating position by an extra 20mm.

New aero screen diffusers deflect wind away from the rider and pillion for improved comfort, and the screen’s one-handed adjustment system is also a nice touch.

The handling and rider comfort of each Tiger 1200 model is enhanced with a customized handlebar position. They are 20 millimeters wider than their predecessors, making them more stable off-road. The GT Explorer and Rally Explorer have handlebars that are 16mm taller than the rest of the series. It gives them an even more commanding appearance. Each model’s foot peg positions have been fine-tuned to maximize the rider’s sense of security and command.

For more secure and comfortable riding, each Tiger 1200 model comes standard with handguards, while the GT Pro and GT Explorer have an aluminum skid guard and an aluminum sump guard. The Rally Explorer comes standard with engine and fuel tank protection bars; these bars can also be found on the GT Explorer and the other two Rally variants. All of these parts may be purchased separately and installed on the versions where they do not come standard.

The new generation sets a new standard for Tiger technology with the inclusion of many cutting-edge features to enhance the ride and deliver an increase in safety, comfort, and control.

The Triumph Blind Spot Radar system is a fresh new addition to the GT Explorer and Rally Explorer and was developed in partnership with Continental to provide two crucial safety features. If the rider is trying to change lanes while an oncoming vehicle is in the way, Lane Change Assist will provide a louder warning. Using a radar that scans the area behind the motorcycle, Blind Area Assist may warn the driver of oncoming traffic. 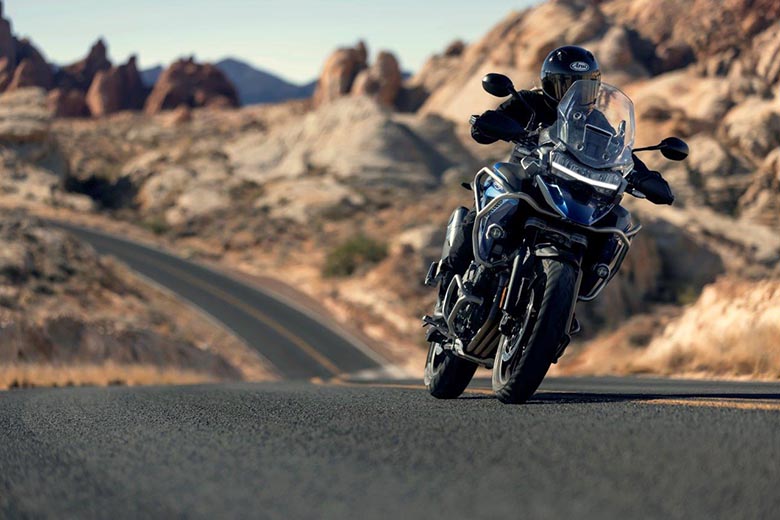 An all-time high score of 7 “The rider can access all the pertinent information they might need thanks to TFT instruments with optically bonded displays and a new graphics package. In addition, the My Triumph Connectivity System, which provides hands-free calling, navigation, and GoPro remote operation, is standard on all models.

The user may have as many as six different riding modes to choose from, each of which alters the bike’s suspension, anti-lock brakes, traction control, and throttle response to suit different terrains and riding styles. Triumph’s Off-Road Pro riding mode is the most extreme off-road configuration for cutting-edge off-road adventure, with ABS and traction control turned off and an off-road throttle map. This mode is exclusive to the Rally Pro and Rally Explorer models. For increased security and command under challenging circumstances, Rain mode restricts power to 100PS and provides the most intervention.

With a new revised minimal bodywork, clean contemporary lines, and a substantially lighter front end, the new Tiger 1200 line-up delivers a distinctive new look that is just as ambitious in its aesthetic goals as its improvements in handling and performance.

The GT models now seem even more focused on the road, while the Rally models have a more aggressive stance than before owing to the new 21 “configuration with the front wheels in front of the axle, giving the vehicle a more off-road stance and stance.

The newest model is more compact, with a lower waist and a narrower standover, making it easier to get on and off and move about while riding. 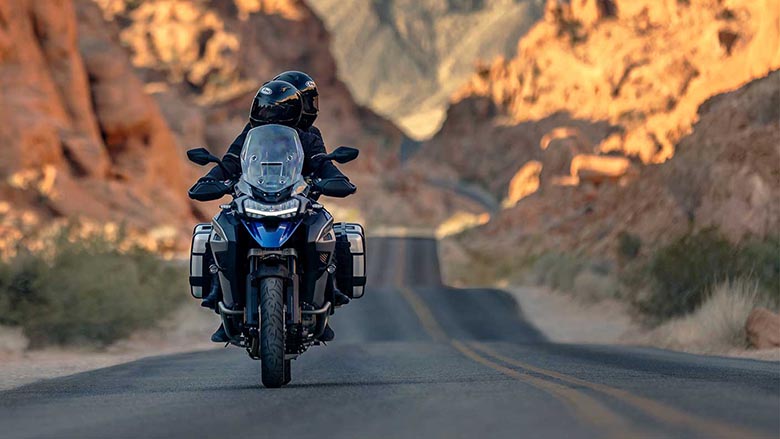