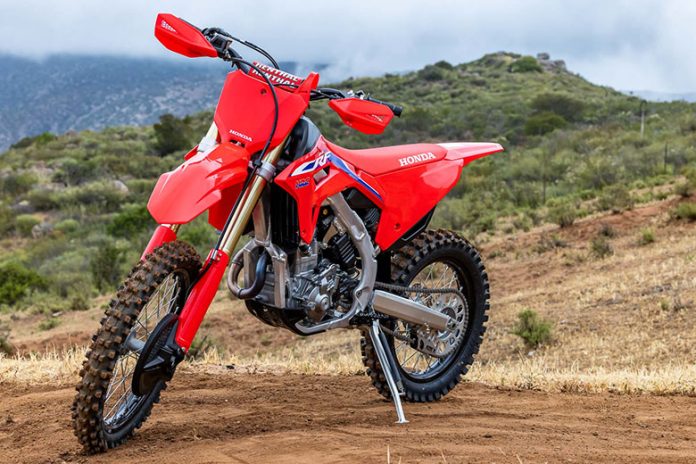 For 2022, Honda released a brand-new version of their CRF250R motocross bike, which shares many of the same upgrades with this actual closed-course off-road weapon. Closed-course off-road races, such as the NGPC, GNCC, and WORCS, are controlled by top teams like SLR Honda, JCR Honda, and Phoenix Racing Honda; hence, these improvements contribute to reduced weight, more low-end power and improved lifespan, all of which are in the teams’ favor. Plastic hand guards, an 18-inch rear tire, a tuned suspension and electronic control unit (ECU), and a resin 2.1-gallon fuel tank are just some of the model-specific characteristics that make the CRF250RX ideal for those purposes. 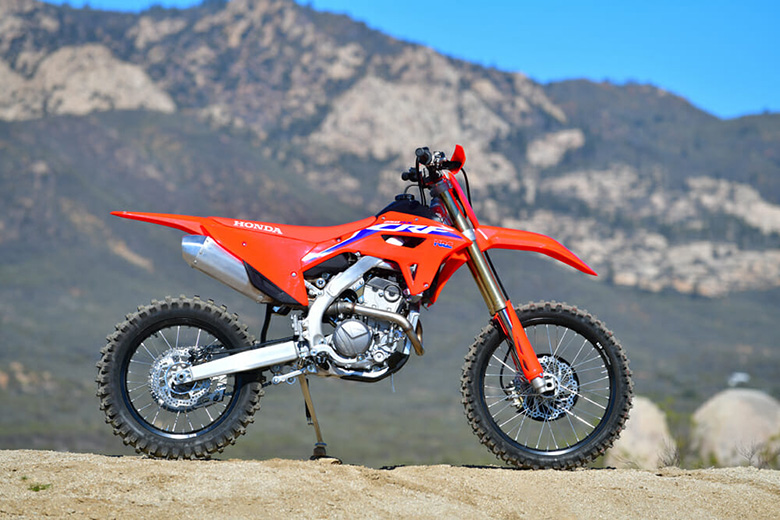 The CRF250RX is a single-cylinder, four-valve, liquid-cooled, 249cc engine with double-overhead camshafts. Increasing low-rpm torque requires adjusting the air intake, adjusting the valve timing, and redesigning the exhaust port so that it is straighter. There is a 20% increase in power at 6,500 rpm thanks to the upgrades, and the engine still has a lot of pep at the very top of its rev range.

By altering its shape, the air box has gained 78% more volume, mainly on the filtered side of the filter. The fuel injector angle was increased from 30 degrees to 60 degrees, and the throttle hole was enlarged to 44 mm, extending the spray to the butterfly’s tail. This combination of upgrades better cools the intake charge, which increases air-intake efficiency and performance at low rpm. The threaded design has been swapped out with a spring-loaded clasp, making it much simpler to change the air filter in the revised air box. 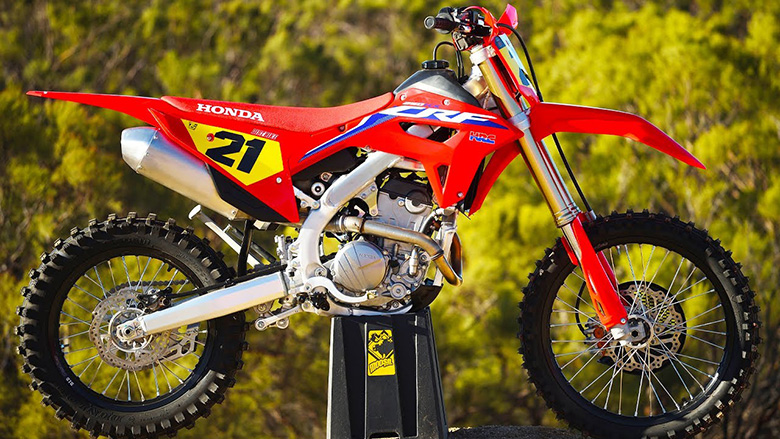 To improve torque and low-rpm performance, the exhaust system only uses a single, straight exhaust outlet. The single muffler has internal baffles made specifically for torque distribution, and it is lighter than the initial twin-muffler design. Due to the lower cross-section and more rider mobility, the left header and muffler were deleted. Currently, the single exhaust header is angled 74 millimeters closer to the engine.

To maximize engine performance, the ECU is programmed with new instructions that provide the optimum air/fuel combination and ignition timing over the whole throttle range and across the entire rpm range. Incorporating HRC into launch control improves holes hot reliability.

As a result, the clutch assembly had to be revised so that the power could be sent to the rear wheel consistently. The clutch pack now consists of nine discs instead of eight, allowing for an increase in friction material and a reduction in wear on each disc. By adding another friction spring, we may reduce the tension on the main spring, reinforce the clutch basket for longer life, and enhance the lubrication to reduce wear. Clutch longevity has risen by 21% thanks to a lower primary ratio (3.047 vs. 3.473), as well as better lubrication. Improved clutch engagement feels, and a 4% reduction in lever pull weight. 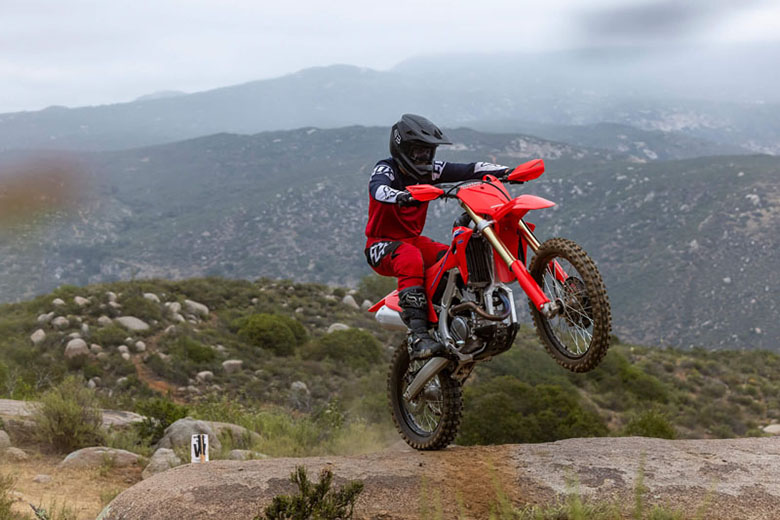 The five-speed transmission has been modified to make it easier to up- and downshift between second and third gear, as is customary on a 250 closed-course off-road bike. Reduced from three to two lead grooves and requiring just a single shift fork, the shift drum’s weight has been reduced by 17%. (As opposed to two as previously). The countershaft is now more rigid as well.

Adjusting the gearing makes greater use of the additional engine power in the low and medium rpm ranges, and the rider’s perception of gear changes improves. The first and third gears are now proper throughout a more significant speed range.

Since the previous generation of CRF250RX was already well-known for its excellent handling, it was a difficult task for Honda’s engineers to improve on the tracking, turning, straight-line stability, and readability of the frame. A lighter overall machine and no compromise in performance due to the engine’s enhanced power were the goals.

The rake was eased, and the wheelbase was shortened by 10 millimeters, bringing the total to 58.1 inches.

The CRF450RX was a significant inspiration for the aluminum frame’s 1.5-pound weight reduction for 2022. Primary spars have been redesigned to be more rounded and have smaller cross-sections, and the rib arrangement in the backs of the pivot plates has also been enhanced. To enhance the feeling of control in turns, we’ve reduced lateral stiffness by 20% while keeping the longitudinal rigidity we need for stability on a straight path. 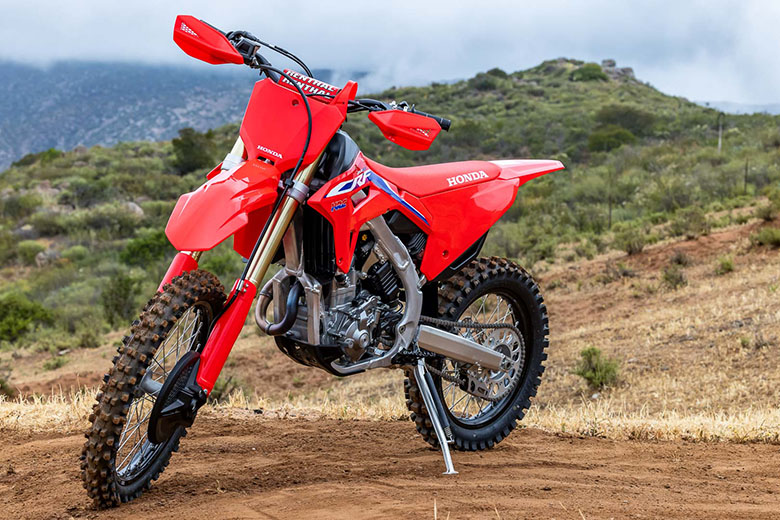 The simplicity of the subframe’s design allowed for the elimination of separate seat support, saving an additional.7 pounds.

The Showa fork has an adjustable coil spring and a 12.2-inch stroke, and a 49 mm diameter leading axle. The stiffness has been rebalanced with new reinforcing ribs and a revised upper and lower triple clamp design, resulting in increased flex characteristics that improve handling and feel during turns. The bike has sharper handling aspects and a more agile approach to corners, in addition to its improved performance in terms of traction and bump absorption.

Adjusters for the Showa shocks in the Pro-Link® rear suspension system have been moved from the left to the right to be more conveniently found. Backward movement of 12.3 inches. The relatively light steel shock spring allows the shock to weighing. Twenty-four pounds less than the equivalent component from the previous year. The swingarm is now shorter and has been rebalanced to match the frame’s rigidity, which improves rear traction and handling and provides more clearance while riding over ruts.

The black D.I.D rims, measuring 21 inches up front and 18 inches in the back, are both durable and aesthetically pleasing. Brake rotors in the front and back measure 260 millimeters and 240 millimeters, respectively, to distribute heat.

The 2022 CRF250RX comes with a set of Dunlop Geomax AT81 tires, which are known for their exceptional durability and versatility in off-road racing.

Though it draws many inspirations from the CRF450RX’s appearance, the CRF250RX is easily identified by its rider-active layout. The seat’s back is now 10 millimeters lower for a flatter configuration. In comparison, the right and left side plates are now 20 millimeters and 50 millimeters more inboard, respectively, resulting in a 70 millimeters smaller cross section at the rear. Additionally, there is less of a bump when joining panels on the side of the radiator shroud. These user-friendly ergonomic adjustments might make it simpler for the rider to adjust their body posture while turning, accelerating, jumping, and braking.

Modern radiators have integrated shrouds that don’t need a top and bottom cover anymore. Engine cooling is crucial to the enhanced performance and overall durability of the 2022 CRF250RX engine. Computational fluid dynamics (CFD) was used to design air-outlet vents in the shrouds and to optimize the number and angle of fins in the radiator grills. Radiator surface area is up 6% as a result of the expansion.

The seat was installed by moving it forward onto the subframe before being secured. Attachment tabs are located in front of the seat base on the new model, while tongues are located in the rear. The seat’s resistance to acceleration ensures easy installation, and the seat may be moved about the vehicle with no problems.

As a result, designers actively looked for and seized upon every possibility to lighten the vehicle’s load. For example, the radiator shrouds, side panels, and seat are now held with just eight fasteners rather than the prior total of 12. In addition, 8 mm heads have been installed on all critical bodywork bolts.

Still, a 180-degree-rotatable clamp holds the Renthal® Fatbar® in place; with two attachment points, four mounting options within a 26-mm range are available. 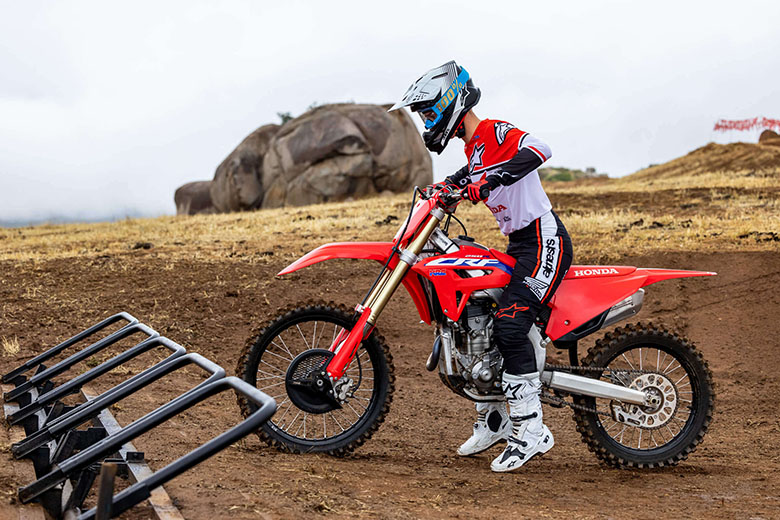