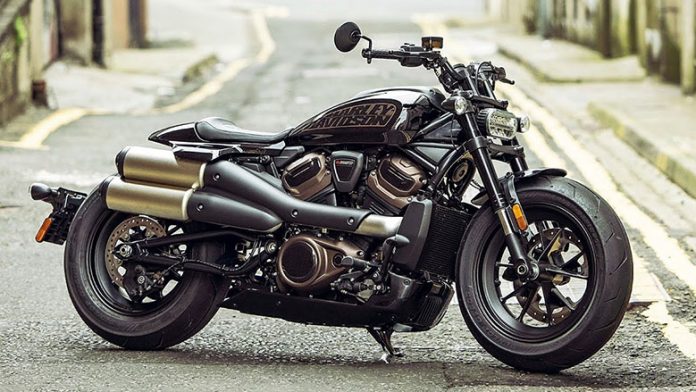 The exhilaration of dynamic acceleration, whereby exceptional power is unleashed, lies at the heart of the 2022 Harley-Davidson Sportster S Cruisers intended riding experience, moderated by stealthy technology. Torque on demand provides an uncompromising, exciting burst of push and exhilaration at any given moment, whether at a stoplight or around a corner.

The release of Sportster S marks the beginning of a brand new volume in the Sportster tale. A brand first established in 1957 that blew away the competition has been reborn to destroy today’s benchmarks.

There has been a long history of iconic V-Twin motorcycles, and now the next chapter is here. The Revolution Max’s powertrain is a liquid-cooled, double-overhead-camshaft V4 with variable valve timing that provides a wide range of torque and an instantaneous power band tailored to the rider’s needs.

The new pipes are corrosion-resistant 304-series stainless steel and are designed primarily to deflect exhaust heat away from the rider’s legs and tail section, evoking the glory days of H-D flat-track racing.

Digital gauges, ride modes, indicators, and turn-by-turn navigation including the Harley-Davidson app, are all housed in a 4″ round thin-film transistor LCD that connects via Bluetooth. There are buttons on both sides of the controls that allow you to access all of the features. 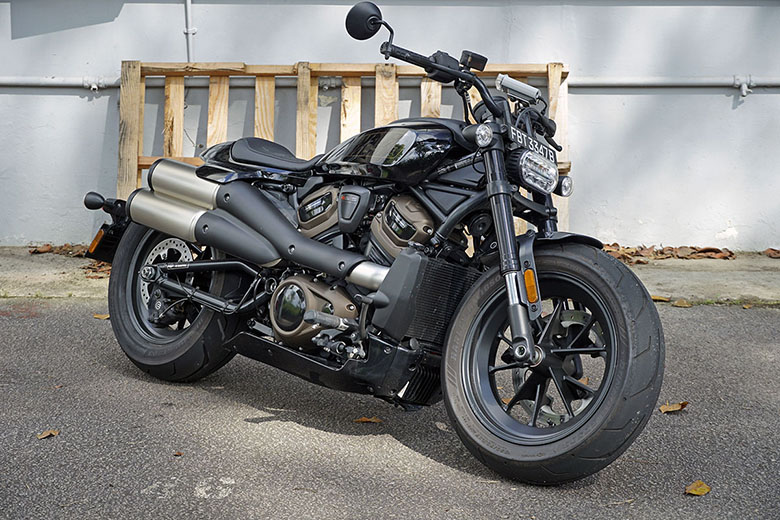 To reduce overall weight and keep handling precise, the Revolution Max 1250T is integrated into the motorcycle’s chassis. Thanks to a low center of gravity and a very rigid chassis, the performance is palpable.

With the new Cornering Enhanced Traction Control System that interferes based on the calculated available traction, the Sportster S has some of the most advanced and safest engine-control electronics of any Sportster. In addition, it has three different power delivery profiles that can be set up beforehand and a fourth that the rider can customize.

For propulsion, there is a Revolution Max 1250T engine, which, while still V-twin, does so at a wider angle than the standard 45 degrees, making it immediately apparent that this is not your grandfather’s Sportster. The liquid-cooled mill is already a technological and aesthetic head-turner, so there’s no need to draw attention to it. In a non-standard departure, the engine has a bore of 105 mm and a stroke of 72.3 mm, a ratio that allows for high RPM and impressive performance.

The variable valve timing and dual overhead cams are novel features that produce a broader and more manageable power band. That’s right, this H-D has a stated horsepower rating, and we can’t say we blame them. This engine has a lot to be proud of, what with its 121 horsepower and 94 pounds of torque, which peak at 6,000 rpm but are usable for the majority of the rev range.

The final drive is a carbon-reinforced belt and pulley, and in yet another departure from the norm, the motorcycle is mounted on the rider’s left side. The Sportster S, with its six-speed transmission and a maximum speed of 120.7 mph, is fast enough to be dangerous on public roads. 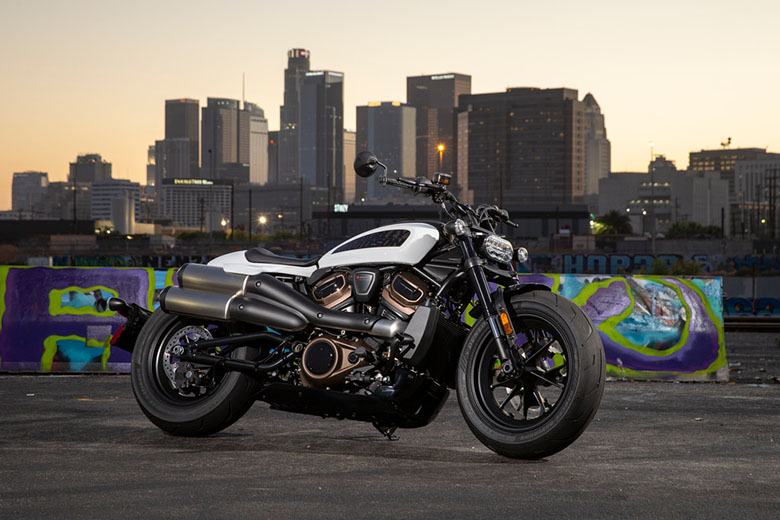 The design of the new Sportster S was influenced by the factory’s previous V-Rod models, which have since been discontinued. That was a broad allusion to the fact that the engineers’ demeanor is consistent despite their arrival via two very different methods.

It’s worth noting that the Bronx, who was supposed to use the same engine and be promoted as a nude Euro/Asian street fighter, met an untimely end. This new proper sport cruiser is competing for a different segment of the market. However, it may still attract some of the same types of buyers or at least offer an alternative to the details above.

The letter “S” provides a refreshing fusion of modern and traditional elements. While the inverted forks and rounded-off rectangle of the LED headlight nod to modernity, the fat tires, cut-down fenders, and general blackout treatment are all hallmarks of the old-school custom style that has long distinguished the breed. Every bulb is an LED, so you’ll have excellent vision in every direction.

The whole front end is painted black, right down to the short-rise handlebar and bar-end mirrors, and the same treatment continues behind the bike. The circular, four-inch instrument panel may look retro. Still, its contemporary, full-color TFT display combines standard gauges with settings for the vehicle’s technology and the ride’s comfort.

Even if your vehicle isn’t fitted with an Infotainment system, you can still use your phone to play music, take calls, and obtain turn-by-turn directions. You’ll need the Harley-Davidson app, a Bluetooth-enabled helmet, and a headset to use this feature.

Although the fuel tank has its signature teardrop form known to Sportster family riders, the bike’s profile soon tapers down below the single seat in an aerodynamically sensible manner. The remainder of the rear equipment is attached to the hugger in a sport bike-like fashion, which keeps the tail tidy and sleek despite the addition of additional cutting-edge LED technology.

The Sportster S is a prime example of H-transition D’s to stressed-engine designs. Its front and rear tubular steel frame portions attach to the transmission, removing the need for most of the tube and significantly cutting down on weight. What comes out of this is a highly rigid chassis, which helps with handling precision. It’s a brand new addition to The MoCo, although the frame is ubiquitous elsewhere.

With a rake of 30 degrees and a trail of 5.8 inches, the “S” will be relatively stable at high speeds, even while encountering crosswinds and navigating pressure waves from oncoming traffic. H-D stays true to its roots by not altering the steering geometry to increase maneuverability. It would appear that good talent is sufficient.

If you weigh at least 180 pounds, you’ll be able to squat down to the appropriate height using a seat 28.9 inches off the deck. Dunlop Harley-Davidson Series radials measuring 160/70-17 up front and 180/70-16 in the rear are mounted on cast wheels.

Using tubular parts for the frame and concealing the fully-adjustable piggyback monoshock beneath the hood gives the swing arm a very sport bike-like appearance, which is something unique for a Sportster. The front end is suspended by 43 mm inverted forks on a trinity of suspension adjustments. 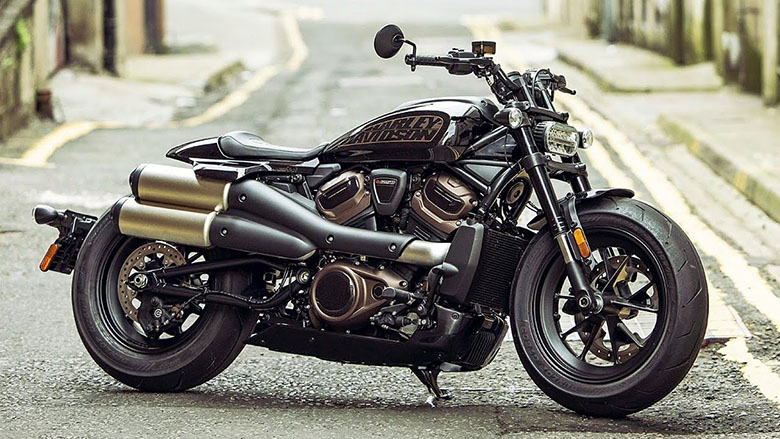 The brakes are a four-bore caliper biting a 320 mm front disc and a 260 mm disc and single-piston anchor in the back. Still, the real star is the Cornering-Enhanced Anti-lock Braking System that is standard equipment and puts the notoriously staid Motor Company on electronic par with the market’s most sporty vehicles.

Harley-Davidson continued its habit of including the cost of paint in the final price tag. An entry-level Vivid Black bundle may be purchased for $15,499 in this first look. You can add $400 to your initial investment if you decide that White Sand Pearl or Mineral Green Metallic are more your speed.

Right on the heels of a historic season in Flat Track Racing, the FTR is a street-legal version of the now-iconic race bike, sharing much of its design and layout with its racing counterpart. The rider’s triangle is also different, with the sport bike-style jockey foot pegs being the antithesis of the foot-forward Sportster S.

In terms of performance, there is little to opt between the two; the Indian V-Twin produces 120 horsepower and 87 pound-feet of torque, while the Harley-Davidson produces 120.1 horsepower and 94.0 foot-pounds of torque. All of them have fully adjustable suspension, but it appears that Indian ABS is the essential kind, and there are no advanced electronics.

Indian’s decision to sell its entry-level FTR for $12,999 (MSRP) leaves a couple of grand on the table, but if you’re into the gimmicks, H-D is your only option.