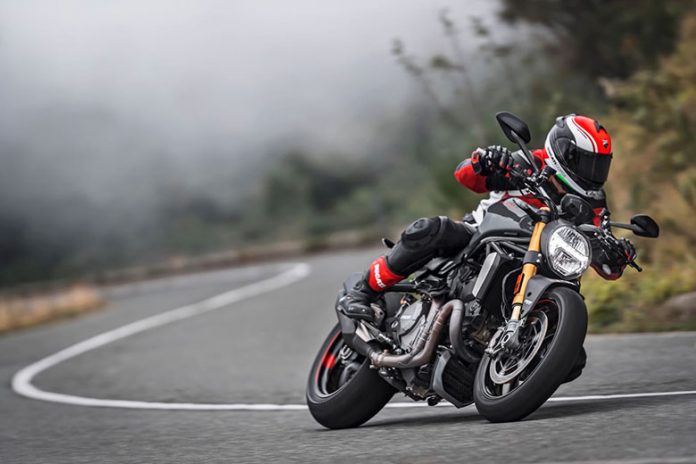 In the spirit of the original famous Monster, the 2019 Ducati Monster 1200 Naked Motorcycle has been faithfully reproduced. Ducati Traction Control, Riding Modes, Ducati Wheelie Control, Power Mode, Ride by Wire, LED Lights, and Passenger Seat Cover are all standard equipment on the Monster 1200. A biker’s dream for the last two decades, the new Monster 1200 delivers on every level. Undeniably Monster while being much more gorgeous, more technical, and unmistakably reborn as a modern sports icon. 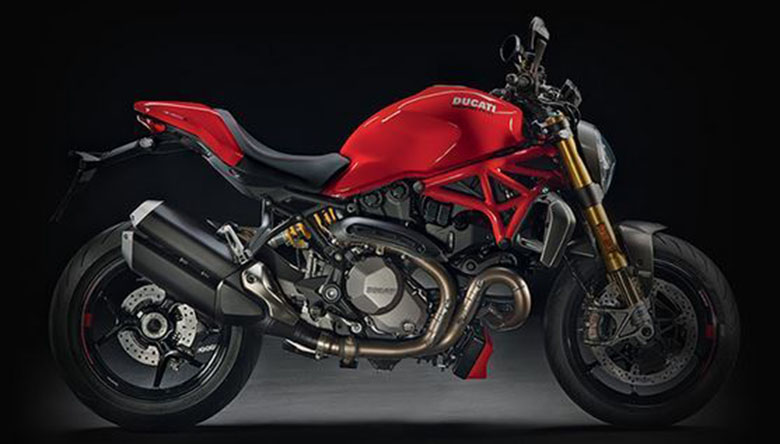 While working on the Monster 1200, the Ducati Design Center wanted to create a bike that was both small and sporty, returning to the “sport naked bike” aesthetic without drastically altering the current motorcycle’s design. As a result, the tank has undergone a complete redesign, yet it retains the spirit of Galluzzi’s original concept. The anodized aluminum attachment clip has also reappeared to emphasize this connection to the past.

Seat heights of 795 or 820 mm may still be adjusted thanks to the steel Trellis subframe supporting the bike’s small, compact, and elegant tail. Passenger footpegs are supported by the subframe, which is now separated from the rider’s footpegs by a small gap. Now, the Monster 1200 has a more athletic profile while still benefiting from this new configuration’s enhanced ergonomics.

The headlamp has long been recognized as a Monster trademark. Dual parabolas and the DRL (Day Time Running Light) have been added to this model’s new headlight for the Monster 1200 S. On the other hand, a new handlebar riser-mounted instrument panel support was developed due to this improved headlamp. There’s an overall “lighter” feel to the front end because of the indicators’ new location, which now sits beneath the top yoke rather than atop the headlamp. Additionally, the motorbike is equipped with a new set of controls. 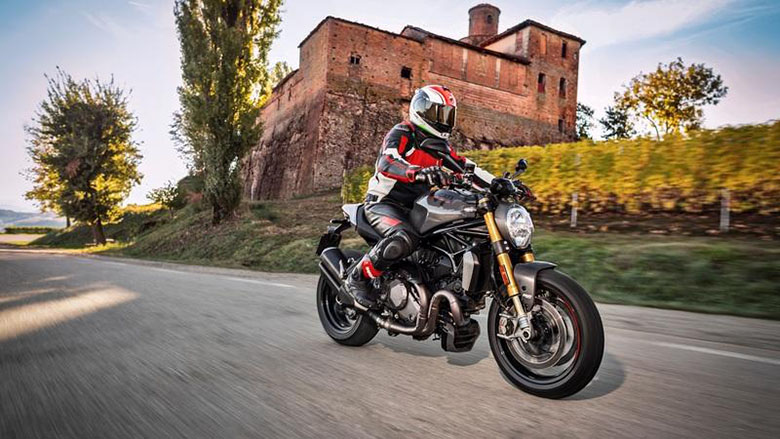 The Ducati Design Center has also made significant progress in reducing and simplifying the number of plastic components. The exhaust manifold guard has been given a more “technical” aspect, while the expansion tank cover has been reduced in size. In a side-on perspective, the frame is given more emphasis by these adjustments.

Ducati has been developing this type for more than twenty years already. A motorbike that has been reshaped and reinvented throughout time has become a favorite for customizing and personalizing and has had a significant impact on the whole motorcycle industry for well over two decades now.

The liquid-cooled Testastretta 11° DS 1198 cm3 twin-cylinder engine with four valves per cylinder powers the Monster 1200. In addition to being Euro 4-compliant, the engine has connection points on the Trellis frame, making it a structural component of the chassis set-up. A massive 150 horsepower is produced at 9,250 revolutions per minute using this engine. Ducati’s unique torque curve, which generates a maximum torque of 126.2 Nm at 7.750 rpm, is thanks to the redesigned throttle bodies and the specific exhaust.

Dual-spark ignition ensures complete combustion within an ultra-fast interval, resulting in smoother power delivery and an even more exciting ride on the 1198 Testastretta 11°DS. 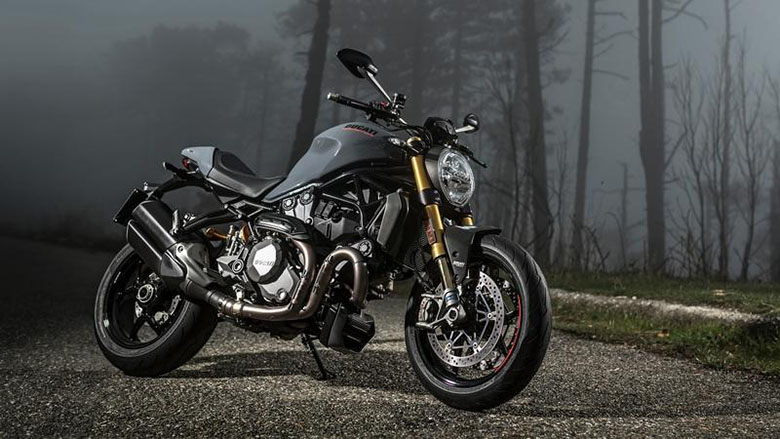 A curved radiator having two high-efficiency electric fans keeps the engine at a safe temperature.

The Monster clutch, on the other hand, is a low-effort oil bath slipper clutch. A progressive self-servo system raises the spring load automatically. Because of this, frequent gear changes (such as those seen in city traffic) and extended trips are made considerably more comfortable. To prevent the rear end from becoming unstable during vigorous downshifting, the same system lessens the pressure on the clutch discs, initiating the slipper function.

For maximum power and delivery efficiency, the exhaust ducts have a 50-52 mm cross-section and are part of a 2-1-2 system with similar lengths for both cylinders. Each cylinder has a lambda probe as part of this system, which allows for fully autonomous and optimized fueling.

First used as a production bike with Panigale’s racing-derived design on Monster 1200, the Trellis frame attaches to the engine’s cylinder heads. Oversized cross-section tubing provides the excellent torsional stiffness needed to bring out the motorcycle’s dynamic capabilities in this arrangement, which results in a small, light frame. With an all-new swingarm and a 1,485 mm wheelbase, the Monster 1200 is even more impressive than its predecessor. 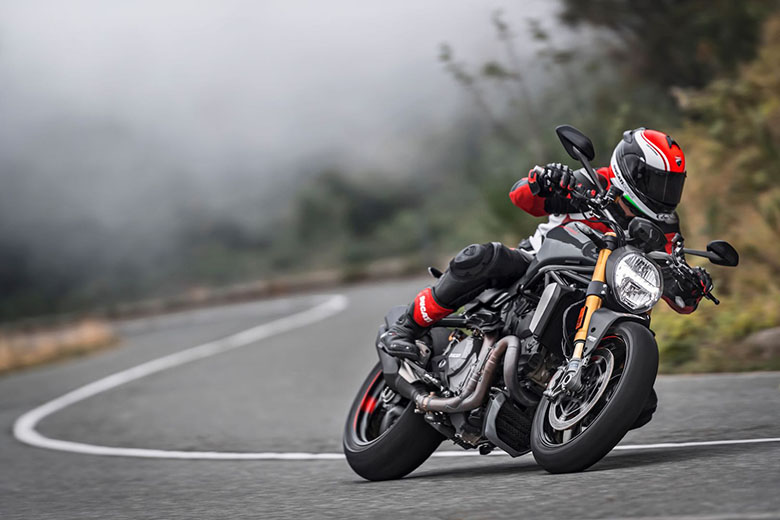 New footpeg struts are additionally supported by a revised rear seat-carrying subframe, which is connected directly to the engine. Sport-style riding necessitates pegs that are distinct from the rider’s feet to have more mobility. Die-cast aluminum footpeg attachments put aluminum pegs on both the rider’s and passenger’s sides. To emphasize its sporting heritage even further, the Monster is equipped with aluminum heel protection for the rider’s feet.

Alloy wheels on the Monster 1200 and the Monster 1200 S have received better additional machining than those on the Monster 1200, which feature 10-spoke Panigale type alloy wheels. Other “S” graphics may be seen on the wheels of the S variant to emphasize the vehicle’s racing nature. A pair of 120/70 Pirelli DIABLO ROSSO III dual-compound tires, mounted at the front and rear, ensure that even in aggressive cornering, there is no loss of grip. Pirelli Enhanced Patch Technology (EPT) and Functional Groove Design (FGD) maximize contact patch area regardless of lean angle in these high-quality tires.

Compared to the Panigale, the Monster 1200 boasts Brembo M4.32 monobloc 4-piston radial calipers with 320 mm discs, while the Monster 1200 S gets Brembo M50 monobloc calipers with 330 mm discs. Both versions use radial pumps with separate reservoirs; the rear brakes use a single 245 mm disc and a Brembo caliper with sintered brake pads for improved efficiency. These parts provide excellent braking performance, which has long been a trademark of Ducati’s. 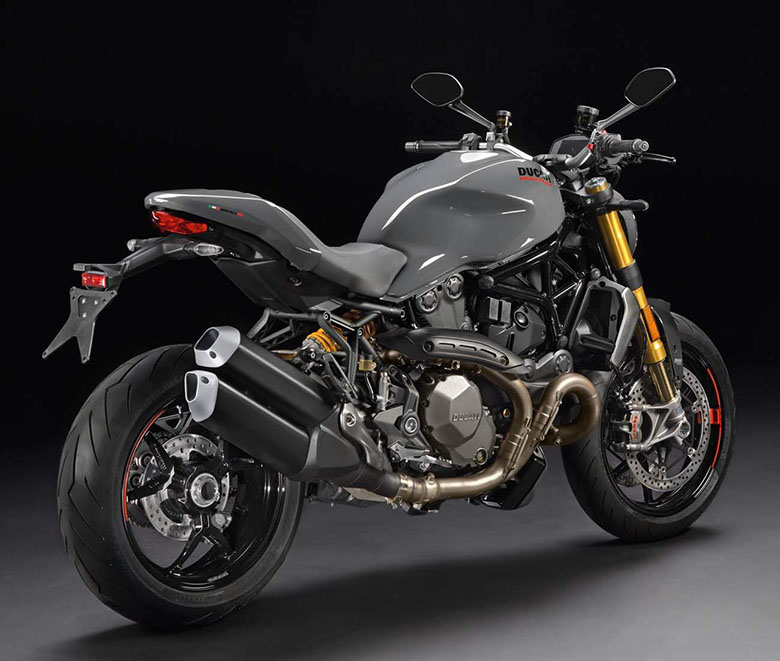