That has been more than one year that one speaks about it, and we even could discover it at the last convention of the Piaggio group. But at few days of the living room of Milan, here finally comes the first official and final photographs of Moto Guzzi California 1400 2013 in touring version. True road typified a cruiser which announces the great return of a legend of the motor bike. 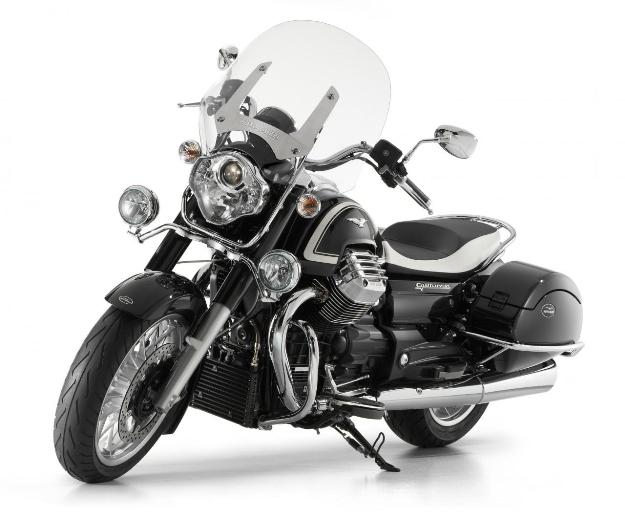 Our wire of topicality always covered the announcements concerning the news Moto Guzzi California 1400. This true innovation illustrates the determination of Mandello to be rebounded after years without real mess, in spite of creditable efforts on models like Stelvio 1200, Norge, even the evolution of the V7 range to a lesser extent. With Moto Guzzi California 1400 2013, the Italian eagle turns to the future: the motorization of the mega cruiser will undoubtedly be brought to equip with other models in the future.

As we already saw, Moto Guzzi California 1400 2013 rests on all new technical bases. New, the large transverse twin-cylinder respects the tradition house. This new whole twin raises splendid cylinder heads to the lids carved in neat chromium. Pointing towards the sky, solid wings appear, confirming the maintenance of cooling by air, this time reinforced by an oil radiator placed just behind the nose gear wheel.
The Touring version of California 2013 revealed this morning, that it has a mudguard before prolonged seeming which well to protect this radiator. Remain to see how the version Custom, also envisaged with the catalog Moto Guzzi 2013 will be equipped. 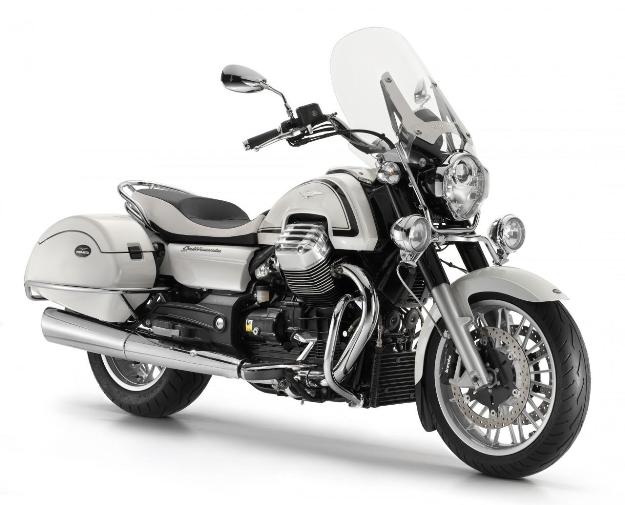 Moto Guzzi announces to have re-examined, of the general pace of the motor bike! – With these internal elements, until the final transmission by gimbals joint and limps six speeds. If the travel of the pistons remains similar so that one knows in the current block 1200, boring spends this time to 104 mm. The collapsed distribution preserves a single four valve but camshaft per cylinder. The injection single- is signed magnets Marelli.
The wrinkle by wire is given the responsibility as well as possible to manage acceleration, consumption and various modern tools, including three mappings or programmed cartographic of injection: touring, sport and wet. These three modes of control modify the couple, the answer of mechanics as well as the engine brake.
The electronic accelerator allows the adoption of a speed regulator, very simple to use according to the manufacturer, as well as the anti-skid one. This Moto Guzzi Control Traction will be adjustable on three levels, independent of the modes of control, to avoid the evasions of the aft wheel subjected to the couple more than to improve the performances.
This Moto Guzzi California 1400 2013 new generation is obviously designed for the amateurs of tourism and cruising, as also these values of power and couple attest some: count on 96 ch. with 6,500 tr/min for a couple – especially! – of 12 daN.m with 2,750 tr/min. Promising for the fans of kick to C… 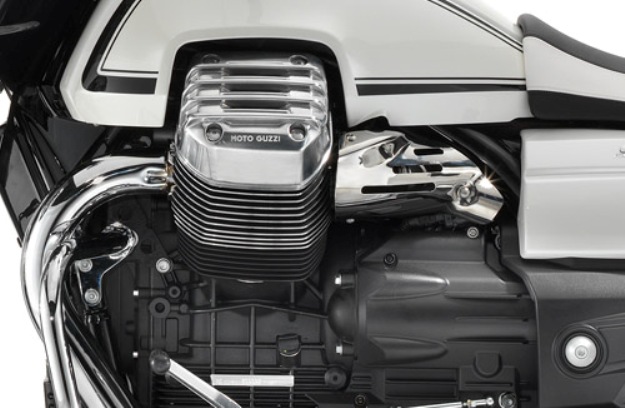 In the Touring version, Moto Guzzi California 1400 2013 takes a pretty form of cruiser to the long course, magnified by the side bags, the large windshield and additional fires. This line was not obtained to the detriment of the requests engineers’ frame who completely reconsidered the flexible assembly of the engine within the framework. This last, conceived out of steel, was drawn in order to let diffuse the vibrations of the engine only in the phase of idle.
As of the first millimeters of opening of the accelerator, these vibrations would be erased appreciably, Moto Guzzi California 1400 announcing a balance hitherto a dernier $c-b1, e, 10 $c-b26 this $c-b16 $c-b43, 84 unknown on the models of the mark. One is in a hurry to test that! Let us hope that the famous torque reaction will remain perceptible, this would be only for the identification of this mechanical architecture.
In addition, the center of gravity is placed low possible, with the image of the saddle located at 740 mm of the ground. The lengthened footing of 1,685 mm forecasts a directional stability worthy of the preceding generations of California. 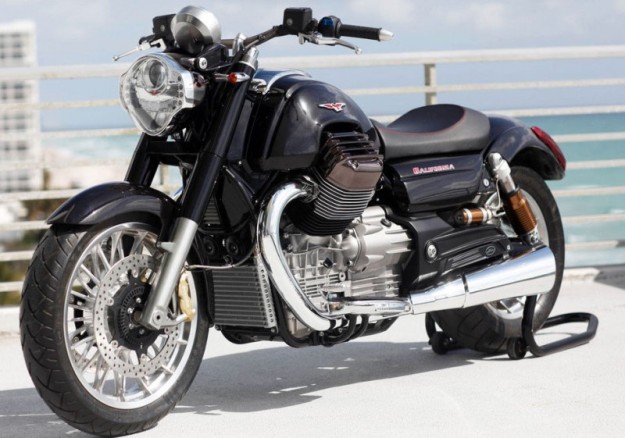 The traveling trains call on components naturally being more modern: ultra light alloy wheels with the refined sticks and massive aft wheel fitting an impressive pneumatic tire of 200/60 X 16 inches. The fork 46 mms in diameter or the two shock absorbers back announces a capacity to support the load.
More astonishing, Moto Guzzi chose to draw a feature over thirty years of technology from integral braking to the profit from an ABS system signed Brembo.
Moto Guzzi California 1400 2013 thus announces a new departure for the trans alpine manufacturer. Nevertheless, this very new motor bike will always be assembled in the emblematic factory bordering the lake of Like, although it was question, on several occasions, localizing the assembly of Moto Guzzi in a more modern factory of the group Piaggio, owner of the mark. Moto Guzzi announces that the various versions of California 1400, Custom or Touring, will be always assembled entirely with the hand. The past is reinvented. 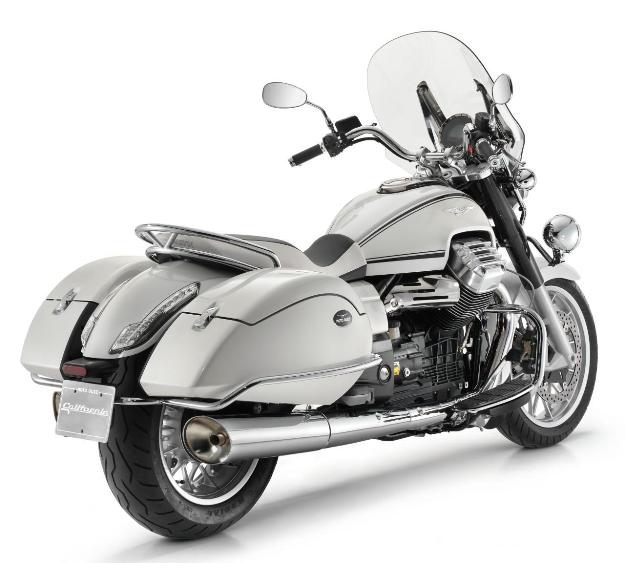