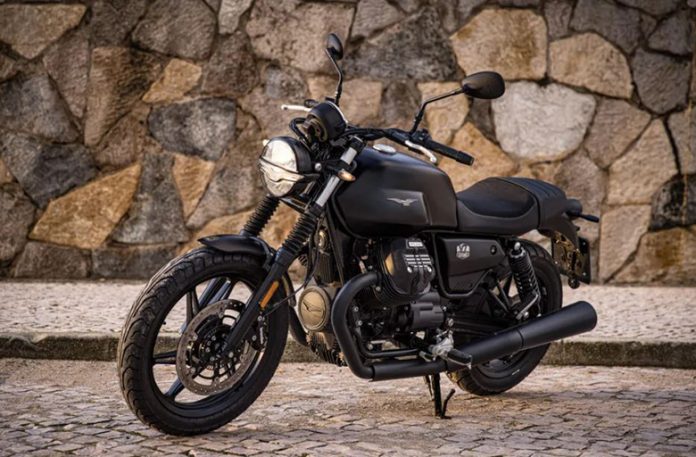 Moto Guzzi completely redesigned their V7 platform, which resulted in a naming change that did away with Roman numerals. The ABS and traction control system is ready to go thanks to a redesigned chassis, which incorporates an upgraded powertrain on top of new suspension components. Alongside the Centenario, which will be produced in limited numbers for 2022 only, comes the brand-new Moto Guzzi 2022 V7 Stone Classic Street Motorcycle. 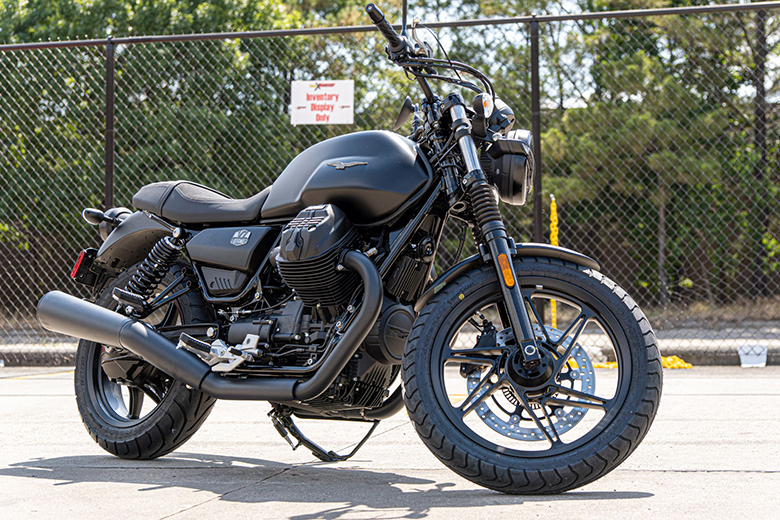 The motorcycle is powered by MG’s trademark transversely-mounted V-twin engines are easily distinguished from the competition. The latest V7 Stone generation is no different. The new “Eight-Fifty” operates on a bore of 84 mm and a stroke of 77 mm, increasing the engine’s displacement to 853 ccs and making it compliant with Euro 5 emissions requirements.

It also results in a 25 percent increase in power, along with a minor increase in torque. The Moto Guzzi Stone V7 has an 850 engine, good for 65 hp and 53.8 lb-ft of torque.

It is an increase over the previous model’s 52/44 split, and the manufacturer claims that over 80% of the engine’s maximum torque is accessible by the 3,000 rpm level. It is hardly unexpected, given that V-twin engines, such as the V7, are often relatively torquey. If you’re a rider in the UK and working your way up the tiered licensing system, you can get an A2-compliant version.

With a deep-sump oil collector and two oil pumps, the new and improved cases maintain pressure and excellent recovery even at extreme lean angles. The lightweight simplicity of the top ends is a result of the pushrod and rocker type valvetrain that times two poppets per head and the use of many aluminum components.

The weight of the pistons and the wrist pins has also been carefully considered. Pins of a 20 mm diameter were used to lessen the importance of the mechanism’s reciprocating parts.

The V7 Stone’s maximum speed of 110 mph is achieved by routing the engine’s output via a clutch and a six-speed gearbox before sending it to the rear wheels with a double-jointed driveshaft. You have some say over the safety gear thanks to traction control that can be toggled between two intervention levels and “Off.”

Regarding the design, the only real distinction between the Stone and the Centenario is a matter of personal choice in terms of color. In terms of general construction, all of them are the same. Both have a lot of blacked-out detailing, but the Stone may be had with black, copper, yellow, or gray shots on the tank and front fender. 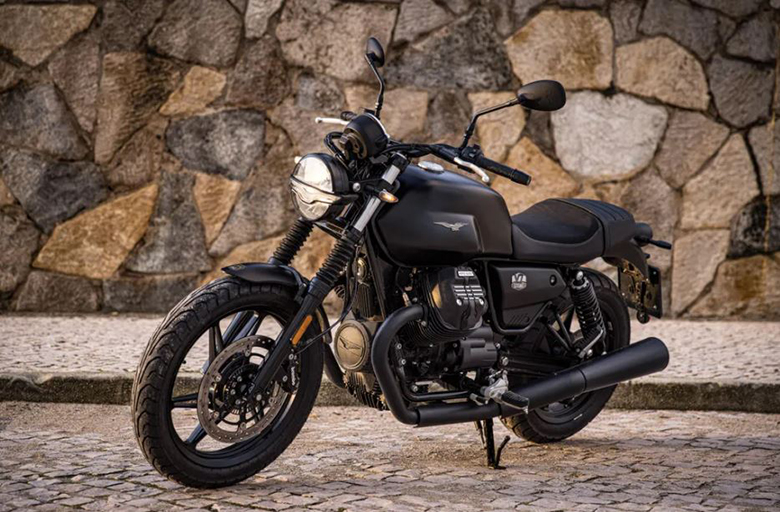 The Centenario’s front fender and side covers are green, the tank is gray, and the seat is brown rather than black. The high and low-beam LED projectors are housed in a single, spherical headlamp housing. There is also a daytime running light (DRL) system in the form of an eagle for added visibility throughout the day.

The new digital display, housed in a circular enclosure, is the rider’s point of contact with the safety systems. It utilizes your phone as the conduit to the Moto Guzzi MIA service. Drawing inspiration from its ancestors, the 5.5-gallon fuel tank features small head-shed outcroppings that are meant to visually fair off the swelling engine tops.

The gasoline tank squeezes the back into a tiny, thin waist. You may prop up your passenger on the narrow entrance of the two-up seat, which mimics a tuck-and-roll pad, and the set is rounded off with subframe-mounted, flip-up footpegs.

The equipment is attached to the back of the vehicle using a blackout rear fender, and the license plate is employed to further the concealment. The Stone E5 keeps the traditional styling of the V7 series while boasting several upgrades beneath the hood.

The V7 Stone has a double-downtube/double-cradle tubular frame made of ALS steel. The final driving shaft is housed in a new, bigger swingarm designed like a yoke. The cast wheels finish off the moving chassis. They have a street tread pattern and are lined with a 100/90-18 in front of a 150/70-17.

With a wet weight of fewer than 500 pounds, you might get away with merely using the front brake. Most of the stopping force came from a 320 mm disc and a Brembo caliper with four bores and opposed pistons. The 260 mm disc and twin-cylinder anchor come next. 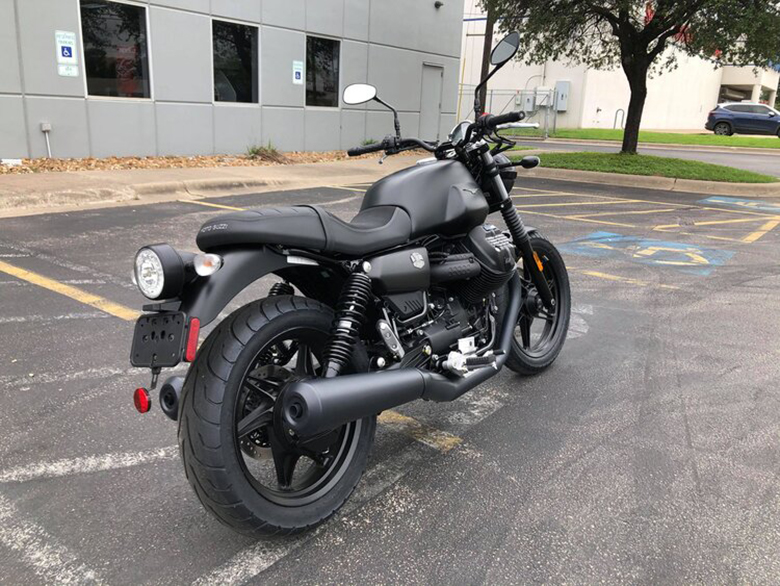 The front end is suspended by a plain vanilla suspension on 40 mm pipes. To fine-tune the ride height, you may change the preload on the rear coil-over shocks. All of the electronics are rounded off by standard ABS protection.

You’ll be charged the same amount of money whether you choose the black or white version. The starting price for the 2022 Moto Guzzi V7 Stone is $8,990. The Centenario, a special edition that will disappear after 2021, will set you back $9,190.

The Iron 883, a Sportster, has an air of confidence similar to its Italian inspiration. The classic/cruiser atmosphere permeates every inch.

Blackout therapy initiates a link to the conventional world, like the Stone but to a greater extent. Front fender uprights and belt guard were drilled for weight reduction.

The Sporty’s front end has a single round headlamp in addition to a circular instrument cluster. The new license plate holder is moved to the left side of the trunk for a more streamlined appearance. There is a modest but functional taillight bar mounted on the reduced rear fender, which does not detract from the overall sleek appearance.

The H-D falls short if you and a companion prefer to enjoy the ride together since it only has one saddle and no passenger footrests. After the sale, you’ll have to spend money, but with the Stone, you won’t have to worry about it.

Harley advertises 54 lb-ft of torque, and the engine is a tried and true design. This generation of Sportster motors has been around since 1986, and it has shown to be a solid performer ever since. 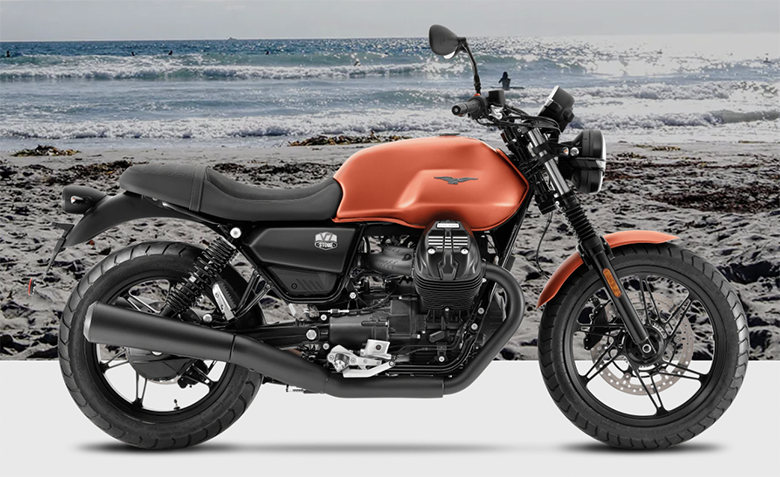 The Moto Guzzi has a massive edge at the register because of its superior lineage, but you’ll have to shell out $11,249 to get your hands on one. Traction control is included on the ‘Guzzi, but H-D doesn’t have an equivalent, and ABS costs an extra $819. 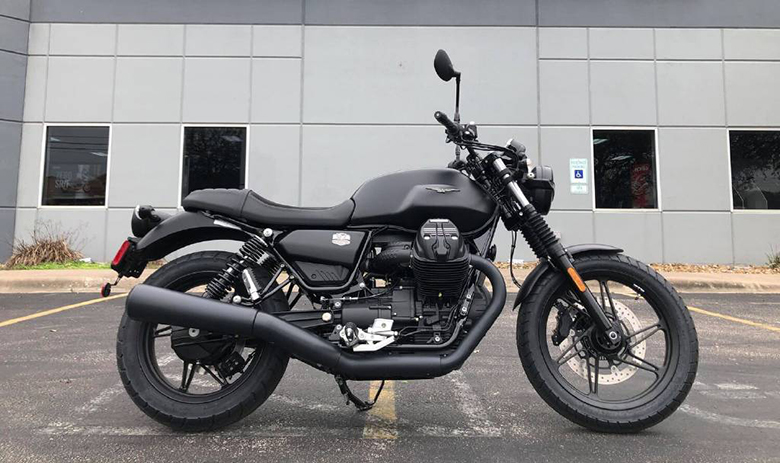