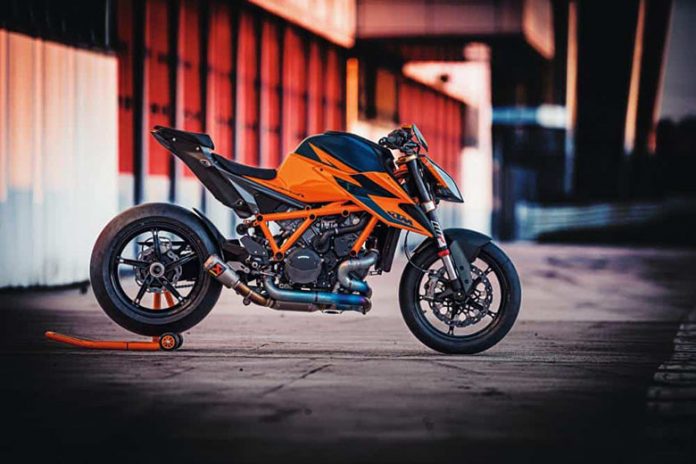 An all-new KTM 2021 1290 Super Duke R Sports Bike is now a more intimidating hyper-naked machine than before it lost its skin. The legendary 75-degree, 1301-cc LC8 V-Twin engine, now housed on a brand-new chassis, powers THE BEAST to new heights.

The KTM 2021 1290 Super Duke R Sports Bike has been reworked to make it leaner, meaner, and downright terrifying. It’s not a stripped-down sports bike on this one. The BEAST was built from the ground up to be an extreme naked bike. The 1,301 cubic centimeters of its naked splendor are freely shown in their glory, unabashedly raw.

With a subtle two-finger salute to the competition, the famed V-twin engine that powers THE BEAST has received a few modifications. The more extensive diameter exhaust system means that none of the unprecedented savagery or V-twin scream has been lost due to the addition of more top feeder injectors in the airbox. 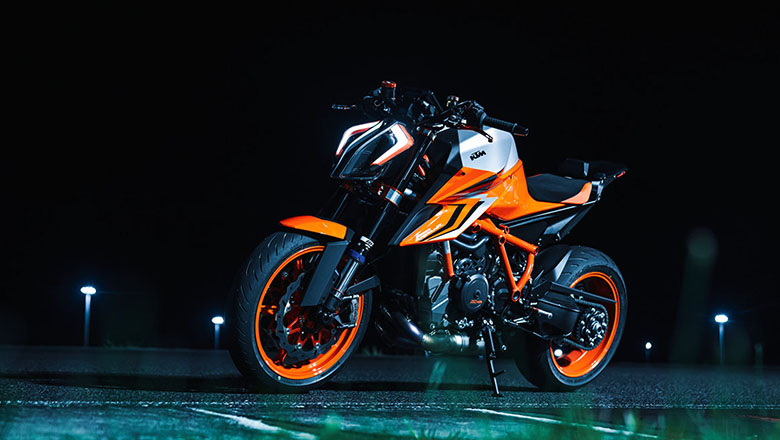 The KTM 1290 SUPER DUKE R has to be able to exhale like a BEAST if it wants to perform like one. This rip-snorting setup increases airflow into a brand new CFD optimized airbox with smaller resonator chambers thanks to a brand new ram-air intake located in the new headlight mast. By driving air into the combustion chambers, this design increases flow. As a result, the risk of low air pressure is reduced, and the pace at which fuel is burned rises. To further simplify maintenance, a newly designed air filter box has been included.

Don’t try to fix something that isn’t broken. But don’t be afraid to ratchet it up a notch! Subtle but significant changes have been made to the 1301 cc V-Twin LC8. When it comes to V-twin progression, this powerhouse is the pinnacle of lightness and torque. New engine and linkage mounts contribute to the overall package’s structure, making it the portion that holds THE BEAST together.

A 0.8 kg (1.7 lb) weight reduction has been achieved by using thinner engine casings and new water and oil cooler mounts. A lightweight aluminum oil line, which eliminates the requirement for a double wall system, has also increased oil delivery. Stiffer connections are made possible by integrating the engine carrier bracket and linkage mount into the engine case. Consequently, the swingarm pivot is now 5 millimeters higher, enhancing stability and anti-squat.

The KTM 2021 1290 Super Duke R Sports Bike’s Ride-by-Wire system goes the additional mile. The rider’s throttle inputs are electronically translated into the optimal throttle valve locations for the present riding circumstances. Involuntary wheelies, choking, and jolting are things of the past. Voluntary ones, on the other hand, might be a reality shortly for you.

If “bark is worse than bite,” this BEAST roars! Two catalytic converters reduce pollutants without sacrificing the V-twin engine’s sound or horsepower, while up to 60mm of drainpipe-like dimensions at the headers improve gas flow.

The new KTM 2021 1290 Super Duke R Sports Bike is three times stiffer than its predecessor, thanks to an innovative frame design that incorporates the engine to boost torsional stiffness. When you can ride with ease and self-assurance, you’re on your way to a speedier ride. Maximizing input from the chassis and front tire is the key to achieving this goal. To further reduce weight, the bike’s frame has more giant diameter tubes with thinner walls, a feature that saves 2 kg over the previous generation.

When it comes to this BEAST’s tail, multi-dexterity is king. All-new and lighter composite sub-frame combine a variety of roles to conserve weight and enhance performance. Without any extra brackets or attachments, the passenger seat, license plate holder, and taillights are all attached to the sub-frame directly. 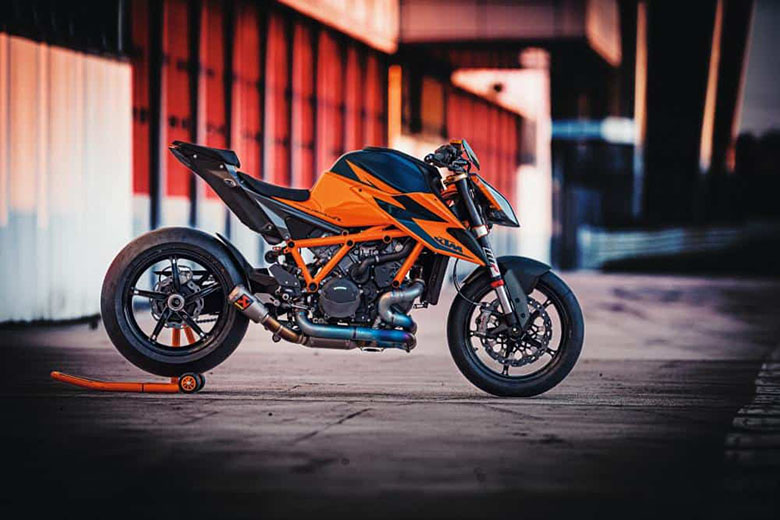 It has been moved 5mm higher concerning the output sprocket so that the rider can feel and handle the bike better while putting the power down. Increased anti-squat has been obtained by relocating the engine in the frame.

The suspension components on THE BEAST serve as the vehicle’s muscles, ensuring that the vehicle’s maximum power is delivered to the ground in the most efficient manner possible. To enhance maneuverability, adaptability, and performance, each component has been meticulously scrutinized.

WP APEX forks have split function compression and entirely customizable rebound settings. It enables riders to fine-tune the front end for full-blown apex assaults or achieve optimum plushness for extended hours of driving. Adjustable preload adjustments allow you to find the perfect front-end posture if that isn’t enough to get you to the cutting edge of handling.

A refined CAD technology, rather than a designer’s pen, determined the ideal form for these wheels in terms of strength and lightweight. As a result of meticulous engineering, these wheels are lighter and more stylish than ever.

Brand-new KTM 2021 1290 Super Duke R Sports Bike tires, sized 120/70/17 up front and 200/55/17 out back, are made exclusively for this bike. A fine-particle silica component improves traction in wet weather situations, resulting in remarkable road and track qualities, respectively.

Large lean angles are expected due to the foot pegs’ thoughtful placement, contributing to the vehicle’s overall comfort. For a more aggressive posture, however, two more options raise the pegs higher and farther rearward. If the rider wants to go full Beast Mode track assaults, just change the gear shift pattern to a five-down configuration. Both the shift and brake levers may be moved to any position. 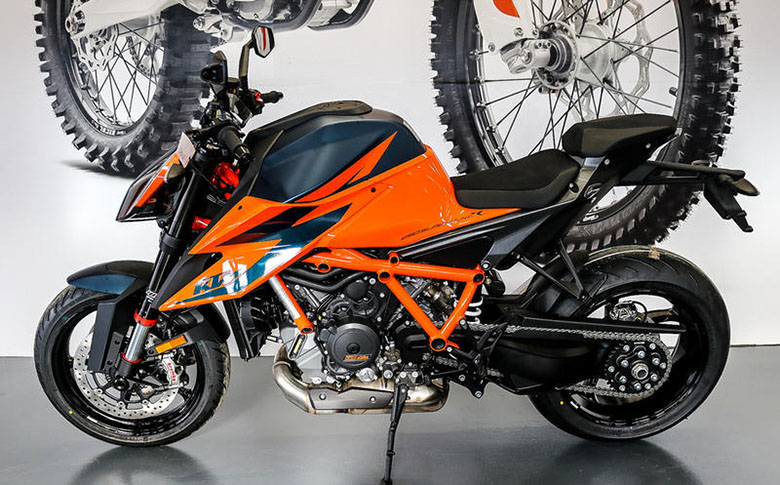 With a 760 mm broad handlebar, finding the perfect sitting position is a cinch. Four positions over 21 mm, from front to back, let riders choose their optimum reach for aggressive corners and hold on down the straights.

THE BEAST’s track record as a live performer is unquestionable. However, it doesn’t imply that long-distance comfort is sacrificed. A street bike first and foremost, the KTM 1290 SUPER DUKE R excels on the racetrack. Passenger comfort has been meticulously planned and developed to allow real-world, two-up riding.

There’s no arguing that this is the nastiest bike on the street. The new KTM 2021 1290 Super Duke R Sports Bike muscled creases are superbly highlighted by contrasting colors, tones, and textures, all of which were applied high-quality.

The new KTM 2021 1290 Super Duke R Sports Bike’s bodywork doesn’t have much to say since there is so little of it to discuss. It’s perfect for us, however! The aggressive and frightening bodywork and panels have to meet two goals: meet all ergonomic requirements and reduce weight as much as feasible. The thickness of each panel and plate has thus been determined to the best of its ability to minimize waste and maximize efficiency. The attitude was the only thing that weighed you down.

The 16-liter (4.2-gallon) steel fuel tank was custom-made to add mass to THE BEAST’s thighs. It has also been developed primarily to assist the rider on the street and the track due to the revised form and angle of the frame.

As an intake snorkel, the all-new headlight mask’s LED headlights flash the brightest. With its threatening lines, THE BEAST’s overall appearance is further enhanced. It increases your street cred, but also makes you more apparent to other road users since you’ll be more visible in the daytime.

Angle-adjustable 5-inch TFT screen in front of the rider has a modern look and new functionality. Riders will like the new menu layout, making it easier to find and customize their favorite riding configurations. Glare is reduced thanks to the display’s bonded glass, scratch-resistant. 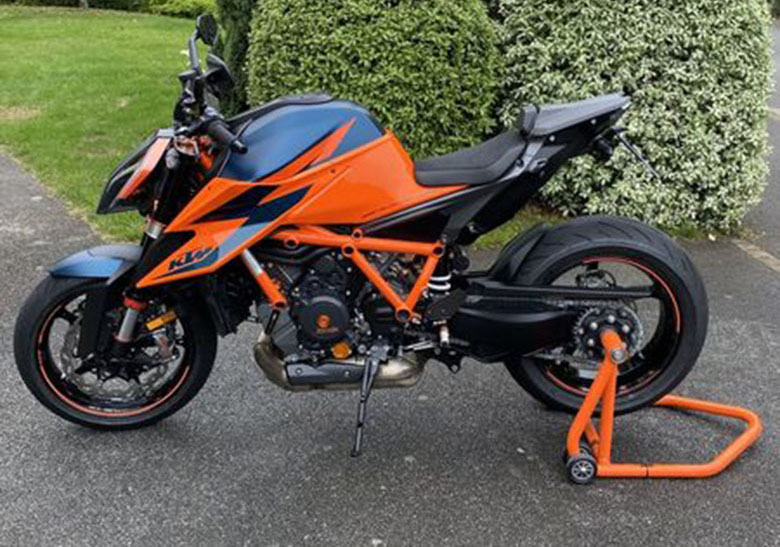