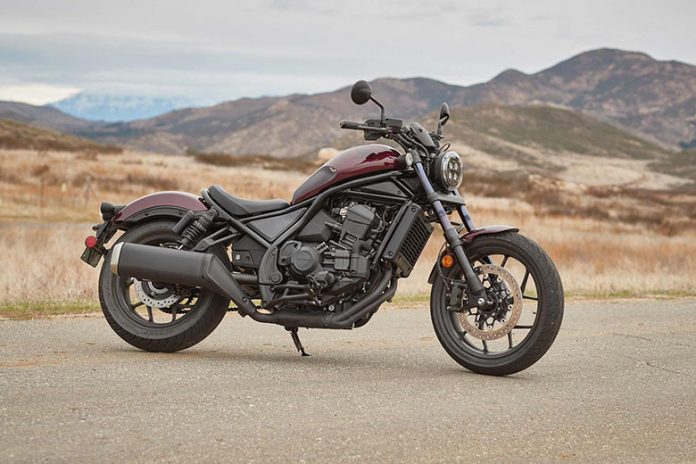 Enter the all-new Honda 2021 Rebel 1100 Powerful Cruisers, a mid-size cruiser with a modern design built for today’s cruiser rider. It is a high-functioning motorcycle that only Honda can design and build, ready to transport riders to activities while providing unforgettable sensations. It feels and sounds unlike anything else on the road.

This flexible vehicle is built with the ambitious “Relax and Excite” design philosophy. It’s unpolished yet functional, basic yet contemporary, and equally effective in traditional unhurried “cruising” and adrenaline-fuelled adventures defined by high speeds and thrilling turns. This motorcycle offers new technology to the cruiser industry. It is characterized by clean, profound aesthetics and is powered by a modified version of the Africa Twin’s high-performance, water-cooled parallel-twin engine.

The bike performs exceptionally well in acceleration and cornering, mainly due to its meticulously designed geometry, sport-worthy components, and best-in-class power-to-weight ratio. From. It also offers a premium finish, Honda’s legendary dependability, a distinctive, deep, pulsating exhaust note, and an incredibly affordable price. 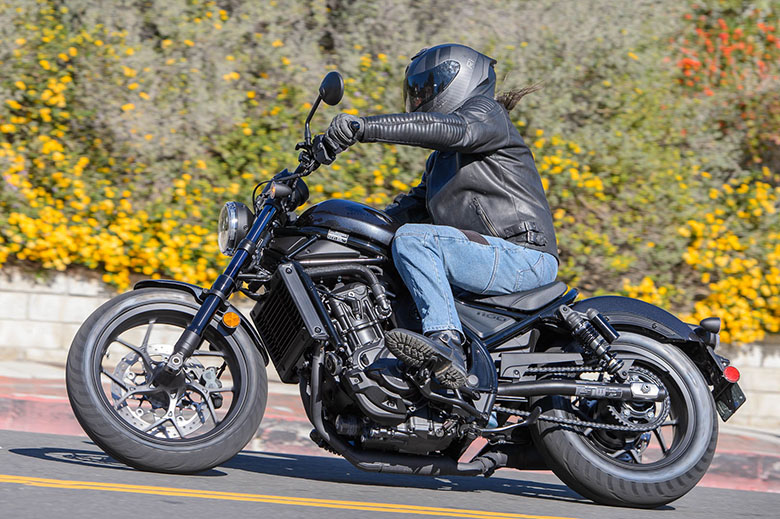 A modern cruiser can and should be redefined by the engine found in the Rebel 1100. You’ll have considerably less power, as our Africa Twin demonstrated, but the Rebel 1100 rides smoothly and revs more than any other bike in its class.

The Rebel 1100’s compact cylinder head and ideal engine placement are made possible by Honda’s proprietary Unicam® engine architecture. The entire cylinder head design, though, also gives the engine better performance. The best of both worlds is here!

For each of the two cylinders in the Rebel 1100, we use a different camshaft profile and ignition timing. Why? Below 4000 rpm, one cylinder produces slightly more power than the other, and vice versa. You’ll love the distinct power pulse and feel the 270-degree crankshaft has. Additionally, compared to some more “traditional” cruisers, the Rebel 1100 produces significantly more power (about 50% more). 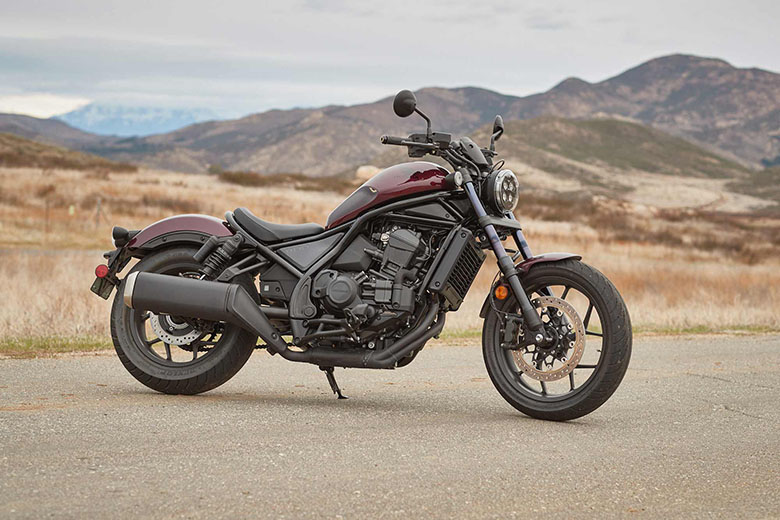 When you own a bike like the new Rebel 1100, you want to go for a ride. For this reason, we gave it cruise control, much like our Goldwings. Want to relax and spend the entire weekend driving? No problem!

The Rebel 1100 has a standard six-speed manual transmission with a clutch lever mounted on the handlebars. It’s a tried, durable design that also makes the bike lighter.

Many modern bikes look great while riding or cruising but fall short on winding roads. Honda sets high standards for how all its motorcycles handle and feel, and the Rebel 1100 is a prime example. We thought about the bike’s stunning looks as much as we did when designing its handling and cornering.

The Rebel 1100 provides a solid foundation for outstanding handling by placing heavy components such as the crankshaft low and close to the bike’s center of gravity and adopting a compact engine design.

Due to the notoriously bulky nature of traditional batteries, we equipped the Rebel 1100 with a state-of-the-art, lightweight lithium-ion battery, similar to the ones on our most giant sport bikes. It has a shelf life of 1.6 times longer and lasts almost four times longer than a lead-acid battery. And it’s very light.

The Rebel 1100’s frame is key to both the bike’s excellent handling and its distinctive design. The swingarm pivot and steering head rails tie in with a striking diagonal theme line in design.

The Rebel 1100 features front and lower cast wheels that are lightweight, practical, and easy to keep clean, giving it a built-in classic flair. The motorcycle looks better because of its wide rims and tires.

The Rebel 1100’s front brake caliper is positioned for solid stopping force. It’s also strengthened by a radial-mount design, which improves brake feel and control and holds a single, huge 330mm disc. A 256 mm disc is also included at the rear for excellent stopping power. 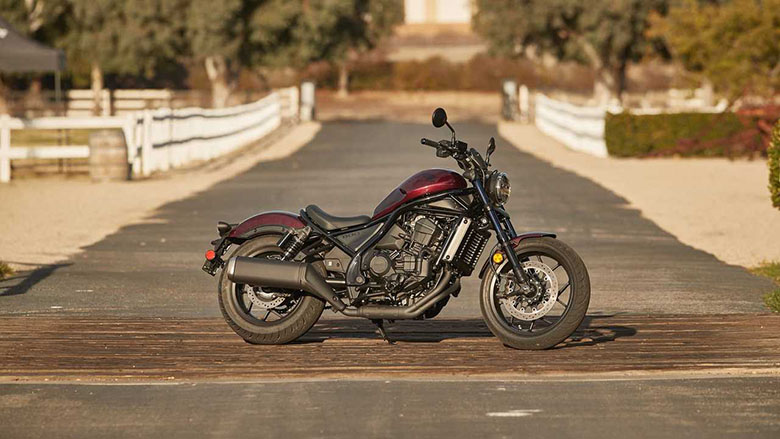 The Rebel 1100s is equipped with Honda’s latest anti-lock braking system. It is a fantastic feature that can help you make controlled stops while riding in the city, in the rain or in less-than-ideal conditions on unfamiliar roads. It is a feature that everyone can enjoy on a bike like this.

The Rebel 1100 has front, and rear wheel speed sensors integrated with Honda Selectable Torque Control, just like our high-tech CBR1000RR-R Fireblade (HSTC). You can select one of the three-wheel control settings using the system. The Rebel 1100 is not as low-tech as some other cruisers.

USB-C terminal Inside the Seat

We’ve included a handy under-seat USB-C socket because we know you’ll want to power up your gadgets or use accessories like a navigational aid when riding.

With its low, fat 16-inch 180/65 rear tire, the Rebel’s stance and seat height are both low while still giving you plenty of traction. It also seems harsh.

The wider 130/70-18 front tire on the Rebel 1100 contributes to the bike’s excellent aesthetics and handling, and stopping power.

Since its launch in 2017, Honda’s new cruiser weight Rebels has been enormously successful. Although Honda has had the Rebel moniker as part of its inventory in the United States since the early 1980s, these bikes were sub-500cc models primarily used as entry bikes and trainers. Eighty-eight percent of Rebel 500 owners traded their motorcycles for larger vehicles within 18 months. Only 27% of these buyers went on to purchase from Honda.

They claim that inventions are born out of necessity. Honda looked to the shop for a torque monster that could do the job because they knew their top-of-the-line Rebel needed a large-displacement engine. While it may have discovered the 1084cc parallel twin in an unlikely place—in the big-bore Africa Twin, to be exact—the engine seemed ideal for the job to Honda’s engineers.

Honda realized that their engine, the largest in the history of adventure bikes, is solid and torquey enough to perform well in various market segments.

The significant, high-strung Adventure powertrain has been tweaked somewhat to produce more street thunder with a few adjustments, including a 20 percent heavier flywheel, updated timing, electronic massaging, and a custom exhaust arrangement. The Rebel 1100, which claims 87 horsepower and 72 pound-feet of torque, is faster and lighter than either American V-twin, coming within a hair’s breadth of Harley’s Iron 1200 and the Indian Scout Sixty. 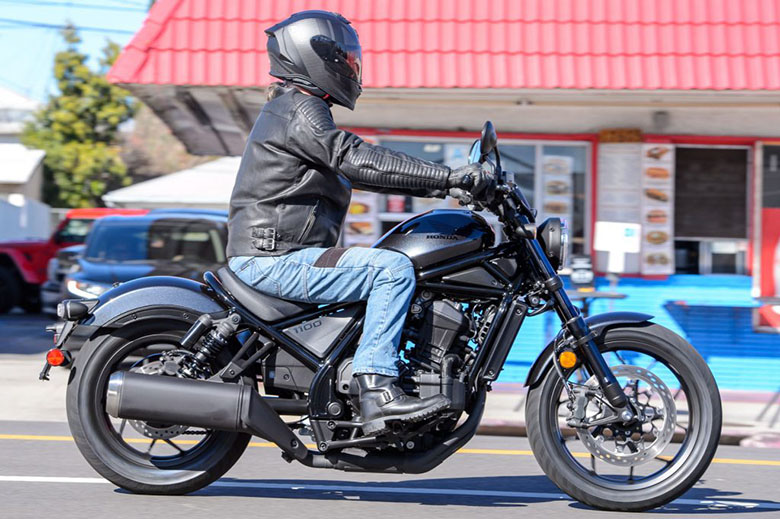 How much light, you ask? Less than 500 pounds! The dual-clutch (yes, there’s a DCT!) adds about twenty pounds to the six-speed manual model’s curb weight of 487 pounds.

It’s immediately apparent where this bike’s strength lies when you consider that it’s 50 to 70 lbs lighter than anything else in the segment. The bike isn’t the machine you drag on your knees, with a wide seat, a clunky foot pedal and a low-slung personality. It feels light enough to get around a canyon road without slowing down, but it’ll scrape the pegs with the best of them. It’s not a sports bike, but it might be the closest you can get to an authentically old American look.

The rest of the bike’s ergonomics impressed me. The forward controls are in a good location next to the easily accessible rear brake lever and are not too far from the handlebars. Typical of Honda, nothing was out of order. The bike is also low enough to the ground that I found it easy to reach standover height. To give your back a chance to restore blood flow, you need to be flat-footed and able to stand up while riding this bike. 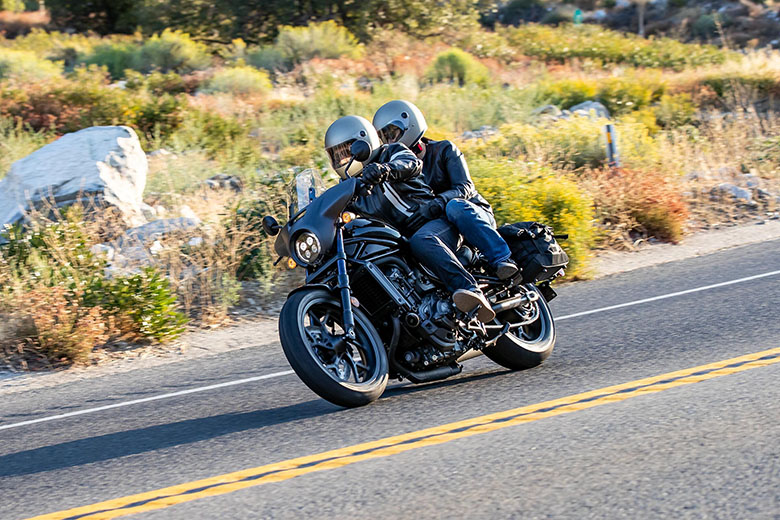