Among the many essential features of the 2022 Harley-Davidson Iron 883 Cruisers, performance is one that Harley-Davidson has not compromised on. XL models may not have a reputation for “speed” that other motorcycles have, but they have earned the label of “quick” motorcycle. The Iron 883 is a proud continuation of the Sporty history of handling corners and getting out of the hole faster than any other Harley-Davidson. These bikes show that the XL line has not only persisted but thrived in the budget and performance cycling markets in the United States.

When the K-model, the progenitor of the XL, or Sportster series, was introduced by Harley-Davidson in 1952, the company’s workers probably had no clue they were creating a genre that would continue to flourish more than 50 years later. The 2022 Sportster Iron 883, however, is more of a tribute to the individual touches that individual owners have made to their bikes over time than the original design. 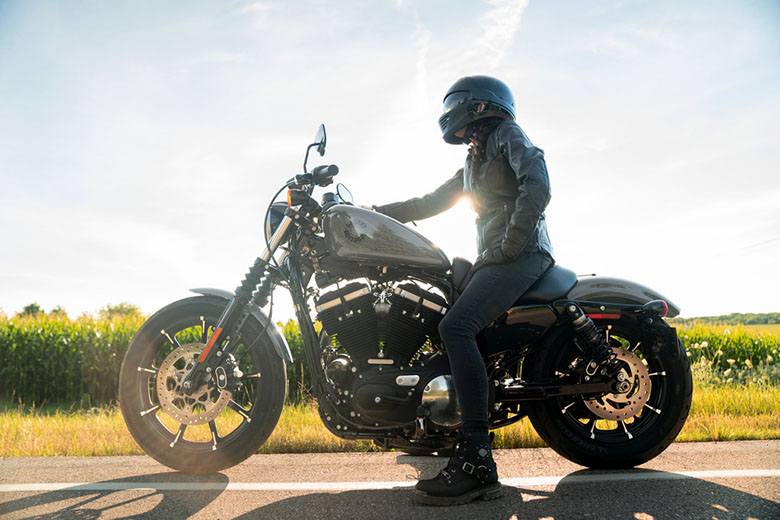 Overall, the Iron 883 exudes an intense drag-centric atmosphere that is hard to ignore. The combination of the drag bars and the mid-mount controls creates an aggressive rider triangle that tilts the rider slightly forward, allowing for more confident cornering.

The lines are considerably curled up to fit inside the 85.8-inch overall length characteristic of the Sportster series. The gasoline tank is a modern take on the classic peanut-tank style seen on the Sporty, with an additional gallon or two of capacity. Despite their obvious visual appeal, peanut tanks cannot hold sufficient gasoline.

An average stock Sportster seat is made more comfortable than a smooth Sporty seat by directing a little flow through the rolled leather and down the tank, which is controlled by the top lines. The dragster’s appearance is improved by the exposed tire, made more visible by the shaved back fender.

LEDs are used for both the front and back turn signals to make the devices compact and inconspicuous. The taillight has a low profile when turned off, making it seem more like a strut reflector. Mounted on the left side, the license plate holder not only maintains the fender tidy and the top line uncluttered but also gives the Iron 883 the appearance of a custom bike that has already been worked on.

Harley went all out with the blacked-out look. Pushrod tubes, fork tubes (but not lowers), spoke tips, and engine cover fasteners were the only motorcycle components left in pristine condition. Paradoxically, the personalized look’s seeming lack of frills is a frill in and of itself, yet it helps create that look anyway.

In 2017, a battery tender harness became standard equipment, which is great if you’re one of the unlucky individuals who has to put your bike in storage for part of the year.

No matter how you put it, the Iron 883 is a short bike. The wheelbase is modest 59.6 inches despite the long rake of 30 degrees. While the maximum lean angles are relatively small at 27 degrees to the right and 28 degrees to the left, the 4.6 inches of trail and responsive steering geometry make it easy to transition between these extremes. 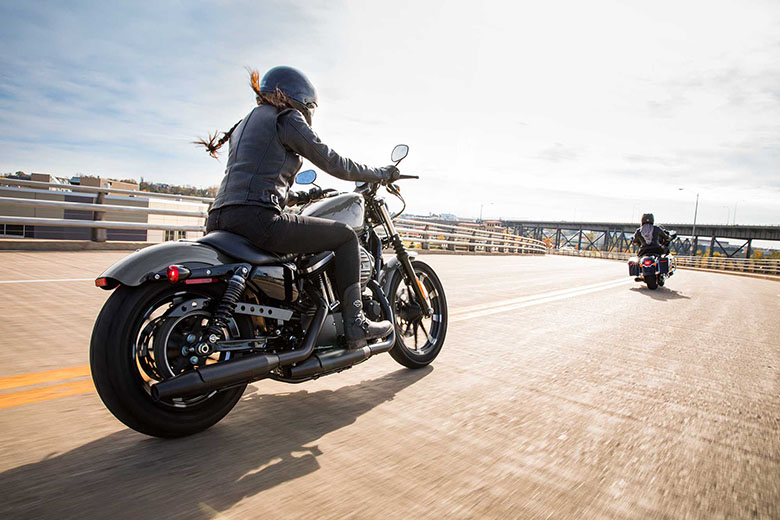 Harley keeps the riding position low on the Iron 883 by slamming the rear suspension, installing a 16-inch rear tire, and installing a 19-inch front wheel. Saddle height is a little under 30 inches when the bike is empty, making it a good choice for riders of average or shorter stature. The bike’s low center of gravity and inability to handle rough terrain makes up for its just 5.5 inches of ground clearance.

The Iron 883 only weighs 564 pounds when submerged, so the lack of twin front brakes isn’t a significant concern. Dual-cylinder calipers provide braking power and reliability at both ends of the motorbike; you may select between “old school” unrestricted braking and an optional ABS package for increased safety.

The first Evo Sporty’s underwhelming powertrain was a major turnoff for me. I didn’t find any issues with my aging Iron head. History, however, is a great teacher, and Evo has had plenty of time to prove its resilience. I would go so far as to say it’s one of the best Harley engines ever, considering they had 30 years to perfect it. The new Milwaukee-Eight engines have shown early promise, but it is pretty soon to tell whether they will be as reliable and long-lasting as the Evo.

The 45-degree V-twin air-cooled engine is a classic Harley. This devilishly witty title comes from the engine’s displacement of 53.9 cubic inches (883 ccs). It has 53.8 lb-ft of torque at 3,750 rpm thanks to the throttle body and electronic fuel injection. It has more than enough power for daily driving, and it achieves 51 miles per gallon on the highway. 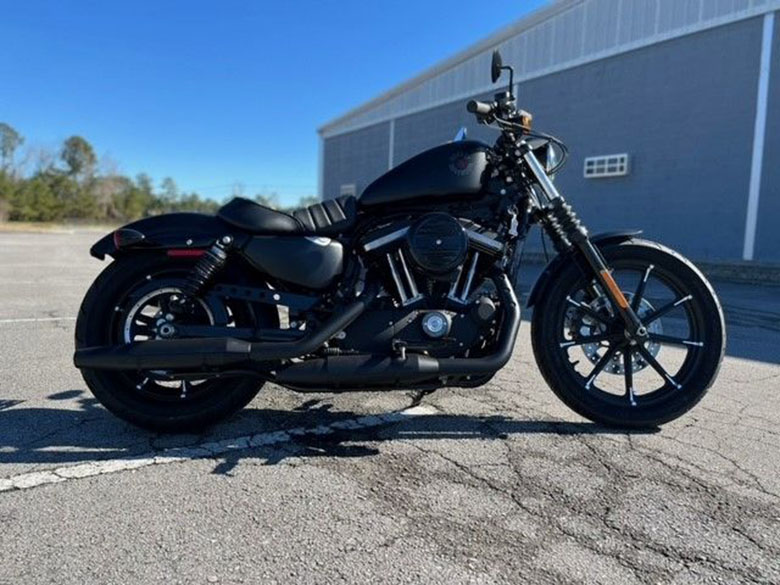 With a five-speed gearbox and reinforced-belt final drive, you won’t miss the extra gear that comes standard on its Big-Twin cousins. In contrast to preceding Sporties, the frame and rider are protected from engine vibrations thanks to this unit’s rubber mounts. There you have it, all you Harley-haters. Sportsters no longer include a leather case for the included bottle of Loctite.

You can customize your 2022 Harley-Davidson Iron 883 Cruisers for only $11,249 by picking out your favorite shade. ABS costs $819, and the security option adds another $415 to that total. Our apologies to Californians, but the cost of your emissions package will increase. 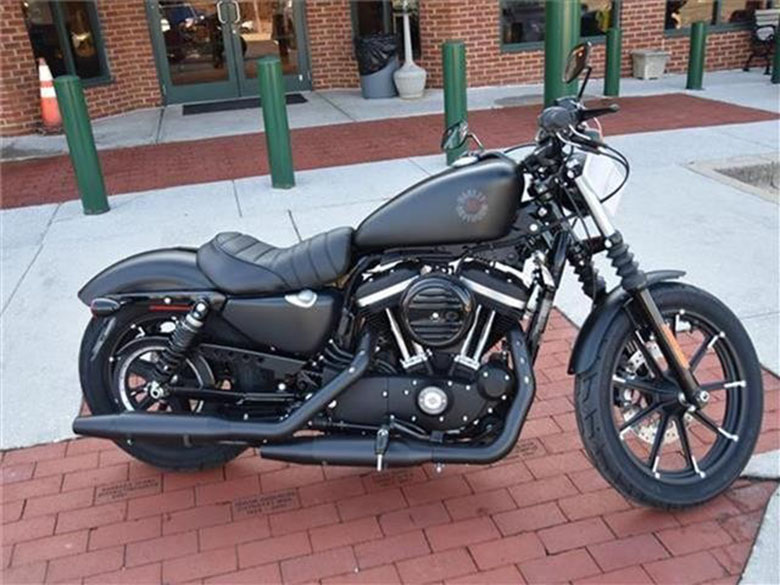 The Harley has a smaller engine displacement than the Bolt’s 58 cubic inches (942 ccs). The Harley has a steep 60-degree mill, whereas the Bolt uses the more conventional 45-degree drop for its air-cooled V-twin engine. What does it signify, except how it looks? Since none are built for off-roading or flat-track racing, it may be the personal preference in exhaust notes.

The Bolt costs $7,999, slightly less than the Sporty’s $11,249 advertised price. When comparing the many colors that Harley provides, the price difference becomes more glaring. While the price gap between the Bolt and the Iron 883 isn’t huge, I feel it’s important to point out that the Bolt is providing serious domestic market competition to the Iron 883. I’d also want to point out that every penny counts when you’re first starting.