If you’ve ridden the Fat Bob in the past and weren’t pleased, know that it underwent a significant overhaul in 2018. The Harley-Davidson Fat Bob, bobbed and blacked out, was initially available with a 107-inch Milwaukee-Eight or a 114-inch version of the same engine. Still, by 2020, only the 114-inch variant remained in production. The 2018 facelift gave the Fat Bob a more aggressive stance, with powerful engines and a (relatively) sporty new suspension system aimed at a younger demographic of riders. 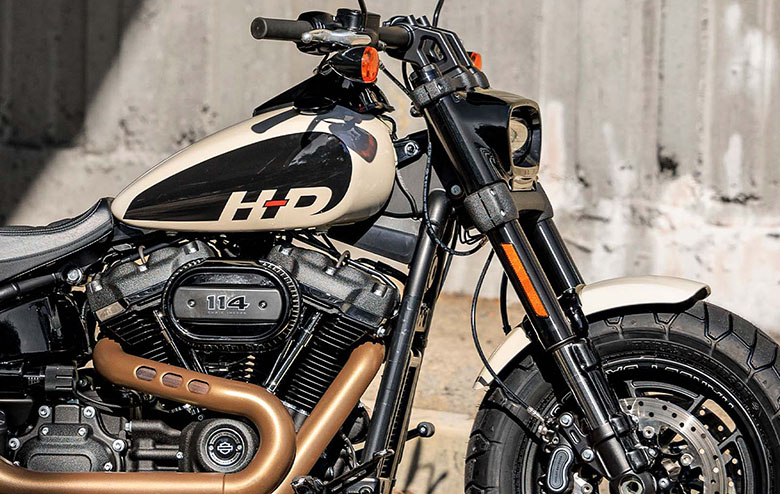 The blackout Mil-8 engines on the Fat Bob, for example, help them blend into the backdrop, and, as I’ve been informed, black is a very slimming color. Because of their size, these engines can support a fleet of smaller engines around them. They’re big, sure, but they should be able to hold that much displacement, right? The 107 cubic inch model has a compression ratio of 10 to 1, while the 114 cubic inch model has a 10.5 to 1 compression ratio and has a 102 mm bore and 114.3 mm stroke.

The dino juice is delivered via electronic fuel injection. However, we still don’t have any kind of TC or variable power delivery, and that’s growing tougher to accept when compared to the very cheap imports that do have those features and more. Even Indian Motorcycle, now owned by Polaris and therefore imminently introducing rider modes, is part of the trend. 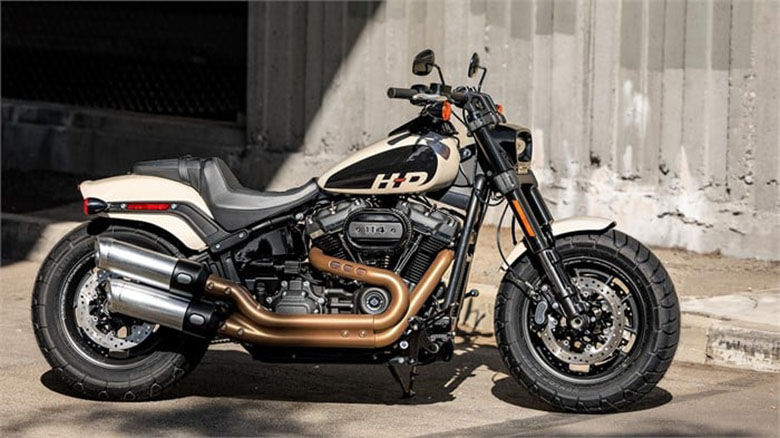 Torquey as ever, the Mil-8 plants push the limits of H-D engines, producing 107 pound-feet from the 107 and 118 pounds from the 114. It not only gives the expected stump-pulling strength but also the strongest roll-on in both fifth and sixth gear, allowing you to make passes with more authority than ever before.

Power is sent from the engine to the rear wheels using a belt drive that is both silent and durable (I have yet to break one) and low-maintenance, thanks to the six-speed transmitter. The engine balancer works to dampen vibrations caused by the engine. It vibrates a little at idle (as it should) but settles down as you hit higher speeds. Could it be too much? Perhaps, but I assure you that you will eventually adjust.

The Fat Bob is one of the few Dyna models that transitioned to the new Softail range for 2018. Its success as an FXD likely influenced the manufacturer’s choice to focus on the same modern-custom/bobber style that won over so many customers.

There are several differences between the FXD frame and the FXST frame, which is only natural. As with the other Softails, the Fat Bob’s faux-hardtail frame gives it a completely distinct silhouette, creating an air of age-ambiguity in its contours. While the first generation was unmistakably reminiscent of the 1960s and 1970s, the current model’s styling may be traced back to 1949 or as late as 1984, when the first Softail was introduced.

Although Harley has previously dabbled with bespoke motorcycles (see: the Softail Slim), this time around the company aimed for a thoroughly contemporary aesthetic; the front fender is Yamaka-sized, while the rear fender barely touches the struts, allowing for an unobstructed view of the rear hoop.

Two people may ride on the solo saddle, at least in theory, thanks to its tapering p-pad. Although it has a slick design, you wouldn’t want to risk somebody you care about much by sending them on it. 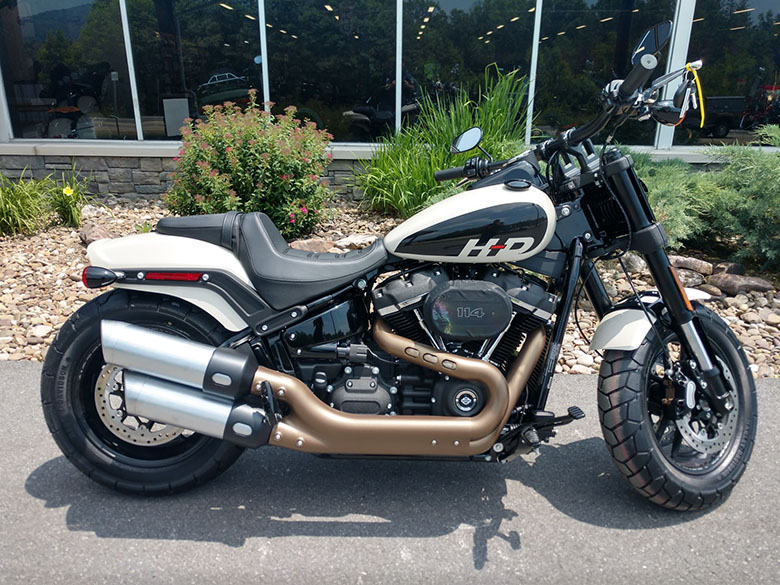 An innovative take on the traditional headlight nacelle, with a trapezoidal aperture housing bright LED headlights, has replaced the odd twin-headlight arrangement. The risers, bar, mirrors, triple tree, and inverted fork stanchions are all black, so the new nacelle gets the same treatment and blends in almost perfectly.

The manufacturer eliminated the “ham-can” air cleaner while jamming the Mil-8 engine into the frame, opting instead for a little round breather that matches the blackout treatment and chrome trim of the engine and provides some relief for your right leg. Those who ride Sportsters or vintage Big Twins will understand.

Even though the Fat Bob’s front controls are the limiting factor to cornering, the bike’s upswept exhaust system gives it an air of performance thanks to its full-length heat insulation and a kick at the muffler end. However, it may lean more than most cruiser riders are comfortable with, with a maximum of 31 degrees to the right and 32 degrees to the left. It is where only a real red-eyed pegdragger would have trouble with clearance in the sweeps.

The Fat Bob’s brand-new, improved Softail frame is made from the same tubular steel components it always has been. The first major redesign since 2000 and one of the most significant changes since its 1984 debut, the manufacturer eliminated half of the frame parts while improving rigidity and handling.

Softails were known for their poor handling and cornering abilities, so any improvements made in those areas are welcome. With 5.2 inches of trail and a rake angle of 28 degrees on the steering head, the vehicle is still relatively stable and easy to maneuver. It also has improved agility thanks to the steering head’s rake and caster.

Inverted forks up front not only add to the bike’s already stylish appearance but also improve its strength and damping characteristics. They are, however, unaltered upon arrival, making them about as plain as they always were.

A rear mono-shock is housed in the seat base, and its preload may be adjusted by hand for more precise tuning than in the past. The earlier under-tranny shocks required frequent adjusting, which included getting on one’s hands and knees with a wrench as the vehicle’s load and passengers changed. 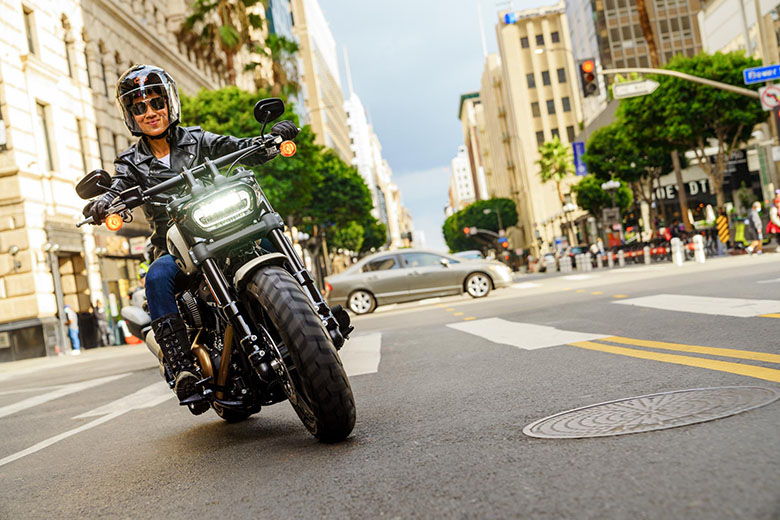 Blackout rims support the 16-inch wheels shod with thick 150/80 front and 180/70 rear tires; I like the appearance of laced edges, but it probably wouldn’t make a difference anyway since the twin front brake discs obscure the spokes almost entirely. Harley has put its linked-brakes business at the back of the closet and upgraded to ABS as standard equipment on the 114 models.

The floor is 28 inches below the seat of a Harley Fat Bob 114. It’s a little tall for a Softail, but it’s still shorter than the average imported cruiser.

In 2022, the Fat Bob will retail for $18,330 in Vivid Black or $18,780 in various colors. Security features and anti-lock brakes (ABS) are standard. Sadly, our West Coast family will soon have to shell out an extra $200 for a unique emissions package. 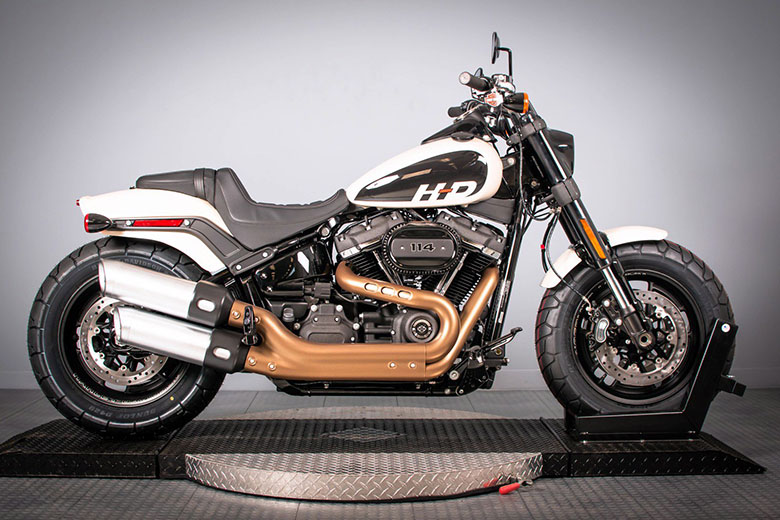 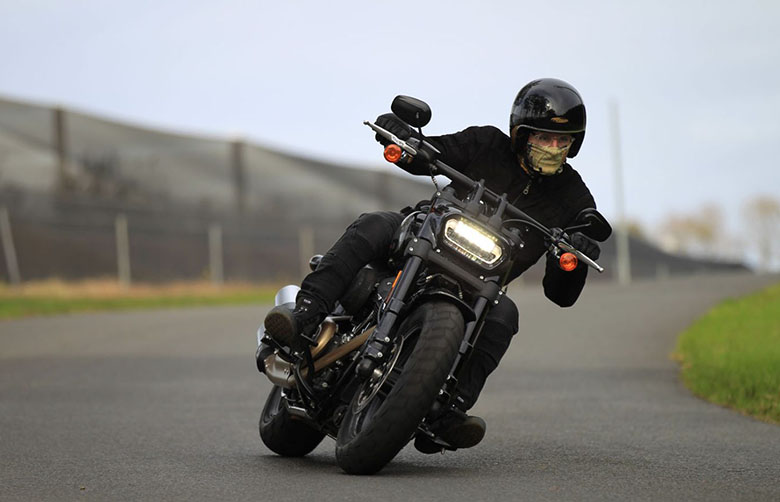 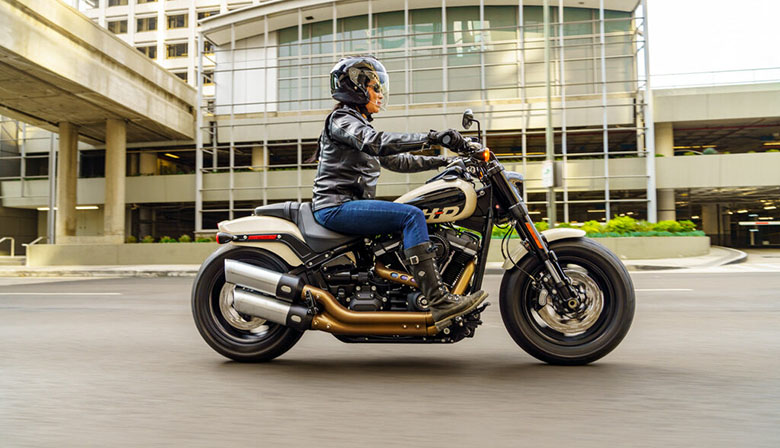 Sorry to burst your bubble, but the XDiavel is nothing more than an Italian crotch rocket with the footpegs installed in the wrong spot, and riders on one seem like they’re attempting to make Power Rangers out of Easy Riders. Besides failing to achieve its intended results, it also isn’t likely to win over anybody who is giving serious consideration to a Fat Bob. Although the electronics and suspension are better than Harley’s, the bike’s lack of power (93 pounds of grunt) is a significant drawback.

The Yamaha Star Raider was the next guitar I checked out. It’s clear that both men are fans of the custom culture, but while the Fat Bob opts for a chopping and bobbling style, the Raider opts for raking and stretching. Yamaha seems to have something cooking over there, as their stated 123-pound-foot output beats out the new 107 and 114-pound-foot Mil-8 from H-D. Yamaha adds insult to injury with a price tag of $15,199, which will undoubtedly appeal to buyers with no MoCo devotion yet and may be enough of a difference to purchase some business away from Harley.