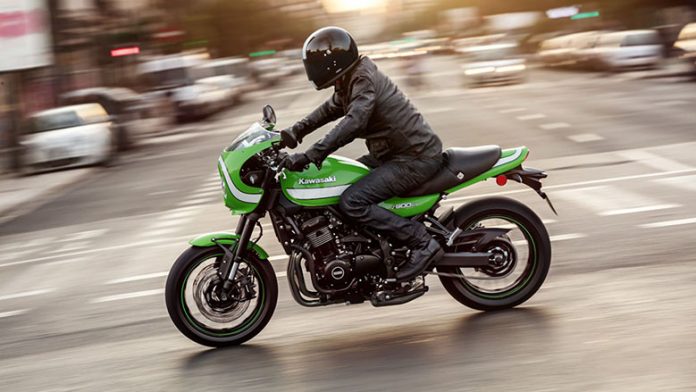 The 2019 Z900RS SE Kawasaki Street Sports Bike resurrects a legend with its much-awaited release. The new Z1 is a contemporary interpretation of the classic Z1 that respects its predecessor. Kawasaki’s latest rider assistance technology is paired with a conventional In-Line Four engine arrangement. The Z900RS is an excellent option for riders looking for a bike with character and rich history, as well as a chance to slow down, look about, and appreciate the simple pleasures of life. 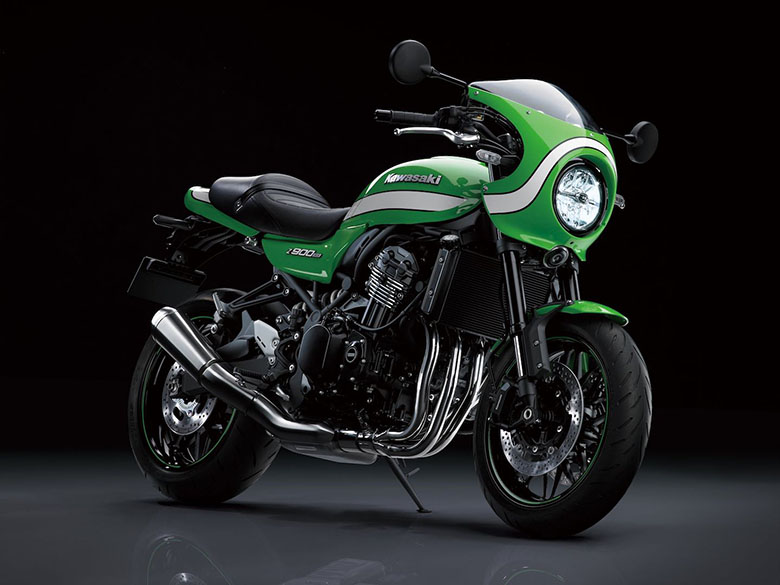 The engine is based on the Z900’s but has been returned to provide an entirely new engine character. In contrast to the Z900 engine, which has a crisp, quick-revving texture, the Z900RS was optimized for low-mid range power, giving powerful torque that aids control for riders of all skill levels. Under 7,000 rpm, the engine outperforms the Z900 in terms of performance. Shorter intake and exhaust camshafts (270 ° to 248 °) emphasize engine performance in the low-to-mid rpm band. The engine’s responsiveness is solid and smooth, making it easy to control. The Z900’s 11.8:1 compression ratio has been decreased to 10:8 to match the shorter valve openings. The Z900RS’s soft nature is due to a crankshaft with an approximately 12 percent greater flywheel mass than the Z900.

The open deck design of the die-cast cylinder block reduces weight while maintaining rigidity. Adding passages between the cylinders improves high-rpm performance by reducing pumping loss. They are made using the same unique casting method used to make the Ninja H2TM/H2TMR pistons. To decrease weight without losing structural integrity, the procedure generates hollow spots on the material’s surface. The downdraft intake arrangement provides the quickest and most direct approach to the combustion chamber. In keeping with the original Z1 design, the cylinder head has stylish fins that evoke an air-cooled engine—various Z1-inspired die-cast aluminum engine covers, including the clutch cover and many other elements.

Exhaust notes that enhance the engine’s sound during initial start-up, during idling, and at lower speeds when the rider can best appreciate the exhaust’s deep rumble was developed via extensive sound research. Exhaust header pipes with a dual-wall construction not only seem more powerful but also resist heat discoloration over time. The 4-in-1 exhaust with a small megaphone muffler adds to the classic look while increasing the exhaust sound. Its stainless-steel exhaust system has been quadrupling polished to provide an aesthetically pleasing finish. Centralizing mass, reducing muffler size, and contributing to the exhaust tone are all benefits of a pre-chamber. 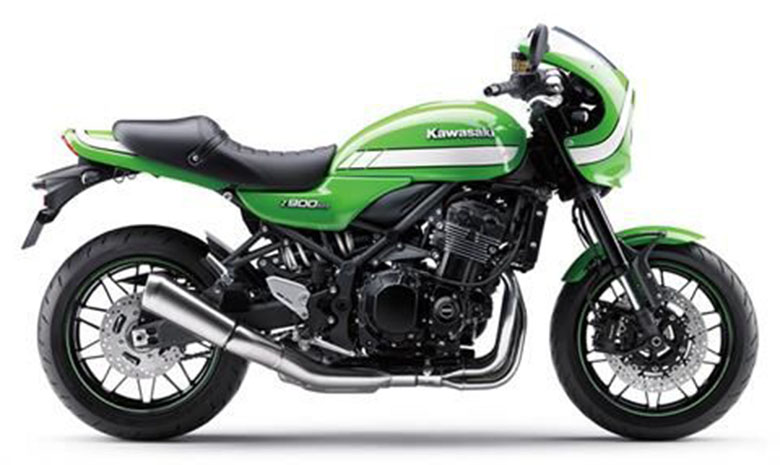 For the Z900RS, gearing has been tailored to its engine characteristics. For those who want a smoother ride on the highway, a shorter first gear and the engine’s powerful low-end torque make this vehicle more accessible to get off the ground than the previous Z900 model. The traction control system of Kawasaki motorcycles (KTRC) (2-MODE). Improved sport-riding performance and rider confidence may be gained by using a two-mode system. The operator may also turn off the method. Advanced Mode 1 allows for a bit of wheel slip to optimize acceleration. When it comes to real-time monitoring, the system analyzes various variables.

Front and rear-wheel speed (slippage), as well as several engines, machine, and rider input parameters, are being tracked. When traction conditions deteriorate, the system acts before the wheel slippage exceeds the ideal traction range. For ultra-smooth operation, Mode 2 has greater sensitivity and regulates ignition timing, fuel, and air. However, the program is sophisticated and requires a lot of resources. Because it depends solely on front and rear wheel speed sensors and the engine ECU, the system is very lightweight.

With Kawasaki’s superior analytical technologies, the trellis frame was built to fit the teardrop fuel tank and provide retro-style handling ideal for comfortable riding at a more regulated pace. If you’re looking for something that doesn’t lean too much forward than the more aggressive and forward-leaning Z900, you’ll be pleased with the Z900RS. The suspension settings were selected to provide a high degree of comfort for a more laid-back riding experience.

A 6mm increase in steering offset is achieved by the upper-triple clamp, which decreases trail and contributes to light handling by reducing the course from 28mm to 34mm (over the Z900). To guarantee that the lines of the frame are as straight as possible, the components of the frame follow the ideal pipeline. To allocate stress as evenly as possible, the angles of the bends were kept as modest as feasible. The five-point, rigidly mounted engine helps to weight reduction by being a stressed part. The low seat height and easy access to the ground are made possible by the twin-tube rear frame section.

Ride comfort and sporting potential are both enhanced by the 41mm inverted front fork. Rebound damping may be fine-tuned with 10-way compression and a 12-way rebound damping adjustment.

The rear forks are equipped with Kawasaki’s latest suspension technology, which provides a greater degree of dynamic performance and rides comfort. To keep the lay-down shock absorber from being impacted by exhaust heat, the linkage is positioned atop the swingarm and away from the exhaust. The swingarm is lightweight extruded aluminum, which adds to the car’s agile handling.

Dual 300mm front discs are held by monobloc calipers with opposing pistons that deliver a solid sensation from the first contact for excellent braking. Add to the athletic look of the Monobloc brakes with an alumite finish and laser engraved Kawasaki logo. In addition to the superb control and feel provided by the calipers, the radial-pump master cylinder helps to do this. The use of sintered brake pads enhances the sensation of the brakes.

The use of ABS provides an additional level of safety.

Flat spokes mimic the appearance of traditional wire-spoked wheels. Kawasaki’s superior analytical technology was used to create wheels that are both light and elegant, improving handling and complementing the old Z1 aesthetic. Machined spokes and rim edges add to the bike’s high-quality look on select hues. The Dunlop GPR-300 tires have a classic flair to them.

The Z900’s top triple clamp is 40mm higher than the Z1000’s, resulting in a more upright riding stance and a higher handlebar position. Flat, broad handlebars give the bike a classic look, providing a wide grip for better handling. There are 30mm more grips (total), 65mm higher, and 35 millimeters closer to the rider on the Z900 than there were on the Z900. Low-speed handling is more accessible by the car’s broad 35-degree steering angle. Rubber-mounted bar-ends on the handlebar reduce vibrations. It is possible to adjust the clutch and the brake levers in five different ways, making them more comfortable for the rider. 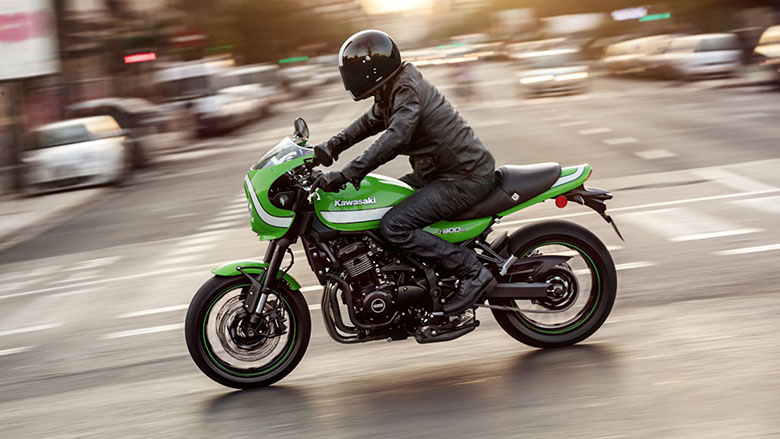 Riders may easily hold the bike with their knees thanks to the bike’s compact fuel tank. A low seat height and a thin overall shape make it easier for the rider to put both feet resolutely on the ground when they stop. Riders and passengers benefit from the extra space provided by a stepped seat. It is calmer to reach the ground since the seat is narrower upfront. Without the need for tools, you may remove the seat and access the battery, fuse box, and tool kit. Even more comfortable riding posture is provided by a foot peg adjustment of 20mm lower and 20mm forward compared to the Z900. Rider footpegs include rubber cushions and rubber-mounted weights on their undersides to decrease vibration transmission through the feet.