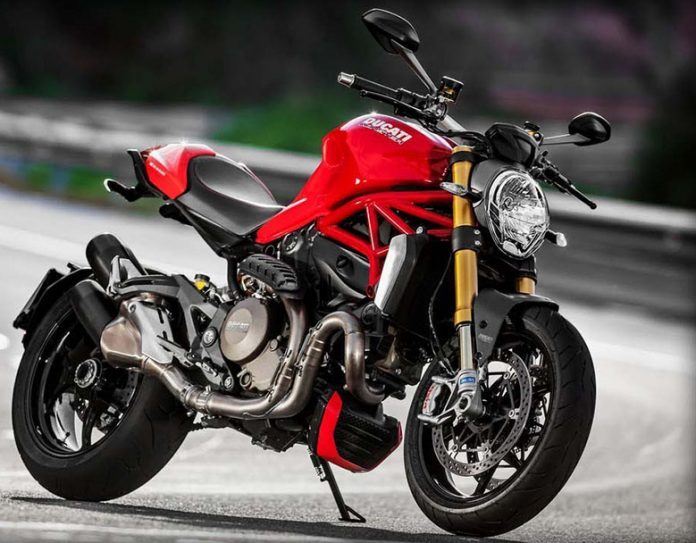 Monster is unmistakable in its aggressiveness as it races. The Monster 1200 R’s sporty, small, and lightweight aesthetics create an initial impression. To complement the athletic lines of the rear section, which are made possible in part by the new, light, compact structure, the tank’s classic Monster design is retained. Tailpiece designs that are sleek and sporty draw attention. The seamless delivery of 152 horsepower by the R power unit gives the engine’s sound a racing tinge. The overall review of 2019 Ducati Monster 1200 R Naked Bike with its specs is given below. 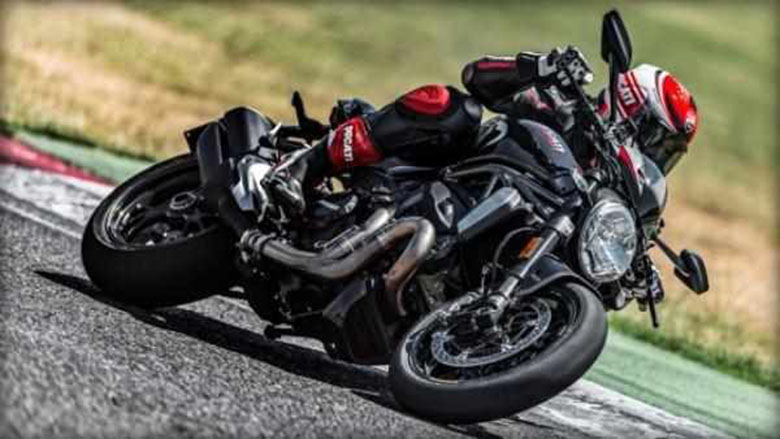 This minor, lightweight assembly is instantly associated with excellent performance and power thanks to the tank’s classic Monster design and the sport-inspired, graceful rear lines. The 2019 Ducati Monster 1200 R Naked Bike has undergone extensive rework to reduce overall weight and heighten the rider’s center of gravity. With its tapered, sharp-edged design in the passenger part, this single-piece rider and passenger seat seem to be shorter and slimmer.

High-placed aluminum plate holders on the back of this motorbike further improve its streamlined appearance, allowing the 200/55 rear tire to be wholly exposed; both the rear and front tires are mounted on 3-spoke, Panigale R-inspired forged wheels.

Race-inspired footpegs for the driver and passenger offer a cleaner side view, complemented by an enormous exhaust that meets Euro 4 regulations and is seamlessly incorporated into the rear end.

On the Monster 1200 R, the finishing touches are found in two places: the nose fairing and a longitudinal graphic pattern modeled by Ducati Corse’s trademark stripe. Its exclusivity can be seen in the attention to the smallest of details, such as the sand-blasted graphic “R” pattern on the radiator metal covers and the contrast seams and model nameplate on the bi-material seat. 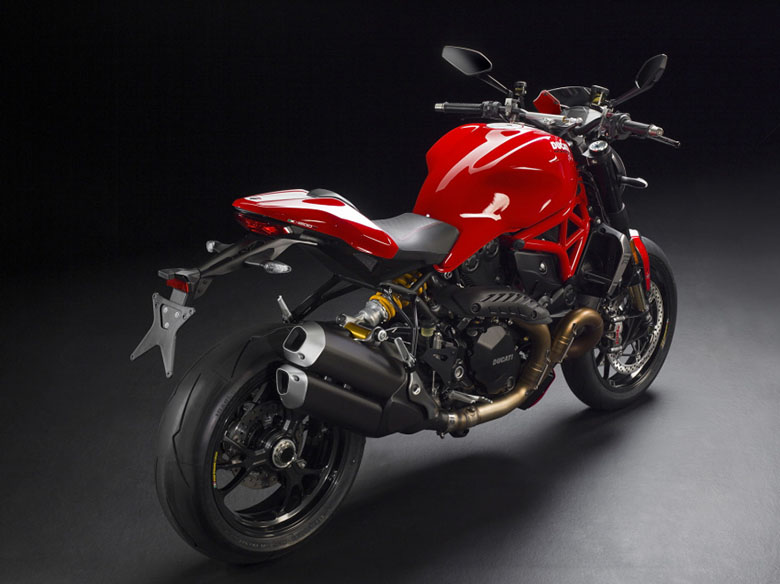 Testastretta 11° Dual Spark engine of the Monster 1200 R is fitted with a 2-1-2 exhaust system with 58 mm diameter pipes and modified twin silencers for the Monster 1200 R The exhaust pipes have an 8-millimeter increase in cross-sectional diameter even though their routine hasn’t altered, helping the engine breathe better owing to a revised throttle body. With a 56 mm equivalent diameter, the Monster 1200’s initial circular form has been replaced with a more extensive, oval section design. To improve combustion efficiency, a lower-height cylinder seal has allowed for an increase in compression ratio from 12.5:1 to 13:1.

Compared to the Monster 1200 S, the “thrust” of the “R” variant stays powerful and energetic beyond 7,000 rpm, increasing power and torque over the rev range. At speeds of up to 10,200 rpm, a rider may unleash the full power of this engine in an exhilarating on-track experience. Delivery is constantly smooth and responsive to throttle opening at lower RPM throughout road usage, with 75% of the torque available at 3,500 rpm already. 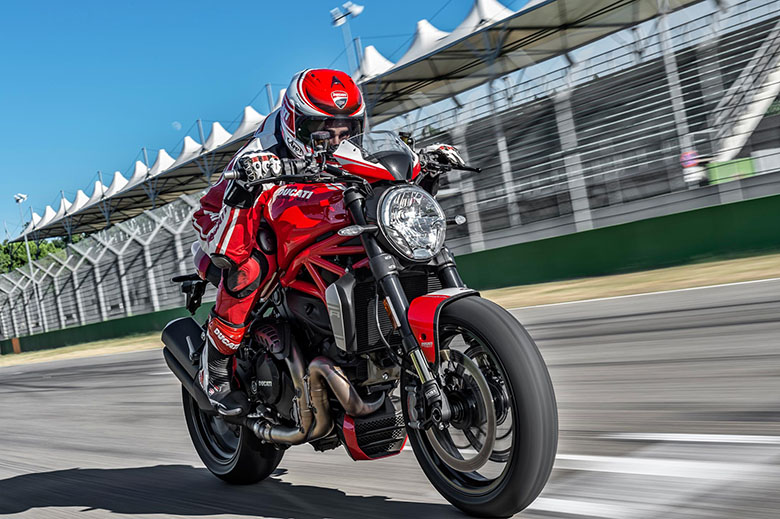 Using a Brembo master cylinder, the Monster sports a wet clutch ‘slipper’ function. For smooth and gradual operation, it has a self-servo mechanism. Major servicing should be performed every 15,000 kilometers (9,000 miles) or 12 months, with valve clearance adjustment checks every 30,000 kilometers (20,000 miles) (18,000 miles).

A race-derived solution pioneered by the Panigale in production bikes is still present in the Monster 1200 R’s Trellis frame. This design results in a structure that is both light and compact, while the big cross-section pipes provide significant torsional strength, enhancing the 2019 Ducati Monster 1200 R Naked Bike’s dynamic profile.

With this design, a compact framework supports the passenger footpeg brackets – now a different format from the rider’s, to provide better flexibility of movement for road and track sports riding.

Footrests for the rider and passenger are forged aluminum and have a surface pattern intended to improve boot grip when riding. To match the Monster 1200 R’s sporty nature, the rider’s footpegs include metal heel protectors.

Because of this, the chassis set-up has been lifted 15 mm at both ends, and the seat height has been modified to 830 mm (32,7 in) so that the vehicle may be driven on a track. It has provided a natural riding posture and greater control for both road and track usage, allowing the rider to complete more laps with less effort.

Additionally, weight loss was a severe concern. Weight reductions of 2 kg (4.4 lb) were achieved via the tailpiece, wheels, carbon fiber components, and footpegs (397 lb). Weight reduction was made possible in part by the Monster R’s more agile handling due to the elimination of unsprung and inertia mass. 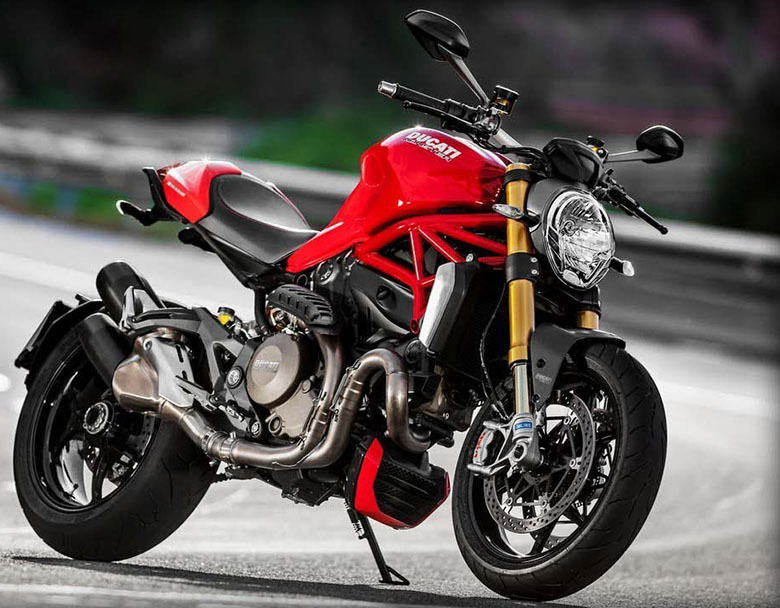 A bi-compound tread with polymers on the 200/55 ZR17 rear tire ensures a rapid and continuous grip in every riding situation. Front and rear profiles are correctly matched, resulting in better handling and agility. Long longitudinal grooves extend from the central profile region to the shoulder of the bi-compound tread pattern, guaranteeing even in the roughest riding conditions. To maximize adhesion and grip, DIABLOTM tires have a “bare” shoulder region that is perfect for sports riding.

For the Monster 1200 R, Brembo has used their top-of-the-line M50 Monobloc calipers and 330 mm discs, both found on the 1299 Panigale supersport. A master cylinder with a remote reservoir controls the braking system. The Monster 1200 R has a single Brembo caliper with sintered friction material pads gripping a 245 mm disc at the rear, which improves efficiency. Braking is regulated by the Bosch 9MP triple stage ABS – which the driver may disengage.