Harley Davidson is not the only American manufacturer of Indian custom marks quite as emblematic and established here in the south-east of the USA, proposes alternatives which do not have to redden the comparison. Such this Classical, lately imported Indian Chief on our premises. In saddle! 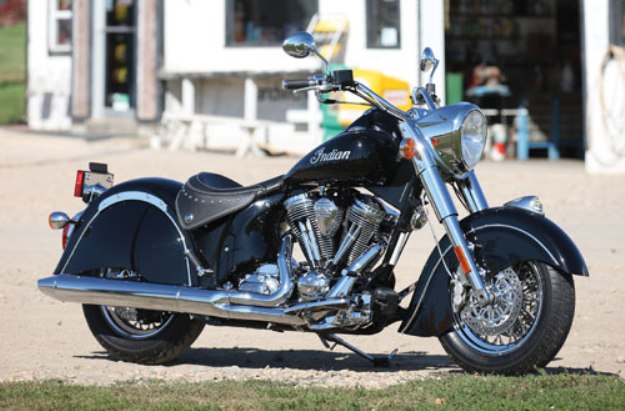 Born in 1901 in the United States, Indian is one of the oldest brands of motorcycles in the world. Like all the firms with so rich past, Indian knew its hours of glory: industrial with supplies for the army; sporting, with speed records (see on this subject the film “Burt Munro”, with Anthony Hopkins and Indian in guest stars.
The other American famous brand thus is also re-elected for the many ones impassioned like the members of Indian club of France, which dedicate worship without terminal with the ancestors made in America. The Indian brand, first of the name, lowered the curtain definitively in 1953. For, the such phoenix (let us leave the eagle to another manufacturer…), to reappear of its ashes under the impulse of the industrialist shouting Craft, specialist in other vessels, deep-sea this time, with the whole beginning of this century.
Always difficult beginnings, Indian reconsidered the front of the scene in 2008 with a much succeeded motorcycle, Indian Chief. Equipped with the Power engine Plus 105 cubic inches and declined in several versions, this alternative to the Harley-Davidson ogre proves completely credible. 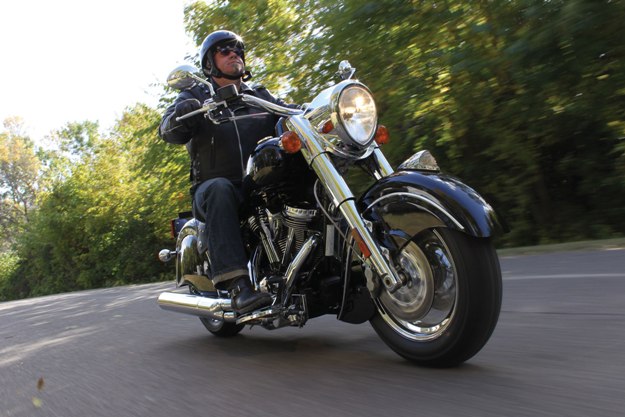 “Power Plus” but not full!

By far, in addition to the chromium profusion and the pace rather “vintage”, Indian Chief resembles many customs, even points out certain productions of Kawasaki, which had copied the style Indian there is little with the Drifter (we do not make however any amalgam). Of close, Indian appears completely singular, original and, in a word, sublime.
Quality is indeed to go with in spite of some details which annoy, like the apparent sons behind the broad headlight. However, the retina remains magnetized with the engine, true heart of the motorcycle, with its splendid aillettage. This showpiece, door of chromium, would decorate with wonder my living room!
But Indian is before a whole motorcycle, gross 1,720 Cm3), long (more than 2.50 m), door (330 kg dry), but, at least, very low of saddle (708 mm), which facilitates the task of the average gauges at the time as of operations. With a size of 1.70 m, one poses the feet on the two sides, almost flat, once in saddle. Side ergonomics, the position remains classical enough for the kind. The width of the handlebar and the establishment is a little far away from the footboards that will allure the higher gauges more.
“One” then “Start” and V twin with 45° barns oneself, Power More than 1,720 Cm3 astonishes from the start by his strength. Admittedly, our model of loan is the pastille on the level of the exhaust and released side filter air, that is to say a configuration in which more than 80% of the customers are rolled. However, the level of decibels does not have what to awake the entire district.
It is sound, but not noisy, and what a voice! Obviously, this engine has already a beautiful generosity, goes up in the turns without trailing in spite of its long configuration “chases”, transmitting its batch of vibrations (in the handlebar, especially). 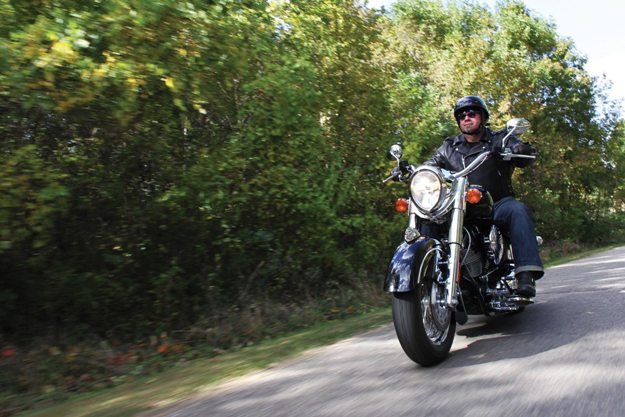 While going up on board Indian Chief, one cannot prevent oneself from raising the differences with the Harley-Davidson models. Directing less although Dyna, Indian Chief also claims to play of the clutch (hydraulically-operated a firm hair compared with the softness of the models with cables H-D) to take off or turn to the corner of a street.
That’s because of a sensitive deficit of flexibility compared to Twin Camwood of Milwaukee. On the other hand, the Indian engine is much faster also to take its turns/min and more virile in its way of delivering the power, in particular with low mode.
On Indian Chief, one overlaps a standard recently domesticated, whereas most Harley-Davidson seems drawn up for a long time (in “attached” version, certainly). Even if it would be necessary to compare with equal footings to be definitively affirmative, Power More is not less one frank success and allows a daily use for it, while remaining very alive in this released configuration, almost “street legal”. With the limit, it would be liked that the selection is softer.
However, mechanical approval between 50 and 140 km/h appears completely satisfactory to us. One understands very quickly why mechanics Indian news era, so “young”, if is already succeeded, by raising the CV of certain technicians of the brand. Indeed, most engineers come from Harley-Davidson or Polaris for example, Indian thus profiting from a team experienced to start again her brand. 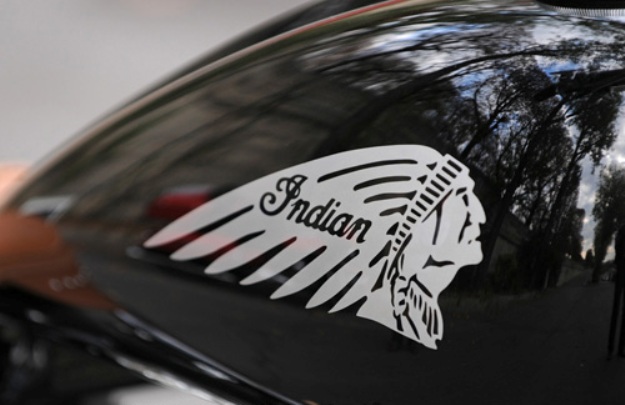 It is neither calf slackness nor a sausage

Out of engine as in part-cycle, let us recognize that Indian was frankly not flunked for this rebirth. At ease downtown and on minor road, Indian benefits from a rather low centre of gravity and, thanks to its “small” broad back tire of only 150 mm, does not become a truck in the corners. If it directs less although Harley-Davidson, it is much more handy than the Japanese mastodons of the kind. On road, Indian Chief reveals even a remarkable balance thanks to a generous footing and is characterized by certain rigidity in the curves.
Posed well on its wheels of sixteen inches, it changes course without sculling or very seldom (in large curve with more than 140 km/h meter). The reactivity being one of the fundamental values of Indian, one finds it as well in the behavior of the engine as of the part-cycle. Indian Chief appears indeed faster, more rigid and precise in the changes of management that a good amount of customs. Moreover, the ground clearance is adapted to our sinuous European roads.
This Indian new generation takes sufficient angle without rubbing with all-goes and one can roll up on his board without trailing itself, whereas a Kawasaki 1700 Classic unceasingly awakes you by the metal squealing of its foot-boards. Side braking, Brembo equipment appears sufficiently powerful. Only the back blocks too easily, which can prove to be awkward on a custom that it is necessary “to sit” during the strong decelerations.
For the blow, Harley-Davidson proposes sometimes more, with its dissimulated but effective ABS. Side comfort, the back shock absorber of Cantilever type absorbs the inequalities correctly. But stripped of rods, it arrives sometimes into obstinate on the potholes (normal, with 73 mm of clearance…) and progressiveness misses. The vibrations, sensitive to the handlebar especially, do not stick ants in the fingers to the current modes.
But all that passes to the second plan because approval is ultimately very satisfactory. Indian is beautiful, a typical and very quickly gives the desire for rolling, proposing a scientist mixes character, of approval and this zest of brutality which imposes certain rules on its handlebar. 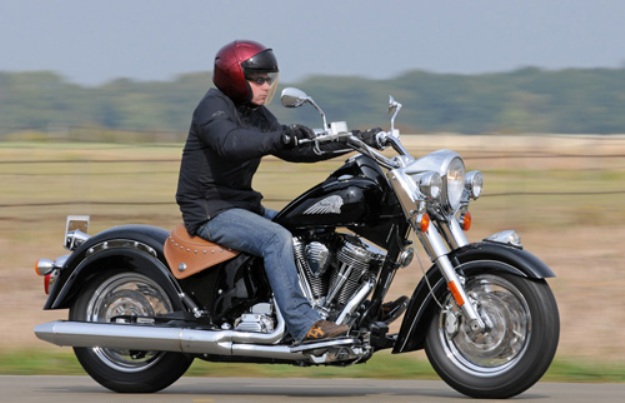 Assessment: An alternative which costs… Sioux

While making Indian Chief Classical with the concession, a conclusion is essential: Indian made a success of its return. The mission, on the technical plan and dynamics is accomplished. Moreover, the Power engine offers one skilful mixture of character, singular performance for a custom, and of approval (aesthetic like practice). 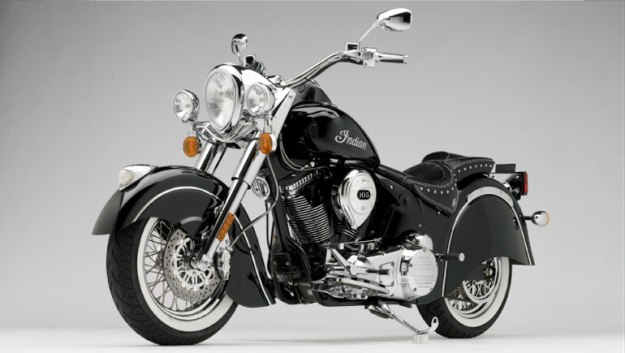 Remain a high price: 29,990 €, is 10,000 € of less than during its launching in France a few months ago of that, but still 10,000 of too vis-a-vis the models made in Milwaukee. The rhythm of manufacturing of the factory (between 3 and 17 motorcycles per day) explains this elitist rate partly (even in the United States, where it is sold 26,000 $), which confines Indian with the row of motorcycle of dreamed or cult object. Undoubtedly a choice of the Indian team, with which we are obliged to draw our hat for completed work.