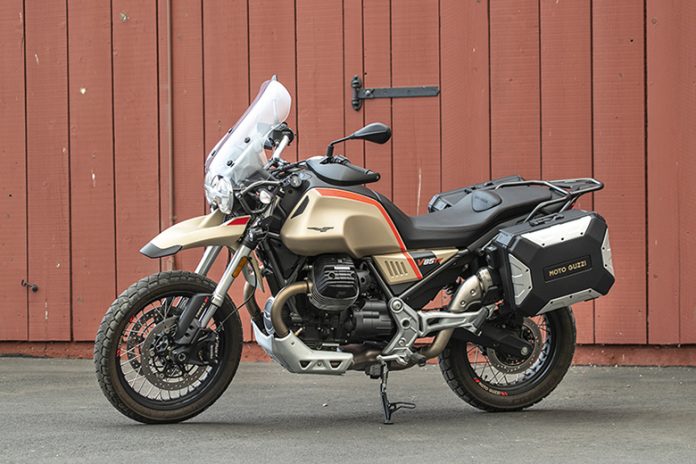 The Moto Guzzi 2022 V85 TT Travel Enduro Bike is all set to accompany you on your next great trip, no matter where your travels take you. The name itself is a hint that this vehicle is built for traveling. This bike is built for adventure, which is why it has a Touring windscreen, LED fog lights, and Urban side bags with plenty of storage space. While the Michelin Anakee Adventure tires’ superior performance is a perfect complement, there is also a slew of electrical and multimedia features to enhance the overall enjoyment of every ride. 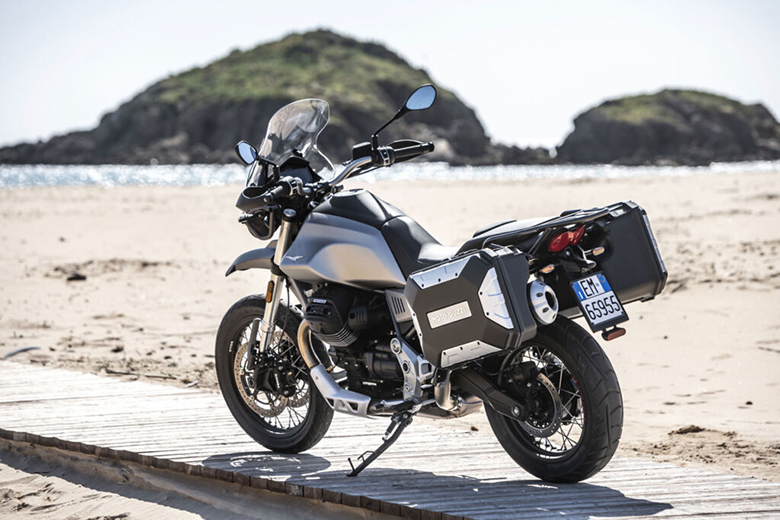 Your Smartphone Takes on a Whole New Dimension

When you’re riding the V85 TT TRAVEL, it’s not only the new Moto Guzzi engine that’ll catch your eye. Additionally, the 850cc Euro 5-compliant beauty comes with Moto Guzzi MIA, the multimedia platform that links your smartphone and bike and provides access to many new features. To put it the other way, it’s a fun new method to get to know and better manage your bike than before.

V85 TT TRAVEL comes in Sabbia Namib, a light brown color that flatters the bike’s contours, and the fuel tank and side panels boast a bright red stripe as well, making the bike stand out. It is just another reason why this bike is an excellent choice for long-distance travel.

The V85 TT TRAVEL provides a simple, straightforward, and exciting ride. Regarding maintenance, the shaft-driven V85 TT series is the only one of its kind in its category. In addition, a significant suspension and an aluminum sump guard shield the engine from the ground, allowing for better comfort on and off the road.

A Dream with Open Eyes

The V85 TT and V85 TT Travel cannot be described in any other manner. It is due to the Euro 5 engine’s improved low- and medium-speed torque. Five riding modes lead this experience, which is meant to surprise even the most seasoned riders. All-new aesthetics and tubeless wheels make every ride more enjoyable. Embrace the fact that you can’t wait to ride. 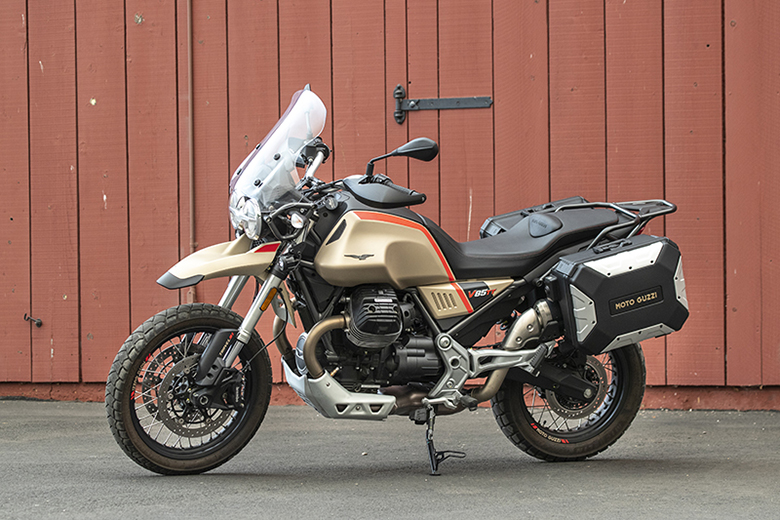 Three Riding Modes already exist, but two more have been added, making it easier for riders to handle traction control, ABS, and throttle responsiveness. Standard features include a color TFT instrument panel and cruise control. Additionally, Moto Guzzi MIA, a multimedia platform that links the smartphone to the car, extends the instruments’ functionality and is included in the extensive collection of specific accessories.

The Mandello Eagle’s engine is a 90-degree transverse V-twin with two valves per cylinder and is equipped with a rod and rocker arm distribution system, which is unique to all Moto Guzzi motorcycles. The engine control electronics have been significantly upgraded, resulting in more low and midrange torque for the vehicle.

Because of the tubeless tires and their new spoked wheels, the unsprung weights are reduced by around 1.5 kg, further improving the car’s already exceptional driving characteristics.

Motorcycles aren’t just vehicles; they’re also a way of life for many people. No matter where the adventures take you, the V85 TT is ready to join you, comfort or performance intact. The V85 TT accomplishes an ambitious ambition by fusing an iconic look with the amenities of a contemporary travel enduro. This value is becoming more uncommon in a market that is becoming increasingly homogenized. A traditional enduro is thus the first to be introduced to the market.

Distance is Never a Problem

The V85 TT Travel gets all of the V85 TT’s technological upgrades. Several features set it apart, including the Touring windscreen, the Urban side cases with large capacity and decreased side dimensions; the two extra LED lighting and the set of adjustable heated grips.

The Cuirassiers and Moto Guzzi: 75 Years of History

Modern vehicles started to replace outmoded royal carriages for official travel involving the President of the Italian Republic, beginning a long association between the Cuirassiers’ Regiment and the Eagle from Mandello. It necessitated another mode of transportation for the accompanying Carabinieri escort made up of specially selected – and very tall – members. 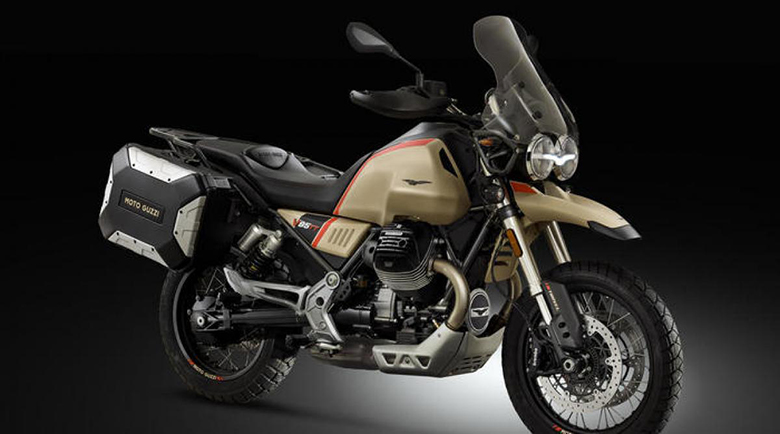 Moto Guzzi was the obvious option because of the company’s long history of involvement with the Italian military services, as well as its many triumphs in motorcycle racing dating back to the 1920s.

Because they needed to motorize their unit swiftly, the Cuirassiers went through four different Moto Guzzi models in over five years. As a result, the Alce, the Superalce, the Astore, and its direct descendant, the Falcone Sport, were added to the regiment’s arsenal of combat bikes.

Only the Astore could have the motorcycles customized for the Cuirassiers, including the parts related to their unique height (in fact, the minimum height requirement to join the regiment was 190cm).

When the President of the Republic and foreign Heads of State visited Italy in the late 1950s and early 1960s, Falcone Sport (with an electric starter from 1959) was still the vehicle of choice. In 1968, the Cuirassiers’ motorcycle fleet saw its first significant modification due to advances in motorcycle technology. It was with the V7 Special units that Moto Guzzi’s single-cylinder period ended, and the company’s groundbreaking transversal V-twin became its trademark.

When the V1000 I-Convert was released in 1975, it was one of Moto Guzzi’s most groundbreaking models. A unique integrated braking system made possible by the I-1000cc Convert’s engine set the stage for another 40 years of Moto Guzzis to follow in this position, making the I-Convert the first motorcycle to do so.

The Cuirassiers and the numerous Moto Guzzi California models, which became progressively powerful and had greater engine capacity, began their long association in the mid-1980s. By 2007, displacement had risen to the impressive 1380 cc of the section monarchy, the California 1400 Touring, which was used in the Cuirassiers’ parades and presidential transfers, up from the 1985 displacement of the California II.

It was in May of this year, which commemorates Moto Guzzi’s 100th anniversary, that the Eagle brand sent Sergio Mattarella two V85 TT motorcycles, which have since become part of his bodyguard fleet.

Designed expressly for the event, the new motorcycles sport a livery evocative of the California 1400 units currently in use. 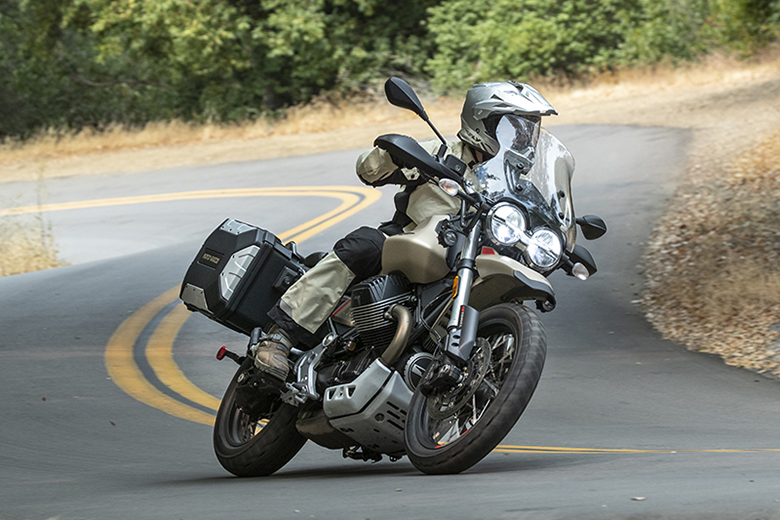