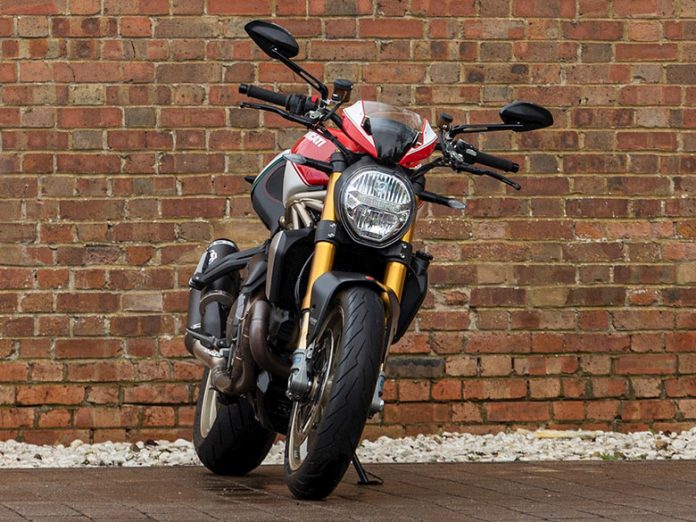 Production of the Monster started on March 5, 1993, and within a few years, the bike had become an icon in the motorcycle industry. The model was instrumental in starting the Naked Sports Bike category, and a passionate community of riders emerged around it: the Monster fans. Ducati created monster 1200 25° Anniversario to commemorate the first 25 years of the renowned motorcycle’s existence – over 325,000 of them have been built since 1993.

Only 500 of the Monster 1200 25° Anniversario will be made, which for Ducati is the ultimate manifestation of a Naked sports bike. On the nose fairing, the fuel tank, and the passenger seat cover, there is a unique livery based on the Italian flag, inspired by the Monster S4RS Tricolore of 2008. The 25th-anniversary emblem is embroidered on the premium seat, which matches the unique color scheme wonderfully.

Another distinctive characteristic of this Monster is the gold-colored frame and forged Marchesini wheels in the same color with W spokes, which are standard fitment. Other renowned elements machined from solid are also found on this bike. While the brand new front and rear mudguards, the keyhole cover, and the exhaust heat guard are made of carbon fiber, the articulating brake and clutch levers are made of aluminum. As a unique bonus, the Monster 1200 25° Anniversario comes with a custom-designed bike cover. There are 25 years on our most recognizable bike. Our Monster 1200 25°Anniversario is a numbered edition of 500 bikes designed to commemorate the occasion. 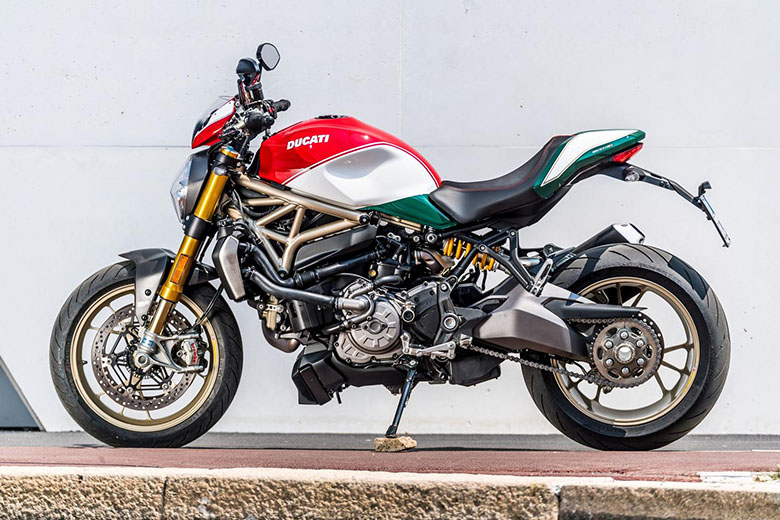 It’s hard to believe that our most recognizable bike is now twenty-five years old. We’ve designed the Monster 1200 25°Anniversario as a numbered edition, one of just 500 made.

New Monster 1200 25th Anniversary motorcycles were created with a progressive numbered plate attached to the frame.

To celebrate the Monster 1200 25th Anniversary, the headlamp, tank, and passenger seat cover sport a three-color Italian flag livery inspired by the famous 2008 Monster S4RS Testastretta Tricolore. The bike’s 25th anniversary is commemorated with a logo stitched on the seat.

The Monster 1200 25° Anniversario offers the most significant chassis setup anybody could hope for on a Naked sports bike. The tubular steel frame and the single-sided aluminum swingarm have been outfitted with the completely adjustable Ohlins fork, an Ohlins rear suspension that can be fully adjustable, and a steering damper from the same manufacturer. Brembo discs, including a diameter of 330 mm and Brembo M50 monobloc calipers, make up the top-notch braking system. Brembo calipers are used on the rear 245 mm diameter disc. 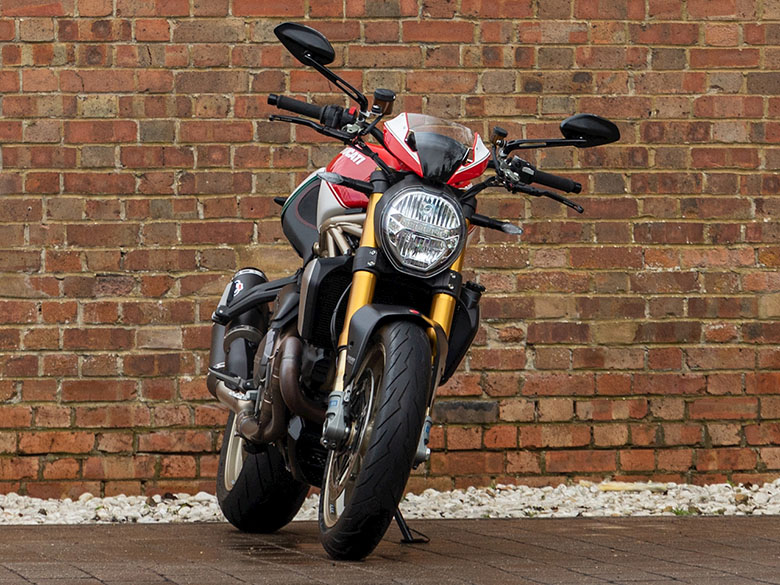 To provide optimal riding enjoyment, the Monster 1200 25° Anniversario is equipped with the newest generation of the Testastretta 11° DS. This engine ensures excellent levels of power and torque, and fluidity and completes delivery even at low rpm.

Twin-cylinder Monster 1200 25° Anniversario produces 147 horsepower at 9,250 revolutions per minute (RPM), as well as 124 pound-feet of torque at 7,750 RPM. The Monster 1200 25° Anniversario’s Testastretta 11° DS engine has extensive service intervals thanks to Ducati’s continual focus on quality and dependability. For example, the valves need to be regulated every 30,000 kilometers.

Besides the IMU, which feeds data to the ABS Bosch Cornering and Ducati Wheelie Control (DWC) systems, the outstanding electronic kit offers three riding modes (Sport, Touring, and Urban). The Monster 1200 25° Anniversario’s authentic Ducati performance is guaranteed by these high-level electronic systems, which also include Ducati Traction Control (DTC) and brand new Ducati Quick Shift Up and Down (DQS) for quick gear changes without using the clutch, as usual providing a high level of active safety control.

The rider may adjust the Riding Mode settings using a pleasant and user-friendly interface provided by the color TFT instrument panel, which displays all the required information. 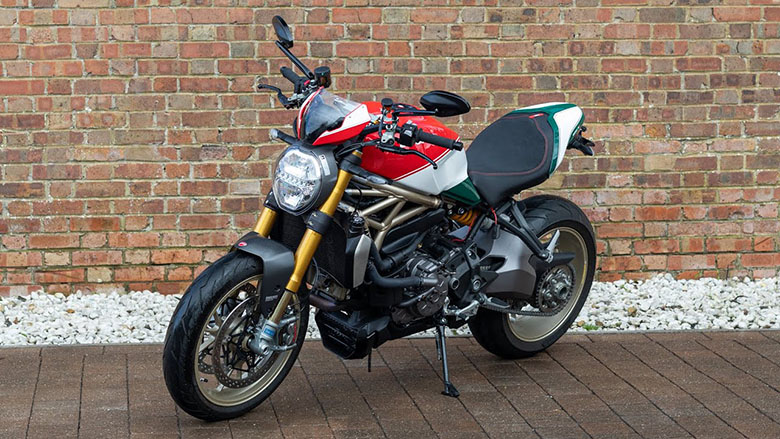 In addition, the DRL (Daytime Running Light) system in the headlamp makes it possible to notice the motorbike right away throughout the day. Although it won’t be available until September in Europe, Japan, the US, or Australia, the Monster 1200 25° Anniversario is available for pre-order at all Ducati Stores.

The Marchesini forged rims with gold-colored W spokes on the Monster 1200 25th Anniversario are only the beginning of this naked sport bike’s impressive features. The fork and rear shock absorber are both Ohlins and completely adjustable, as is the steel tube trellis frame and new aluminum single-sided swinging arm. 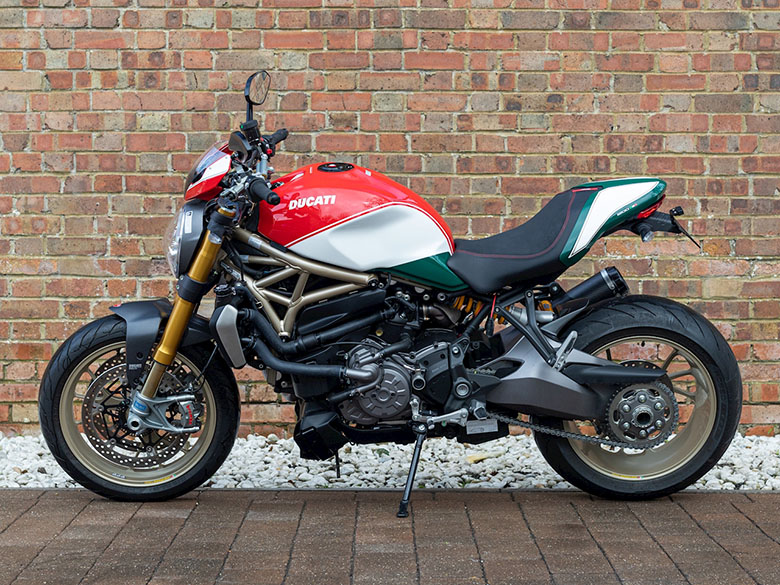