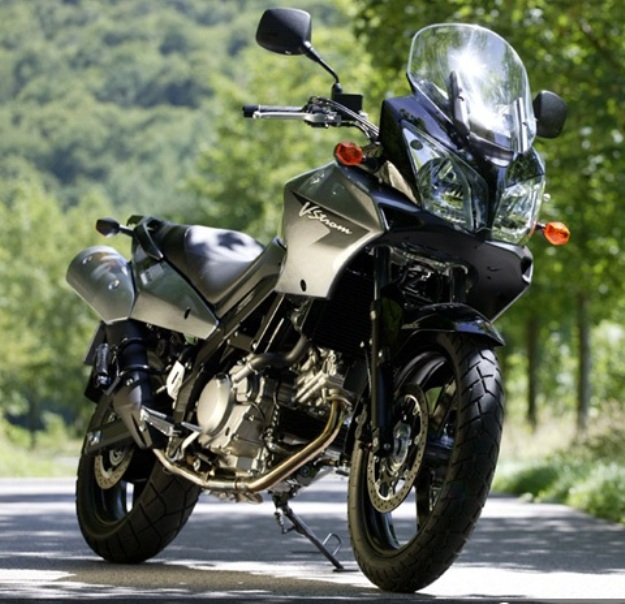 Exit at the end of 2003 after his/her big sister 1000, Suzuki DL650 V-Strom is a motorcycle well-known as “knife-Switzerland”, at the same time general-purpose, comfortable and economic. And as reliability is with go, this trail-lorry driver proves to be an excellent choice on occasion. Assessment

Good deal with to do everything!

Presented at the end of 2003, Suzuki V-Strom 650 is a copy in (small) reduction of his/her big sister 1000. She is motorized by the twin-cylinder borrowed from the SV, quietened down just a little for her program trail. Its architecture based on its framework doubles the aluminum beam that enables him to display a light weight (189 kg dry), and a rather low center of gravity.
It keeps her big sister at 1000 rather a high gauge, with a saddle to 820 mm, and even 835 on the latest! Moreover its width imposes one small effect of arcade which does not encourage the court (E) S on leg… Braking is identical for him to the “gross” V-Strom, with an option of ABS made available starting from 2007.
Comfort is ensured by suspensions which do their work well. The conventional fork is adjustable reloads some, just like the shock absorber, of which the adjustment is facilitated by a very large accessible serrated roller. The bubble protects well from origin, except for the very large ones which will often choose higher.
With use, Suzuki DL650 V-Strom proves very reassuring. Passed the first hesitation due to the gauge, one very quickly finds his brands on this easy machine. Its twin ultra flexible shows a good will all in roundness, with strength but without brutality.
Its turning radius allows half-turns in a handkerchief. But that one is not mistaken there, under its appearance of wise and comfortable motorcycle. A driver of V-Strom on a small mountain road will be well armed to resist in all relaxation inclinations of most sporting!
Always lends to the travel, in solo as in charged duet, Suzuki DL650 V-Strom has all the assets of a true versatility. Economic with the purchase, in insurance, consumption and maintenance, it will level the small budgets. And as it holds very well the dimension on occasion thanks to an excellent reliability, it is very a good deal!

Points to be controlled on Suzuki DL650 V-Strom

Ultra reliable, Suzuki DL650 V-Strom does not have almost any defect if maintenance is respected strictly by the owner… and mechanics! Its statute of motorcycle-reason returns it little run by the furious ones in all kinds. It is so much better for the second-hand market.

As on a SV, the engine planning in the event of wheeling is prolonged. But the “usual” owner practitioners not the stunt, V-Strom are not concerned with this problem, contrary to the roadster… 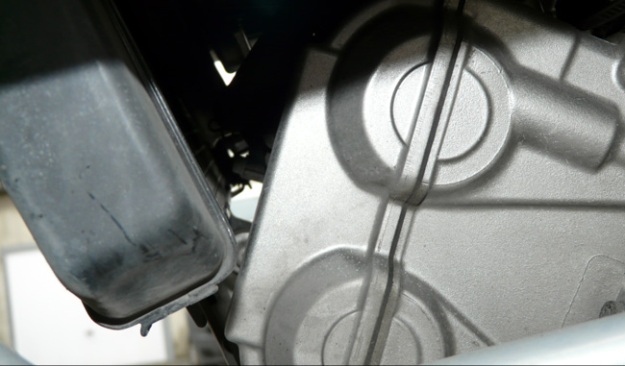 As on the SV always, the well of candle of the front roll can fill of dirtiness and can be stopped as well, causing failures even chocks if maintenance were badly made. Indeed, Suzuki specifies well that it is necessary to emerge at a stretch of the evacuation of slaps in the face with the workshop… The presence of a small flap under the radiator is enough to eradicate the problem. 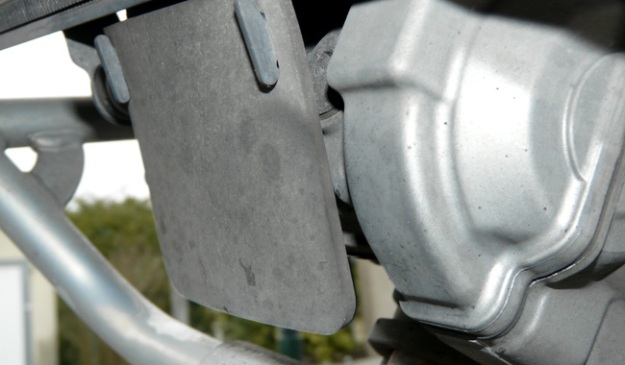 The distribution has such a tolerance that even the recommended talks are rather a precaution that a need. In practice, one can not open the engine very well if no noise appears!
Attention with fastening with 34 horses (feeble engine and more nothing starting from 7,000 tr/min), to entrust exclusively to the network to preserve approval! Many machines were delivered attached, and some (especially downtown) are resold by drivers tested in the state. 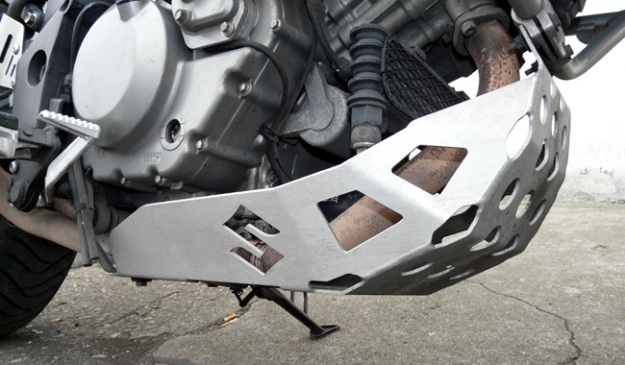 In spite of a rather important ground clearance, to equip its machine with a shoe (as it is the case on the occasion in all end of file) is a good idea, the collector too being exposed under the engine…

CLOSE-CROPPED side transmission on V-Strom: the box is soft and precise, and the kit chains origin has longevity higher than the average, especially when it is lubricated regularly, which is often the case on this machine in general followed well.

The oversize framework will not suffer that in the event of very large often fatal shock… with the rest from the machine! The suspensions, which one can judge a hair flexible, have the good taste to remain equal in the duration. It happens that the serrated roller of adjustment of the shock absorber blocks, especially on a machine which sleeps outside. Leave the WD40! 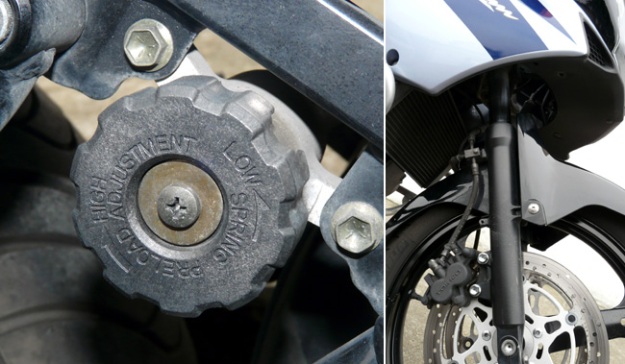 The fork can make hear a “sounded” on the large shocks, without it being prejudicial: as much knowledge! A draining of regular fork (every 20,000 km), a maintenance of shock absorber with 50,000, and it is all!
On the other hand, a very sound and awkward vibration can be made day if the spacer which supports it before tank were forgotten with the reassembly… what is fortunately rare!

The braking inherited the 1000 can miss the corrosive one with the taste more sharpened, but as for the other bodies, it is effective, and also displays moreover longevity above any suspicion.

A current breakdown, especially for the “layer-outside”, is the oxidation of certain contacts. Initially, the security of the clutch, which’s oxidized thimble will prevent from starting, quite simply! 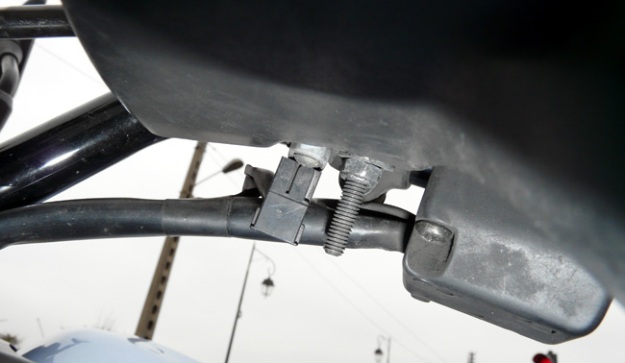 Another concern of the same kind: the brutal extinction of fires (code and headlight) while rolling! First reflex to be adopted: the inspection of the thimble located behind the radiator. To clean if need be, and V-Strom sets out again in 95% of the cases. 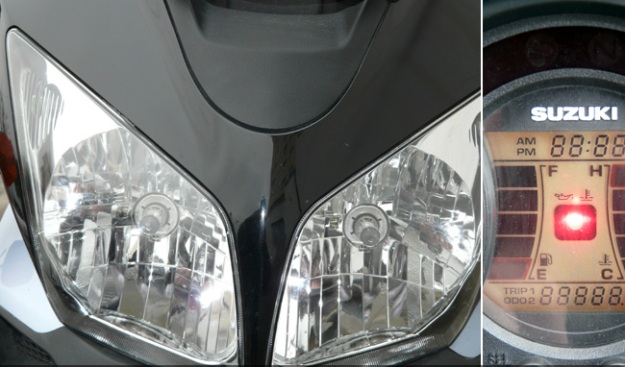 Sometimes finally, the bar higher of the gauge than petrol presents a capricious posting: nothing of alarming, it is enough to wait until the second bar dies out to recover reliable information thereafter.

Like the whole of the machine, the body does not have a major defect. Our occasion on last page for example, is nickel after 7 years and more than 50,000 km. paints and varnishes are of good invoice and support the weight of the years and the kilometers. 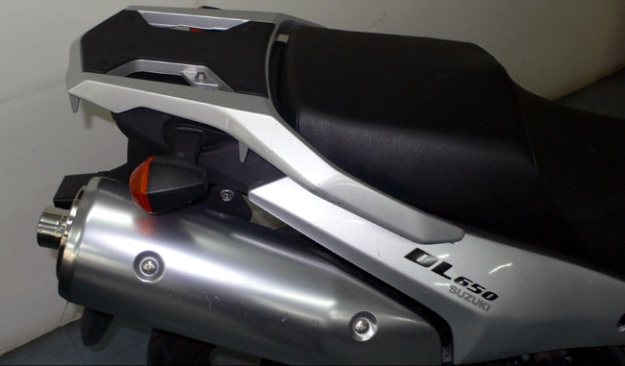 Only the legibility of the first instrument panels can lend to criticism for lack of contrast between the black bottom and the figures oranges, because for the rest, Suzuki made in simple and without ornaments, but effective one! The carry-packages of origin gives confidence and the points of anchoring of slings are well positioned. 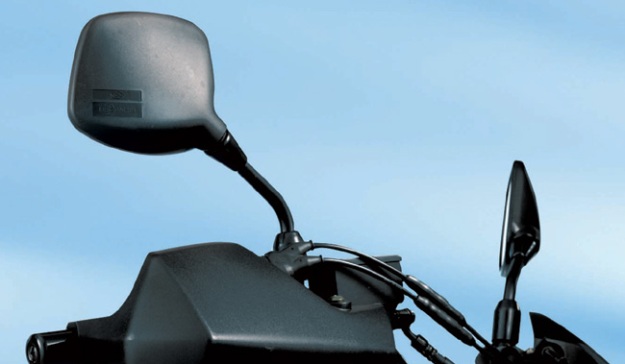 A recurring breakage is that of the plastic kneecap inside the retro. One finds oneself then with a floating mirror. Only one solution: to change the retro one!

It is seen, nothing crippling to announce on Suzuki DL650 V-Strom. If the talks are followed, it is a mounting which will go far, very far same, while keeping an aspect more than correct. 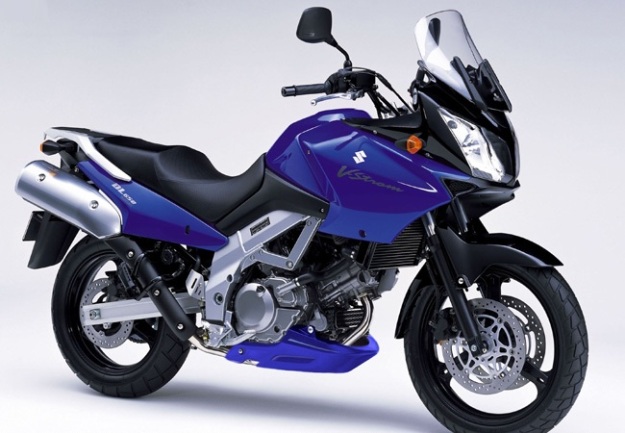 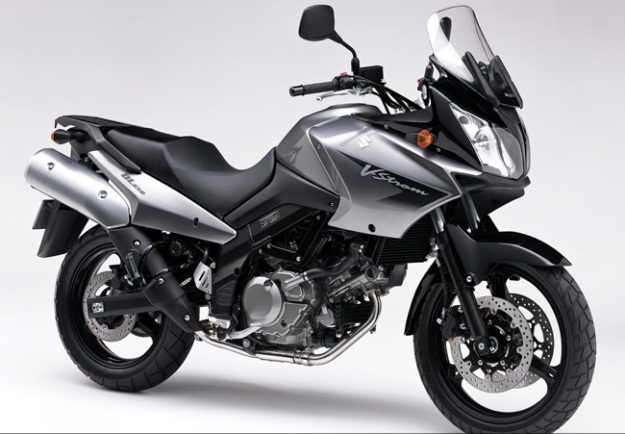 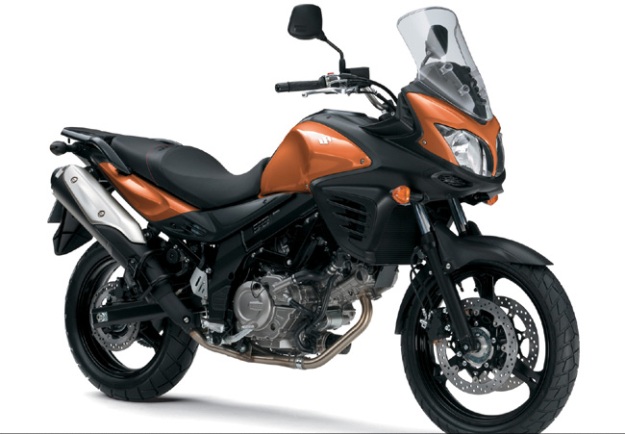 The opinion of the professionals

Motorcycle is easy to take over and to lead, including “animated” roads, Suzuki DL650 V-Strom is very comfortable in solo as in duet, charged or not. Equipped with a real versatility, it is in addition very economic on all the plans: purchase, consumption, maintenance, insurance, and hold the dimension.

Its gauge, height of saddle and width to the legs, are a handicap for the drivers (-matrices) of small size. Its insipid esthetics, even if last grinding knows a blow of young person, in fact a motorcycle often considered to be too discreet (a quality in addition side flight).
The operations without engine, as from the garage, request a certain practice, always because of the gauge. Lastly, it misses a power station (available in option) so that the table is complete… 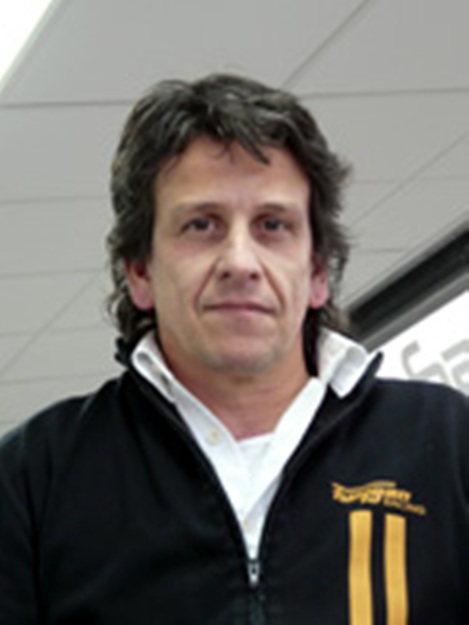 “Suzuki DL650 V-Strom is a reliable motorcycle, not very expensive with the purchase, in insurance, in maintenance, and which is resold well. It is a utility which is rather intended amd has large gauges. It deserves to be fitted well such as a Michelin Pilot Road 2. Very good machine in duet and strolls some, it is healthy and comfortable, with a potential good-natured on district distributors, in particular if it is degraded”.

“Suzuki DL650 V-Strom is before a whole very comfortable motorcycle. Even if aesthetically observed, it could be disparaged for the first model, it knew to benefit from its real qualities to allure its customers. Of course, the engine can be judged a little runs for the duet or the great ways, however it is well what the owners do with this motorcycle! It almost always remains of origin, with simply of the bag shop, even a higher bubble for the very large ones. And as everyone rolls only on road with this trail, it is fitted road tires! Lastly, there never were problems with this highly reliable machine”. 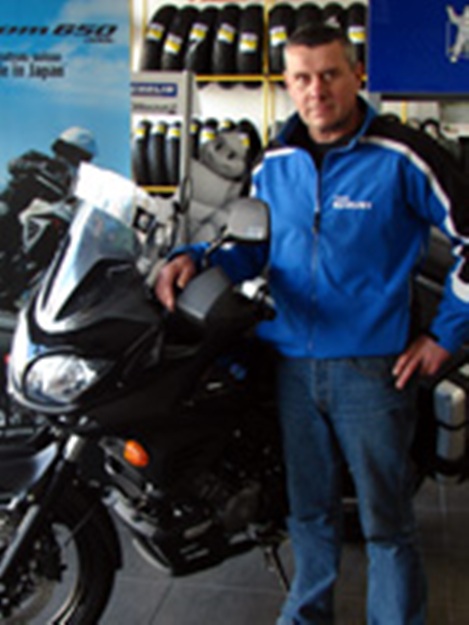 “Suzuki DL650 V-Strom is a whole motorcycle that really pass key, comfortable and which protects well. She brings happiness enduring large wheelers, which most of the time roll much more than the owners of other machines. It is a very general-purpose motorcycle, with which I made the crossing of the Pyrenees recently: that happiness on small mountain roads! One teases even in all relaxation of the machines much more sporting, so much Suzuki DL650 V-Strom is easy… It accepts a complete bag shop well without its behavior being modified by it: it is an excellent large passenger! And in workshop, it is simple: SHORT-NAP CLOTH…” 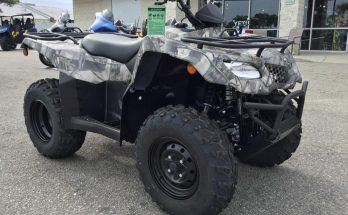 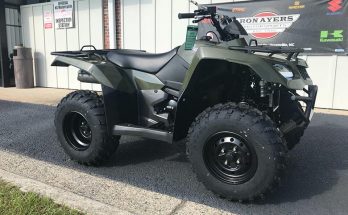 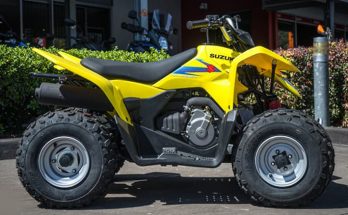