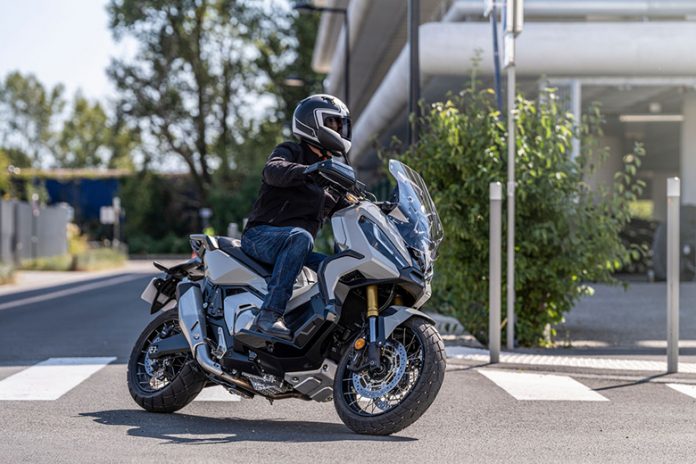 Our 2021 X-ADV Honda Adventure Bike took the initiative, broke the records, and led the industry with its classy features. It’s a two-wheeled SUV that defies convention by combining the powers and performance of an adventure motorbike with the comfort, convenience, and commuting ability of a large-capacity scooter. The X-ADV is a luxury urban explorer capable of jumping from city block to off-road path (and back) instantly, making every ride a unique experience. And we’ve improved every aspect of it. 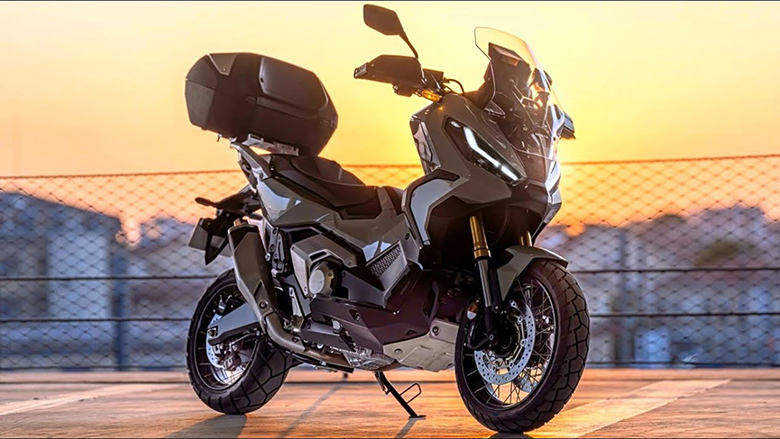 The X-liquid-cooled ADV’s SOHC 8-valve parallel twin-cylinder engine is designed to deliver snappy performance in the low-to-mid-range. Its comparatively long-stroke design and specifically shaped combustion chambers work in tandem with the high-inertial mass crankshaft to provide enormous quantities of accessible torque at low rpm. A forward cant lowers the center of gravity for maximum stability; thanks to the 2021 upgrade, it is now 1.4kg lighter than before.

The engine creates more power and revs harder for longer, thanks to a perfectly balanced 5% adjustment in valve duration (which varies between the two cylinders), as well as the inclusion of Throttle By Wire (TBW) and exhaust upgrades. Along with the increased power, it also has a higher torque output of over 5,000rpm. 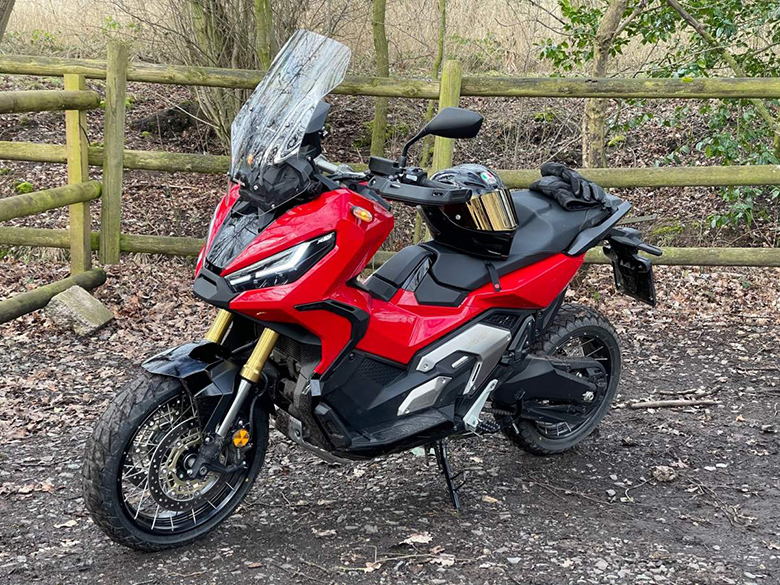 Peak power is increased by 3kW to 43.1kW at 6,750rpm, with maximum torque at 4,750rpm. Shorter gear ratios over first, second, and third gears go hand in hand with the performance rise, enhancing standing start and roll-on acceleration through each gear. The 2021 X-ADV Honda Adventure Bike will cover 20m in 1.7s, 50m in 3.2s, and 60km/h with the torquey engine rotating at just 2,500rpm. The bigger gears, i.e., fourth, fifth, and sixth gears, have been slightly raised to enhance fuel efficiency and allow more flexible use of the more excellent power figure.

Twin balancers dampen vibration caused by higher rpm inertia without interfering with the engine’s erratic firing sequence and 270° phased crankshaft. The bore and stroke dimensions are 77 x 80mm. When feasible, components are designed to perform several functions: the camshaft powers the water pump, while one of the balancer shafts operates the oil pump. By reducing the number of parts, the engine remains light, efficient, and dependable.

The 2021 X-ADV Honda Adventure Bike engine consumes gasoline slowly, with a recorded consumption of 27.8km/l (WMTC mode) and a possible range of 366km from the 13.2-liter fuel tank. It is also now compatible with EURO5 rules, which went into effect on January 1, 2020, and set much tighter engine emissions criteria than EURO4. These criteria include significant reductions in allowed carbon monoxide emissions, a 40% reduction in total hydrocarbon emissions, harsher misfire detection, and implementation of a particulate matter restriction. 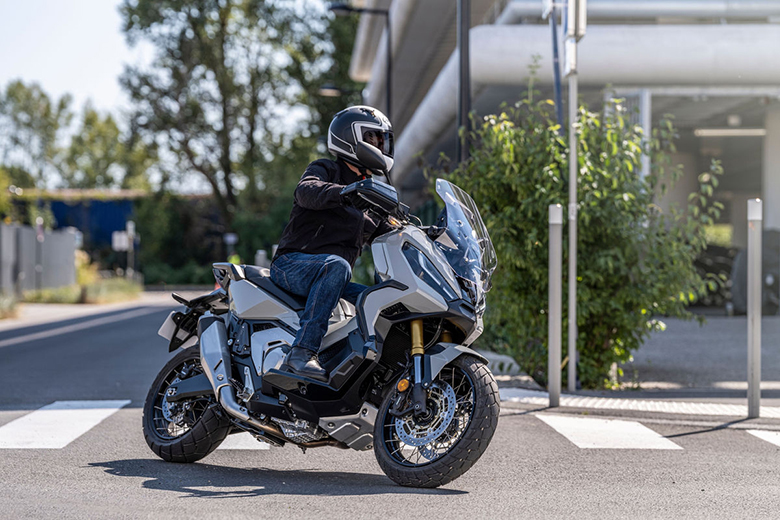 The X-distinctive ADV’s appearance, conceptualized and developed by Honda’s R&D team in Italy, has been sharpened and streamlined extensively for 2021. The profile is purposefully upright, yet each body panel has been re-chiseled to achieve a sharper, more powerful intent. A side-by-side comparison with the previous generation demonstrates how sensitive the new style has become. Stronger, more assertive, and colder. Simply put more 2021 X-ADV Honda Adventure Bike. The redesigned dual LED headlights now have Daytime Running Lights (DRL), which automatically adjust to ambient light intensity and provide bright, evident light, increasing safety. The illumination is all LED.

Regarding ergonomics, the 820mm seat height and 910mm broad handlebar offers a high eye point and excellent sight, while the seat boasts re-shaped, thinner shoulder contours for easier ground reach. The X-redesigned ADV’s screen adjusts without tools through 5 levels from low to high to maximize or minimize airflow when commuting or touring. With an 11° rake between the highest and lowest locations, the overall height difference is 139mm.

The innovative Honda Smartphone Voice Control System, which connects the rider to their smartphone while on the road and provides voice management of phone calls, email, music, and navigation, is integrated into the X-rider ADV’s interface and displayed through the 5-inch TFT display. A helmet-mounted headset is required, and the smartphone connects to the dash through Bluetooth; system administration is also available via buttons on the left switchgear.

Tough plastic hand shields deflect wind and rain while protecting hands and levers from stones when riding off-road. The underbelly is covered with a shot-peened 2.5mm thick aluminum bash plate. 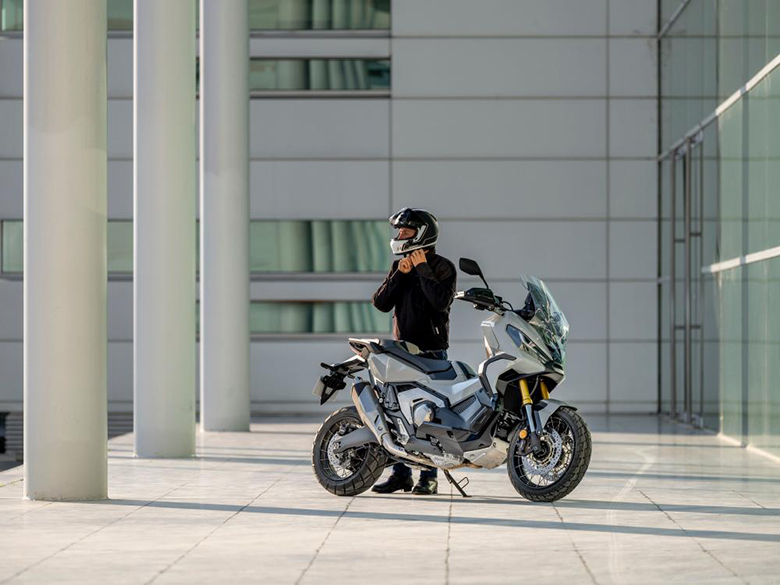 The under-seat baggage capacity expands by 1L to 22L, allowing for a full-face helmet, and is lighted by an inbuilt LED with a textured surface that provides consistent illumination without glare. The car-type 12V ACC plug has been replaced by a USB charging socket, which is positioned at the back of the compartment. The parking brake has been relocated from the right fairing to the right handlebar, making room for a handy and easily accessible glove compartment. A tilt sensor-equipped center stand is standard, allowing the 2021 X-ADV Honda Adventure Bike to be parked on an incline without the risk of tipping over.

The 2021 X-ADV Honda Adventure Bike features a Smart Key, which sits in the rider’s pocket and eliminates the need for a key for the ignition, fuel cap, and seat. With the Smart Key present, one press of the knob-style central switch powers it up and allows it to turn, allowing the rider control over the ignition/steering lock and the fuel cap and seat through two rocker switches. It also offers an ‘answer back’ function that flashes the indicators for easy identification from a distance, as well as locking and unlocking the optional Smart Top Box. A clutch mechanism in the primary switch prevents the handlebars from being forcefully opened.

Honda’s engineers began with the tubular steel diamond frame for an invisible – but significant – advancement of the X-chassis ADVs and, through a careful redesign using varying tube thicknesses and weight, not only saved 1kg over the previous frame but also freed up more usable space for the storage compartment.

The 41mm cartridge-type USD fork adjusts for spring preload and rebound dampening to handle rugged terrain. The spring preload-adjustable rear shock is a solo tube split pressure design that uses Pro-Link to control the aluminum swingarm, which is made up of a machined-hollow cross member and U-shaped (in cross-section) arms.

The stainless steel rust-resistant spokes on the 17-inch front wheel and 15-inch rear tire add to the X-capacity ADVs to gently soak up rugged terrain. Block-pattern tires improve ride quality, while L-shaped valve stems make it simple to monitor air pressure. The front and rear tires are 120/70 R17 and 160/60 R15. 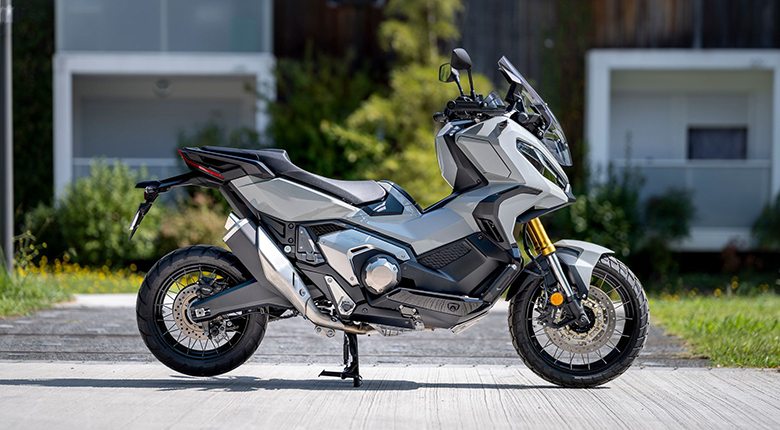