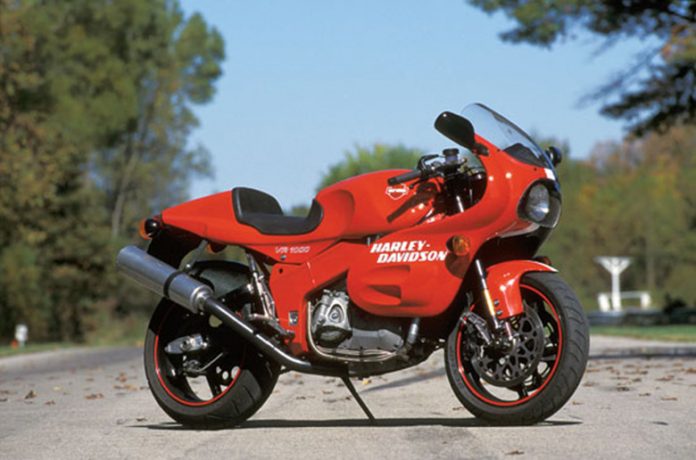 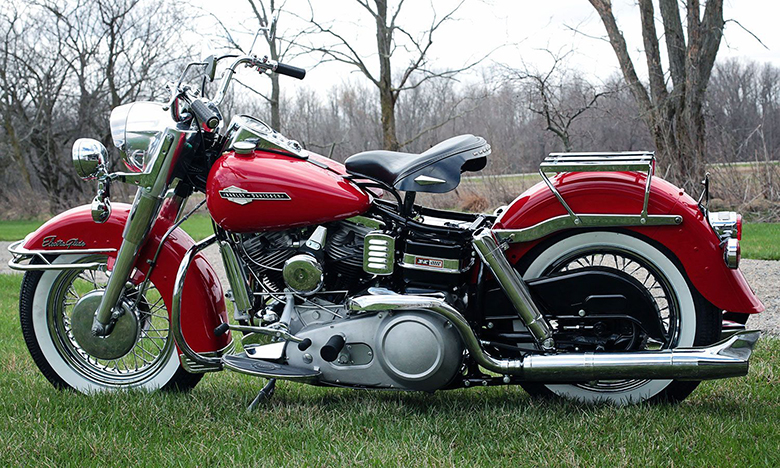 For most of its production in 1965, Harley-Davidson was producing its ‘Panhead’-engined big-twin tourers and its smaller Sportsters. The first ‘ElectraGlide,’ which reflected that it was the first with an electric starter, was introduced back in 1965 as an upgrade to the DuoGlide, which had been dubbed in 1958 for its revolutionary rear swinging arm suspension. A bigger fuel tank and upgraded 12v electrics were also added. In response to the increased popularity of consumers outfitting their motorcycles with aftermarket touring gear, however, a new accessories package containing hard panniers and a touring screen was introduced. In 1969, the screen was changed to the now-iconic ‘Batwing’ fairing due to this success. Later, they were made standard in 1971. 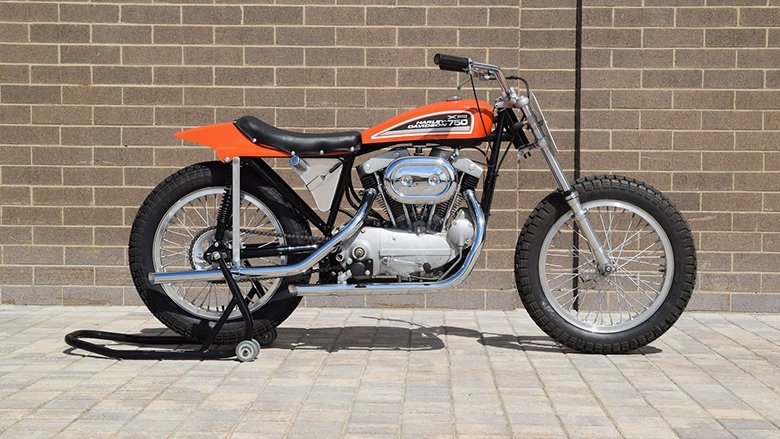 With its side-valve KR750s in the 1950s and ’60s and later because of restrictions limiting overhead-valve competitors to 500cc, Harley has a long and successful history in American flat track racing. This restriction was repealed in 1969, prompting Harley to develop a new, purpose-built racer, the XR750. ‘Shorter stroke versions of the 883 Sportster were based on this. However, overheating issues necessitated the introduction of a redesigned aluminum head version in 1972. Since then, the machine has dominated American flat track racing, winning 29 of the 37 championships up to 2008. 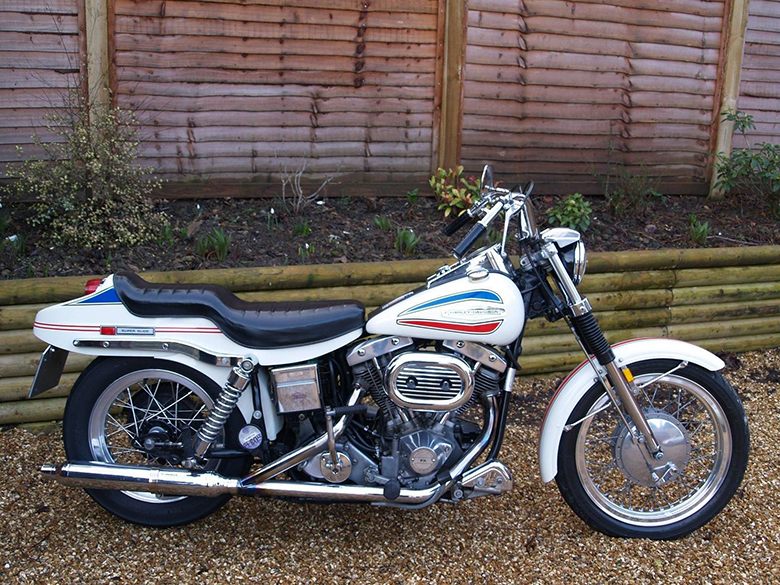 The 1971 Super Glide, despite its controversy and lack of sales success, is recognized as being the first “factory custom” motorcycle. Willie G. Davidson, Harley’s head of design at the time, was inspired by the success of the 1969 film Easy Rider and the rise in popularity of custom motorcycles, which sometimes combined pieces of one bike with those of another for stylistic purposes. In this way, he combined the large engine and wide back tire of a Harley FL Glide with the short forks and narrow front tire of a Harley XL Sportster, giving rise to the name “FX.” Because it was so controversial, Harley had to revise the design of its ‘boat tail’ rear fender/mudguard for its second year. 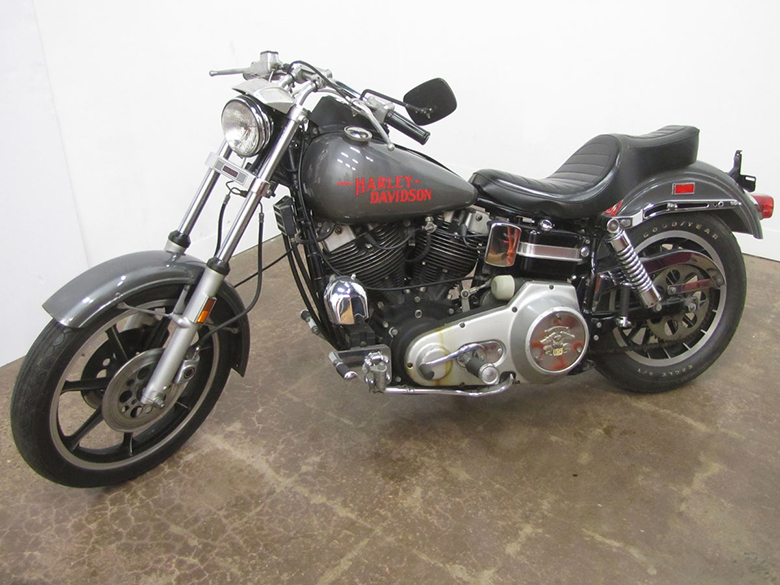 That failed attempt at a cruiser, Willie G’s 1977 Low Rider, was Harley-first Davidson’s great cruiser success and put the company on a new course for touring and cruisers, which it hasn’t wavered from since. Harley’s ‘Shovehead’ big twin was the power source for the Low Rider’s kick-out front end, narrow front wheel, front foot controls, stepped seat and two-into-one slash-cut exhaust – all of which made it a popular choice for female cruiser riders. In its first year on the market, it sold more than every other Harley-Davidson model combined. The XLCR café racer was one of Harley-most Davidson’s ill-advised and disastrous projects of 1977. 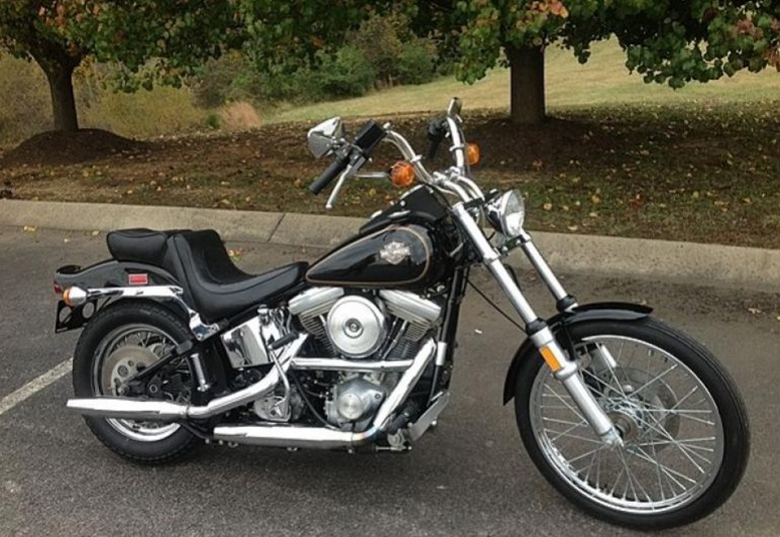 For Harley-Davidson, the 1980s were a period of upheaval. Under the dubious ownership of AMF, the 1970s had been a period of underinvestment and decline, and its US market share had declined from 75 to barely 25 percent in the face of increased competition from Japan. When CEO Vaughn Beals took over the firm in 1981 with the help of 12 other directors, he immediately revived it. The Harley Owners Organization (HOG), the world’s biggest factory-sponsored motorcycle group, was established in 1983 as one of the initial innovations. The 1984 FXST Softail Softail launched the all-new, alloy ‘Evolution’ engine, which was significantly more dependable and powerful than the previous iron Shovelhead, and displayed Harley’s new ‘hidden shock’ Softail frame which gave its cruisers an even more realistic hardtail-style appearance. 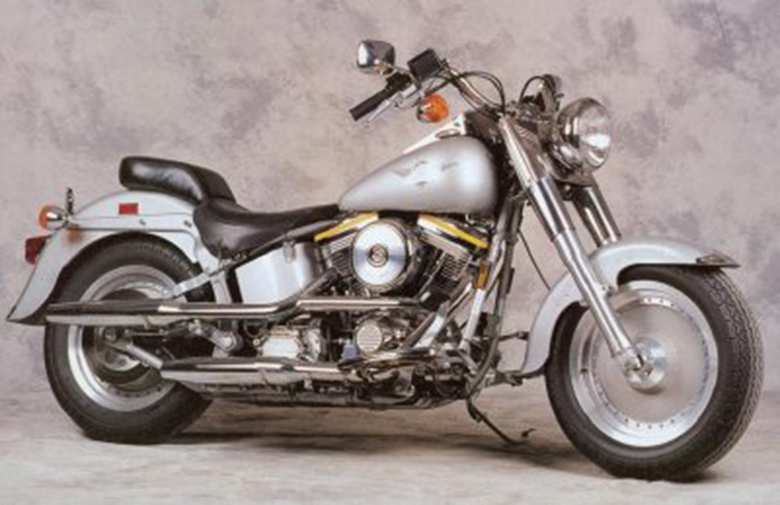 Following the 1984 FXST’s successful introduction of the Evolution engine and attractive Softail chassis, as well as the tremendous popularity of the Heritage Softail’s 1950s aesthetic, Harley-Davidson design head Willie G. Davidson opted further to explore minimalist, industrial, throwback ’50s style. Louie Netz and his co-designer started with a Heritage Softail as their starting point and replaced the bike with an ultra-clean and basic design with a bold, straightforward style. As a result of Willie G riding a prototype from Milwaukee to Daytona to see how the public would react, the Fat Boy was perfected and launched in 1990. It was an immediate hit, thanks partly to its appearance in the 1991 blockbuster film “Terminator 2,” which further cemented its cult status. The Fat Boy has remained one of Harley-most Davidson’s popular models ever since. 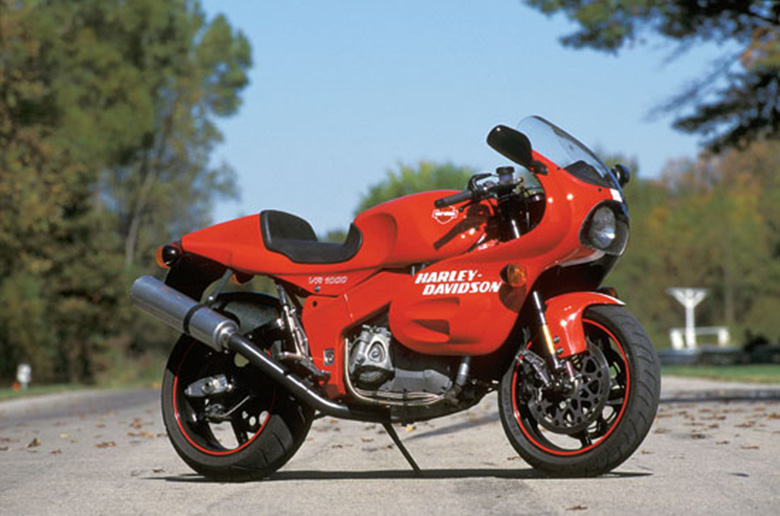 Who said Harley-Davidson couldn’t produce high-end sports cars? Now is the perfect moment to recall that H-D has already built high-performance, liquid-cooled twins in this class. Some of those who doubted Harley’s 1994 VR1000 superbike, with its 135bhp and top-notch chassis, will be dispelled by this. When the VR was designed, it was intended to compete in American AMA Superbikes as a homologation-specific superbike with a liquid-cooled, fuel-injected, and a short-stroke DOHC engine with a 60-degree swing arm and an aluminum twin-spar perimeter frame. Only 50 units were produced (because of the lengthy homologation process), each costing $49,950. It was supposed to go on sale in 1990. Therefore the odds were in its favor. The Harley-Davidson VR’s 135bhp was already behind the curve when it debuted in 1994 owing to internal politics. It also has some growing pains. 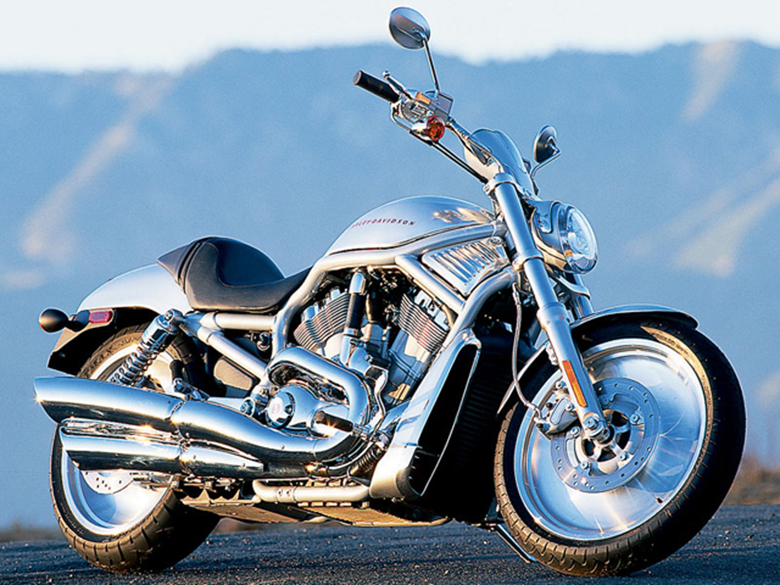 V-Rod was supposed to usher in a new age for Harley – but it didn’t exactly work out that way, like the Pan America. Concerned that the time for Harley’s old, pushrod, air-cooled V-twins was dwindling, the VR1000 superbike served as an inspiration for the V-Rod, which featured a completely new, 60-degree liquid cooling and fuel injection DOHC V-twin. The body panels were brushed aluminum and affixed to a pressure water-formed tubular steel chassis. In addition, the V-Rod had the potential to be the Ducati Diavel of its day, with 115bhp and Brembo brakes to stop it. Except that was never precisely how it went. The V-Rod was never a commercial success, despite several modifications and model variations, including the Street Rod, Night Rod, and V-Rod Muscle, throughout its 16-year career. It was too heavy and prolonged to give actual sporty handling, and it also failed to win over typical Harley purchasers. 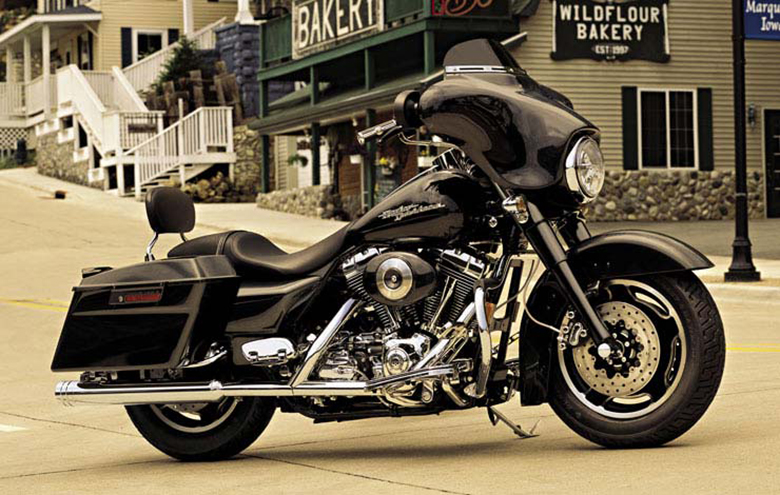 Many (especially in the UK) derided the Street Glide in 2006 as an ElectraGlide cut down and made less valuable. It’s tough to believe that was the case anymore. At its introduction, we didn’t realize that it would become Harley’s most popular model. According to lore, when the second generation of the Harley-Davidson was unveiled in 2012 with its distinctively wider custom-style front wheel, it was the best-selling motorcycle in the United States, selling more units than all other motorcycles imports combined. 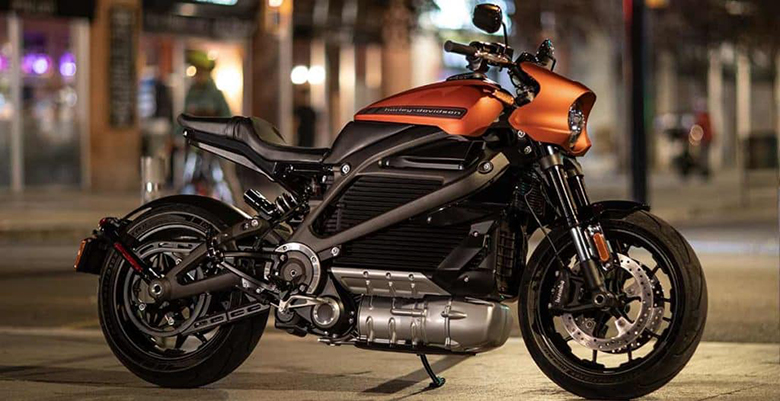 While the LiveWire electric bike from Harley-Davidson has yet to prove a commercial success, it deserves a lot of credit for taking a risk that other major manufacturers have been afraid to take. It is a high-tech, effective, and generally impressive foray into electric bikes. It is a risk that no other major manufacturer has been willing to take. Although the price is over $30,000 and its usefulness and usability are yet unproven, the product has so far only appealed to early adopters and tech fanatics.

This article is about the Top Ten Revolutionary Harley-Davidson Motorcycles, and we hope that our readers agree with our efforts that the bikes mentioned in the list are the ones that are known as a trendsetter in the market.