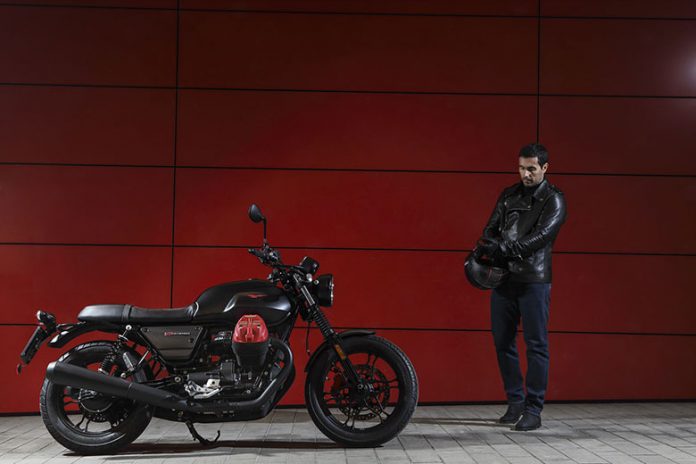 The color features brand new water repellent Alcantara®, excellent for outdoor usage and weather resistance. The V7 III Carbon has a fully matt black appearance, a hue that highlights the sections in red. The crimson stitching on the saddle is a widespread aesthetic influence that everyone who appreciates fine details will understand. This model comes with them all: the locking tank cap is made of anodized black billet aluminum, as is the headlight frame, injector covers, and the rear brake master cylinder. 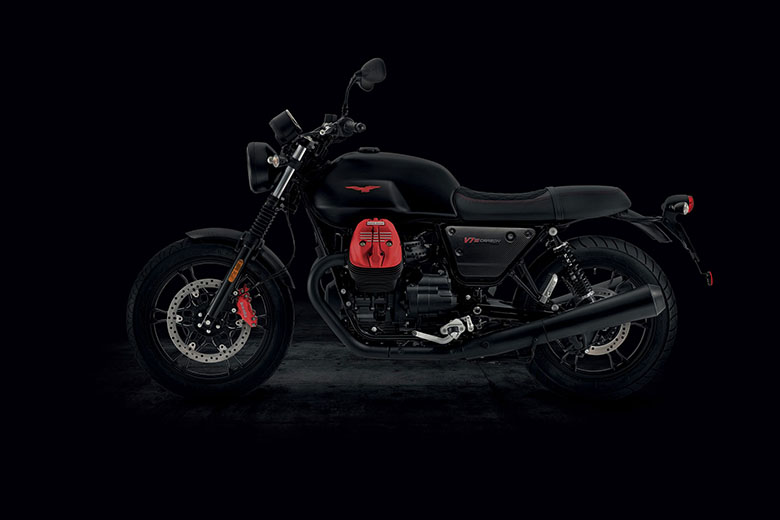 The Moto Guzzi motorcycle entry-level model will continue to be the third generation of Mandello’s “seven-fifty.” It features a powerful and original character, characteristic of all Moto Guzzi bikes, much of which is shown by the transversal V-twin powerful engine, a one-of-a-kind arrangement. It is straightforward to ride and one of the most favorite motorcycles in terms of dimensions. The fundamental driving forces behind its improvement were style, standard equipment, and incredible road performance, in other words, features that impact the enjoyment of owning and riding a V7.

The Moto Guzzi 2020 V7 III Carbon Street Motorcycle keeps the model’s aesthetic individuality, with a form that communicates with the shapes inspired by Moto Guzzi tradition while still meeting current bike standards. The presence of twin-pipe exhaust manifolds and the engine heads, both with large proportions, delivers the feeling of being in the existence of a mature and strong motorcycle, despite the Moto Guzzi 2020 V7 III Carbon Street Motorcycle offering to be one of the most approachable and streamlined bikes. The new metallic fuel tank, on the other hand, has remained unchanged, with its unique 21 liters of carrying capacity and appearance inspired, as always, by the spectacular 1971 V7 Sport. Also striking out for their elegant form are the injector covers and side fairings with their slim contour.

Each Moto Guzzi 2020 V7 III Carbon Street Motorcycle features its new saddle, complete with distinct graphics and coatings. V7 III Stone and Rough use a single circular instrument display, following their reputation as necessary bikes. All other information is made available in the digital box, including the odometer, partial and daily trip, trip time, immediate and average consumption, average speed, air temperature, and the MGCT level, as well as the engaged gear indicator, for which the user can adjust the maximum and minimum rpm value. You may manage a specified engine rpm range in this manner, for example, to operate the bike as efficiently as possible or to decrease fuel consumption to a minimum. The right-hand electrical block has a rider’s button to interact with the equipment.

Moto Guzzi brand is known for its ability to make unique chassis. The Moto Guzzi V7’s enjoyable ride dates back to 1970 when the Moto Guzzi V7 Police was chosen to join the LAPD squad following a rigorous set of tests, founding the Larian brand’s expertise on the subject even internationally. The strong steel frame holds the double-cradle tubular layout and the same weight distribution (46 % front; 54 % rear) as previous Moto Guzzi V7 generations; however, the third generation contains an entirely revamped and reinforced front end with diverse steering geometry to guarantee awesome dynamic performance through the turns, as well as better handling and stability. The careful care and finish of the details, particularly the welding and painting, has received particular attention. The rear suspension system is included a pair of Kayaba shock absorbers that are spring preloaded and give a progressive and controlled reaction in every condition, even while riding two-up, owing to their excellent quality and the inclination of the mounting point to the frame. 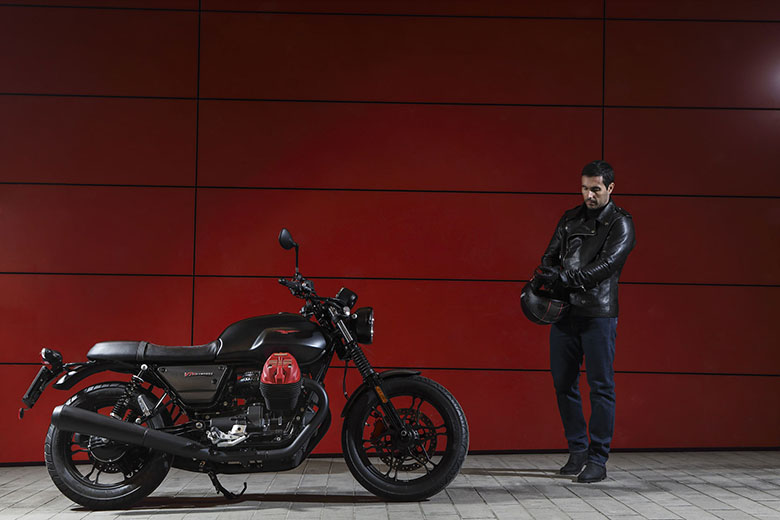 There are many brilliant twin-cylinder engines in the world, but only one transverse V-Twin engine, and that is the Moto Guzzi twin, who was born in 1967 thanks to Giulio Cesare Carcano’s brilliant intuition and is famous for a unique cylinder configuration that became an integral part of the bike’s design, like a truly modern art metallic sculpture. It has extended its third iteration in the minor block variant. It has been reshaped compared to the unit that powered the Moto Guzzi V7 II to increase riding enjoyment while improving performance and dependability.

The new aluminum crankcase, strengthened at its core points, uses a crankshaft having calculated inertia to ensure a pep and a good engine brake. The new crankcase lubrication system is intended to disperse heat as efficiently as possible and reduce power absorption, resulting in better performance and lower fuel consumption. A brand new ventilation system and a lower capacity oil pump can absorb less power stop power loss due to interior pumping of the crankcase chambers. The new oil pump intake duct is unique, as is the related by-pass valve, and piston cooling oil jets, including management valve and flow control, have been added. The blow-by gas yield is positioned on the alternator lid.

The changes made a year ago also artificial the top end of the engine, with totally new aluminum cylinder heads, cylinders, and pistons in comparison to the V7 II, despite the Stroke and bore, and thus the engine displacement, remaining the same, confirming the Moto Guzzi 2020 V7 III Carbon Street Motorcycle’s position as a Moto Guzzi entry-level bike range. Timing is controlled by a new pushrod and rockers system, including two valves per cylinder. However, they are positioned in an angled position in the head. The new dual pipe manifolds are used in the exhaust system that helps in thermal insulation. The Moto Guzzi twin 750 meets the Euro-4 criteria thanks to the auxiliary air system intake, the double lambda probe, the trivalent catalytic converter, and the engine architecture.

At 6200 rpm, the supreme power is 52 hp. In comparison, the ultimate torque is 60 Nm at 4900 rpm, with a flat torque curve that potentials simplicity of use paired with that characteristic Moto Guzzi character and swift reaction. An all-new limited-power version is also available, following the restrictions enforced by the A2 class driver’s license, and is unsettled for beginning riders who can benefit from the Moto Guzzi 2020 V7 III Carbon Street Motorcycle’s overall dimension, as well as the overall ease in riding. The Moto Guzzi engine also has a 170mm dry single disc clutch, which improves durability and dependability over time while reducing the strain on the lever at the handlebar, all to the benefit of mouldability and riding pleasure. The six-speed gearbox, which is accurate and flat in shifting, is identical to the V7 II, but it now has a slightly longer first and sixth gear ratio that is helpful for improved using the engine’s torque and power capabilities. 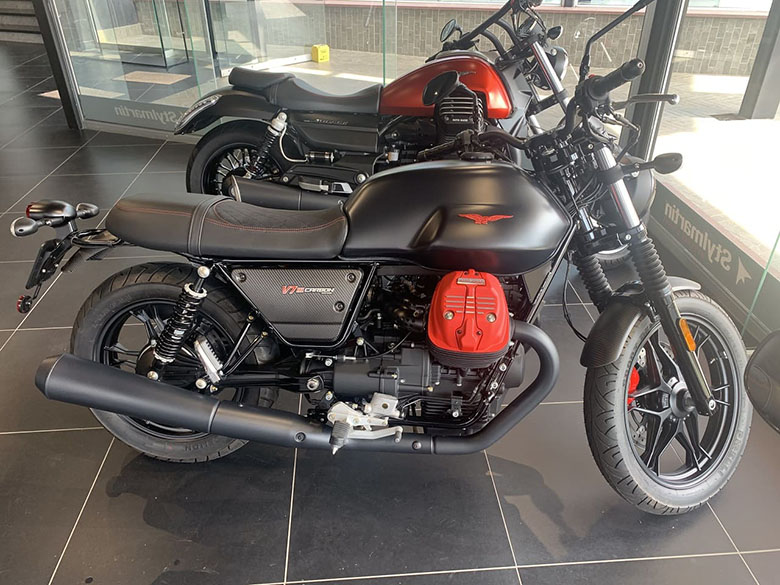 When it comes to safety, the Moto Guzzi brand has always been at the top of its game. The new ABS braking system of the Moto Guzzi 2020 V7 III Carbon Street Motorcycle is adjustable, and the MGCT system may easily be turned off.

The first is a new two-channel Continental system that maintains the bike’s wheels from locking up, while the second is a system that retains the rear wheels from spinning during abrupt acceleration.

The MGCT system comes with two sensitivity settings, one that is more appropriate and conservative for low grip circumstances such as slick asphalt or wet, and the other that is built for the excitement of riding safely on dry roads. Another feature of the MGCT system is the ability to re-calibrate the rear tire circumference to compensate for wear or the usage of a tire with a different profile than the original, ensuring that traction control remains exact.