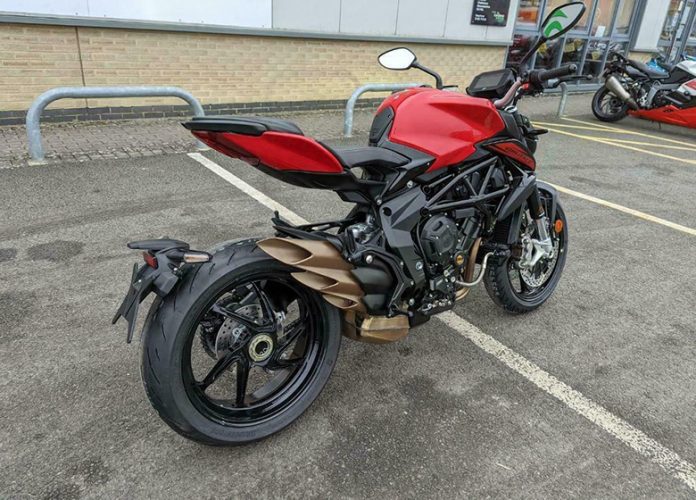 The 2022 MV Agusta Brutale 800 Rosso Sports Bike gives regular riders access to top-notch racing technology. This powerful little stoplight burner weighs just over 400 pounds and over 100 horsepower. It also has a robust set of electronics to help you keep it in check. The package is complete with aggressive, edgy lines and a sporty look.

The MV Agusta Brutale Rosso isn’t advertised as a pure-D racing bike, but it’s still a crazy-fast bike that deserves respect. A lot of its features have to do with the engine, which is a water- and oil-cooled, in-line triple that is mounted across the frame. It is also shot in black, so it almost blends in with the black hole under the tank.

There is racing tech in the cases. When the engine speeds up, the counter-rotating crankshaft pulls the front end down to keep the front contact patch in place.

Dual overhead cams control the timing of the valves. Each cylinder has four poppets, and the followers are treated with Diamond-Like Carbon to make them last longer. Having a bore of 79mm and a stroke of 54.3mm, the engine has an over-the-square shape that gives it a displacement of 798 ccs and a compression ratio of 12.3:1.

The 2022 MV Agusta Brutale Rosso has a power output of 112 horsepower and a torque output of 62.6 pound-feet. 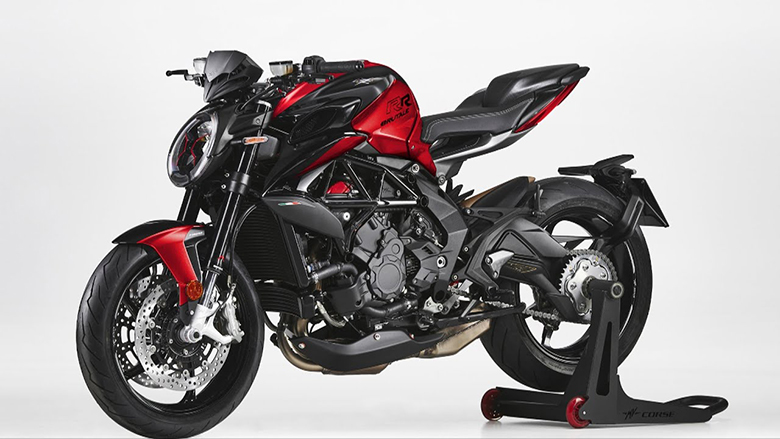 All that power goes through a slip-and-assist clutch first and then through a racing-style six-speed cassette-type transmission with an up-and-down shift-assist feature to make sure no shifts are missed.

As for electronics, the Brutale Rosso has a big package that starts with ride-by-wire throttle control and MV Agusta’s Motor and Vehicle Integrated Control System for overall management. A feature called “Torque Control” lets you change how much power you get. You can choose from four different “mappings” to fit any situation. For the controls under the hood, the Traction Control system has eight levels of how it can help.

This machine is a well-designed mass of mechanical muscle that doesn’t waste a single ounce on unnecessary bodywork and gimmicks. The Brutale line looks like a sprinter crouched at the starting line because the back end is slim and the visual weight is in front.

Up front, the fender is probably the smallest I’ve seen on a mass-produced bike. It’s engineered for low-drag penetration with a built-in spoiler effect in the slotted uprights.

A cyclops headlight has a DRL ring for safety during the day and LED lightbars for the turn signals. An old fly screen finishes off the sharp look on top that protects the instrument display in the back.

The first real sign that this bike isn’t just made for racing is that the handlebars aren’t flat. It makes a more comfortable riding position than you can get with a clip-on.

Ram-effect intake ports sit on the shoulders in front of the fuel tank’s strong flanges and narrow waist, which let you do even the most extreme body English moves. It permits you to drag your knee, you beautiful maniacs.

The pilot’s seat is 830 mm (32.68 inches) above the deck, which is a bit high for short people but not surprising given how the ship is built. It has a pillion pad and foot pegs that fold up so that one brave passenger can ride on it.

The end of the tail is where a high and tight taillight sits, well out of harm’s way. The back end is clean because it doesn’t have a mudguard. Instead, it relies on the hugger on the swing arm and the belly pan on the subframe to keep the mud out.

The hole under the pilot’s butt is a superb detail. I don’t know if it’s just for looks or if it keeps your nethers from getting too hot, but it’s there.

The Brutale Rosso’s Trellis frame is made up of steel tubes. It doesn’t stand out very much because the blackout paint makes everything look identical.

The single-sided swing arm is made of light aluminum and has pivot plates that reduce both the weight of the springs and the weight of the rest of the bike, which helps the rear suspension. It makes it soft and quick, just like a real race bike should be. 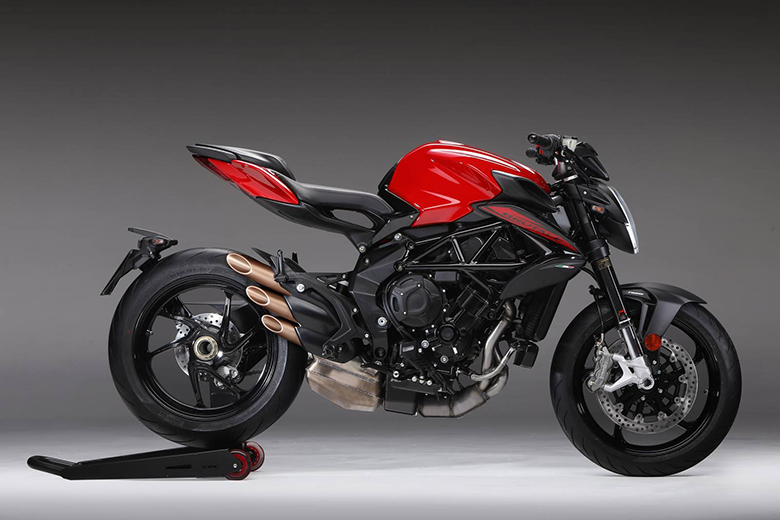 USD Marzocchi forks with 125 mm (4.92 inches) of travel and 43 mm tubes let the front end float. Back there, the 130 mm (5.12 inches) travel on the Progressive Sachs monoshock takes care of business. Both ends get the complete set of three changes, so you can get your ride just the way you want it.

This bike has a lot of speed, so it also has a lot of stopping power. Two 320 mm discs and four-bore Brembo calipers are in front of a 220 mm disc with a twin-pot Brembo anchor. Continental’s MK100 unit is what gives the car its ABS. It protects corners and has a Rear Wheel Lift-up feature that reduces skidding when brazing hard.

The rolling chassis is finished off with a set of cast 17-inch wheels in a 120/70 ahead of a 180/55. The rubber has a “Z” speed rating, which means it can handle anything you throw at it.

Since Ago Red over black is the only colorway this year, I’m not blown away by the choices. Still, the finish looks sharp, which goes well with its spicy flavor. The price of the MV Agusta Brutale Rosso for 2022 is €13,400.

The Monster acts the same way—naked and aggressive—and even when it’s not moving, it looks like it’s going fast. These two bikes are like sisters from another father. The Duc has its tiny front fender with the same headlight/DRL arrangement and a small fly screen on top.

The Monster looks a little bit slimmer around the engine. It is primarily because of where the two exhaust headers are, but only one is visible from the front. The rear exhaust pipe will be close to the mono-shock, but a heat shield will help keep the shock from wearing. 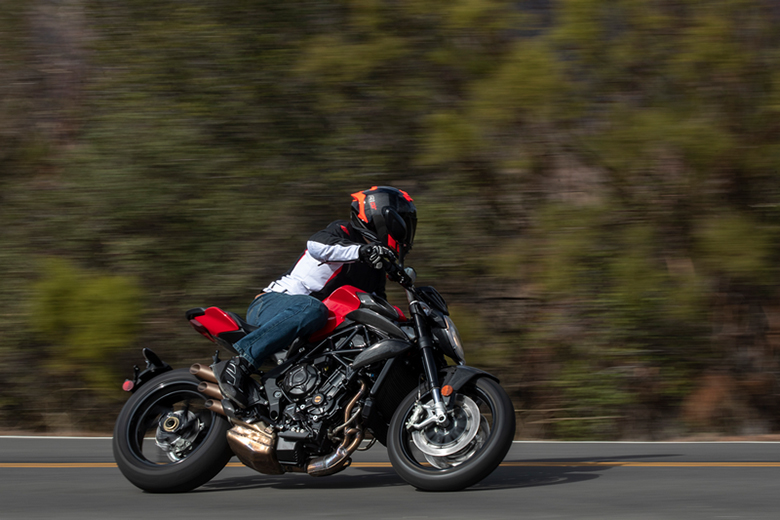 The plate and blinkers on the Duc are mounted in a way that reminds me of a mudguard, so the back of it isn’t relatively as clean as the back of the Brutale. The power comes from a 937 Testastretta L-Twin engine with 111 horsepower and 69 lb-ft of torque. Compared to 112/62 on the Brutale, it’s a slight difference that won’t appear on the old heinie dyno.

In general, electronics are also pretty similar, so there isn’t much to choose between. Price is a different story, though. The Ducati Monster costs €10,701, which leaves a lot of money on the table compared to the sticker price of the Brutale. 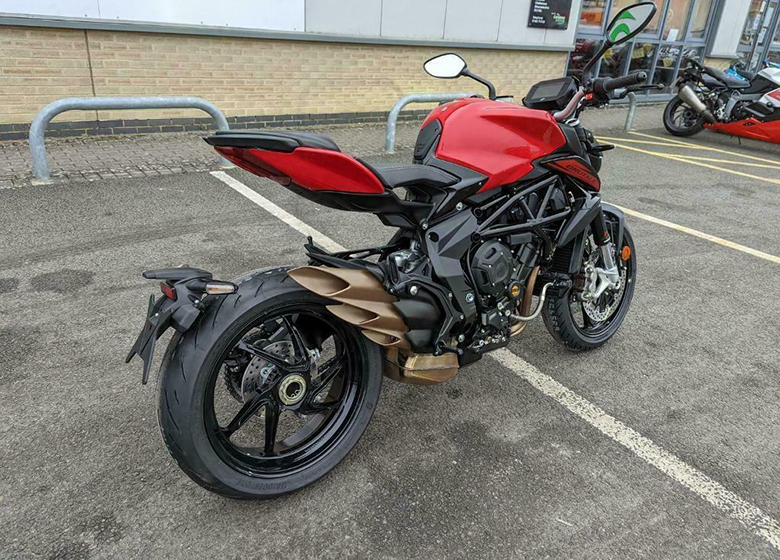