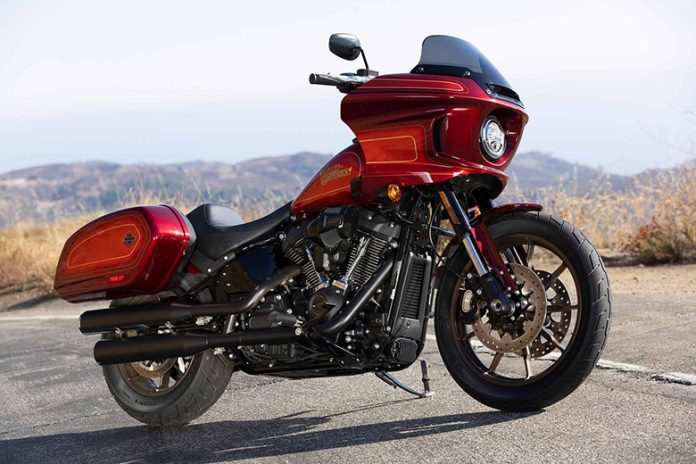 The El Diablo Low Rider is a model designed to push the boundaries of fashion and sports touring performance. The Harley-Davidson Softail Low Rider “El Diablo” model from 2022 combines the tight handling skills of the Softail with the touring capabilities of hard luggage and frame-mounted fairing. It is based on the 1983 fixed-fairing FXRT and has similar bullet fairing and hard-side panniers for some storage. A Rockford Fosgate audio system and bespoke paint complete the package. Chassis with the V-Twin muscle of a Milwaukee-Eight 117 engine. The model will be made once, with 1,500 serialized units expected to arrive at authorized Harley-Davidson dealers in the fall of 2022.

The 2022 Low Rider El Diablo is a modern rendition of the classic 1983 Harley-Davidson FXRT, as well as a symbol of the custom movement that it started and continues to feed. It portrays the counterculture of Southern California in the 1980s in contemporary packaging that incorporates carefully created bespoke paint and Rockford Fosgate high-performance audio, each individually serialized. 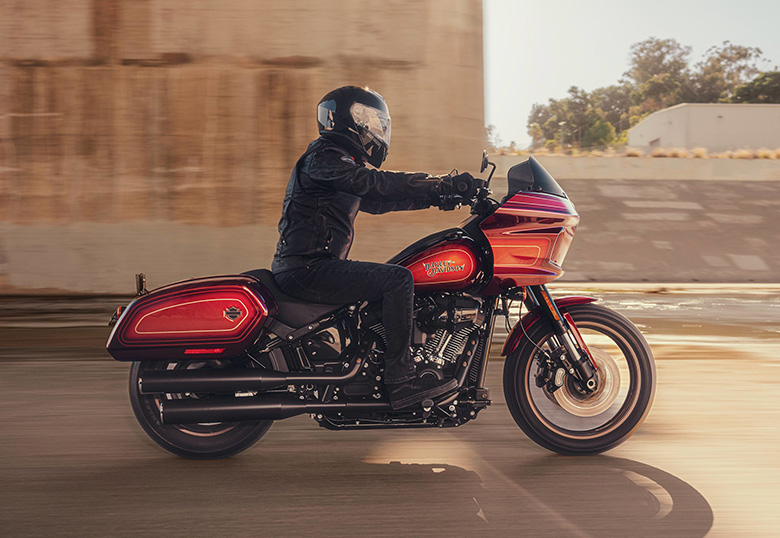 The powerful Milwaukee-Eight 117 engine is put in the El Diablo because Harley-Davidson didn’t skimp on the power plant. The Low Rider El Diablo produces 103hp and 125lbft of torque. Although the maximum torque is generated at 3,500 rpm, most of it is accessible lower in the rev range, indicating that this engine is ready to go as soon as it spools up.

In the nosecone, like previous Big Twins produced before the Twin Cam period, just one central camshaft is placed. The four-valve heads are operated by hydraulic lifters and pushrods that move through the outer tubes.

This mill features a long-stroke layout, typical of H-D, with a bore of 103.5mm and a stroke of 114.3 mm. It yields a 1,923cc displacement and a middling 10.2-to-1 compression ratio, allowing it to operate well on mid-grade gasoline.

The engine’s power is delivered via a wet clutch, a six-speed gearbox, and a belt and pulley final drive with a chain-type main drive. The combined powertrain limits the Low Rider El Diablo’s top speed to 107 MPH.

With no traction control or drag torque mitigation, the module and throttle grip are the engine’s only controls. Because they aren’t even available as options, you should expect a very rough ride with excellent feedback and uncomplicated handling.

The MoCo went to its past for the El Diablo design, and I must admit, I think it’s a true peach of a sled. I might be biased because I owned a 1989 FXRP police special that looked similar to this. Custom components blend with an antique aesthetic on the new Softail frame. The old Softail frame was replaced by the new frame, followed by Dyna, which replaced the original FXR platform. It emanates all of the phony charms of the past. 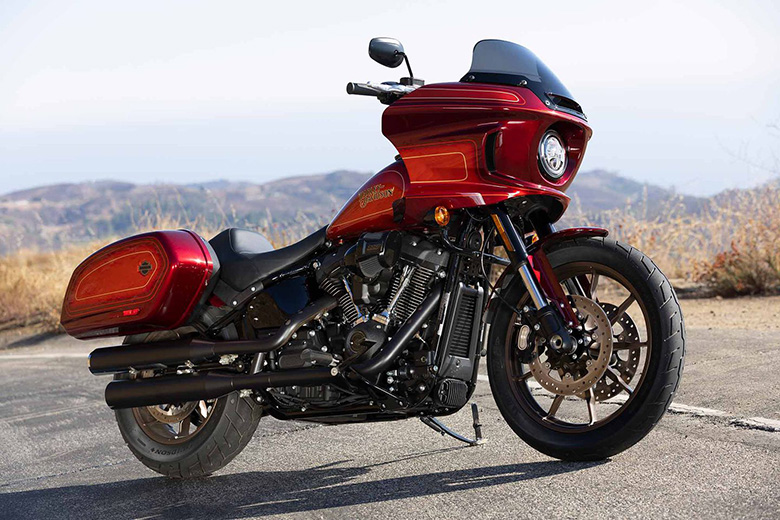 A cut-down front fender also functions as a spoiler for the front fork tubes. It rides on a fixed frame-mount fairing that inspires the preceding FXRT bullet fairing. There are several versions. The fairing vents, which were formerly the auxiliary light recesses outside of the cyclops headlamp, now offer the bike a more customized appearance immediately off the shop floor. The glass has been sanded and tinted as well.

Rockford Fosgate’s audio system now includes a little instrument display. It gives you a large number of songs to share with the class as well as your chosen background music for road journeys.

The blackout therapy is intense. It covers almost everything save the sheet metal components and the engine’s chrome and polished features for added flare.

Because it is a Low Rider, the smashed seat is 28.3 inches above the surface. It sports a single saddle to match its West Coast design.

Although the El Diablo’s small panniers provide 1.9 cubic feet of secure dry storage and are highly elegant, they limit the El Diablo’s utility as a long-distance journey or a large grocery-getter. The bulk is now a Boulevard Bruiser, which will look great at the bar or anywhere you want to stand out. Of course, you could strap a tour package to the rear, but it would negate the designers’ dark-side vibe.

The frame of the Low Rider El Diablo is composed of mild-steel tube pieces that have been welded together, but the rectangular cross-section of the backstrap is what gives the frame its genuine strength. The frame’s old faux-rigid construction sets the mood. 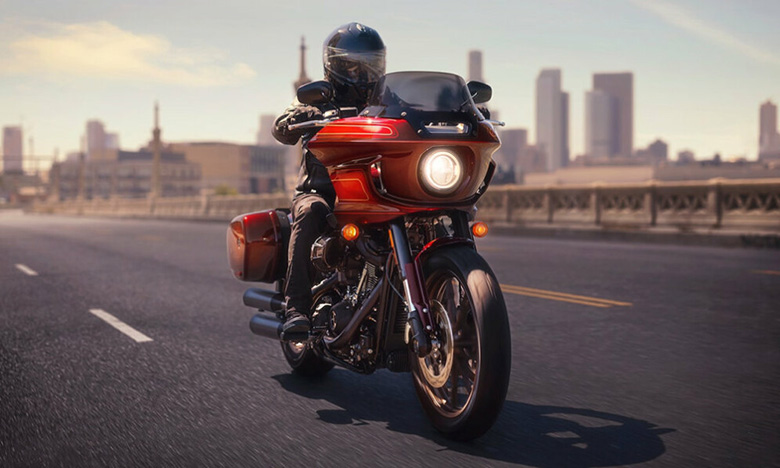 Its robust backbone, like vintage hardtail sleds, generates a continuous downhill slope from the steering head to the pointed swingarm ends. The triangular swing cage, on the other hand, gives a modern ride with 2.2 inches (56mm) of suspension travel. Therefore it is a deceit in this case.

Yes, it is a touch short, but because this is a Low Rider, balance is achieved by employing suspension elements with restricted motion. It does have a maximum safe lean angle of 31.3 degrees, which is regarded to be rather sporty. The only change is to the preload of the rear springs.

This frame is offered with a double-downtube/double-cradle setup. Instead of incorporating the drivetrain into the frame, it fully supports it.

The cast aluminum wheels that complete the rolling chassis are composed of. They use Michelin Scorcher “31” tires in sizes 110/90-19 and 180/70-16, with an “H” speed classification that allows for peak speeds of 130 mph.

A pair of four-bore calipers clamp the 300 mm front discs, while the 292 mm disc and 2-piston anchor take care of business at the rear. ABS is included in the standard equipment package.

The Harley-Davidson Low Rider “El Diablo” comes at $27,999. That is the suggested retail price, so your actual cost will be slightly more, especially if you intend to use the full accessory selection. In the lone colorway, El Diablo Bright Red is layered on top of El Diablo Red Metallic Fade.

Indian makes its debut with a one-of-a-kind, experience-based piece of Americana. The legendary War Bonnet fender ornament is installed at the leading edge of the new high-side front fender, as it has always been. It also features a fixed fairing, although it’s much beefier than El Diablo’s sleek fairing.

Power is comparable. Indian’s entry is powered by a liquid-cooled PowerPlus V-twin engine that produces 122hp and 128lb-ft of torque.

The MoCo is further harmed by India’s lean-sensitive RIDE COMMAND pilot-support electronics, for which The Devil has no solution. After all, it could have, but H-D elected not to provide its RDRS options, so here we are. 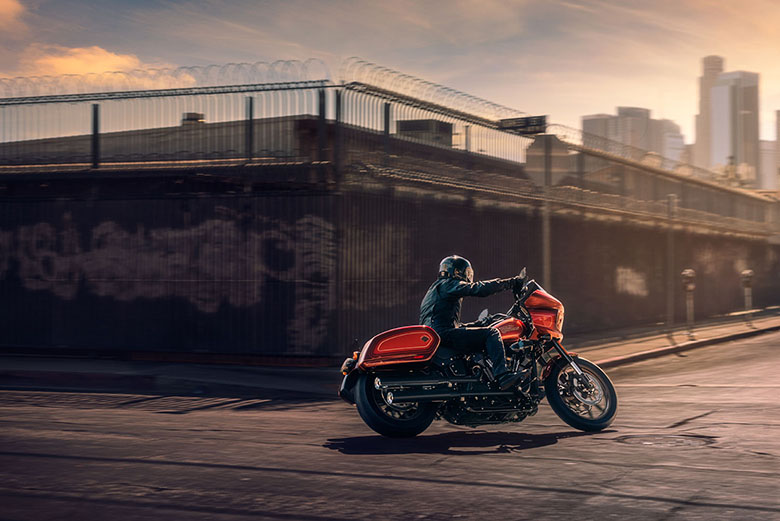 The suspension on both motorcycles is simple throughout, except for the needed rear-end spring-preload adjustability. Indian comes off slightly more proudly at the checkout, with a $28,999 beginning price for the basic colorway at the bottom of the totem pole and a $31,499 price tag on the two-tone variant. A rival seldom outperforms colors, yet here we are. 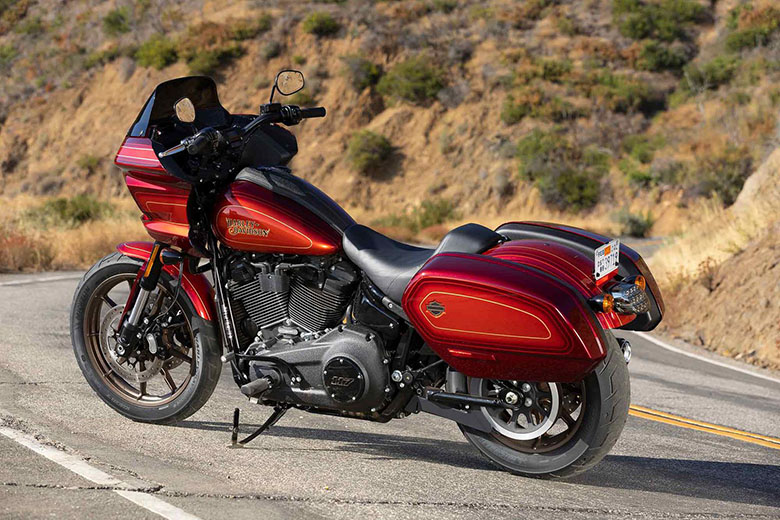