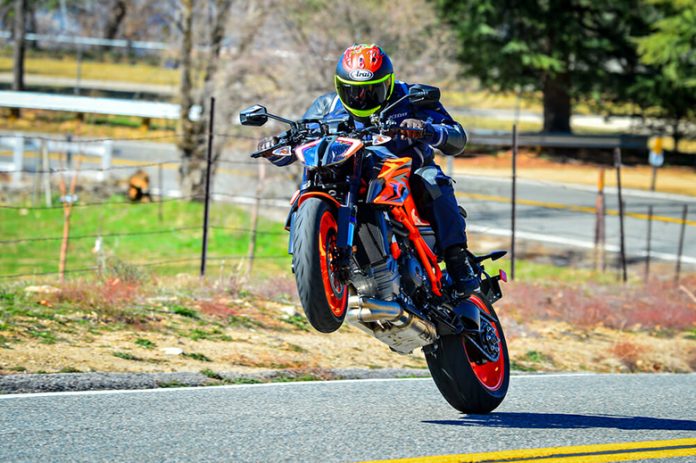 The 2022 1290 Super Duke R KTM Sports Motorcycle needs no introduction, sitting at the top of the hyper-naked food chain and featuring a scary assortment of high-performance chassis and engine characteristics, as well as top-shelf rider improvements and electronics. But we still gave it one. I present The Beast.

The most drastic redesign of KTM’s top-selling street motorbike occurred in 2020, with several modifications and technical upgrades. With a revised LC8 engine, the 2020 KTM 1290 SUPER DUKE R received significant weight reduction. THE BEAST is now among the most technologically sophisticated naked bikes in its class, thanks to an enhanced electronics package. The KTM 1290 SUPER DUKE R has undergone a new iteration for the model year 2022 that provides precisely what riders want. 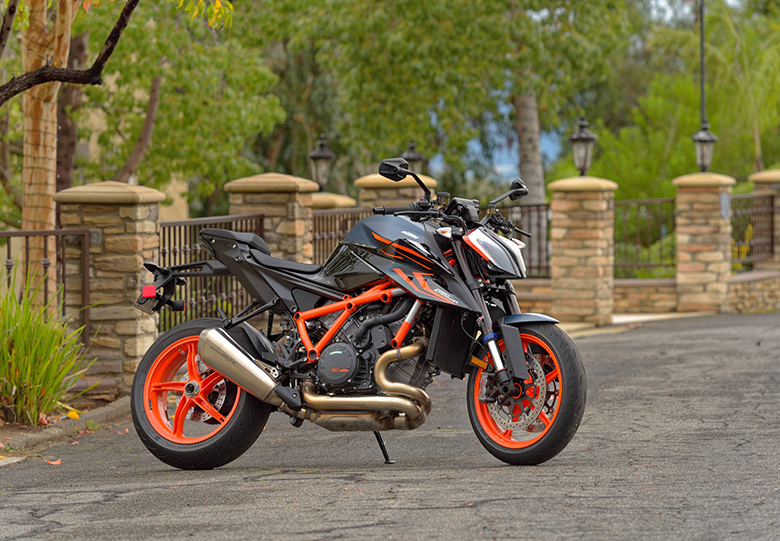 The KTM 1290 SUPER DUKE R has to breathe like a BEAST to operate like a BEAST. This rip-snorting setup optimizes flow by shoving air into the combustion chambers thanks to a ram air inlet placed in the headlight mask. It lowers the likelihood of low air pressure and speeds up fuel combustion. Service is made simple by installing a newly created air filter box that is also simple to reach.

Don’t repair anything if it isn’t broken. But please, make it more aggressive! The 1301 cc LC8 V-Twin has received a modest but significant upgrade, producing 180 horsepower and 140 Nm. This powerhouse, which has been optimized to be lighter while maintaining its torquey nature, is the gold standard in V-twin development. It is the piece that holds THE BEAST together, with engine and linkage mounts that contribute to the overall structure of the package.

A weight reduction of 0.8 kg has been achieved thanks to thinner engine casings and improved water and oil cooler mounts. By doing away with the necessity for a double wall system, a lightweight aluminum oil line has also enhanced oil delivery. A firmer connection is also possible thanks to integrating the engine carrier bracket and linkage mount into the engine case. A 5 mm taller swing arm pivot has also been produced, increasing stability and anti-squat. 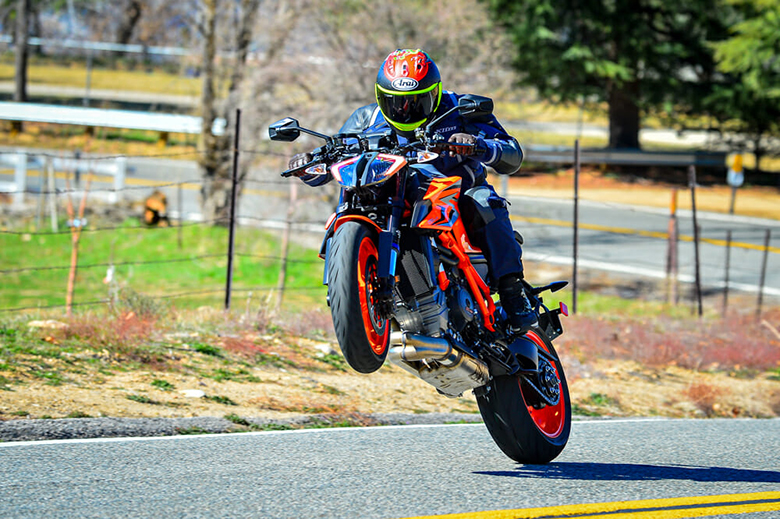 A better air-to-fuel mixture is provided at high rpms via top feeder injectors and 56 mm throttle bodies. More torque and higher fuel efficiency are the benefits across the rpm range.

Significant changes are not always necessary to create big impacts. In reality, we’ve made a few minor adjustments to the PANKL gearbox that have led to speedier shift times, a shorter shift action, and lighter lever modulation. An upgraded spline shaft and all-new bronzed copper coating on the shift forks contribute to smoother shifting. Why do this at all? Put, faster shift times result in more rapid acceleration.

The KTM 1290 SUPER DUKE R’s Ride-by-Wire system goes above and beyond. The ideal throttle valve locations for the present riding circumstances are electronically translated from the rider’s throttle inputs. The days of choking, jolting, and uncontrollable wheelies are over. However, voluntary ones could soon become a thing of the past.

Lighter is quicker when it comes to physics and tearing rifts in space-time. Finding the areas to cut fat is often difficult when dealing with a pure nude BEAST, however. The crankcases have lost some weight due to slight thickness reduction, and when paired with a new water pump and lighter clutch cover, the result is a significant reduction in total weight. 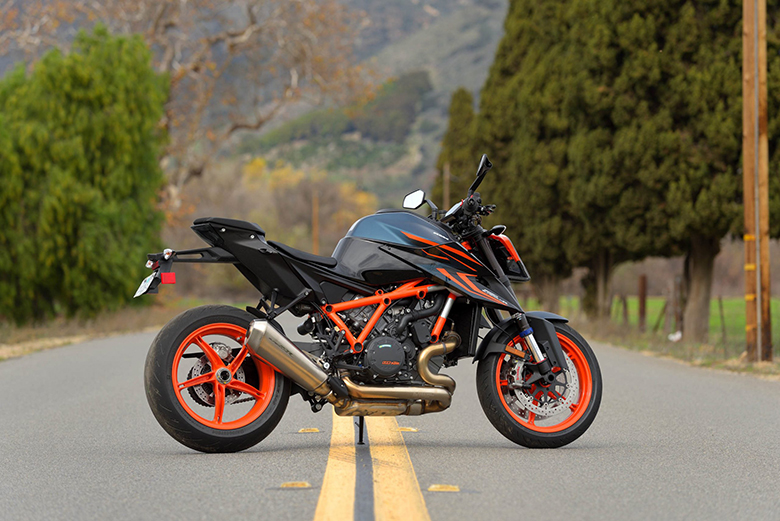 4-piston BREMBO Style Monobloc calipers clamp onto 320 mm floating discs up front, while a twin-piston floating caliper bites a 240 mm disc at the back to control THE BEAST.

The 2022 1290 Super Duke R KTM Sports Motorcycle is three times stiffer than its predecessor thanks to the frame, which leverages the engine to boost torsional stiffness. It makes it possible to ride with ease and assurance, which results in a ride that is ultimately quicker. Optimizing chassis and front tire input are accomplished. The bike’s frame, which uses more oversized diameter tubing with thinner walls, is also where the most weight is saved—it weighs 2 kg less than the previous model.

When it comes to the tail of this BEAST, multi-dexterity is critical. To reduce weight and improve usefulness, a lightweight composite subframe integrates many functions. Without extra brackets or attachments, the passenger seat, license plate holder, and taillights bolt into the subframe structure directly.

The pivot point of the new single-sided swingarm is 5mm higher than the front sprocket for improved feel and traction and more control when using the brakes. A steeper swing arm angle has been accomplished with the engine’s new location in the frame, enhancing anti-squat compared to the previous model. 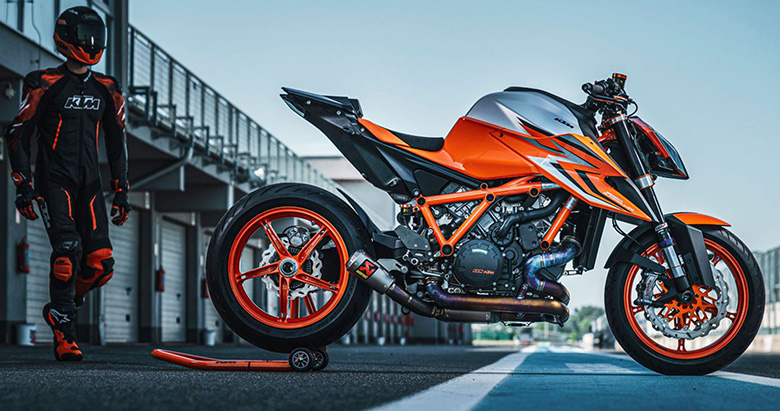 Consider THE BEAST’s suspension components as the muscles that strive to transfer power to the ground as efficiently as possible. Every component has been considered to enhance performance, adaptability, and handling.

These wheels result from a sophisticated CAD system that chooses the ideal form in terms of strength and lightweight; they are not just the product of a designer’s pen. That indicates that these wheels are expertly manufactured down to the last detail, are lighter than previously, and have a superb appearance.

The front and rear BRIDGESTONE S22 tires, measuring 120/70/17 and 200/55/17, respectively, were created especially for the KTM 1290 SUPER DUKE R. They include a fine-particle silica composition that significantly improves traction in wet weather, giving them superb road qualities as well as incredible track performance.

Big lean angles are a given due to the foot pegs’ clever location, which allows for comfort while driving. Two options, however, which raise the pegs higher and farther backward for a more aggressive posture, allow for more modification. For full BEAST MODE track assaults, the gear shift pattern may be readily switched to a 5 down, 1 up configuration. The brake and shift levers are also completely adjustable.

The BEAST’s performance capabilities are without question. However, it does not imply that cyclists must forgo long-distance comfort. The 2022 1290 Super Duke R KTM Sports Motorcycle is a street motorcycle, first and foremost, while it is equally at home on the racetrack. Passenger comfort has been carefully considered and built to accommodate 2-up riding in real-world situations.

It is, without a doubt, the nastiest bike on the street. The distinctive “R” graphics have been applied using a high-quality procedure to guarantee they remain in place and never fade. The contrast between the colors, tones and textures perfectly highlights the muscular contours of the 2022 1290 Super Duke R KTM Sports Motorcycle.

Because there is so little bodywork on the new KTM 1290 SUPER DUKE R, there isn’t much to say about it. But we like it that way! The bodywork and panels, which are aggressive and frightening, have to accomplish two goals: check all the ergonomic boxes and reduce weight wherever feasible. Every board and plate has thus been optimized for thickness and decreased when practical. The attitude was the only thing that remained heavy.

The LED headlamp also functions as a ram air intake. Air is directed between the lights to keep them cool and straight into the air box to promote a more effective burn. The dual functionality produced cleaner, more compact lines and reduced total weight, and a great appearance.

The 16-liter gasoline tank was built of steel to bolster THE BEAST’s haunches. Additionally, the redesigned form and angle were created to assist the rider on the track and the street. 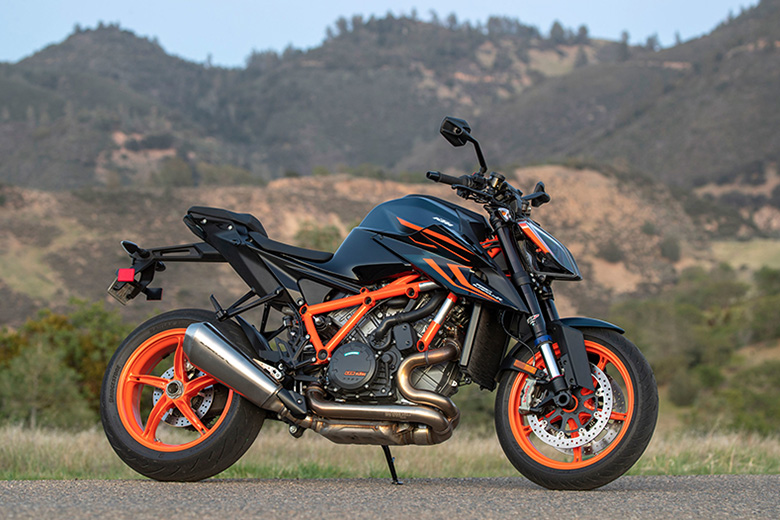