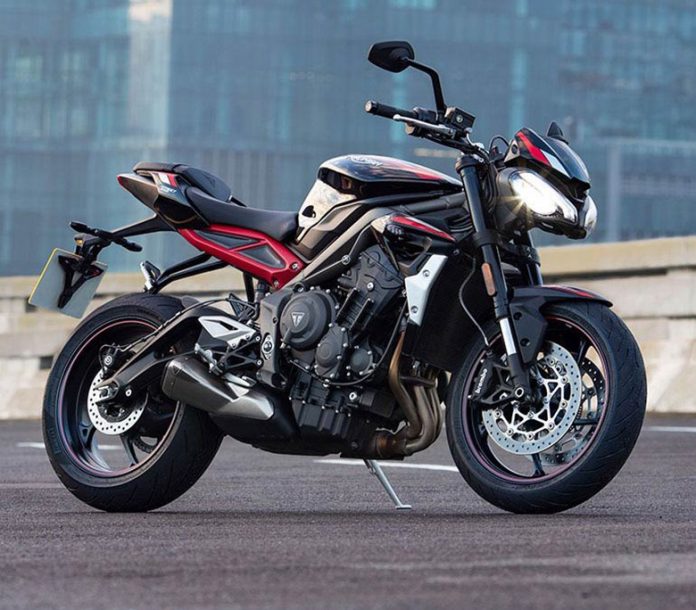 The Street Triple R provides the ideal balance of power and performance for concentrated road riding, raising the bar in implementation, specification, and finish. Four riding modes, angle-adjustable full-color TFT instruments with a 5″ screen, and fully adjustable Showa suspension with Brembo M4.32 radial monobloc front calipers are just a few new features on the ‘R’ model. The revolution begins here, whether you’re tackling urban streets, searching for the right line through twistiness, or nailing apex after apex on a racing track.

The Street Triple’s airbox has been reworked, resulting in a deeper and fuller Triumph Triple roar while accelerating. With less visual impact and less weight, the exhaust system increases both performance and aesthetics. Both the ‘S’ and the ‘RS’ models now have new silencer finishes, with the ‘R’ and ‘RS’ versions getting a sportier-looking silencer with sculpted end caps and a heat shield to improve their performance appearance. 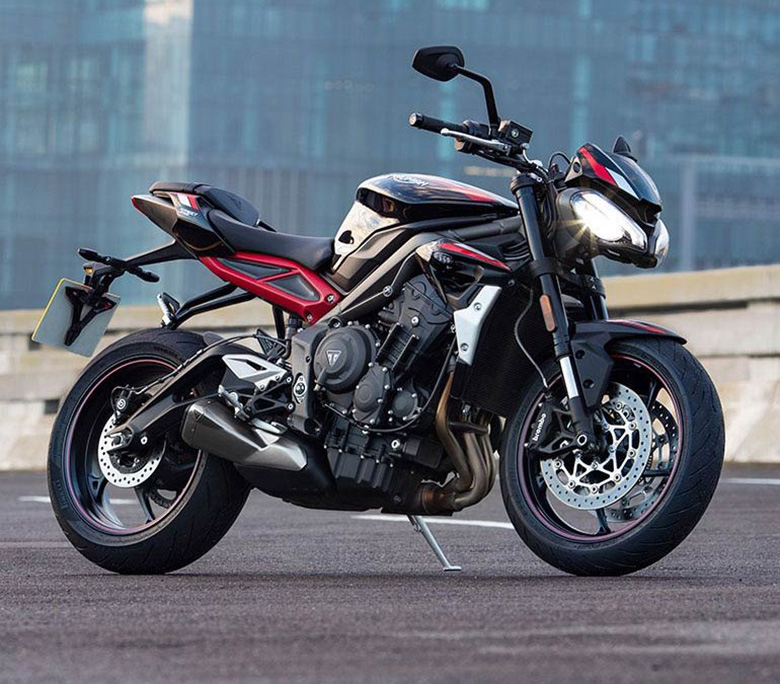 A significant increase in power and torque is provided by the 765cc Street Triple engine, which is derived from the legendary race-bred ‘Daytona’ engine. Performance has been dramatically improved thanks to more than 80 new components including an increase in bore/stroke ratio, a unique cam/piston combination and Nikasil-plated aluminum barrels. The 765cc engines, ECUs, and tunes that come with each of our models are specifically designed to give the character, power, and performance most appropriate for the bike’s riding style and the individual riding style of the rider. Improved acceleration and smoother gear shifts are provided by the new Street Triples’ altered gearbox shape and shorter first and second gear ratios.

Full-color, angle-adjustable, 5″ TFT instrument packs are now standard on the Street Triple R and RS models, providing riders with the latest rider-focused technology from the new onboard computer. The arrangement of the information may be altered by selecting one of three distinct screen display formats.

These are pre-configured for the various riding modes, with the ‘Sport’ and ‘Track’ styles emphasizing the rev counter and new gear position display and the ‘Road’ and ‘Rain’ styles emphasizing the speedometer more prominently. The info tray at the bottom of the screen allows riders to simply and intuitively choose between different styles while riding.

High or Auto contrast may be selected for each of the three types to guarantee that the screen is easily viewable in all weather and lighting circumstances. An inbuilt ambient light sensor selects the best setting automatically. If that wasn’t enough, the new Street Triple RS comes with three more display options, bringing the total to six display options for the rider. The ‘RS’-only lap timer is included in the second set, which has a more dynamic display motif.

The Street Triple S has a completely reworked LCD instrument pack, much like the Speed Triple’s current edition. These modes may be selected when the vehicle is moving or at rest, and the rider can access information from the onboard computer, such as the odometer and the fuel gauge. 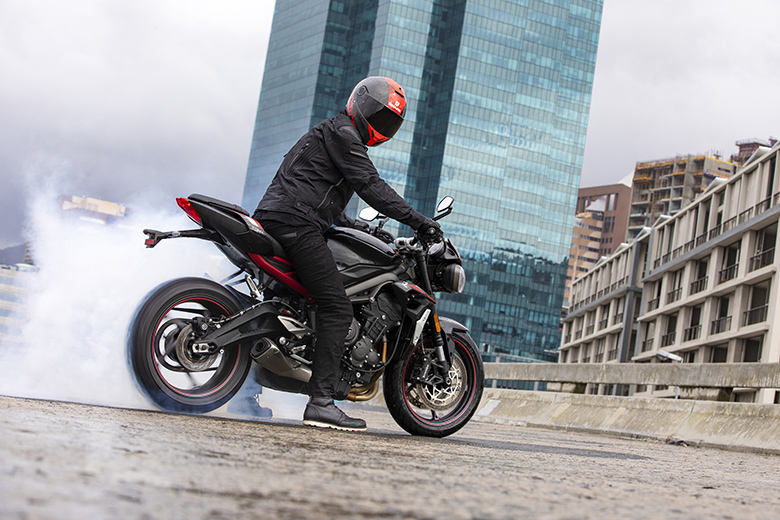 An engineered gullwing swing arm for the Street Triple series provides greater longitudinal torsional rigidity, as well as an engineered decrease in lateral stiffness. Because of this, the Street Triples’ rear suspension has a more natural resistance to compression during heavy acceleration, which increases rider confidence and safety at higher speeds. It results in a more precise chassis behavior that can be sensed on both the road and the track, resulting in a tighter corner exit capability. 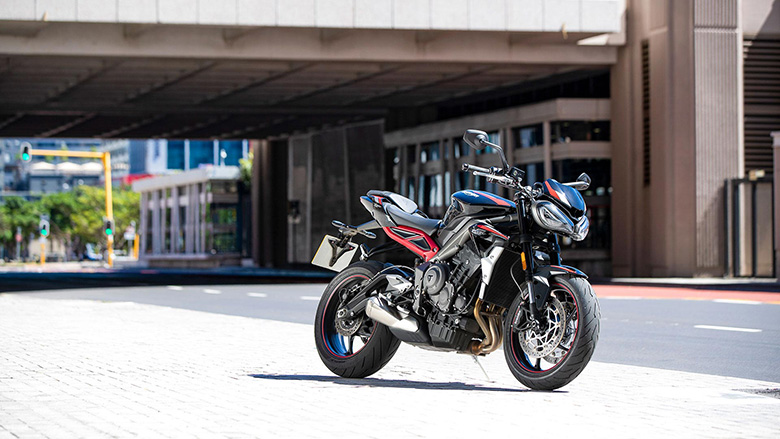 With a genuinely approachable seat height, all Street Triple models retain their reputation for comfort and readability. The Low Ride Height (LHR) version of the Street Triple R opens it up to even more riders. They have improved handling and maneuverability due to reduced weight and increased agility. As the lightest motorcycles in their class, the new Street Triple models are even more agile and nimble than their predecessors. Weight reduction and the new 765cc engine give an incredible power-to-weight ratio that is critical to the game-changing performance of the Streets, giving an exhilarating, elegant, and thrilling ride.

New bodywork, a sportier twin-seat configuration, and the highest degree of finish are all included in the Street Triple series, which enhances the unique and dynamic look of its predecessors with a more “nose-down focused attitude.”

New radiator cowls, redesigned front and rear mudguards, and modified rear body panels are just some of the many improvements to the Street Triple line’s bodywork. Both body-color matching fly screens and an integrated air inlet were created with the riding style. A more aggressive, sharper, and the sportier fly screen is found on the “R” and “RS” variants. When it comes to aerodynamics, the ‘S’ model’s fly screen has a more road-oriented profile. Additional features include a color-coded pillion seat cowl (with removable pillion seat as standard), lower chain protection, and a color-coded belly pan.