The Pikes Peak model in the Multistrada lineup has always been a center of attention for many riders. It is because of its high performing engine and attractive looks. The new 2018 Ducati Multistrada 1260 Pikes Peak is very popular among fans as soon as it hits the market. The Pike Peak has a great heritage of winnings. It has won the International Hill Climb race, which is also known as “The Race to the Clouds”. This race held in a Rocky Mountains and is about 16km west of Colorado Springs. The total racetrack is about 20km long and the ending point is 2,862m above the starting point. It is one of the tough competition in its category and Ducati won it not once or twice but three times.

The 2018 1260 Pikes Peak is developed on the technical foundation of Multistrada 1260 S, this model comes with 1262 cc Euro 4 Ducati Testastretta DVT engine. The new chassis dimensions include new front end geometry and longer swingarm. The race-inspired color scheme of the bike comes as standard while the new forged aluminum wheels, which are lighter than Multistrada 1260 S. Furthermore, the latest Ohlins fork and Ohlins TTX36 shock are attached with the bike. The full review of the 2018 Ducati Pikes Peak Multistrada is given below. 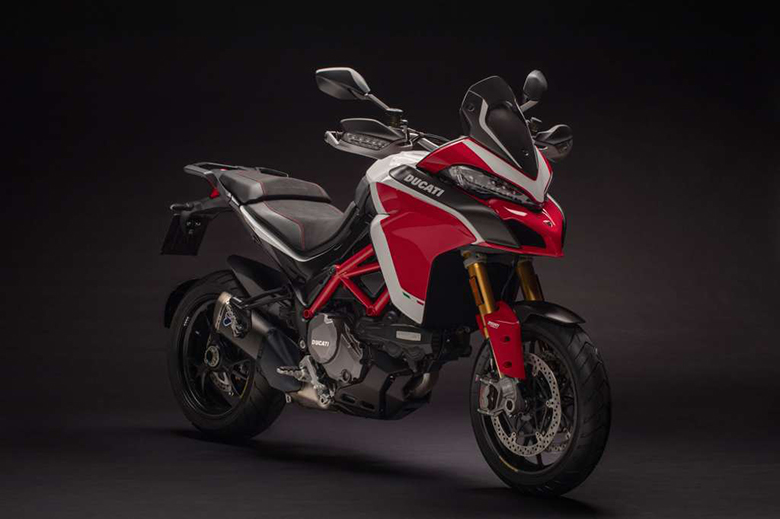 The design of 2018 Multistrada 1260 Pikes Peak is immaculate, stylish and attractive. It brings an unprecedented level of quality and finishing including new side fairing panels to present the front end look sleeker and attractive. The frame offers a perfect balance of weight and performance and it includes the rear aluminum sub-frame and incorporated luggage mounts and ergonomic practical switchgear. The overall motorcycle design is enhanced by five Y-spoke wheels that ensure quality and effectiveness. Like the rear grab handle used in Multistrada 1200, the Multistrada 1260 Pikes Peak also features Touratech aluminum side panniers being offered as an alternative to the plastic panniers. Ducati designers focused on redesigning the under-seat profile to provide more seat height adjustment options. Thanks to their efforts, the Multistrada has got new and better looks with the original number plate holder and LED rear turn indicators.

The Ducati 2018 Multistrada 1260 Pikes Peak can be started without an essential mechanical thanks to the new Hands-Free system that enhances security. When the electronic key is within the two-meter radius of the motorcycle, the motorcycle automatically reads the key’s code, even if it is still in the rider’s pocket. All the rider has to do is press the ‘on’ button to power-up his bike, it will activate the display and allows the engine to be started. An all-new electronic key includes the mechanical flip-key for seat and filler cap removal. There is a steering lock that is activated by an electric actuator. 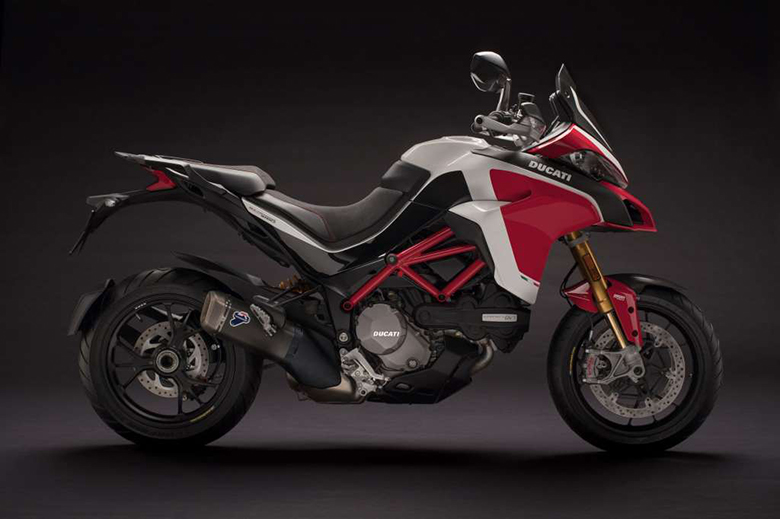 The 2018 Ducati Multistrada 1260 Pikes Peak features one of the most potent and high performing Testastretta DVT 1262 engine. Thanks to the new system that independently varies the timing of camshaft by controlling the intake valves and the camshaft the controls the exhaust valves, the motor provide the high-rpm performance to offer maximum power. The low-to-medium rpm provides smooth operation while making the power delivery smooth and best. The engine gives an outstanding performance while complying with the Euro 4 specifications and providing excellent fuel economy.

The motorcycle has got the powerful 1262 cc engine that sets the new benchmark for performance and readability. The Ducati engineers have developed the new engine that only focuses on a high level of torque delivery at low-to-mid range RPMs. The engine can efficiently deliver 85% of torque at 3,500 rpm, which is 18% higher than the previous models. The Multistrada 1260 offers the highest level of torque output in its class at 4,000 rpm. The most significant displacement was achieved by increasing the piston stroke from 67.9 to 71.5 mm while the bore remains the same i.e. 106 mm. The new connecting rods, including crankshaft and cylinders offers outstanding performance. The DVT system was recalibrated to maximum the low-to-mid-range torque delivery that brings maximum output to 158 hp at 9,750 rpm and peak torque of 13.2 kgm at 7,500 rpm.

The exhaust and intake valves have been redesigned to achieve the highest level of performance. The exhaust pipes were redesigned including the pre-silencer section that has a new inner layout and a new silencer. The original belt covers come with the DVT logo on its metal support. An all-new generator cover is entirely redesigned to accommodate the new and better gear sensor. The gear lever linkage has been changes that features shorter and authentic engagement.

The generator and clutch covers are painted in Mercury Gery color combination that enhances the overall beauty. The total tuneup of the engine has been revised while keeping one thing in mind i.e. better rideability and torque delivery. The engine of 2018 Ducati Multistrada 1260 Pikes Peak contains the new Desmodromic valve actuation system that was made by Ducati’s Bologna-built bikes. This system closes the intake and exhaust valve mechanically and with the same precision as they were opened. The valve actuation offers a clear advantage over traditional valve springs at low revs the system needs less force because there are no springs to be compressed. It makes it possible to maintain the individual valve timing adjuster compact while minimizing their weight.

Moreover, the bike is available with all kinds of technological advancements;

The Ducati 2018 Multistrada 1260 Pikes Peak contains the new frame with a long swingarm. It includes an increasing steering angle of 25-degree while the swingarm of 48 mm gives better riding pleasure and a wheelbase of 55 mm. The new engine’s character and suspension setup give increasing handling experience while it ensures stability when riding two-up at full load having side panniers. The chassis contains the frontal Trellis frame including the large-diameter yet thin tubing and two lateral sub-frame. It is slightly closed to read the load-bearing element that is made up of fiberglass-reinforced plastic for better torsional rigidity. The single-sided swingarm is the single die-cast part with fabricated and welded core section forgive hollow and robust component.

The suspension of Multistrada 1260 contains the Kayaba 48 mm upside-down fork having the dedicated cast bottom bracket with fully adjustable spring preload, rebound and compression. The rear section contains Sachs mono-shock with fully adjustable in compression and rebound. The spring preload is adjustable by using the handy remote manual adjuster. The spring works progressively that gives augmented riding comfort. The Sachs 48 mm of a front fork while Sachs also makes the rear shock absorber. The (Ducati Skyhook Suspension) DSS controls the semi-active suspension systems front and bake. The front and rear suspension contain the wheel travel of 170 mm, which guarantees to have ultimate comfort during the ride.

The motorcycle features the light-alloy five Y-spoke wheels, which is about 340 grams lighter than the ones used in Multistrada 1200. All the Multistrada models are equipped with 3.50 x 17 inches of front wheels and 6 x 17 inches of rear wheels attached with Pirelli Scorpion Trail II 120/70-17 inches tire on the front and 190/55-17 inches on the rear

You need to wear the helmets during ride. 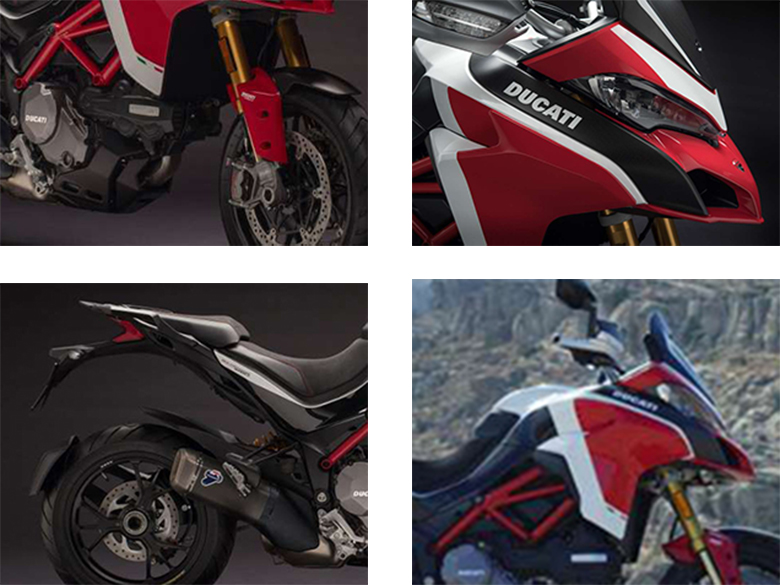 You should use the protective gears during ride.