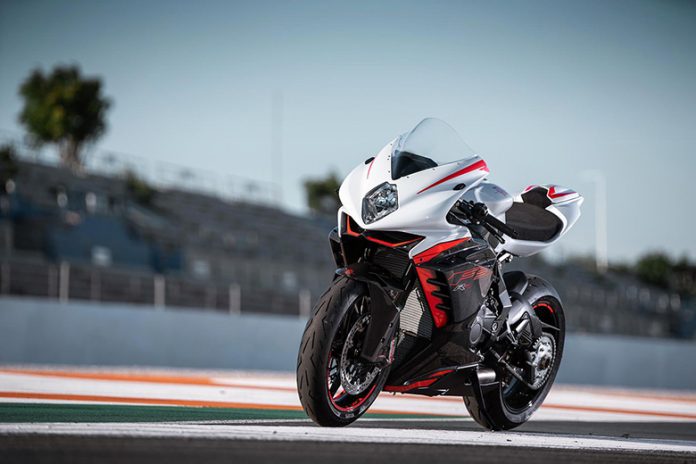 MV Agusta introduces an upgraded and track-focused 2022 MV Agusta F3RR Sports Motorcycle as the World Supersport Championship reveals that 800cc triple-cylinder bikes would be allowed to compete alongside the 600cc four-cylinder bikes.

The bodywork has undergone the most alterations. Aerodynamics have been carefully considered, making the fairing considerably more slippery with intimidating-looking wings that provide 8 kg of downforce at 150 mph. Air is intended to be directed around and over the rider using a bigger screen and redesigned fairing sides. The radiator is designed to be crammed with as much air as possible thanks to the front mudguard. 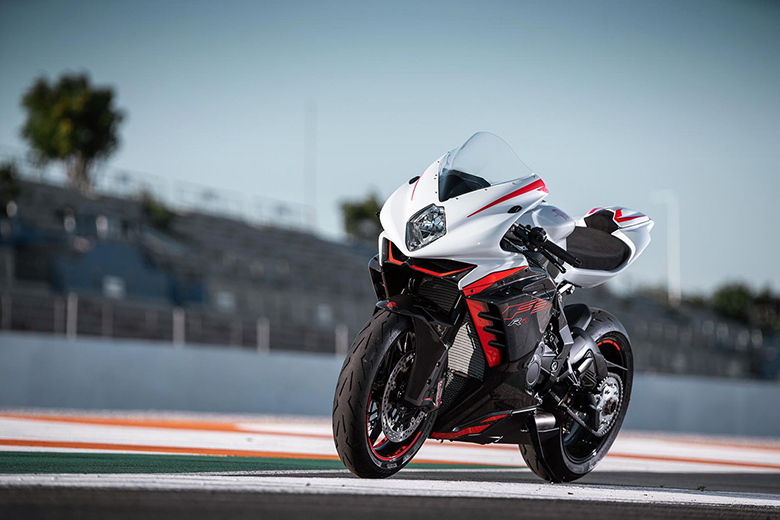 Thanks to updated internal anti-friction techniques, the engine now conforms to Euro5 requirements while still producing a solid 145bhp. A new electronics package from the Italian manufacturer e-Novia, which includes cornering ABS, lean-sensitive traction control, slide control, wheelie control, and launch control, controls all those horsepowers. Even cruise control is available for those lengthy straightaways. Your phone may connect to the dash through Bluetooth as well.

The swing-arm pivot area of the frame has been strengthened, and a new rear wheel has been added that is 7% lighter for reduced inertia. Finally, new anti-slip surfaces have been added to the seat and foot pegs.

A thorough analysis of the F3 RR in the wind tunnel included various aerodynamic components in the fairing. The purpose is to raise the engine’s effectiveness and performance. A weight of 8 kg may be generated on the front section at a speed of 240km/h by the forged carbon fiber extensions on the sidewalls of the fairing.

Feel The Power of Sound

Further improvements to the “Trepistoni” engine have decreased internal friction and improved drivability. It is among the most potent bikes in its class and the most potent bike with an 800cc engine thanks to its 147 horsepower. The motorcycle can rotate at very high speeds thanks to the titanium valves. New, redesigned crankshaft main bearings have less inertia and friction. 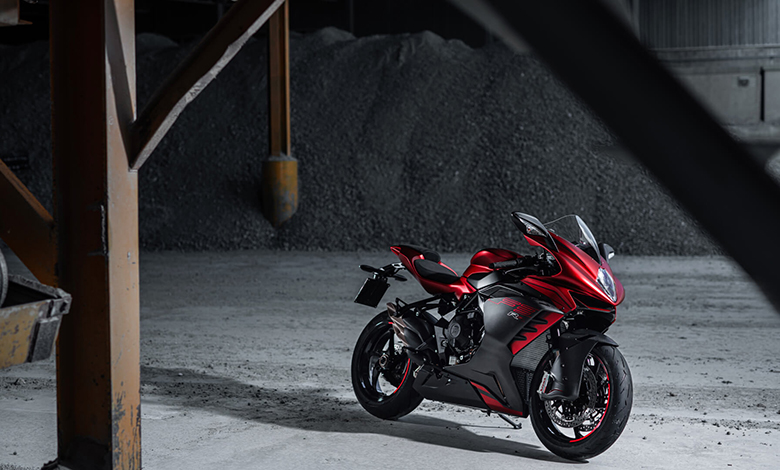 The 5.5′′ TFT panel instrumentation that can communicate with the famous MV Ride app serves as the bike-rider interface. Take advantage of turn-by-turn navigation, record and share travels, and configure the bike right from your smartphone—everything is at your fingertips. A handy joystick on the handlebars makes it easy to navigate the setup panels.

Controls, ECU firmware, and the dashboard all connect to the ABS. The F3 RR’s electronics make a significant improvement. The introduction of a new IMU inertial platform, created and produced mainly for MV Agusta, enables the accurate regulation of all controls following the lean angle by reading the bike’s location in space.

The MV Agusta F3 RR is a bike that performs and is incredibly complete. Since everything can be improved, the customer is given a chance to customize the stock MV Agusta F3 RR and turn it into a one-of-a-kind motorcycle using a special kit that includes extra CNC-machined parts (like a fuel cap, brake, and clutch levers), as well as a seat cover that converts the bike into a single-seater. The Akrapovic titanium exhaust, which comes with a specialized control unit and increases the power to 155 Hp while lowering the weight from 173 to 165 kg, is the actual star of the package (dry).

The traction control TC may react more accurately since it also considers the bike’s angle. At the same time, the Continental-supplied ABS is fitted with a handy cornering function, a safety measure. The improved front lift control FLC can now control a controlled wheelie for pleasure and performance thanks to the IMU. 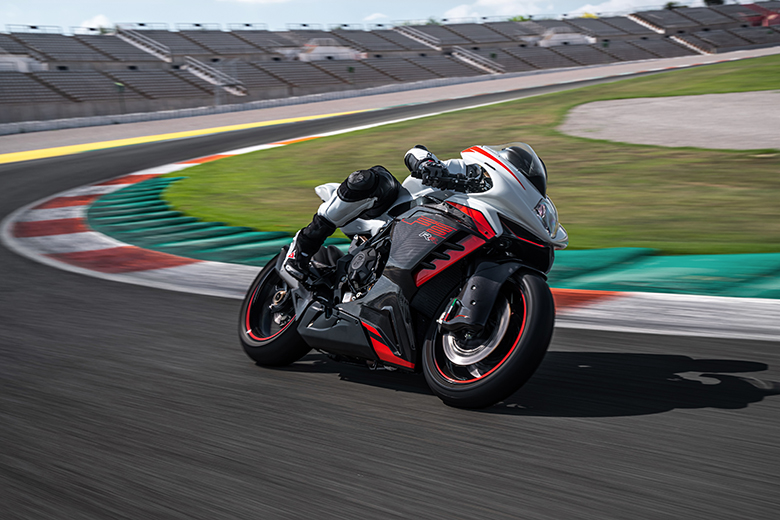 If you want to invest extra money, a racing package includes an Akrapovic exhaust and race ECU, increasing power to 151 bhp. There is currently no information on the US price, but I don’t anticipate it to be cheap! 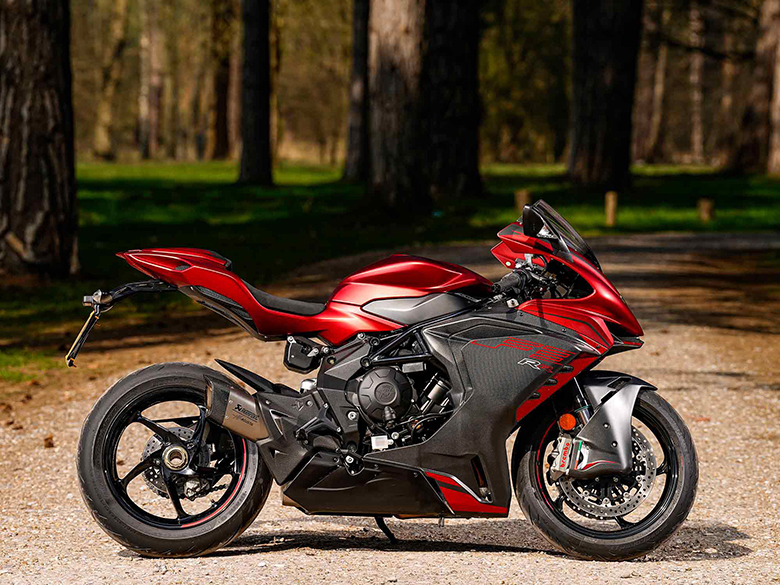 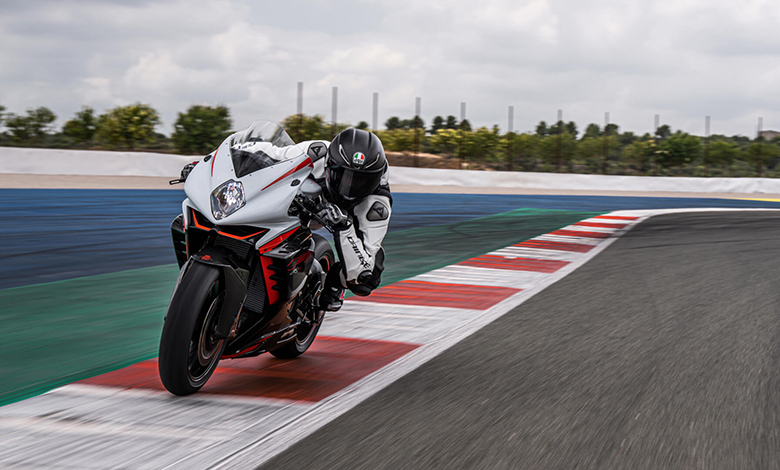