It’s popular with riders wishing to upgrade from a smaller machine since it instills the pleasure of sports bike possession into every ride while still delivering reasonable operating expenses, making it a fantastic bike to commute on during the week and enjoy on the weekends. It has also favored experienced riders who want to minimize their equipment while still enjoying the spirit of fun riding.

The CBR500R received sharper design and LED lighting in 2016, along with front suspension changes; in 2019, it received an even more aggressive makeover, with a revised shape and riding posture indicating a keener racing aim. The engine was upgraded to provide better performance off the bottom, a powerful surge through the rpm range to the redline, and a unique howling sound. 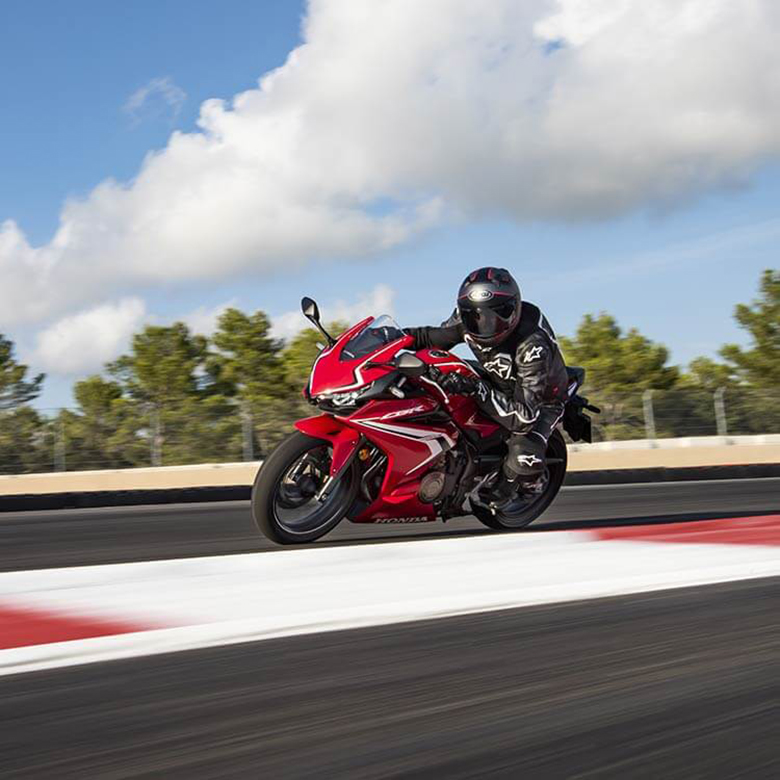 The CBR500R is every bit a CBR, which means it’s one of our sharpest tools. For high-speed stability, its quick, aggressive lines include distinctive aerodynamic winglets. With clip-on handlebars set below the top yoke and a negative-display LCD dash, the front vision is pure sports. The revolutionary fuel tank design is meticulously designed to reduce excessive weight while providing an acceptable cruising range.

The CBR500R has a strong twin-cylinder engine that provides flexible, pleasurable power. You’ll never have to pick between a bike that accelerates quickly from a stop and one that can take you on a thrilling pursuit through the smooth six-speed transmission at high rpm. The CBR500R provides both. It is what it means to be free. 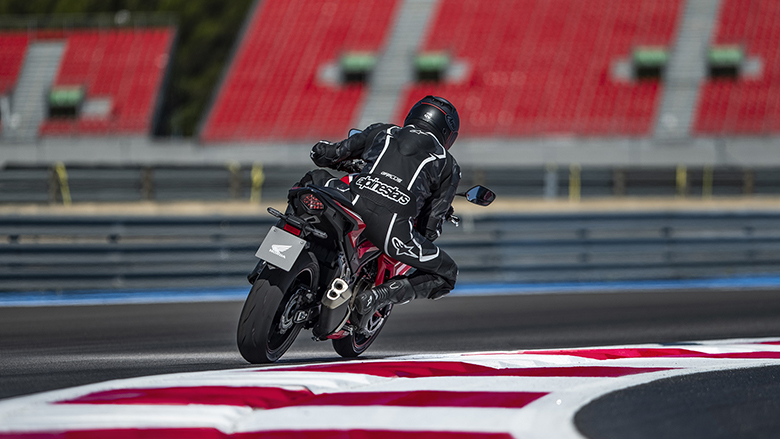 An Assist/Slipper clutch, like its bigger CBR brothers, eases upshifts and avoids rear wheel lockup on severe downshifts. To make the ride even more exciting, powerful mid-range torque between 3,000 and 7,000 rpm makes every corner exit a memorable experience.

Fully equipped and Ready to Ride

The 2021 Honda CBR500R ABS Sports Bike has a negative-display LCD dash with indications for Gear Position and Shift Up. When negotiating a problematic series of turns, the handlebars clip below the top yoke, letting you keep complete control. The spring preload on the 41mm telescopic forks and the Pro-Link rear monoshock are also adjustable. A premium finishing touch is a full LED illumination, including indicators. Ready. Set. GO.

The CBR500R’s completely faired appearance was made more aggressive for 2019 with straight, wedge-like feature lines and enlarged lower fairings that emphasize a genuine sensation of speed. To enhance ergonomics and mobility, the rider’s seat pad and seat unit, as well as the top and side fairings, were shortened. Sharply chiseled twin LED headlights, complementing the LED indicators, glare menacingly forward.

The front perspective from the CBR500R’s cockpit is pure racing. The handlebars clip on under the sporty top yoke, resulting in an unmistakably sports bike riding position; the fairing is also positioned low, giving the rider the control and stability for which Honda sports motorcycles have long been renowned.

The LCD instruments include a Gear Position and Shift Up indication, set to 8,750rpm by default but can be modified in 250rpm increments between 5-8,750rpm. 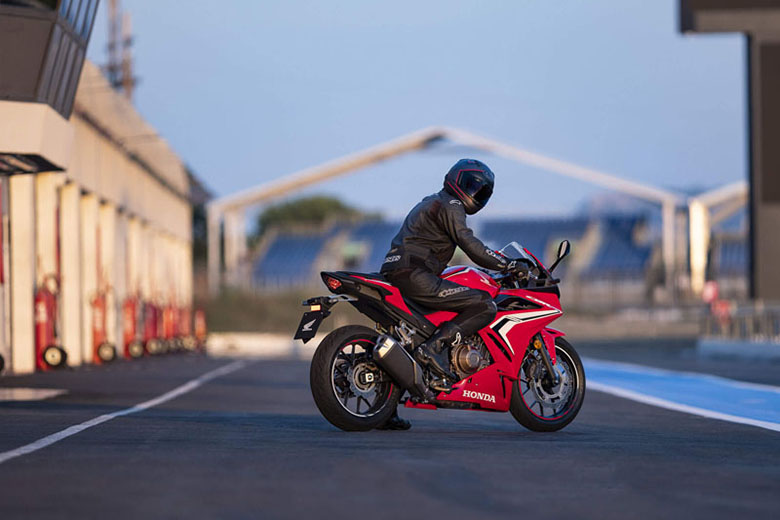 The mainframe’s 35mm diameter steel diamond tube is both light and sturdy, with a regulated degree of yield that provides enough input to the rider as road conditions vary. The overall design and location of the engine mounts, as well as the rigidity balance of the frame, all help to prevent vibration.

The wheelbase is 1410mm, and the rake and trail are calibrated at 25.5°/102mm for agile but confident handling. With the engine near the swing arm pivot point, mass centralization provides turning agility, while optimal front/rear weight balance maintains stability. The curb weight is 192 kg.

The CBR500R’s seat height is low at 785mm, making it extremely simple to handle, and its riding posture easily fits riders of all sizes. The dimensions are 2080mm x 755mm x 1145mm, with a ground clearance of 130mm. The gasoline tank features 17.1L, including reserve, which, when paired with the engine’s excellent fuel efficiency, results in a 480km range (over 260 miles).

The Honda CBR500R is available in the following colors:

The internal construction of the lively twin-cylinder engine unit is similar to that of the 2019 CBR1000RR Fire blade.

The 2019 engine modifications saw quicker acceleration with a gain in low-to-mid-range power and torque in the 3-7,000rpm range, with a 4% improvement coming from revised valve timing – with ‘close’ timing accelerated by 5° – and lift raised by 0.3mm to 7.8mm.

A more-or-less stream of airflow feeds the PGM-FI fuel injection via the air box and throttle bodies – the battery was re-positioned farther away from the back of the air box intake duct to allow for additional airflow in the 2019 update. The exhaust muffler has multiple exit pipes, giving each pulse a lively sound. Peak power of 35kW is provided at 8,500rpm, with a torque of 43Nm supplied at 7,000rpm.

The bore and stroke measurements are 67mm x 66.8mm, respectively, and the compression ratio is 10.7:1. The crankshaft pins are phased at 180°, and the main couple-balance is located behind the cylinders, near the center of gravity. Scissor gears are mainly used in primary and balance equipment to reduce noise. The crank counterweight is principally designed for couple-balance, and its modest weight enables the engine to spin freely with less inertia.

The engine acts as a stressed component, supplementing the frame’s strength with four frame hangers on the cylinder head. Internally, roller rocker arms are used; shim-type valve adjustment enables them to be light, resulting in decreased valve-spring load and less friction.

To lessen piston ‘noise’ at high rpm, the piston form is modeled on those used in the 2019 CBR1000RR Fire blade. Striations on the piston skirt minimize friction (a finish that increases surface area, introducing gaps in which oil can flow for better lubrication). As with the CBR1000RR, an AB 1 salt bath technique formed a protective oxidization membrane following isonite nitriding.

The ‘triangle’ proportion of the crankshaft, main shaft, and countershaft is remarkably similar to that of Honda’s four-cylinder RR engines. Most internal construction and engineering are directly drawn from the 2019 CBR1000RR.

Centrifugally cast thin-walled sleeves are used in the crankcase; their internal design eliminates ‘pumping’ losses that may arise with a 180° phased firing sequence. The oil pump has better aeration performance and lowers friction; a deep sump lowers oil movement during vigorous cornering and braking. The oil volume is 3.2 liters.

The gearbox of the CBR500R is highly similar to that of the RR, with identical gear change arm construction and link system. An Assist/Slipper clutch, introduced in 2019, allows for lighter shifts and smooths any harsh downshifts. 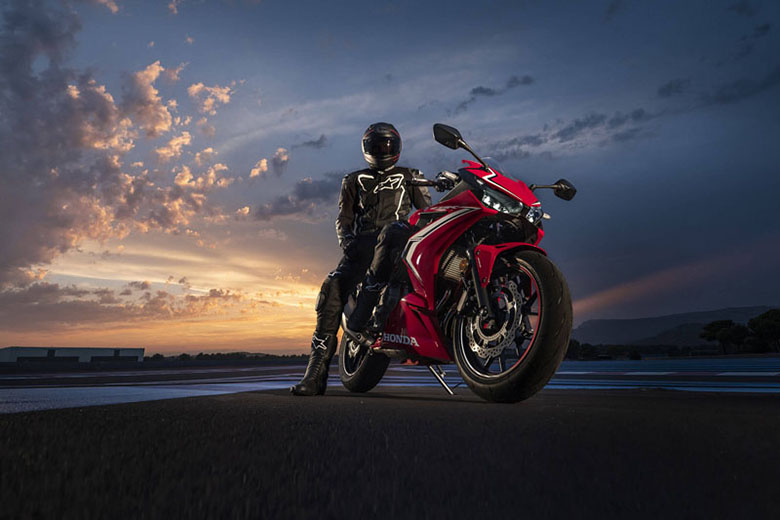 The CBR500R, like its 500cc stablemates, is homologous for EURO5, which established much more rigid engine emissions rules on January 1, 2020, than EURO4. These criteria include significant reductions in allowable carbon monoxide emissions, a 40% reduction in total hydrocarbon emissions, more stringent misfire detection, and implementation of a particulate matter restriction. 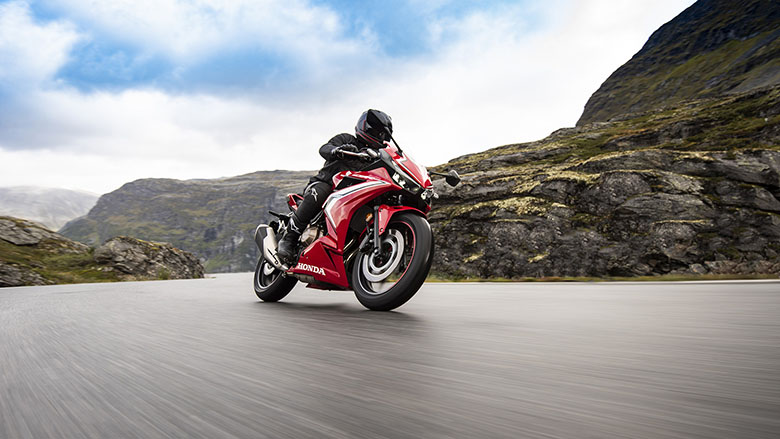 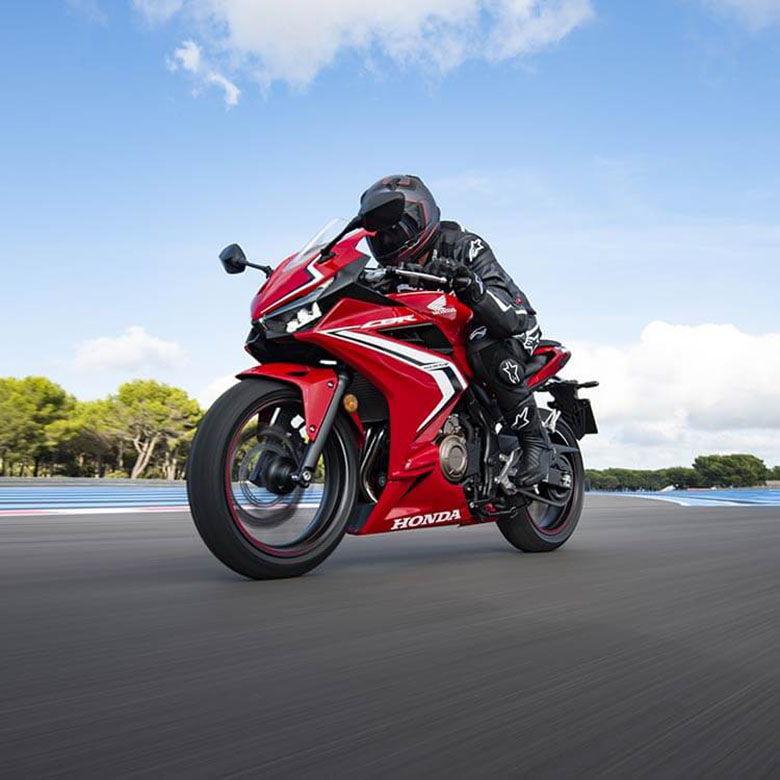