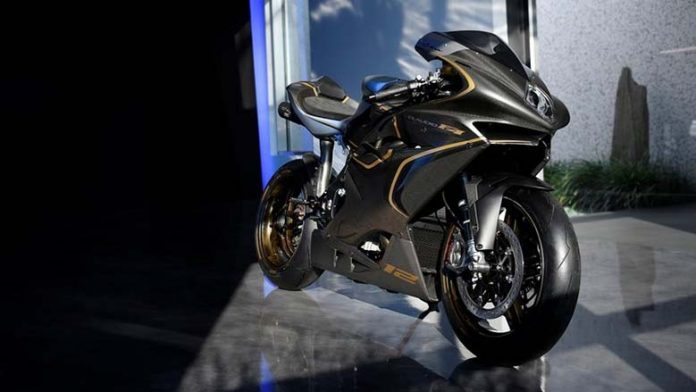 The new 2019 MV Agusta F4 Claudio Powerful Sports Motorcycle is the culmination of a surprising story, an accomplishment capable of radically changing the sports motorcycle concept itself. It is a product of Massimo Tamburini’s flair and Claudio Castiglioni’s insight; the F4 was presented to the public in 1997, instantly becoming the world’s best-looking motorcycle. The launch of the new 2019 MV Agusta F4 Claudio Powerful Sports Bike marked a triumphant return for MV Agusta, a motorcycle brand that has won more world championship trophies than any other.

The legendary MV Agusta F4 Claudio pays homage to a legendary man who dedicated his life to the perfection and modeling of motorcycles, first in his mind and then in the workshop. In short, the new 2019 MV Agusta F4 Claudio Powerful Sports Motorcycle is an ultimate achievement, and indeed a dream comes true.

According to Claudio Castiglioni, bikes are objects that make people dream. They have different sounds, colors, and graphics that reveal the inspiration of those who imagined them. Sometimes these creations are true riding works of art that transform the designer into an artist.

The new 2019 MV Agusta F4 Claudio Powerful Sports Bike is available in a limited edition of 100 models only.

The technical foundation is offered by F4 RC, the extreme racing-derived offshoot of the F4 project. It shares many features seen on the MV Agusta that competes in the World Superbike Championship; this motorcycle is built to perform. 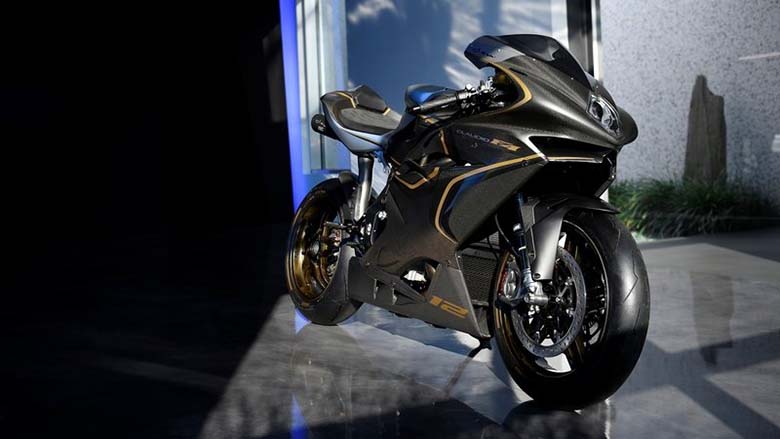 The rev-limiter is set at 14,200 rpm, and titanium con-rods offer the best possible strength-to-weight ratio. The new crankshaft has been specifically balanced and lightened for the Corsa Corta power unit that bristles with original design features like a perfectly balanced central timing chain and radially-set valves in the combustion chamber. Thanks to the motorcycle configuration for the track, the maximum power is 212 hp at 13,450 rpm with torque reaching 115Nm at 9,300 rpm. This extreme configuration also sees the F4 Claudio mount the dual exit titanium SC-Project racing exhaust with the dedicated control unit. Thanks to the standard road-legal set-up, maximum power still touches 205 hp.

The new 2019 MV Agusta F4 Claudio Powerful Sports Motorcycle also boasts an MVICS (Motor and Vehicle Control System) that is developed by MV Agusta engineers and used in various configurations throughout the range with eight unique injectors, a lower bank of four Mitsubishi injectors and an upper tank of four high-low Magneti Marelli injectors. The Eldor EM2.0 engine control unit oversees the Mikuni entire Ride-by-Wire throttle body and the ion-sensing pencil coils for knock and misfire detection. Variable-height intake horns including TSS (Torque Shift System), have been completely designed to make the most of engine power and torque delivery across the entire rev range. Many features have been developed by Reparto Corse, especially for the F4 Claudio. For example, head intake/exhaust ports have been revamped to improve fluid dynamics, DLC-treated cam followers reduce friction to offer more power. The friction containment has also been extended to other moving parts like the piston with Asso comparison rings.

To make the transmission of the 2019 MV Agusta F4 Claudio Powerful Sports Motorcycle more efficient, the bike comes with STM multi-plate oil bath slipper clutch actuated by a Brembo radial-pump. It is a six-speed constant-mesh gearbox that is removable and the latest version of the F4 has a DLC treated shift forks that augments hardness and reduces the coefficient of friction.

The electronic draw on MV Agusta’s long-standing race experience in the World Superbike Championship. Four different engine maps can be selected instantaneously via the racing push-buttons exclusive to the MV Agusta F4 Claudio. These modes are;

The electronic up and down MVEAS 2.0 gearbox is mounted as standard. 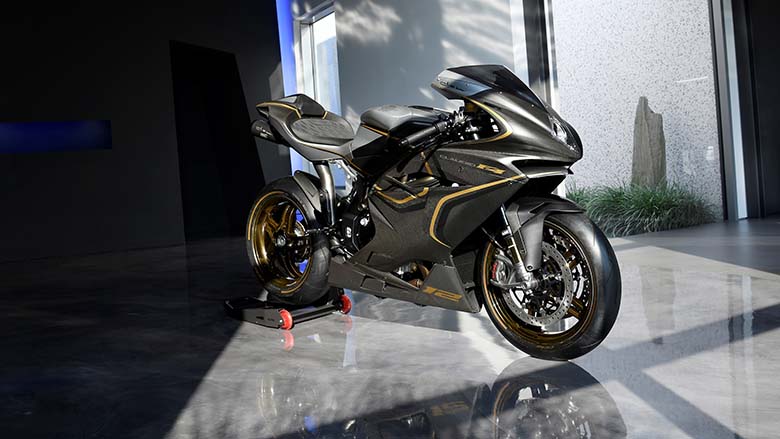 On the MV Agusta F4 Claudio, research into materials has been taken to its ultimate level. The new titanium, carbon fiber, and light alloys are used extensively, keeping weight down and enhancing aesthetics. The fairing is made up of carbon fiber and it is designed for patterning alternates gloss and matt-finish areas. The design is enhanced by a golden trim consisting of electro-plated copper. At the same time, the front upper fairing side panels, lower cowl and rear seat cowl denote masterful use of carbon fiber as do the unbeatable racing-grade BST Rapid Teck wheels.

The SC-Project exhaust silencers contain the laser-engraved Claudio, made in titanium is supplied in the racing kit. There is another eye-catching feature that is the CNC-machined rear under a crown.

The titanium has also been used in the bolts and screws. In contrast, the CNC-machined aluminum alloys are used extensively on functional components like triple clamps, the new height-adjustable rider footpegs, the nut holding the rear wheel, the brake, and the clutch levers, the new clutch and brake fluid reservoir plugs and filler cap. The cross-stitched rider seat with embroidered Claudio logo gives the F4 Claudio added individuality.

The braking system comes with cutting-edge technology by Brembo that is the global industry leader and is available for the highest-end models. A pump actuates the new Brembo Stilema 4-piston Monobloc radial calipers. The two front discs use Brembo Racing technology with the T-Drive system including steel braking rotor and aluminum flange.

The rotor is mounted to the carrier using the T-pins which gives a unique design that transfers braking torque more effectively while refining thermal and mechanical resistance. The T-Drive provides the disc with full-floating action in radial and axial directions and decreases its overall weight. The first MV Agusta F4 introduced a mixed-structure frame i.e., an all-new CrMo tubular steel trellis section and two aluminum alloy plates. It is the same solution incorporated into the F4 Claudio, which is the combustion of a highly original concept and style including the undisputed effectiveness that stems from the outstanding stiffness.

The plates have an attachment pin for the aluminum alloy single-sided swingarm that offers 120mm of wheel travel. The new top-drawer Ohlins shock absorber provides maximum performance on both track and road.

The USD NIX 30 TiN-coated 43mm diameter fork features separate manual adjustment for rebound and compression, and it also allows adjustment of spring pre-load. Additionally, the fork on the motorcycle features exclusive styling in the form of black sleeves that has similar adjustments that can be made on the TTX36 shock absorber with piggyback reservoir. 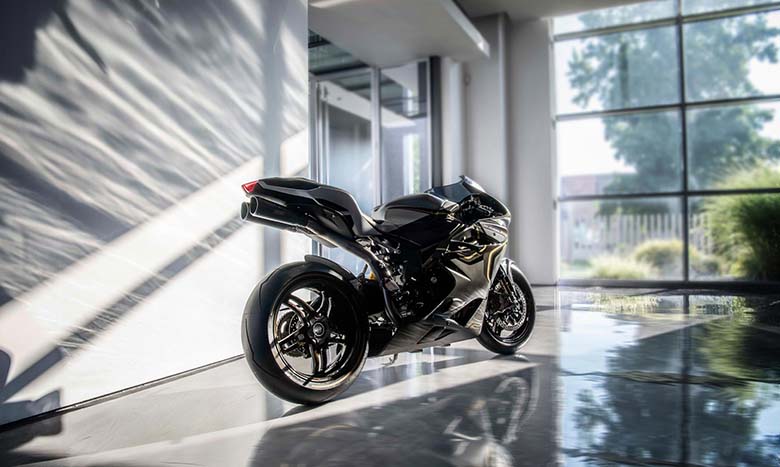 The motorcycle comes with Pirelli Diablo Supercorsa tires of 120/70 ZR17 at the front while 200/55 ZR17 at the rear offering perfect riding pleasure. The model comes with a wheelbase of 1430mm, fork yoke offset of 100.4mm and a seat height of 830mm. The fuel carrying capacity is 17 liters with a dry weight of 183 kg in the standard configuration and 175 with the SC-Project exhaust and dedicated control unit.